Artist Toshiko Takaezu (1922-2011) had a career that spanned six decades. Now best known as a studio potter, she also worked in fiber, paint and bronze. Her porcelain and stoneware creations, offered through galleries during her lifetime, are now achieving extraordinary success in the secondary auction market.

In a recent interview, Garth Clark of the Cowan’s+Clark+Del Vecchio ceramics sales in Cincinnati, said: “She was a force during the 1950s, 1960s, 1970s – right up until she passed away. Her work – once she established a look – remained very consistent: bulbous forms with tiny mouths at the top. In a way, the real individuality was in her glazes and glaze painting. She’s Hawaiian, so she grew up in a melting pot of cultures. She was very much influenced by Japanese culture in general.”

Takaezu’s parents had moved from Okinawa to Hawaii. A member of a large family, she grew up in a rural setting on the island of Maui. At one point, she accompanied her mother and a sister to Japan, where she spent some time in a Buddhist monastery. After art school at the University of Hawaii, she studied at the Cranbrook Academy of Art in Bloomfield Hills, Mich. (1951-1954), with Finnish ceramist Maija Grotell. She went on to teach at the Cleveland Institute of Art (1955-1964) and Princeton University (1967-1992).

In her studio in Quakertown, N.J., she created some of her best mature work. The nearby Hunterdon Museum in Clinton presented a comprehensive exhibition “Toshiko Takaezu: At Home” in 1998. Travelers can find examples of her ceramics in many permanent collections from the Metropolitan Museum of Art in New York City and the Renwick Gallery in Washington to the Honolulu Museum of Art and the National Museum of Modern Art in Kyoto, Japan.

Clark continued: “In terms of the market, she has been extraordinarily resilient. The collecting of her work has been very active. Most people thought, because she was so productive, that – after a bit – the market would go down, without her very big personality there to keep things going. But she has turned out to be one of the most sought-after potters of her era.”

“She did some enormous works, particularly toward the end of her career. She had a couple of shows at the Charles Cowles Gallery in New York at the end of the 1990s, where she produced forests of giant pots. Her most collectible work tends to still be in a medium range of anything from 5 to 25 inches – that’s the work that is most popular. An electric cobalt blue is one of her distinctive glazes. She has a very wide palette of glaze color and texture, but the cobalt blue gets collectors going and is most desirable.”

Takaezu was surrounded by an enthusiastic circle of friends and supporters during her lifetime. In addition to exhibition catalogs, there are several well-illustrated books, which allow collectors to see the range of her creativity. Toshiko Takaezu: The Earth in Bloom by J. Stanley Yake, presents beautiful images of the artist and her work. He became acquainted with her at Skidmore College where she made many of her larger sculptures.

Yake quotes her as saying, “In my life I see no difference between making pots, cooking and growing vegetables. They are all so related. However, there is a need for me to work in clay. It is so gratifying and I get so much joy from it, and it gives me many answers in my life.”

Another volume, The Art of Toshiko Takaezu: In the Language of Silence (2011), edited by Peter Held, offers a scholarly analysis of Takaezu’s life work and includes essays by Paul Smith, director emeritus of the American Craft Museum, and Janet Koplos, former senior editor of Art in America. Jack Lenor Larsen, an internationally known textile designer, author and collector, provides a foreword.

Held is Curator of Ceramics at the Ceramics Research Center, Arizona State University Art Museum at Tempe. He noted in his introduction, “She never deviated from her overriding vision: using monolithic shapes and a simplicity of form and surface treatment to make tangible connections with a broad audience at a primal level. Their authority reveals her clarity of purpose and a humanness evoking a range of emotion.”

“Some interpret them as koans, objects that defy rational thinking or materiality, that hold the power to influence how one perceives the world, and that can spark enlightenment and personal fulfillment. Living in a culture that embraces rapid technology and change, Takaezu highlights the ordinary with her art, by meditation on the nuances of the everyday in fine detail.”

A sign of the potter’s current market strength was an extraordinarily tall moon pot (43 inches high), marked “TT” that sold at Leslie Hindman in Chicago on May 2 for $19,250, well beyond its $4,000-$6,000 estimate. The sculpture featured a shaded black glaze streaked with cobalt. The good news, however, is that many other moon pots in subtly varying shapes and colors sell at auction for less than $5,000. Small utilitarian pieces, such as tea bowls and plates, can be purchased for several thousand dollars.

Speaking to collectors, Garth Clark adds a special note in conclusion: “The reason why her work does so well is that, if you buy 20 pots of more or less the same form but different sizes and put them together on a table, it is just ravishing. With her pieces – because the form is very similar but the scale or color varies – you can create these thrilling tableaux.”

In an evocative photo taken over a decade ago, potter Toshiko Takaezu walks among a group of her larger works, which seem to have sprung from the earth. Photo by Tom Grotta. 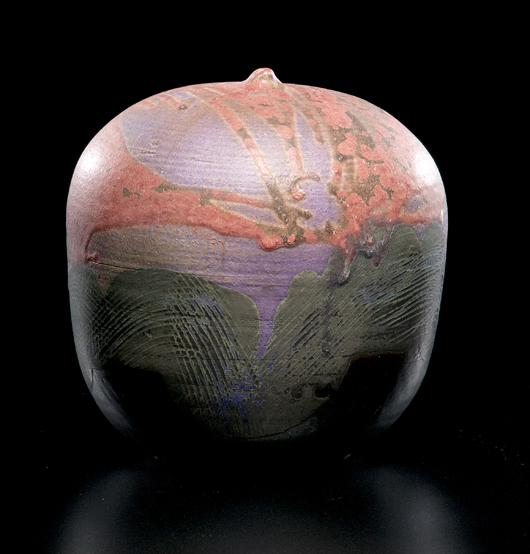 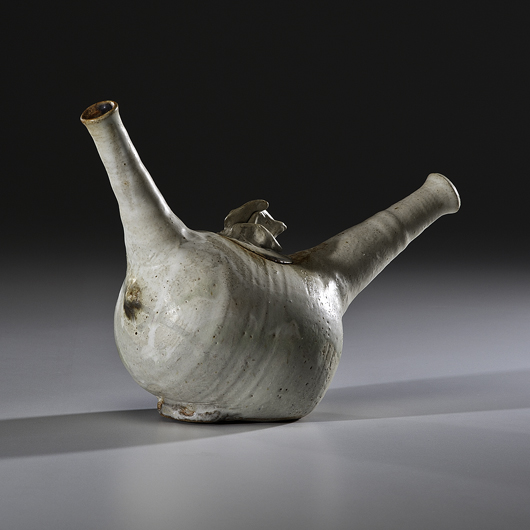 Takaezu experimented with unusual forms; a double-spouted teapot, circa 1956, sold for $1,762.50 at Cowan’s in June. Courtesy Cowan’s+Clark+Del Vecchio Auctions. 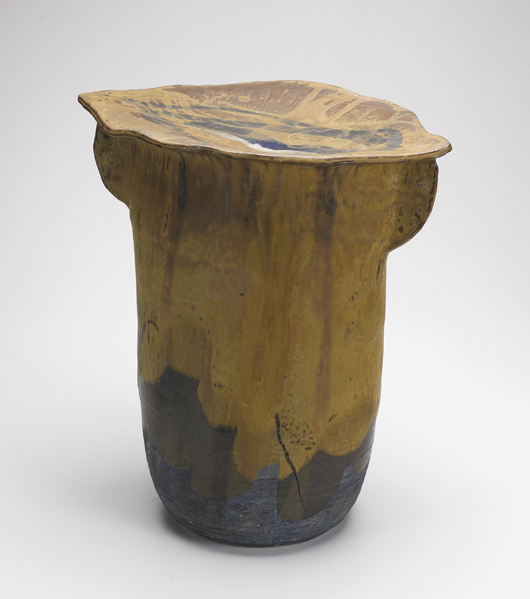 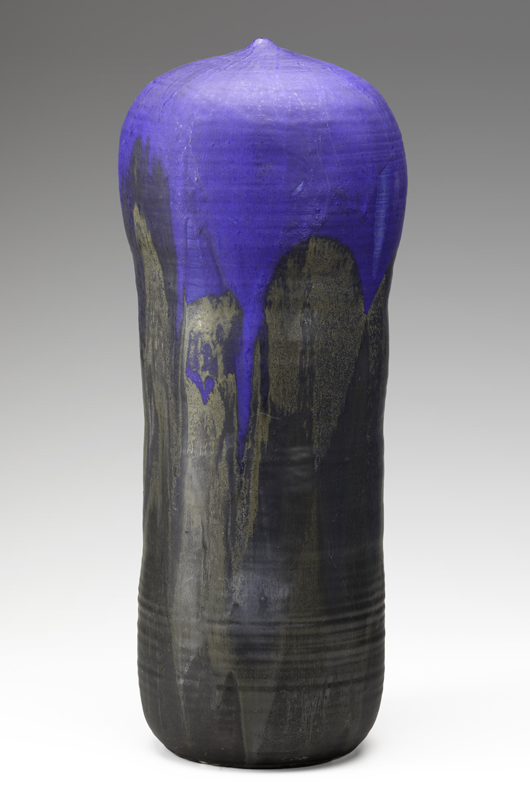 With its sought-after shape and glaze colors, this 24-inch-tall moon pot with rattle surpassed its $4,000-$6,000 estimate to bring $16,120 last year in a Rago ceramics sale. Courtesy Rago Auctions. 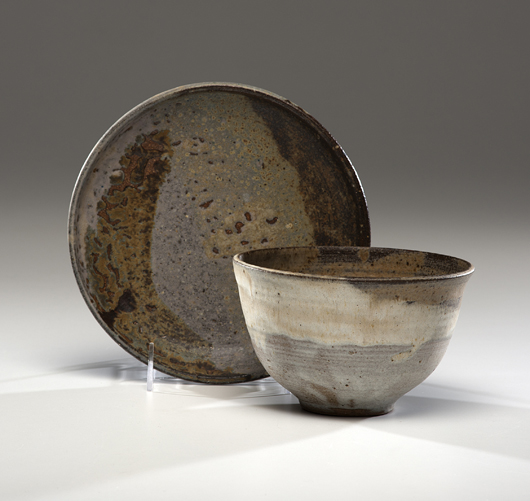 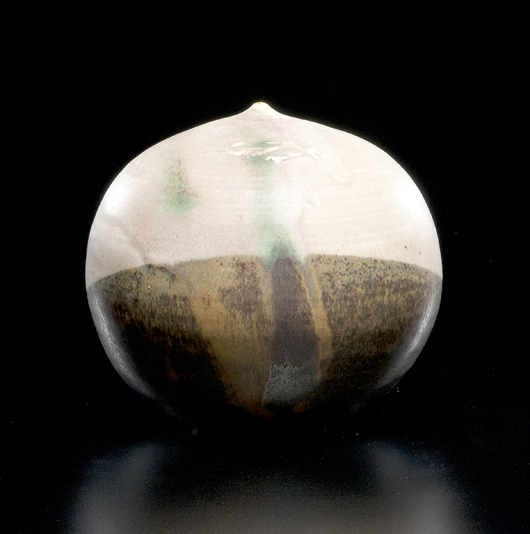