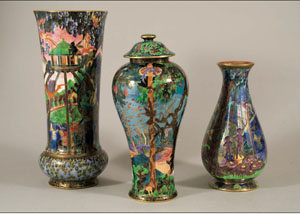 The New Orleans Museum of Art greatly expanded their holdings of Fairyland Lustre, when they received 15 superb examples from the Sydney and Walda Besthoff Collection in 2007. At left, imps climb to their tree house; at center, a view of the Ghostly Wood; and at right, two smiling goblins stand on the forest floor. Image courtesy of New Orleans Museum of Art

For those familiar only with Wedgwood’s more sedate products, viewing the firm’s Fairyland Lustre line may come as a shock to the senses. Beginning production around 1914, this highly desirable group of vases, bowls, pots and trays features inventive design schemes executed in bold colors and enhanced by a new type of iridescent lustre glaze.

Fairyland Lustre has a broad appeal. While often included in comprehensive Wedgwood collections, the fantastic designs also attract an entirely different group of collectors than traditional wares. In the current strong market, serious enthusiasts compete for the most desirable patterns and unusual color combinations.

Stuart Slavid, head of the Ceramics department at Skinner Inc. in Boston, Massachusetts, said, “In the past 23 years while I’ve been at Skinner, I’ve sold practically every major Wedgwood Collection to come on the market. Part and parcel with that, it would mean that I also would have sold a greater majority of the Fairyland Lustre to come on the market.”

“I don’t think Fairyland necessarily has ever peaked. It’s still a tremendously good investment. It’s gone up very, very consistently, unlike some other areas – even within the world of Wedgwood – which may be a little more fickle.”

Skinner’s ceramics sales regularly included examples of Fairyland Lustre, and exceptional offerings in the mid-2000s produced spectacular results. In the 2006 auction of the Zeitlin Collection, a lidded Malfrey Pot in the Ghostly Wood pattern brought $55,225 with buyer’s premium. At the same sale, a Dragon King vase sold for $45,825 and a Pillar vase for $18,880.

The Fairyland world at Wedgwood sprang from the imagination of one designer, Daisy Makeig-Jones (1881-1945), who joined the firm in 1910, quickly rose through the ranks, and continued on the staff until 1931. In a period that offered very few career options for women, female workers were prized in the field of ceramics production. Not only were they often more adept at transfer application and painting, they had a good sense of what would sell to women consumers, who were in charge of decorating the home.

Biographies describe Makeig-Jones as a true eccentric, but she had a successful vision for a line of pottery with great appeal to buyers in the boom years following World War I. Wedgwood Fairyland Lustre, a 1975 reference by Una des Fontaines, presents in detail the designer’s career, inspiration and output.

The study of Fairyland Lustre forms and decoration is fraught with peril. Patterns are complex and difficult to recognize, variations in coloration abound, and a broad range of shapes were produced, each of which required its own design transfer. The reference cited above contains a wealth of information, and persistent collectors will be able to master the dense format to identify individual pieces.

As des Fontaines makes clear, Makeig-Jones was not the best artist, but she definitely knew what she wanted to accomplish. Her biographer writes: “From her original idea for the design, and after many preliminary sketches, Daisy would prepare a carefully finished drawing. The transition from this final drawing to the lustrous, brilliantly-hued ‘delightful dreams in china’ involved a succession of skilled craftsmen including engravers, printers, transferrers, stipplers, paintresses, lustre appliers, gilders and burnishers; it also required several kiln firings.”

Above all, Daisy Makeig-Jones was a brilliant synthesizer, who drew on many design sources current in the period. The Blue Fairy Book, the first of a series of color-themed children’s volumes by Andrew Lang (1844-1912), had been published in 1889 when she was a child, and the influence of its illustrations is clear in her patterns.

The public imagination was focused on the possibility of alternative realities. Interest in supernatural beings and spiritualism had begun in the late Victorian period and grew after the Great War. Many young lives had been lost, and survivors longed to believe in a life beyond death for their loved ones.

A cause célèbre at the time, two young cousins made the news when they purportedly photographed the Cottingley Fairies in 1917. Not surprisingly, these fraudulent spirits looked not unlike Makeig-Jones drawings. On his return from the World War I trenches, J.R.R. Tolkien began his great sagas of elvish history, and some of Fairyland’s more stately beings are not unlike his descriptions of the High Elves.

Looking at the diverse wares called Fairyland Lustre, Stuart Slavid points out, “The sources are really what made it all happen in the beginning, and then just the creativity of the different color schemes and the use of gilding. Some have a very satiny glaze; some have a bright glaze, which gives variety to the pieces. Then you have day color schemes, and night color schemes, and a fire red sky as well, to make it even more complicated.”

The best Fairyland pieces are now in museum collections. The New Orleans Museum of Art, which has a rich decorative arts tradition, was fortunate enough to receive a gift of 15 superb examples from the Sydney and Walda Besthoff Collection. The beautiful pieces testify to the couple’s connoisseurship and ability to select the best on the market.

John Keefe, the RosaMary Foundation curator of Decorative Arts at NOMA, said, “Fairyland Lustre is an exotic offshoot of the standard Wedgwood tree, but at the time, they used an incredibly clever marketing technique. Wedgwood realized that their old patrician clientele was dying out after World War I. They had to appeal to a slightly flashier, new-moneyed crowd whose taste was not for blue and white jasperware. So it was a great marketing success, and obviously Daisy Makeig-Jones was pretty talented.”

He continued, “The designs fit a sort of proto-Art Deco sensibility. That’s where the genius comes in. There’s that whole interest in the world of the fairies and all that stuff, but she managed to make it look new and opulent and not like the traditional Wedgwood. At times, she was a thorn in Wedgwood’s side, but she managed to pull it off.” 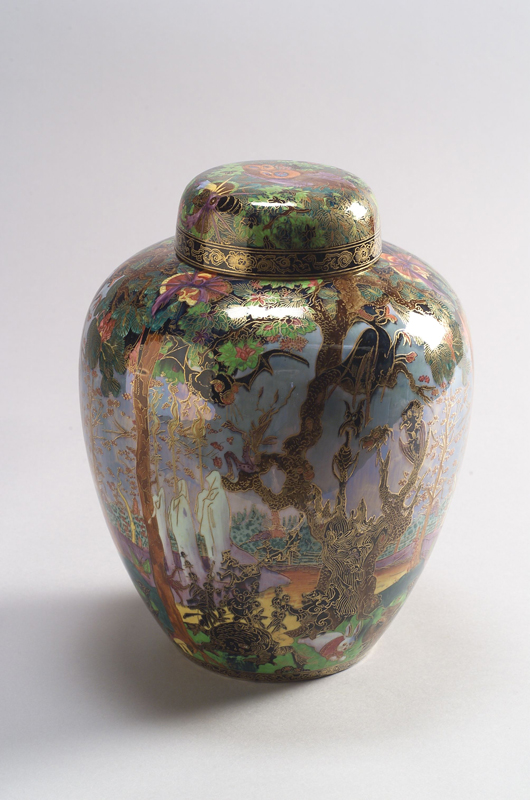 Important lots of Fairyland Lustre were part of Skinner’s sale of the Zeitlin Collection of English Ceramics in September 2006. This covered Malfrey Pot, featuring eerie Ghostly Wood decoration with a pale blue sky, sold for an impressive $55,225. Image courtesy of Skinner Inc. 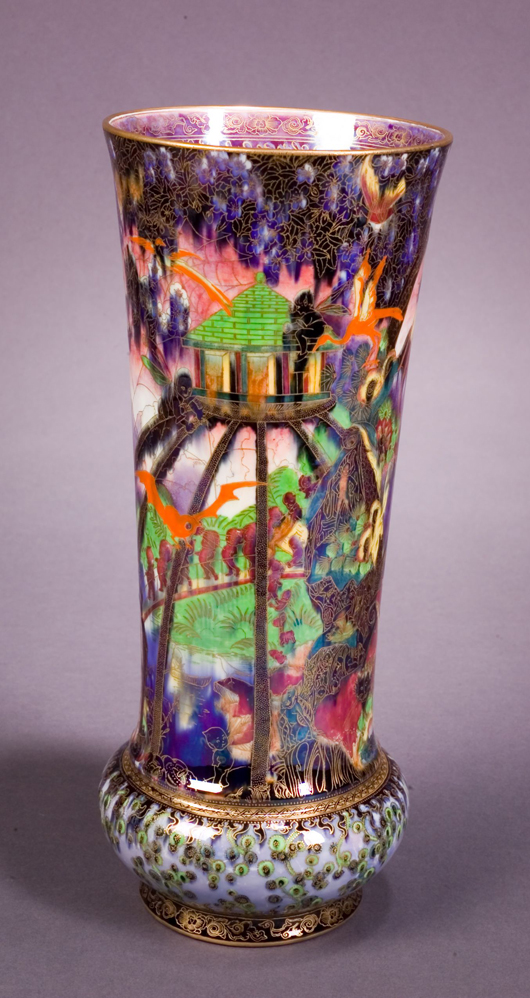 A 17-inch vase is decorated with Imps on a Bridge and Treehouse accented by a flaming wheel border at the foot. An example of Fairyland Lustre at its most creative, the piece brought $42,300 at auction in 2007. Image courtesy of Skinner Inc. 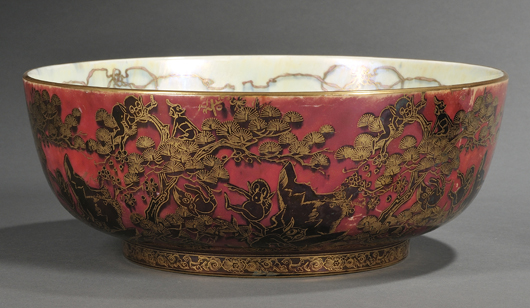 Designer Daisy Makeig-Jones wrote a complete history for the amusing Firbolgs, who caper around this red-ground Imperial bowl (10 7/8 inches diameter), circa 1920. With interior views from the story of Thumbelina, the bowl sold last July for $5,036. Image courtesy of Skinner Inc. 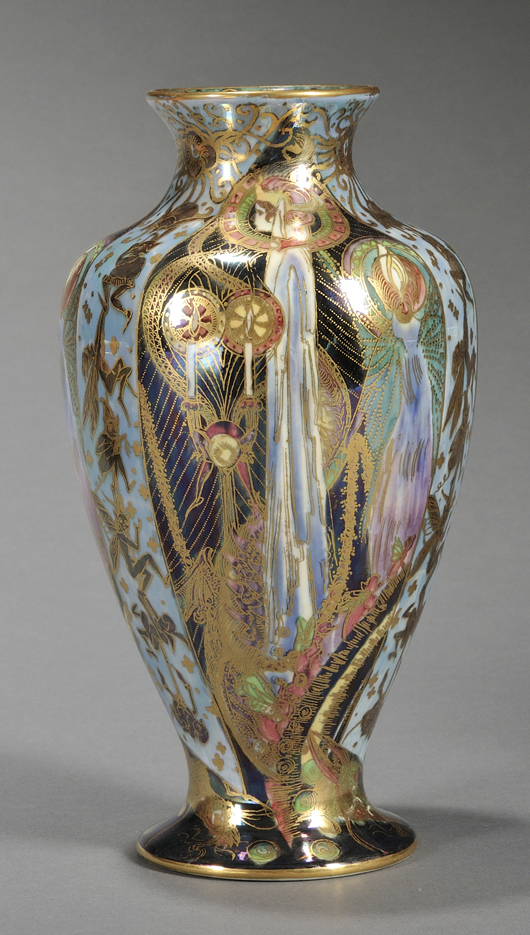 An elegant figure flanked by tall tapers forms the center of the black ground Candlemas pattern. This 8-inch vase sold at a July Skinner auction for $4148. Image courtesy of Skinner Inc. 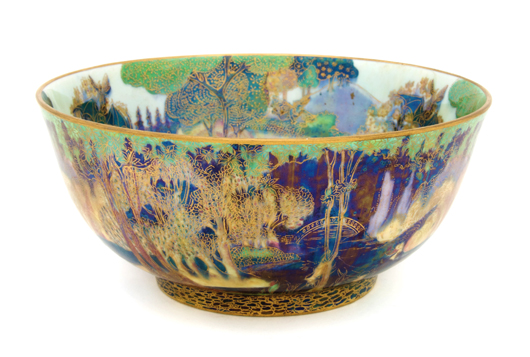 A Fairyland Lustre bowl in the Woodland Bridge pattern brought $4,148 in the October 4 Leslie Hindman Auction in Chicago. Image courtesy of Leslie Hindman.

Cabinetmaker has reverence for ‘wood with character’