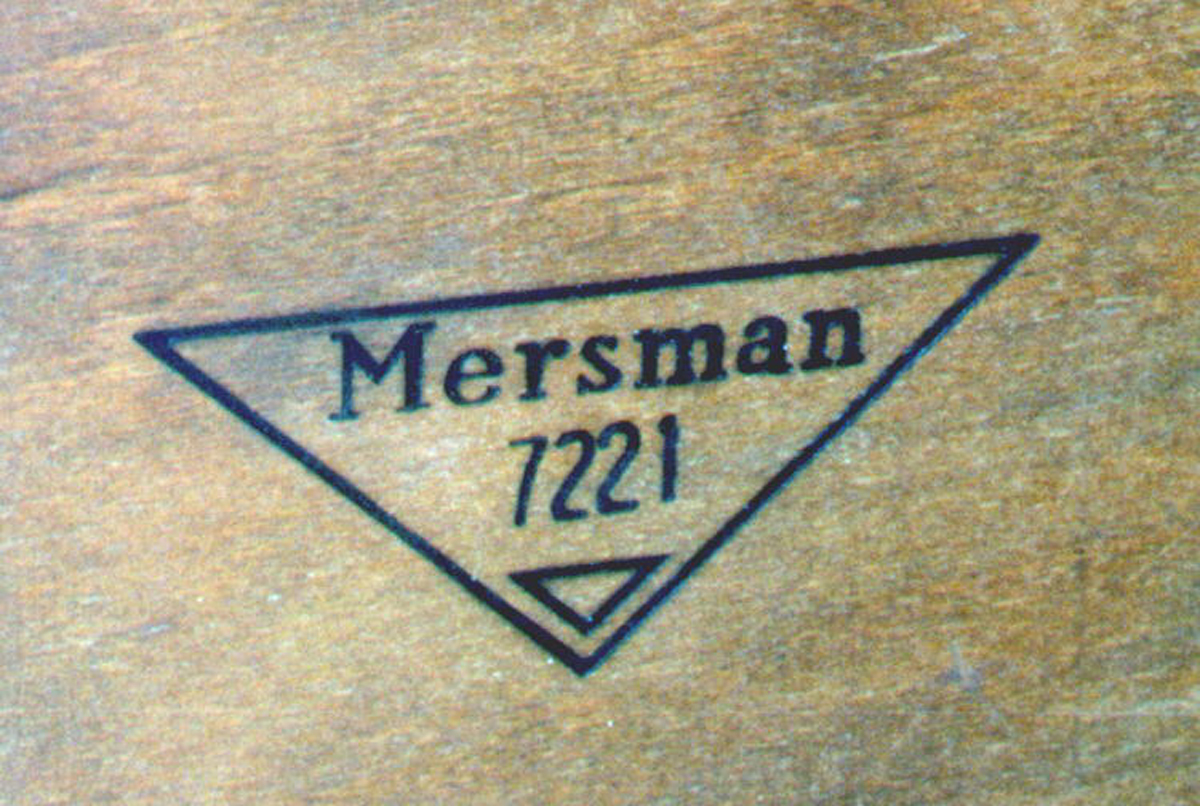 The Mersman triangle mark, or a close relative, was imprinted on 30 million American tables.

CRYSTAL RIVER, Fla. – Few of us are probably doing what we thought we would be doing 30 years ago. Things happen along the way and unforeseen turns make life interesting if not always predictable. Sometimes one of the things that can make an older or antique piece of furniture more interesting is the value added by a little bit of eccentric knowledge about where the piece came from and how it came to exist.

The furniture world is just like the real world where things happen for no apparent reason and the ultimate outcome is far from what the principals anticipated. Of course there are the straight-line bores who turn out just like they thought they would.  One of those was Duncan Phyfe. He was a Scottish cabinetmaker trained to make fine furniture. He came to America in 1784 and before long was established in New York as an upscale provider of furniture to New York’s upper crust, just as he had anticipated. Great furniture but not much of a story. Charles Honoré Lannuier was trained in Paris as an ébéniste and relocated to New York in 1803. He successfully integrated contemporary French styles into the American market. Again, some great treasures but a predictable outcome to a ho-hum fairy tale. The same with Lambert Hitchcock. He set out to make chairs and accomplished his task admirably. So did the Stickely brothers.

On the other hand there were people involved in American furniture design and manufacture who had no intention of being there or the results were not exactly as they intended.

One of those was Henry Theodore Cushman. In 1862 at the age of 24 Cushman enlisted in the Union Army and served two years in the quartermaster corps before his discharge in late 1864.  After returning to his hometown of Bennington, Vermont, he decided he wanted to manufacture something. But what? First he made corks. Then he got creative and began making up things to manufacture, along the way coming up with some things we take for granted today. One of those was the invention of the pencil with an eraser on the end. That was followed by an ink eraser, a child’s pencil box complete with ruler, and a series of other novelties including a set of roller skates made completely of wood, including the wheels. His business was listed as “manufacturer of stationers’ suppliers specialties.”

Then he turned to hat racks and developed another hit, a towel and sponge holder for the bathroom called the “Ladies’ Friend.” That was followed by umbrella stands, portrait easels, wall pockets, book racks and folding screens. Catch the drift? It wasn’t long before H.T. Cushman Co. was making 150 different types of fancy furniture. 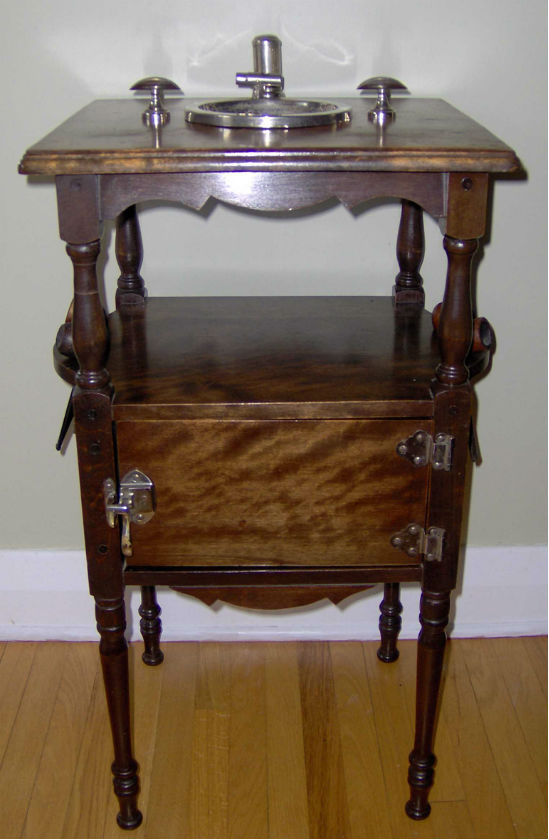 A ‘Colonial Creations’ smoker, which helped keep the Cushman company alive during the Great Depression.

At the turn of the century he turned to hardwood for his furniture creations and jumped into the Arts & Crafts/Mission craziness. Cushman died in 1910 but his sons continued the business and in the 1920s the company was one of the first American manufacturers to use spray equipment to apply finishes.

The company turned out thousand of smoking stands between 1918 and 1930 until that market died. Then it finally joined the Colonial Revival in 1933 but with a twist as might be expected. Instead of just grinding out modern interpretations of Colonial furniture, Cushman’s sons created the “Colonial Creations” line and used Dutch designer Henry Devries to accomplish the goal of bridging the gap between antiques and modern furniture. Each piece of Colonial Creations was designed to fit in the modern home and perform a modern function in a form based on an antique. The company was sold in 1964 and drifted into obscurity, but Cushman Colonial Creations are still out there doing their jobs thanks to a quartermaster clerk who had the yen to “make something.”

Another famous name in American furniture turned to furniture as a fall-back position for his real business and was successful until he decided that wasn’t what he really wanted to do after all.

J.B. Mersman was a sawmill operator in the early 1870s in rural Indiana. He sold rough sawn lumber until timber started getting scarce in his area from overlogging, so he made plain wooden slats for beds. Then he starting making complete headboards and footboards and doing quite well for himself, selling a finished bed for $1.50. That was until an iron bed maker started selling beds for $1, undercutting Mersman’s market. As luck would have it Celina, Ohio, was looking for new industry and agreed to give Mersman $7,500 if he would establish a furniture factory in town and employ at least 25 people for six months of the year for two years. Done deal. He opened the factory in 1900 manufacturing a variety of “brown goods” including beds, specialty tables and dining tables.

The Mersman ‘surfboard’ table of the 1920s was one of the most popular
tables the company made.

But all was not right in the Ohio furniture factory. Mersman found that the exacting requirements of table manufacturing had just a little too much boring detail for his taste even though he was largely successful. He took out some of his equity in the business and presented the whole operation, lock, stock, barrel and debt to his two oldest sons and a partner banker with the understanding that the youngest son, Albert, would be in charge upon his majority. J. B. then returned to his first love, running a sawmill operation in Arkansas. Shortly thereafter he contracted malaria and returned to Celina, where he died in 1904 or 1905.

But the name Mersman continued on. His sons managed a successful business under a variety of names until forming Mersman Brothers Corp. in 1927 and making mostly tables. During the 1920s the company bragged that one out of every 10 tables in American was a Mersman. The company survived the Depression making tables and radio cabinets and during World War II made desks, mess tables and benches for the war effort. At war’s end the company focused on its forte, living room tables.

Like so many other companies, Mersman Brothers was eventually acquired by a conglomerate and after a series of corporate blunders finally ceased operation in 1995. What was important about Mersman? Over the life of the company it produced, among other things, over 30 million tables for the American market. Everyone you know probably knows someone who has or has had a Mersman table. Not bad for man who didn’t want to be in the furniture business. 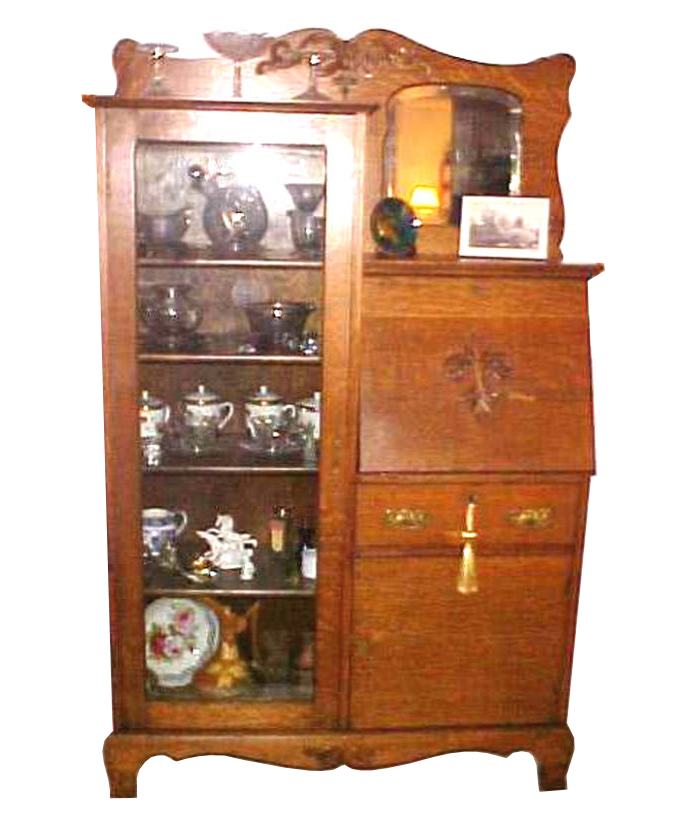 Then of course there was John D. Larkin who actually thought he was in the soap business, but eventually became more famous for his Larkin Oak than for his Larkin Soap. His case was covered extensively here previously. A free copy of that column, “Furnished by Larkin,” is available by email request.

Furniture Specific: Too many notes