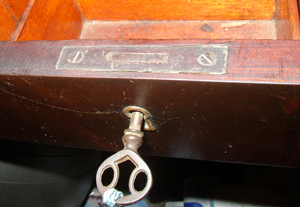 A full mortise lock is completely enclosed in the wood with only the selvage visible.

CRYSTAL RIVER, Fla. – Most of us in the real world (at least as we perceive it and ourselves) are considered to be hardworking, easy to get along with and above all, honest individuals. For the most part we are not politicians or lawyers so that description is fairly universal and fairly accurate. But there must be people out there who do not share the same set of values as you and I. Otherwise why would there be the need for those inevitably cranky, non-functional, generally aggravating locks on what are otherwise very nice pieces of older and antique furniture?

When I first became interested in older furniture my attitude was that if a lock worked and the key was there, fine. If it didn’t or it wasn’t, that was fine too. It just wasn’t that important. Until we had children. Then the ability to restrict access to certain areas and private articles became of interest to me so I took the time to study the blasted things and it turns out that they are not really all that complicated. In fact, with a few exceptions, most locking devices found on older furniture are childishly (there’s that word again) and scarily simple.

Furniture locks are classified by how they are fitted to the piece. The basic categories are full mortise, half mortise and surface mount. This describes the way the lock is mounted into the door, drawer or frame. A full mortise lock is totally concealed within a space below the surface. Only the top edge, called the selvage is visible. No part of the lock body is accessible without removing the entire lock from the wood, a trick but not impossible. A half mortise lock, the most common on 19th century American furniture, is concealed from the outside of the door or drawer but the back plate of the lock is visible from inside. The body of the lock is fitted into a mortise in the wood and mounted so that the backplate is flush with the interior surface. The backplate is screwed or nailed to the interior surface. A surface mounted lock is usually a cheap 20th century innovation that requires no cutting of the surface to mount. It screws directly onto the interior surface and protrudes into the interior of the cabinet or drawer. These are often used as “quickie” fixes by some restorers who are not familiar with the inner workings of locks.

Since most people are frustrated by a door or drawer that is apparently locked and since most of us are conditioned to accept locked spaces as “off limits”, furniture locks actually don’t have to be that secure and almost any determined interloper can gain access.

The most frequently encountered problem with old locks is neglect and abuse. Quickly inspect the lock to determine if all the pieces appear to be present – the bolt, the interior center pin, the selvage. If everything looks OK and you seem to have a key that should fit, your new best friend is WD-40. A couple of shots will have the same effect as whiskey on a barfly – it will loosen right up. Use a stout steel key to work the lock back into order. If the piece has previously been stripped but the worker doing it was too lazy or too ignorant to remove the locks first, you may have to pull the locks and clean out the old finish and stripper residue before there is any hope of making the lock work. If that doesn’t work or if you don’t have a key at all, then its time to get serious.

The operating heart of most furniture locks, excluding “grab” type locks used on chest lids, is a metal bolt that slides across the lock and fits into a mortise cut in the frame that surrounds a door or drawer. This prevents the door or drawer from moving. The bolt is activated by a bladed key. The blade fits into a semi-circular slot in the body of the bolt and as the key is rotated the bolt slides either horizontally or vertically, into and out of the locking mortise. Very clever. To make sure the bolt doesn’t just flop out of place again once it is locked (or unlocked) an internal leaf spring keeps tension on the bolt, holding it into a notch in normally two pre-determined positions, locked and unlocked. Only the action of the key, slightly lifting and sliding the bolt can overcome the spring tension.

So all you have to have is a key – that fits. First, the blade must actually fit into the opening in the lock itself. Then it must the right length to a) engage the bolt, b) compress the spring exactly enough and c) move the bolt through the entire range of motion. Then the shaft has to be the right size. Unlike most old interior house door locks which use “skeleton” keys with a solid shaft, furniture locks use barrel keys which are partly hollow on the business end. That is so the key can fit over a pin, which is installed in the center of the lock. The key uses this pin as a fulcrum to apply the required force to activate the bolt. So far so good. We’ve got a key with the right size blade and the right size hole in the barrel. But its not always that simple. Sometimes there are some primitive anti-intruder devices that must be defeated.

The most common of these is a raised semi-circular ring, concentric to the pin mounted onto the plate of the lock. This ring keeps a key from entering the lock far enough to engage the bolt – unless it has a slot cut to the right depth, located in the right place on the face of the blade. Since it is usually too difficult to look inside the lock and determine the depth and placement of the ring (or rings – some locks have more than one) the easiest way is to let the lock mark them for you. Use a new brass blank key (from Van Dykes or one of the supply houses) that otherwise seems to fit the lock. You can easily alter the brass blank by filing the blade to fit and drilling the barrel to fit the pin. Press it into the lock as far as it will go and, while applying as much pressure as you can, move the key from side to side. When you pull out the key there are the marks on the brass key made by the steel security ring that shows you exactly where to cut the notch with a hack saw! It may take two three tries to get the depth right but you can do it.

The most devilish of the security devices is a set of internal, randomly spaced, spring held levers that be must aligned into a predetermined position to allow the bolt to pass. Apparently the English of the 19th century had a much greater need for security than did the Americans to be forced to come up with this idea. It is almost impossible to create a key for an English lever lock. Fortunately, most of them are conveniently labeled as “Lever” locks so you don’t have to waste a lot of time on them. Just ignore them.

The other common problems with locks are missing center pins and broken or missing springs. Both can easily be remedied but they generally require disassembly of the lock itself. Center pins were pressed into position into the back plates. When they work loose and fall out they can be replaced by a metal screw that fits the hole. It may have to be held in place with some epoxy glue to reinforce it. Missing or broken springs are recognized by the loose action of the bolt, falling freely into or out of the body of the lock. Spring replacement requires the removal of the bolt. At the rear of the bolt is a tiny slot where the leaf spring was installed. If it is broken off in the slot remove the stub with a tiny chisel or screwdriver. Then hammer the appropriate length of a modern bobby pin into the slot. The bobby pin is a natural spring and will allow the lock to work again.

That wasn’t so hard. Practice with locks is the key — that and collecting as many types and sizes of keys as you can from the local flea market, lock shop and antiques show. Soon you will be breaking into old cabinets at will. Just don’t let the kids see how you do it.

Send your comments, questions and pictures to me at PO Box 215, Crystal River, FL 34423 or email them to me at info@furnituredetective.com.

Visit Fred’s newly redesigned website at www.furnituredetective.com and check out the new downloadable “Common Sense Antiques” columns in .pdf format. His book “HOW TO BE A FURNITURE DETECTIVE” is now available for $18.95 plus $3.00 shipping. Send check or money order for $21.95 to Fred Taylor, PO Box 215, Crystal River, FL 34423. 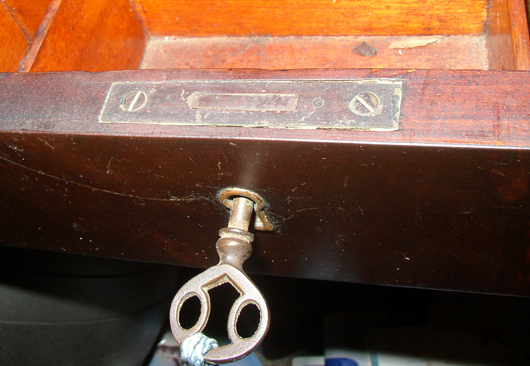 A full mortise lock is completely enclosed in the wood with only the selvage visible. 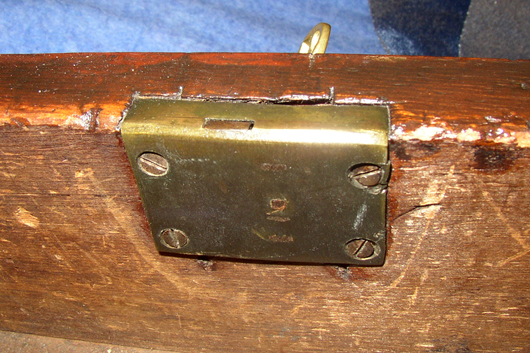 A half mortise lock is implanted part way in the wood but leaves the back plate visible from the inside. 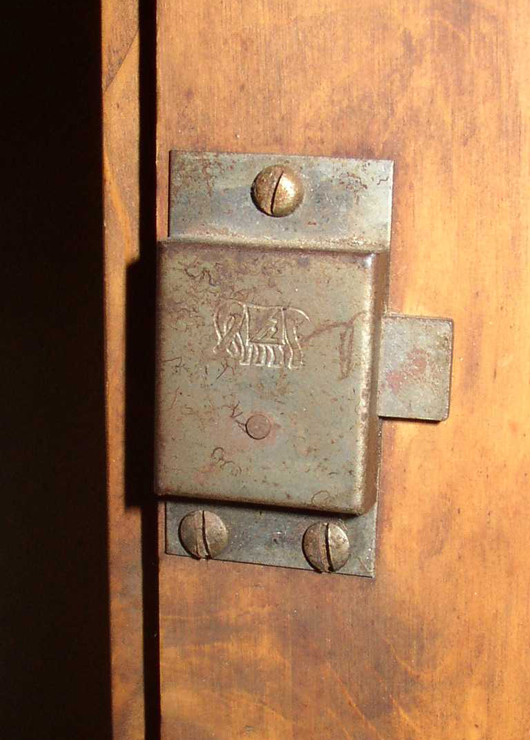 A surface mount lock is simply nailed or screwed to the interior surface. 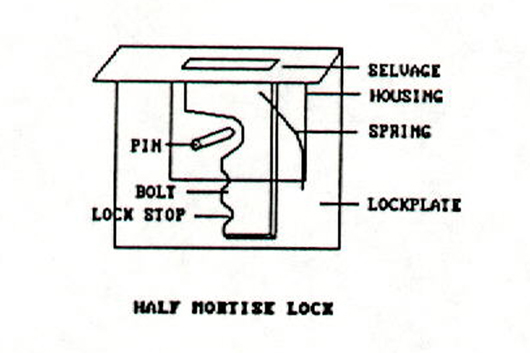 This diagram show the parts of a half mortise lock. 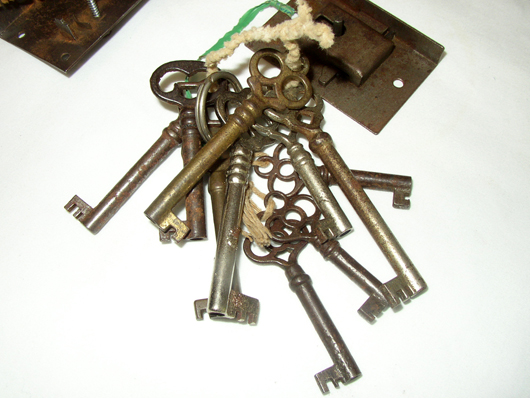 These keys are all “notch” keys with cuts in the face of the blade. 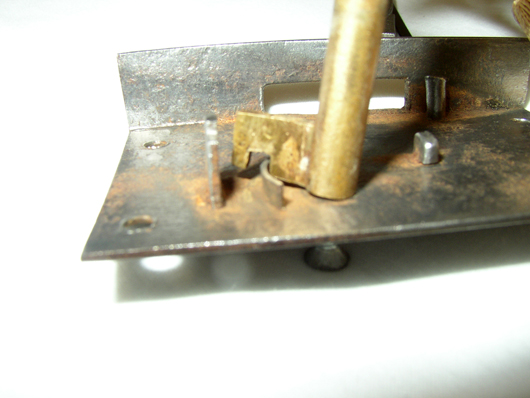 This illustration shows how a notch key works over the internal security ring of a lock plate.