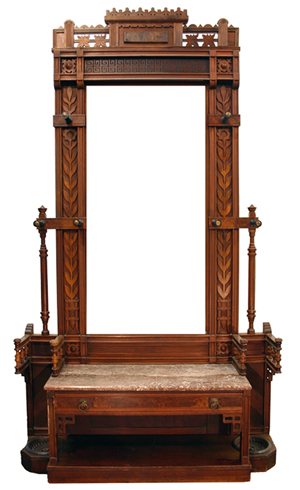 Showing the square outline and profuse linear decoration of the surface, this Eastlake hall stand is from the 1880s.

CRYSTAL RIVER, Fla. – In several previous entries I have mentioned the curious dichotomy of the late Victorian world of the 19th century that divided the world into masculine and feminine in almost all areas of life. The outside world was a man’s world while the interior of the house was the domain of women.

The demilitarized zone, the DMZ, was the transitional space provided by the front hall found in most 18th century Georgian-style homes and 19th century Victorian-style houses. The front hall was the buffer that protected the privacy of the occupants even when a stranger was in the house or at least in the hall. The front hall was also the transitional space between masculine and feminine areas of influence and was furnished in an appropriately distant and sterile manner.

In addition to being the transition area it was also the waiting area. One had to be invited into the interior of the house by a resident of appropriate rank. While it was important to be polite to anyone, regardless of rank, there was a definite seating priority. Persons of equal or greater social ranking than the owner of the house were invited in immediately either into the parlor or into the study or library, whichever was befitting of the purpose of the visit. Those of lower rank, especially delivery people and messengers, were not invited in and waited in the hall. While it was incumbent on the owner to provide seating, it was not required that the seat be comfortable. The person wouldn’t be there that long. Thus hall seating took on an especially austere look with flat straight wooden chairs or stools with no padding but just a plank seat.

Of course, finding seating that was not necessarily comfortable was no real problem. The Europeans had been doing it for centuries and the English colonies that became America had no trouble following suit. It was just a matter of finding the right chair or bench.

But the hall had another function that was not so easily filled. In its job as transitional space it had to be able to provide for the change of attire required by moving from inside the house to outside or vice versa. It had to handle coats, hats, gloves and scarves in some sort of elegant fashion that could still remain neutral in sexual orientation but be acceptable to all parties. It also had to be identifiable as a temporary place of residence for outer garments, not just an adjunct to the main closet. Thus the arrival of the hall stand, also called a hall tree and in later adaptations a hall seat when a flat seating surface was provided.

The hall stand was a form of its time. There was no historical precedent for such a piece of furniture in Western history. Not only was it a new form, it was developed to accommodate and take advantage of new inventions and new social priorities in the mid 19th century.

One of the new inventions, not necessarily new but newly available to the mass market, was the simple mirror. In the 18th century hand-spun crown glass was carefully polished to provide small, mostly handheld mirrors that were relatively expensive. By 1825 the crown method of making glass had given way to the cylinder method (fully explained in this space in another column) that produced cheaper, bigger and flatter glass for use in mirrors. Citizens of the mid-Victorian period and later were extremely concerned with personal appearance and mirrors were located around the house in strategic places. The transition space of the hall was the perfect place to check on appearance before entering the formal interior of the house or before exiting into the public world of the outside and the hall tree was the perfect place for a mirror.

Another invention that was not new but had newly acquired status and respectability was the umbrella. The actual form of the umbrella is ancient and was usually carried by servants to shield a person of high status from sun or rain. In the 18th century an offshoot of the umbrella, the parasol, to protect delicate skin from the sun’s rays, became the symbol of a woman of leisure, but a man who carried an umbrella was considered quite mundane and ordinary. People of class had carriages and had no use for an umbrella. That changed in the mid-19th century and the umbrella became a mark of distinction for the rising middle class. Thus the hall stand had to make room and accommodations, in the form of a rack for the handle and drip pans for the fabric, for the humble umbrella.

The high fashion of the mid to late century called for the wearing of “stovepipe” hats by men and storing the tall cylinders could present a problem. Not for the hall stand. It merely adopted a set of sometimes elaborate hooks from which to hang stovepipe hats and even more importantly, to temporarily store expensive, often fur-lined or trimmed outerwear.

Those three requisite elements of the Victorian hall stand were often accompanied by one more section required by the social customs of the day. A horizontal space of some sort had to be provided to accept the physical artifacts of the custom known as “card leaving.” Calling cards were the accepted way to enter a new society or announce a change of status or address. It was such a tightly regulated custom that cards were carefully examined by recipients for flaws of color or taste that might impart some hint of social status or the lack thereof by the card sender. A flat surface mounted by a silver tray was the correct way to receive a card and the hall stand was the correct place for the ceremony.

The heyday of hall stands was the Renaissance Revival period of the 1870s and 1880s when stands often reached monumental proportions. After that the size, complexity and importance of the hall stand retreated until the maximum minimalism of the Arts & Crafts period pretty much did away with the form leaving a simple hat rack in the hall to open the 20th century.

For more about Victorian customs and furniture see The Tasteful Interlude by William Seal, a pictorial tour of American interiors 1860-1917, Praeger Publishers, Death in the Dining Room and Other Victorian Customs by Kenneth Ames, Temple University Press and Late 19th Century Furniture by Berkey & Gay by Brian Witherell, Schiffer Publishing. 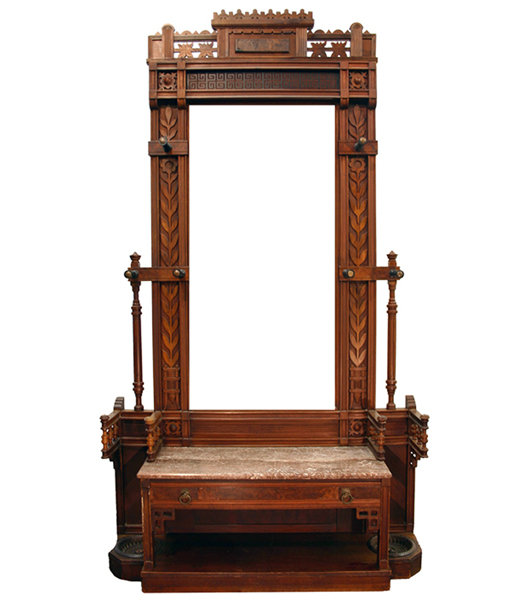 Showing the square outline and profuse linear decoration of the surface, this Eastlake hall stand is from the 1880s. 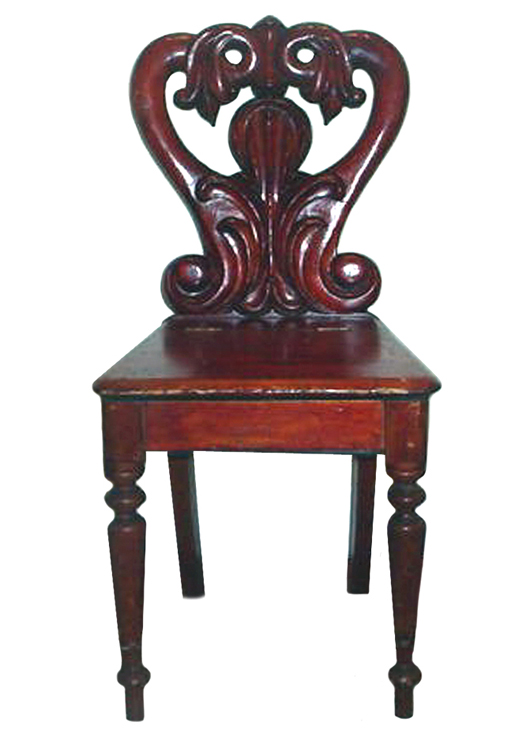 This plank-bottom chair with a lift seat for storage is typical of the ‘guest’ seating found in Victorian period halls. 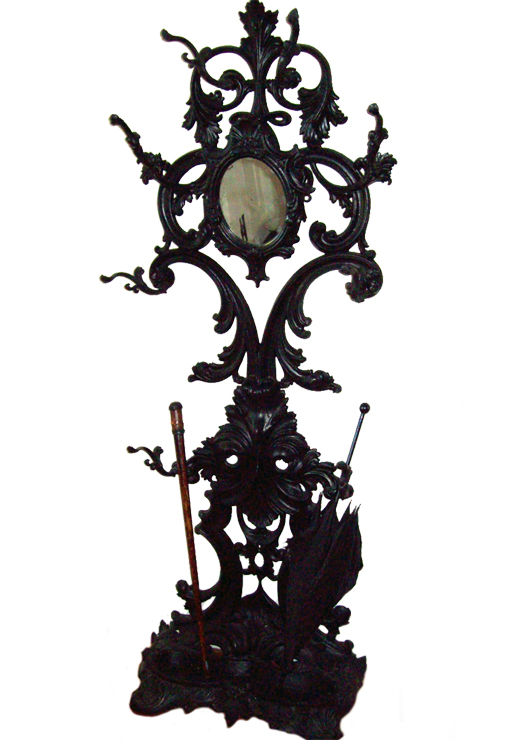 One of the few pieces of Victorian cast-iron furniture to make it inside from the garden is this Rococo hall stand from the 1870s in the Gregory House at Torreya State Park in Florida.

This scary looking piece is a hall stand made around mid-19th century in the Gothic Revival style of the period. 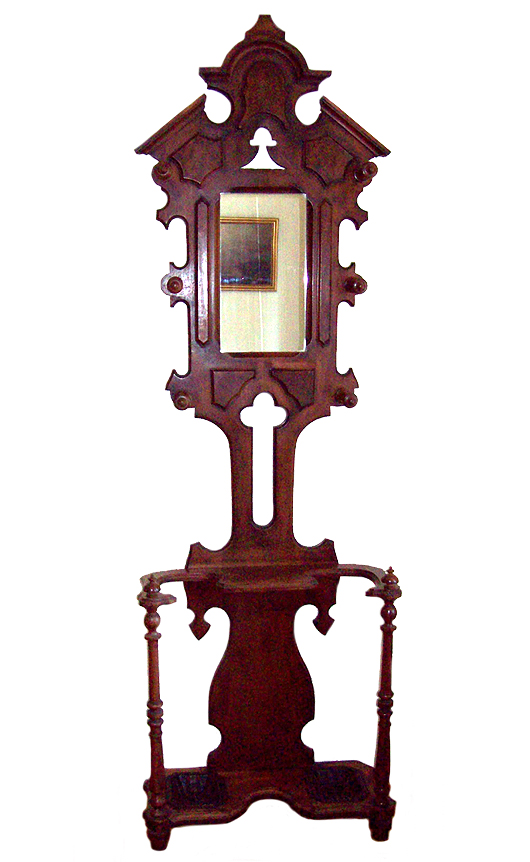 This is a tame example of the hall stand of the Renaissance Revival period of the 1870s. 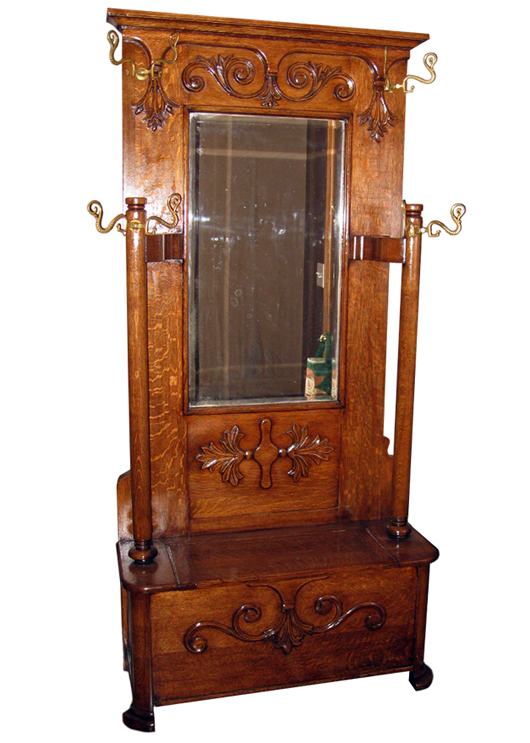 By the turn of the century the hall stand was losing importance, but this example of the Golden Oak era is still impressive in scale and function. This one demonstrates the alternative seating provided by the flat lift top storage space in the center. 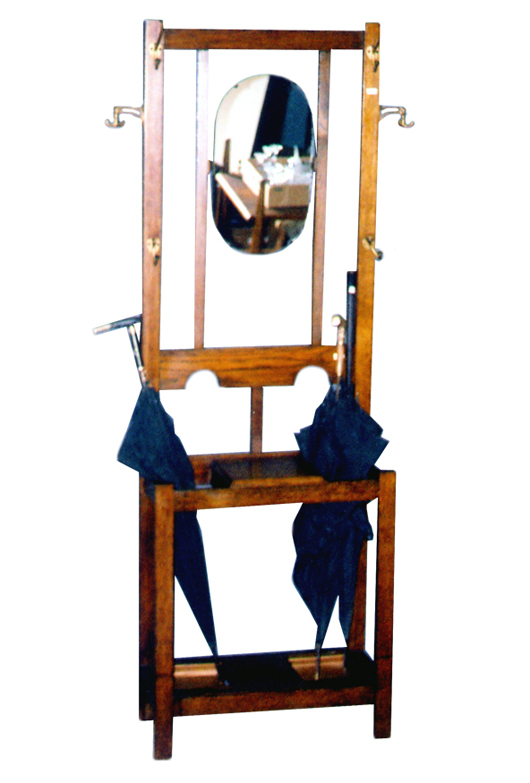 By the Arts and Crafts period the form was but a mere shadow of its former self.