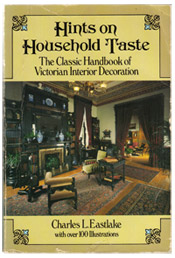 Eastlake. Yuck! Those two words are often found together in many discussions of 19th-century American furniture. Other terms that may be lurking close by in those same conversations include ugly, clunky, gaudy and cheap. And in most cases the terms are aptly used since what is commonly called Eastlake furniture often fits nicely with those disparaging words. But the problem is with the application of the terms since most of what we refer to as Eastlake has absolutely nothing to do with the original ideals and concepts of one our favorite Englishmen whom we love to hate – right up there with George III. But Eastlake, unlike George, is undeserving of our enmity. In the long run he actually provided a valuable service to the American furniture industry and its consumers.

Charles Locke Eastlake was born in England in 1836 with the proverbial silver spoon firmly in place. Trained as an architect, he traveled Europe as a young man and became an art and architecture critic. At the age of 19 he was appointed secretary of the Royal Institute of British Architects. From this lofty vantage point he began to notice the ground swell of activity in the field of design reform. What had begun as a vague discontent with the stagnation of original English thinking on the subject crystallized into openly expressed distaste at the 1851 Crystal Palace Exposition.

Early English reformers such as architect Augustus Welby Northmore Pugin and artist John Ruskin were very much put off by the rococo “French antique” movement of the mid-19th century, characterizing it as vulgar, cheap and poorly constructed. This handful of tasteful radicals advocated a return to indigenous English medieval Gothic forms that involved individual craftsmanship and visible honesty in design and construction. The concept so moved a young decorator, William Morris, that he founded a firm that made wholly handcrafted furniture and accessories for its wealthy clientele.

Still much above the fray, young Eastlake was busy working on his new book about European architecture, A History of Gothic Revival, which was eventually published in 1872. But in his spare time he had turned his attention to interior decorating, inspired by Morris. In the 1860s he wrote a series of articles for several prominent London magazines including The Queen. He assembled these articles and published them in 1868 as a book titled Hints on Household Taste, which was his take on how to properly decorate a home. In it he expressed opinions not only on furniture but also on most types of articles found in a house including wallpaper, draperies, ceramics, clothing and jewelry. This was not a modest man. 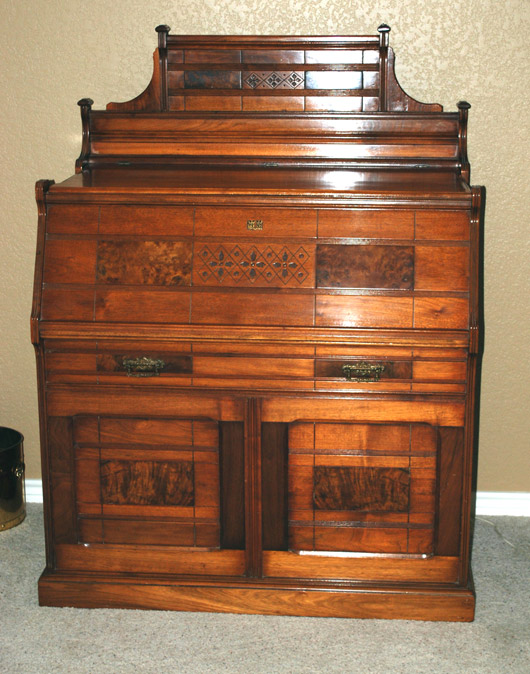 Inside this elegant and simple Eastlake cabinet is a late-19th-century folding bed. This design is simple Eastlake as interpreted by the late century furniture industry.

But his ideas were fairly modest. He believed that the design of a piece of furniture – and everything else for that matter – should appropriately reflect the use for which the article was intended. Superfluous decoration was just that, superfluous and entirely unnecessary. Even those articles that were designed to be decorative should also have a useful function. A well-shaped piece of wood incorporated into a well-done design was ornamentation enough and little else was required, especially a French polish. To Eastlake’s way of thinking, when wood became shiny it began to lose interest.

While Eastlake’s personal benchmark of integrity was medieval design he did not stridently espouse it in his writing. He only expressed the importance of the spirit of manufacture of that age, not necessarily the exact form of the period. The overall guiding principle was simplicity, in direct conflict with rococo, which he said “ensured the greatest amount of ugliness with the least amount of comfort.” Surprisingly he was not averse to the use of wood veneer, equating it to the use of a marble skin over bricks in architecture and silver plate over a base metal in jewelry and tableware. 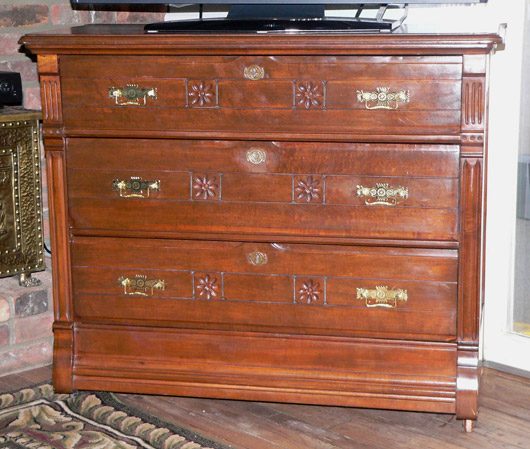 This design is probably closest to what Eastlake had in mind.

As influential as he was in England, he was even more of a hit in America. Hints on Household Taste was first published in Boston in 1872 and was subsequently reprinted five more times before 1890. The influence was monumental and contemporary writers did their best to sound like him and espouse his principles, even to the point of outright plagiarism.

By the time the Centennial Exposition rolled around to Philadelphia in 1876 the precepts of Eastlake were well known. Even though the exposition, touted to celebrate America’s 100th birthday, prominently featured overwhelming displays of aging and tired Renaissance Revival designs, some works inspired by Eastlake were evident. Bear in mind that Eastlake was not a furniture designer. He was an arbiter of taste and concept, not the mortise-and-tenon type. Very few of the pieces of furniture he sketched for Hints on Household Taste ever became reality, and he personally never planed a board so far as we know.

But other talented artisans did so using his vision as the guiding light. Kimbel and Cabus, the renowned New York cabinetmakers, displayed an ebonized parlor set, made of cherry that adhered closely to Eastlake’s own drawings of “modern Gothic.” And Mitchell and Rammelsberg of Cincinnati had dining room and foyer items that closely followed suit. Even the Japanese were a boost to the reform movement. Their Oriental exhibit was wildly popular and the country was swept up in Oriental themes and designs for the last quarter of the century. One of the most successful of the designs was the transition, based on Eastlake design principles, from Far Eastern bamboo to faux bamboo, especially in bedroom sets.

This Eastlake platform rocker base looks like it was designed as a group project in a mechanical drawing class.

The Centennial Exposition was pivotal in the history of American furniture design, not because it focused on the Colonial Revival, which was the original concept, but because for the first time it brought furniture manufacturers from all over the country together in one place. This was important because major centers of furniture production had moved from the East Coast to the Midwest, and there was isolation among factories and design centers. Now the second-tier furniture makers were able to see firsthand what was hot in the East, and what caught their attention were the simple lines and obvious construction techniques of the Eastlake school. Here was a concept that fit like a glove with the manufacturing technology of the period.

While the important cabinetmakers like the Herter Brothers and Kimbel and Cabus continued to make extremely high quality “modern Gothic” furniture, the assembly line producers of the Midwest turned out train loads of cheaply made, poorly designed Eastlake furniture. These factories made use of the latest technology, which included the multiple-head pantograph carver that could duplicate a shallow decorative theme on a dozen drawer fronts at a time. While some of the furniture was acceptable, much was of poor quality and this is the type that seems to have been made in very large quantities, much of which still survives to elicit the opening comments. 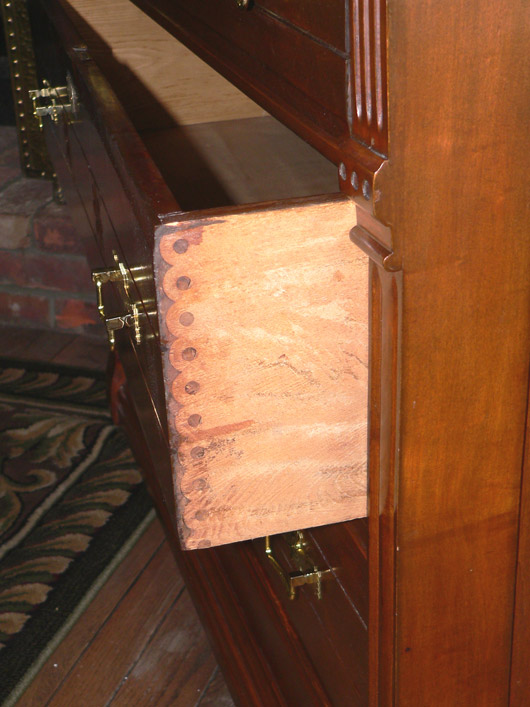 This drawer joinery represents the intersection of Eastlake’s medieval style with the new machine age. The joinery is the Knapp joint, the first machine-made production model drawer joint, put into use in 1871.

Eastlake was a realist and, like his acceptance of veneer, he was not totally averse to the application of machinery to the production of furniture so long as the end result was better furniture for more people. But the application of his principles by the lower end furniture manufacturers of the day, especially in America and especially to such poorly designed and built inventory eventually led to his public disclaimer of the “Eastlake style.” By the 1878 London reprinting of Hints on Household Taste, he had had enough. He felt compelled to author a new preface to the book distancing himself from “What American tradesmen are pleased to call ‘Eastlake’ furniture, with the production of which I have had nothing whatever to do, and for the taste of which I should be sorry to be considered responsible.”

So other than not taking credit for some junky furniture that bore his name, what exactly did Charles Locke Eastlake, the English non-architect do for American furniture design? He provided the design vehicle that broke the stranglehold of Renaissance Revival. He provided the bridge that linked the mid-19th-century early reformers like John Ruskin and William Morris to the turn-of-the-century luminaries like Elbert Hubbard and Gustav Stickley. In other words he laid the groundwork for the American Arts and Crafts movement. That’s what.

If you are interested in this period of history you may find Hints on Household Taste to be a surprisingly easy, informative and entertaining read. At less than 300 pages of large print it doesn’t take long. Many used bookstores have a copy for less than $5. My version is the 1996 Dover Publications reprint of the 1878 edition, which carries Eastlake’s revised preface.