This turn of the 20th century spool cabinet has finger joints. Photo by Fred Taylor.

CRYSTAL RIVER, Fla. – The dovetail drawer joint, from the earliest crudely cut, single-pin joint of the 17th century to the highly refined, machine-made dovetails of the 20th century, has been the joint of choice for most American cabinetmakers. But the dovetail joint is not the only way to make a drawer work.

Drawer construction began with non-dovetailed joints, using the nailed rabbet joint, a17th-century technique which has survived through the centuries and is still in use today in low-load, inexpensive furniture because of its ease of construction and the resulting low cost. This single-cut joint is an ideal application of machinery to furniture making and, today, makes use of high-tech modern glues and low cost fasteners, turned out by the billions in brad and staple factories.

In addition to the long-lived rabbet, there have been two other significant non-dovetail joinery techniques used in drawer construction, both machine made. One survives today and the other has been gone for nearly a hundred years, a victim of changing culture rather than technology, but still remains an important clue in furniture identification.

By the middle of the 19th century, the race had long been under way to convert virtually all furniture production to the machine-oriented factory system. Modern circular saws were in general use by the 1830s, and the 1840s and ’50s saw power planers and spindle carvers. The development of the modern screw of the 1850s greatly improved factory production, and transportation systems were beginning to catch up with production methods. What was lacking was a good machine-made drawer joint. Through the Civil War era, in spite of all the modernization that had taken place, drawers were still assembled using handmade dovetail joints.

The Civil War, like almost all periods of conflict, produced significant technological advances, and one of those was the idea for a type of machine joint called the “finger” joint. This new type joint, which went into production soon after the war, consisted of interlocking “fingers” cut alternately from the drawer side and the drawer face, each of which then engaged its opposite number, interlocking with each other, producing a joint held together by surface tension and the force of hide glue. This was a neat, quick joint, easily produced by the machinery of the period because it required only a uniform series of straight cuts.

But this joint, in spite of all its great qualities, like low cost and ease of assembly, had a major drawback. It wasn’t very strong. The interlocking that resulted from the straight-cut fingers of the joint was really only a friction joint, relying almost entirely on the strength of the glue to carry the force exerted on the drawer during operation. It did not use the strength of the wood itself like the dovetail joint did, which pitted the slanting sides of the pins and tails against each other, taking advantage of the potency of wood fiber.

Thus the finger joint was relegated to small-scale, low-weight applications. One of the most common applications is seen in the countertop merchant’s desks commonly called “spool cabinets.” This was the perfect application, a nice clean joint on a thin drawer side which would never be heavily loaded or abused. The finger joint is still in use today in small projects like jewelry boxes and humidors, where compactness and neatness count.

The other major non-dovetail machine drawer joint innovation of the 19th century was the so called “scallop and peg” or “scallop and dowel joint.” The real name for this unusual construction is the “Knapp” joint, named after the inventor, Charles B. Knapp of Waterloo, Wisconsin.

Mr. Knapp had worked on the idea of machine-made drawer joints for several years when he had a brilliant stroke. Instead of trying to make the machinery duplicate the work of human hands, the dovetail, why not produce a joint taking advantage of what machinery does best? And what machinery does best is go around in circles. All machines basically revolve around the generation of power in a circular motion which is then transmitted somehow to do other work. Mr. Knapp went straight to the circle and developed the idea for a machine that cut round holes and inserted round pegs into them, an early example of what we now call “thinking out of the box.” He received a patent for his device in April, 1867.

The Knapp machine was a complicated affair involving five cutting parts. It had an auger, a hollow auger, two v-shaped cutters and a circular cutter. The auger bored the holes in the drawer side, the hollow auger gouged out the pegs from the drawer front and the rest of the cutters shaped the circles around the holes and the pegs. This joint not only was quickly and easily made by the machinery, it also had the interlocking feature lacking from the finger joint. It truly was a good drawer joint.

Mr. Knapp improved his design and tested the machine at the Matthews Brothers furniture factory in Milwaukee in 1870 with satisfactory results. He then sold the rights to the machine to an investment group in Massachusetts, which formed the Knapp Dovetailing Machine Company. The company immediately hired Knapp as a consultant and then hired a Northampton machinist named Nathan C. Clement to improve the machine and get it into regular production. It began work in the Beal and Hooper factory in East Cambridge, Mass., in 1871.

As the price of the machine itself became more affordable, its use spread throughout the East and made modest gains in the Midwest, where it was used by Nelson, Matter in Grand Rapids and Mitchell and Rammelsberg in Cincinnati. At its peak, the machine could produce 250 drawers in a day compared to the average of 20 a day produced by hand work. It was, in all aspects, a very successful innovation.

So why don’t we see it in modern production today? The answer to that is cultural, not technological. Many people of the late Victorian era held to the notion that morality and strength of character were influenced by the things around them. Thus they made an effort to surround themselves with possessions such as houses, carriages and furniture that had attributes like high quality, strength and suitability to a purpose. They also felt that the most moral, strong and courageous people in history were the Founding Fathers of America and that by acquiring things from their Colonial past, they could absorb some of the atmosphere of the period which inspired George Washington and Thomas Jefferson.

Alas, there were a great many more Victorians wanting to acquire Colonial artifacts, including furniture, than there were Colonial artifacts. This impasse was broken in the 1870s with the acceptance of the idea that items which merely looked like the 18th century real thing were also acceptable as sources of spiritual and moral inspiration. Thus began the great Colonial Revival of the last two and a half decades of the 19th century.

The Knapp joint was a victim of this romance with the past. The Knapp was a thoroughly modern looking piece of work, high tech for the times. There was nothing from the Colonial era that resembled it, and it certainly did not look like the handmade dovetail joints of the period furniture. As the Colonial Revival picked up steam going into the 20th century, the high tech of the 19th century fell by the wayside, giving way to the machine-made dovetail joint which, even though it was machine made, looked more like the 18th century joint than did the Knapp. The last Knapp joints were cut around 1905 and have not been used in new production since then. 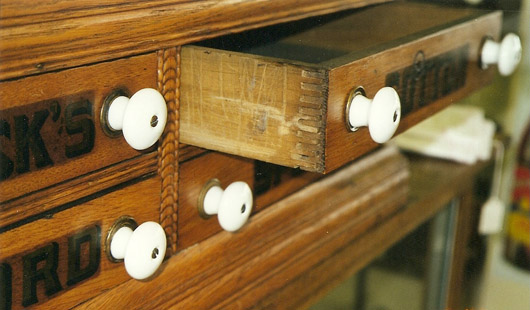 This turn of the 20th century spool cabinet has finger joints. Photo by Fred Taylor. 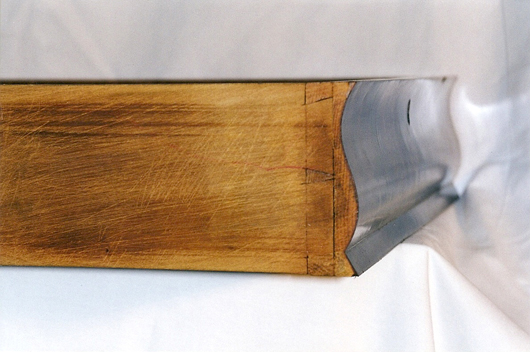 This is a handmade dovetail joint, circa 1830. Photo by Fred Taylor. 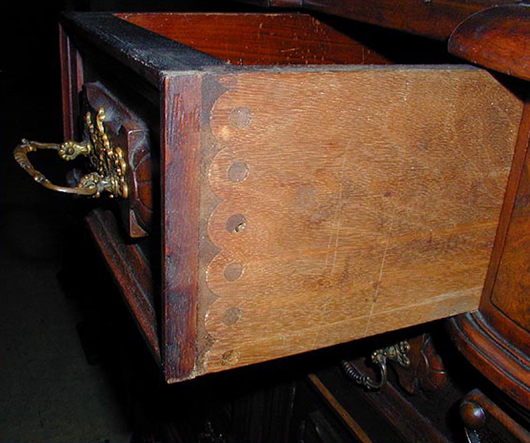 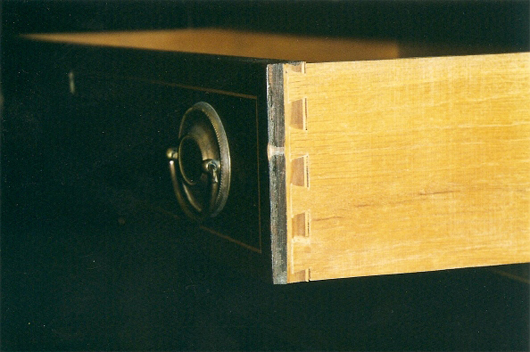