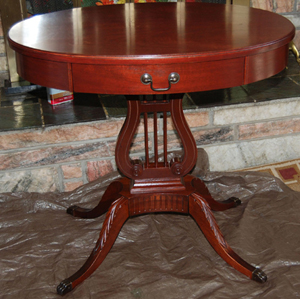 This great little table was made by a famous maker – it and 300,000 of its identical twins. Their collector’s value is slight. Fred Taylor photo.

“Life is full of its little disappointments,” my mother frequently said to me. She was right in many ways. And one of the ways that disappointment has shadowed part of my life is that I have to disclose to strangers that their family treasure just isn’t so.

Of course, I do not go out looking for people on whom to heap disappointment, at least not usually. They seek me out – not for that of course but usually to confirm their preconceived belief about a piece of treasured furniture. Most are not prepared for the disappointment that often comes with a few facts. In the book “The Importance of Disappointment,” Routledge, 1994, sociologist and psychologist Ian Craib (1945-2002) noted that, “There is much in our modern world that increases disappointment and at the same time encourages us to hide from it.”

Some of the readers who inquire about their furniture and receive a disappointing result react nonchalantly saying, “I didn’t really think it was anything anyway. I just had to ask.” Others react a little more strongly with, “That’s not what Aunt Mildred told me and I have never known her to lie” or “I just don’t believe you know what you’re talking about.” That’s OK too. Go find someone who will tell you what you want to hear. Just don’t be disappointed – again – on auction day.

A recent case in point was an inquiry from a person who thought they had a chair of some serious note. It was labeled by a famous 19th-century New England maker with a legible patent date and a recognizable form. Prior to asking my opinion about the chair, the inquirer, assuming my knowledge of the subject to be limited, gave me a lengthy history of the manufacturer, with some notable errors and omissions including the fact that the company, in the late century, used no machinery at all and all the furniture was 100 percent handmade. That, of course, demonstrated a notable lack of information about late 19th-century furniture-making on the part of the inquirer with the few exceptions of makers of so-called “Centennial” furniture, which this maker was not. I was then informed that furniture from this cabinetmaker family was among the most sought after and highly priced work in the current market for antiques both in this country and abroad.

So now that I had been properly informed (prepped?), what was my opinion of the worth of the chair? Well, it was obvious from the photo of the chair that it was a factory-made, production chair. It did have some nice hand-carving in the animal figures but the rest of the chair was strictly by the Henry Ford assembly line method. But I wasn’t about to give an opinion on value without doing some homework on comparable items. I found it. Virtually the same chair with the same label, patent date and original upholstery had sold online the previous year for less than $500 – pretty fair comparable.

I shared this with the inquirer who told me that was not consistent with her research and she would not accept that. Suited me. I asked her if she wanted a refund on my free opinion. She did not handle the disappointment well. Perhaps after she pays an appraiser $500 to evaluate her $500 chair she will have a different attitude. Or maybe not.

Frequently I am asked about the value and collectibility of the products of a famous table maker. The trade name is so familiar that almost any “antique” shop has a couple of them around and almost everybody’s grandmother has one left over from the 1930s. The problem is that the famous table maker was almost too famous for its own good. Over the life of the company it made over 300,000 tables that found their way into American living rooms. And yes, the tables are well-marked with the maker’s name and a model number and the tables are always “in great shape.” And they look so expensive with the solid mahogany tops and the hand-carved solid mahogany lyre bases and carved legs. When I point out that the solid mahogany tops are veneer over lumber core plywood and the lyres and legs are machine carved on a secondary wood called red gum and that 300,000 models of the same table were produced, most contain the disappointment saying, “I like the table anyway. It looks good in my living room.” That’s the way it should be.

Then there was the lady who sent me pictures of her dining room set made by a company in Grand Rapids on which she could find no information. She wanted to know about the company and the set. Her grandmother had acquired the set in 1951. She had the receipt but didn’t know if the furniture was new or used when it was acquired. I gave her a brief history of the company and told her where to find more. Then I told her that the carved chairs were 1950 reproductions of Rococo Revival chairs. I pointed out that the table had no carvings at all and the carvings on the sideboard did not match the chairs. And the carving on the crest of the china cabinet was different yet. My conclusion was that the “set” was not a set. It was pieces and parts that had been acquired at the same time from the same source as an “assembled” set. She was hardly disappointed, thankfully.

She responded to my answer with, “Thank you so much for taking the time and effort to answer my questions. It seems that I was right about some things like the set not being a true ‘set.’ Are those acorns? I couldn’t tell and the middle carving looks like pineapple, well kind of does. I have always liked the Rococo style but did not know that was the name for it. I figured the carving was not purely original as the price would have been higher, even for 1951. Thank you so much for the info, I will indeed enjoy my family heirloom.”

Now that’s what I want to hear!

Send your comments, questions and pictures to Fred Taylor at P.O. Box 215, Crystal River, FL 34423 or info@furnituredetetcive.com and visit his Web site at www.furnituredetective.com. 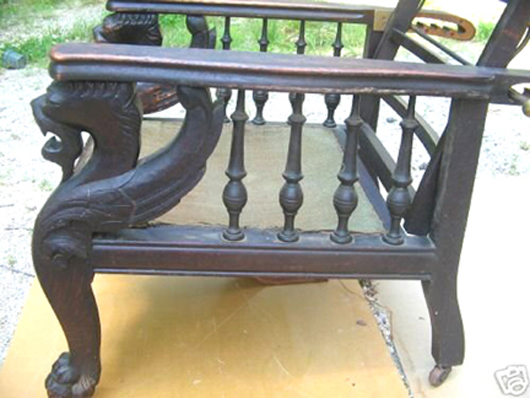 This chair is virtually identical to the chair the owner asked about – same style, same maker, same patent date, same condition. It sold for just under $500. The owner was not happy with that. Fred Taylor photo. 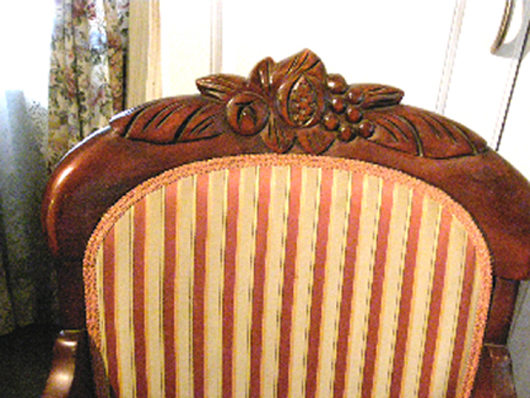 The carving on this 1950s reproduction Rococo Revival chair is mostly spindle-carved and touched up by hand. It would be a stretch to call it hand-carved. Fred Taylor photo.