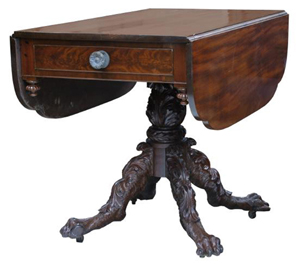 This Empire drop-leaf table, circa 8130, has as solid mahogany top and base with crotch cut mahogany veneer on the drawer front and skirt.

CRYSTAL RIVER, Fla. – All that glitters is not that expensive stuff and all that is red in antique furniture is not mahogany. In fact not even the mahogany is red most of the time and half of what you think is mahogany is not.

The wood most often called mahogany in modern times, since the mid 18th century or so, is commonly known as Honduran mahogany, Swietnia macrophylla, the large leaf version, named after the Dutch physician who described the genus in 1760. Although harvested primarily for convenience along coastal Honduras, this variety also grows in Jamaica, Florida and South America. But this is not the “true” mahogany that started the ball rolling for New World woods. The real stuff is Swietnia mahogani, the so-called Cuban mahogany, which has a higher specific gravity and darker color than its large leafed cousin.

This is the wood originally identified in the 16th century as a type of cedar tree, used by Cortez to build ships and by Raleigh to repair them. It was widely used in royal residences in Europe in the 16th and 17th centuries but was far too exotic and expensive for ordinary cabinetmaking. It was not until the beginning of the 18th century that the Honduran variety, known in England as Jamaican mahogany to avoid the heavy import duty, became readily available in commercial quantities.

The common name for the tree was bestowed upon it by workers from Nigeria, enslaved on the early plantations of Jamaica. They identified a tree that appeared to be identical to one from their homeland, Khaya sengalenisi, and gave it the same tribal name they used in Africa: M’Oganwo. It doesn’t take much imagination to figure out how that became “mahogany,” although at different times and in different places it was known as mohogony, mohogani, mehogeny, etc., etc. You get the drift. Except in France of course, where it was called “Acajou.”

No matter what it was called, it became a standard for English furniture after 1715. It was particularly favored for tabletops because of the immense size of the available planks. It was not unknown for a single plank to be 6 feet wide and 20 feet long – or more in some cases – something that no European source could match.

And mahogany had several other things going for it. Even though it had been around for 200 years, the new availability opened opportunities for cabinetmakers who had not been given the chance to work with it. Not only was it something new and novel, it was easy to work with, a trait not found in the indigenous walnut and oak of the English Isle. Its close grain, smooth texture and softer surface were much more amenable to intricate carving and not nearly so hard on the tools of the period as the native resources. It also polished up nicely to a warm glow and the almost infinite variety of grain patterns was a delight to designers. But the crowning impetus for the beginning of the “Age of Mahogany” was the loss of the nearest competitor. The standing stock of European walnut was virtually eradicated by the Walnut Blight of the winter of 1709. Since it takes 10 to 20 years to slow dry a walnut log, after the existing stocks of cured wood were exhausted there was no more furniture grade walnut available in commercial quantities until late in the century. (The same thing, to a lesser degree, occurred in the United States during World War II. The hardwood stands of America were denuded since nearly every G.I., whether stateside or overseas, carried an M1 Garand or M1 carbine with a walnut stock. The forests did not recover commercially until the early 1960s.

Mahogany really came into its own in the mid 18th century with the designs of Thomas Chippendale and the Georgian explosion that lasted for decades. The first real slowdown in the mahogany rage came as the result of Napoleon’s blockade in 1806 to close the Continent to British trade. Since English ships carried the most mahogany from the Caribbean, it did hurt the overall industry but English cabinetmakers still had plenty of good stock, while French artisans had to make do with coloring domestic woods “in the fashion of mahogany.”

This initial imitation of mahogany eventually launched a major commercial change in direction for the furniture industry. The search for a cheaper, more readily available substitute for the expensive rain forest import took on new importance in the Victorian era. In America newly built furniture factories were in full operation by mid century and it took an enormous quantity of wood to keep them operating seven days a week. All manner of techniques were employed to disguise various woods, mostly maple and birch, as mahogany. Cherry was used liberally in Empire and Restauration furniture because of the base color. Other domestic woods were stained, painted, glazed or grained in an effort to create a faux Swietnia.

But the ultimate answer came quite accidentally and was not immediately recognized for what it was. In 1856 an English chemist by the name of William H. Perkin, had an accident while trying to produce quinine from coal tar. What he ended up with was the first aniline dye, mauve. Aniline itself is a colorless, highly toxic liquid produced from chlorobenzene and is used in the manufacture of explosives. The new dye, based on this potentially lethal base, became the foundation for the process that produced the vividly colored fabrics of the late 19th century.

By the time the furniture industry caught on to this new coloring agent it was almost 1900. The effect was dramatic. Structural members made of mahogany became almost unheard of in the retail furniture trade. Mahogany was relegated to strictly a decorative role in the form of veneer for the most part. And the manufacturers and dealers of the early 20th century made no secret of the substitutes. Sears, Roebuck & Co., in its 1902 wish book, took great pains to explain and promote its use of other than mahogany. In the description of a five piece parlor set, its “$17.90 SWELL SUITE”, the text points out “The frames are substantially made of the best selected birch with a fine mahogany finish. … It gives the same general effect as genuine mahogany and is very much less expensive … and you have the same strength as you would have in genuine mahogany furniture.” Elsewhere the catalog describes the finish as “simulated mahogany” or “imitation mahogany.” Thus the cat was out of the bag in a big way.

And it was not just Sears. It was the entire industry for the most part. The great Colonial Revival movement of the 20th century owes it very existence to the use of dyes used to simulate mahogany and walnut in furniture that would not have been produced during the Depression years had the real thing been employed. That revelation and the development of a curing process that allowed the commercial use of red gum as a secondary wood in the 1920s were the cornerstones of 20th century American furniture until the introduction of particleboard in the late 1950s, which ended the history of furniture as far as I am concerned.

Is it still possible to find furniture made of mahogany? Of course. Go to any real antique store, auction or show and most of what you see will be mahogany of some type or another. But be prepared to be just skeptical enough to not believe that every dark red piece of wood is mahogany.

Send your comments, questions and pictures to me at PO Box 215, Crystal River, FL 34423 or email them to me at info@furnituredetective.com

Visit Fred’s newly redesigned website at www.furnituredetective.com and check out the new downloadable “Common Sense Antiques” columns in .pdf format. His book How To Be a Furniture Detective is available for $18.95 plus $3 shipping. Send check or money order for $21.95 to Fred Taylor, P.O. Box 215, Crystal River, FL, 34423. 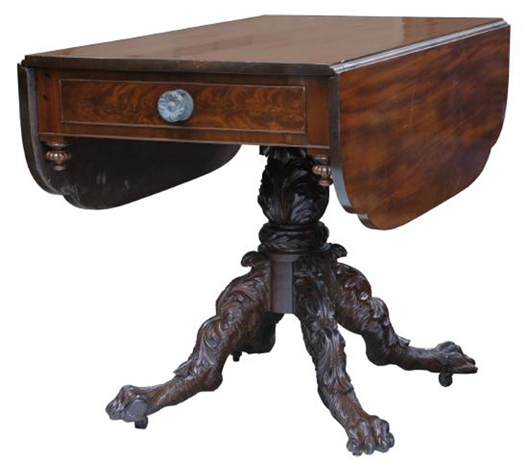 This Empire drop-leaf table, circa 8130, has as solid mahogany top and base with crotch cut mahogany veneer on the drawer front and skirt. 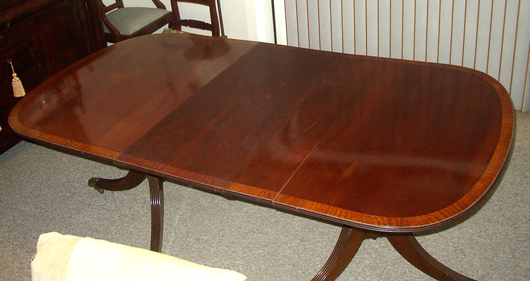 This late 18th century table is made of very wide single boards of solid mahogany with satinwood edge banding. 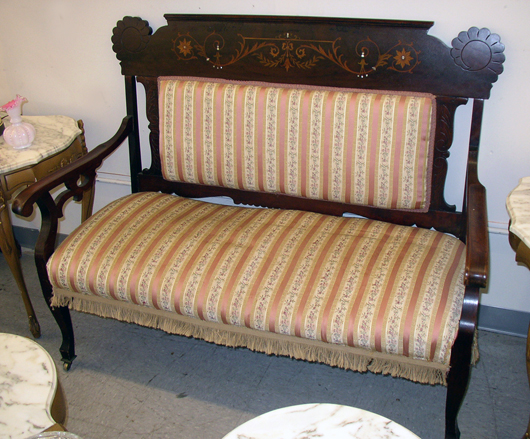 This settee from a parlor set, circa 1900, is made entirely of birch with a mahogany finish as described in the Sears catalog. A similar five-piece upholstered set was shown in the 1902 catalog for $12.45. 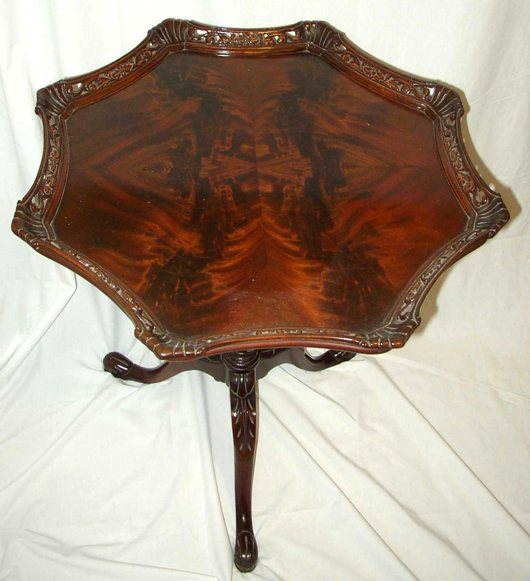 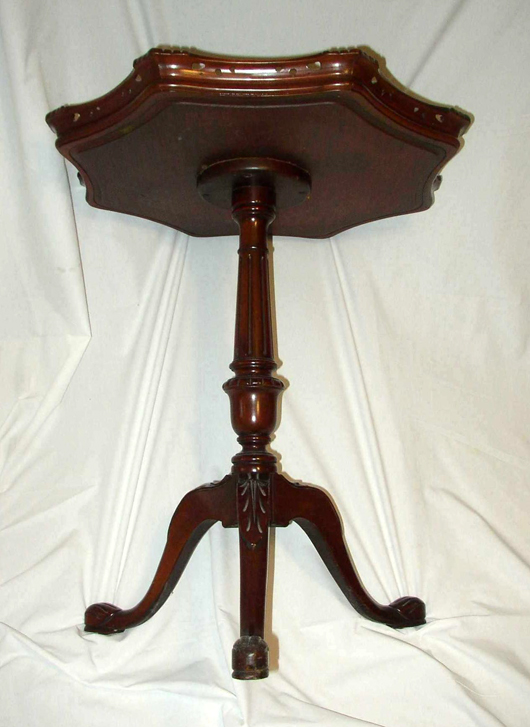 The turned and carved pedestal, legs and feet of the lamp table, like the edge of the top, are made of gum, colored to look like mahogany.

Furniture Specific: Add oil only if it squeaks