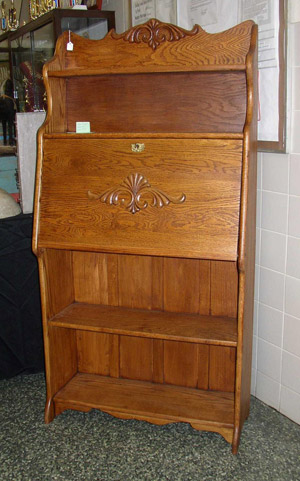 The late 19th century in America was a time of impending change, economically, socially and politically. The Western frontier was essentially a thing of the past, the Midwest was safe and the far West was livable. The South was still languishing from Reconstruction but its time would come.

Between 1870 and 1916 more than 25 million immigrants poured into the country and the population swelled from 40 million to over 100 million in that nearly half century. All these new consumers wanted new products, needed new jobs and demanded delivery systems for it all. The amount of railroad track in the nation increased from 9,000 miles in 1850 to over 200,000 miles in 1900, spurring growth along the right of way.

The country’s furniture industry, growing as fast as it knew how, was unable to keep up with the demand for new household goods with its antiquated design, production, marketing and delivery systems based primarily on the experiences and practices of the early Industrial Revolution. Something had to give and change was coming.

Two major forces would soon coincide to bring a vast quantity of relatively high-grade furnishings to middle-class Americans, something that previously had been totally out of their reach. The two movements, one philosophical and one economic, would combine to produce the Progressive Era from 1890 to the beginning of World War I.

The philosophical force was the thinking behind the Arts and Crafts movement, advocating a return to basic medieval simplicity of design, honesty of construction and fair pricing in the production of furniture, among other things. This quaint idea was immediately popular, but, as it turned out, the execution of such lofty ideals was much more expensive than Morris, Eastlake, Ruskin and even Gustav Stickley had counted on, therefore the popularity was at first confined to the more well-to-do customers, not the intended beneficiaries of the philosophy.

As the movement progressed in the furniture industry it became apparent that the style, not necessarily the quality or the philosophy, was the key to spreading the influence of the Mission design. While Gustav Stickley continued to turn out smaller quantities of well-made and thoughtfully designed furniture, much of the rest of the industry, including several of Gustav’s brothers, quickly adapted the linear geometric requirements of the Mission style to the assembly line efficiency of large scale factory production. While most of this furniture came nowhere near the quality of that produced by Craftsman or Limbert or Toby, it did look a lot like it to the uninitiated and it certainly was more affordable. And it was generally better quality than the earlier industry standard of tacky late Victorian and the “rushed to market” Colonial Revival pieces showing up at about the same time as Mission. While the full impact of the movement was diluted by this mass production, in one sense it accomplished one of its original objectives by providing a large part of the population with higher quality, better-made furniture. 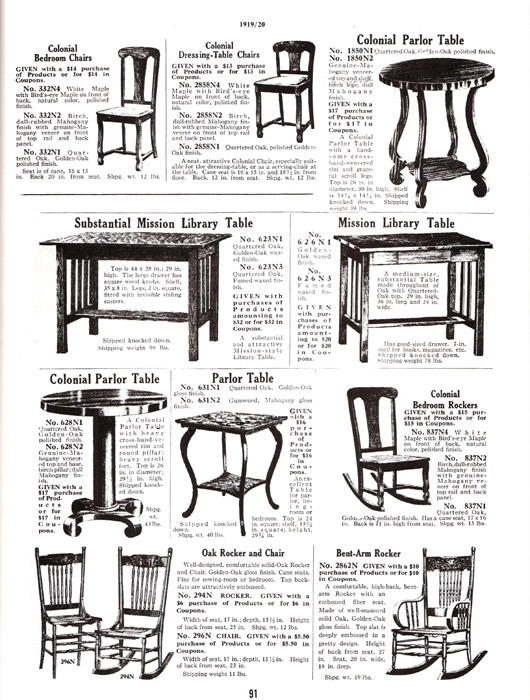 This is page 91 in Walter Ayers ‘Larkin Oak.’ It shows part of the 1919 Larkin catalog that features on one-page versions of Mission, Golden Oak and ‘Colonial’ styles. Image courtesy Fred Taylor.

An even greater force was starting to be felt at the beginning of the Arts and Crafts period. That was a rethinking of how products should be sold and distributed to the public and the new magic word of the period was “catalog.”

Aaron Montgomery Ward was the pioneer on the cutting edge of the new thinking. In 1872 he issued his first catalog, a one-page flier listing goods for sale, prices and ordering information for items acquired in bulk from manufacturers. Thirty years later he was mailing 3 million catalogs annually. When Ward died in 1913 his annual sales were in excess of $40 million. Taking a clue from Ward, a rail station agent with time on his hands and a penchant for watches started retailing shipments of timepieces to other agents. Richard Sears turned his distribution network into the R.W. Sears Watch Co. in 1886. The following year he moved the operation to Chicago, took in a partner named Alvah Roebuck and in 1893 changed the company name to Sears, Roebuck & Co. By 1895 the company was producing a 500-page general merchandise catalog, including furniture. The 1897 edition of the “Consumer Guide,” as the Sears catalog was called, was the most read publication in America that year.

While the Ward and Sears catalogs were general merchandise publications, mailboxes at the end of the century were often flooded with many other catalogs, most much more narrowly focused. One of these was from the maker of a line of household and personal soap products originally known as “J.D. Larkin, Manufacturer of Plain and Fancy Soaps.” John Larkin started in 1875 in Buffalo making one product, Sweet Home Soap, which he sold to street vendors. Three years later his line had expanded to nine types of soap products. His first salesman, his wife’s brother, Elbert “Bert” G. Hubbard, was a traveling salesman known as a “soap slinger,” going from door to door peddling his wares. Hubbard became a partner in the firm in 1878, changing the name to J.D. Larkin & Co. Fourteen years later the company issued stock and was known as Larkin Soap Manufacturing Co.

In addition to soap slinging, Larkin began to market his product wholesale to retailers, often customizing the packages to include the names of individual stores. This was a practice known as “stenciling,” which became popular in the piano industry after the turn of the century. But Larkin and Hubbard had another idea to try. In 1881 they decided to compete with their rivals by offering giveaway items, or premiums, with purchases. These premiums started out as small picture cards that housewives accumulated and traded. The cards became more elaborate and premiums soon included items like handkerchiefs and bath towels. The response was immediate and overwhelming.

By 1885 Larkin and Hubbard knew the key to mass merchandising was to eliminate the sales force and sell directly to the consumer via direct-mail catalog. His pitch was that since he manufactured the products he sold, unlike Sears and Ward, and sold them directly to the consumer, he was eliminating the “middleman” and giving the customer better value for the money. And he was giving them a free premium. A $10 order of soap resulted in the awarding of a premium with a retail value of the same $10. By 1891 he placed his first wholesale order of items to be given as premiums, $40,000 worth of piano lamps. The next year he acquired 80,000 Morris chairs and 100,000 oak dining chairs – all to be given away with the purchase of soap.

The plan worked. Both his product line and his premium line expanded. By 1893 Larkin Soap Manufacturing Co. was sending semiannual catalogs to 1.5 million customers. The plan worked so well that Bert Hubbard was now rich and retired to East Aurora, N.Y., where he founded the exclusive Roycrofter community of Arts and Crafts artisans. 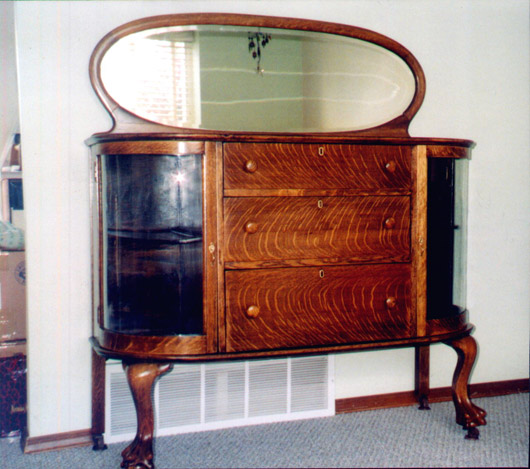 This is the Larkin Buffet no. 220, first offered in 1909 as the premium for a $20 purchase of Larkin Soap products. Image courtesy Fred Taylor.

Larkin soldiered on. He realized he would be better served if he made not only the products he sold, but also the premiums he distributed. His first venture was the furniture assembly plant in Buffalo that made furniture from parts cut and milled in Tennessee. Here for the first time was a major catalog distributor who actually made the furniture they shipped. In 1901 he established the Buffalo Pottery factory to meet more premium needs. The company was so big and influential that it received its own building for display at the Pan American Exposition.

Furniture was one of the primary premiums and Larkin had a keen sense of marketing in that category as well as in soap products. Since he was appealing to the great middle class he wanted to be careful to offer furniture items that appealed to them, not the downtown set. As a result, his furniture catalog was like a snapshot of the market through the years. His most famous premium was the Chautauqua desk, offered in the 1901 catalog, the venerable oak drop front desk with the open bottom storage that was given as premium for a $10 purchase of soap. In solid oak with a golden finish, applied carving and a beveled French mirror, this small desk exactly reflected the taste and style of the golden oak period of American furniture in a modest enough form to fit in any middle-class home.

In 1908 the catalog continued the golden oak format but in addition offered a wide selection of currently popular Mission-style oak furniture. Then in 1909 for the first time, a “Colonial” piece was in the catalog. It was a library table with C-scroll legs and feet reminiscent of the Late Classicism period of Empire of the 1840s. It was offered in solid golden oak of course, but in a radical departure, it was also offered in low sheen mahogany. This was the first acknowledgement by Larkin of the increasingly popular Colonial Revival revolution.

Well into the mid 1920s the furniture catalog offered all three styles prominent in the first quarter of the century. The 1925 catalog had more than 900 items, most of them manufactured in Larkin factories in Buffalo. John Larkin died in 1926 and the company eventually foundered in the Great Depression, being liquidated in 1941.

John Larkin and Elbert Hubbard not only provided the means for a growing American population to stay clean at a reasonable cost, but they also helped furnish millions of American homes – as a gift.

More detailed information about John Larkin and Larkin Soap Manufacturing Co. as well as more than 100 sample Larkin furniture catalog pages can be found in Larkin Oak by Marcy and Walter Ayers. This book and the companion guide to Buffalo Pottery, ?Larkin China, can be purchased directly from the authors for $25 ppd., payable to Oaktree, Box 279FT, Summerdale, PA 17093.