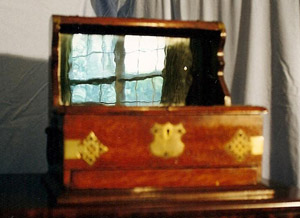 The ‘dimpled’ distortion pattern seen in the reflection in the inexpensive mirror glass of this circa 1890 jewelry box is typical of 19th-century cylinder glass, both in mirrors and in clear panels.

One of the most alluring features found in some pieces of old furniture is the glass installed in the piece. A secretary with glass in the doors is arguably more attractive than one with blind panels. And what would a vitrine or china cabinet be without the glass? A box. But is glass just another pretty face or can it be used to tell us something about the time of origin of the piece in which it is installed? You bet it can if you know the history and technology of glassmaking. It turns out that glass isn’t “just glass.”

But none of these forms actually have anything to do with furniture glass. The glass used in furniture, windows and for mirrors is called flat glass or broad glass. The Romans never saw a technology they didn’t like, and glassmaking was one of them. In addition to becoming outstanding artisans in the field of decorative glass they also were the first who learned how to produce flat glass for windows. By pouring molten glass on a flat table they were able to make sheets of glass. It wasn’t clear by any means and had horrible distortion in it but it did let the light shine in.

Then shortly after the first century glass making technology, like wood veneering skills, seems to have taken a nosedive for over 1,000 years, not resurfacing until the 13th century in the Murano region of Italy. Artisans there produced a perfectly clear, very hard glass called cristallo and the process was a closely guarded secret for over 200 years. Of course, it eventually got out and the chemistry for making clear glass was then widely known. It was the mechanical process in creating broad glass that was problematic.

By1668 craftspeople in France were using a technique of creating plate glass called the “broad glass” method. It consisted of blowing a bubble in a gather of molten glass and slinging it into a cylinder shape. It was then slit and rolled out on a flat surface while still hot. This produced glass with almost as much distortion as the old Roman method but it did have better clarity. To be useful, though, it had to be extensively ground and polished.

A more reliable method that produced relatively clear glass with much less distortion was the “crown method” widely in use by the end of the 17th century in Europe, the time of William and Mary in England. Crowning, like the previous method, began by blowing a sphere in a gather of molten glass but this time it was disconnected from the blow pipe and attached to a puntil, an iron rod, on the opposite side of the sphere. The puntil or punty was then twirled to make the glass open out into a concave disk called the “crown” or the “table.” The average table was about 36 inches in diameter. The table was placed on a flat surface and the punty removed. After cooling, annealing, the reheating process, and cooling again the table was cut into sections for use as window panes.

The crown method, while a great improvement over earlier processes, still had its problems. Since this is the method used to create most of the glass used in furniture built in the American Colonies in the 18th century, the problems associated with the method give us some excellent clues to its use. The crown or table of glass was not a uniform thickness since it was formed by centrifugal force. The edges were very thin and the thickness increased toward the center. The spot where the punty was attached was the thickest portion of the table and was called the “bullion” or the “bull.” This was regarded as an inferior piece of material at the time and was used only in the lowest of places. Today “bulls” are highly collectible artifacts of the period and the craft.

Another characteristic of crown glass is the internal pattern. Since the glass was formed by twirling the gather there are often spiral or circular patterns visible within the body of the glass that describe the lines of force inside the hot table as it was spun about. In some cases even the seeds, the small pockets of gas trapped in the glass, are aligned in the direction of the twirl. Panes of glass cut from a table are also relatively small since the table itself was small and so many parts of it were unusable.

One unlikely place to look for crown glass is in the reverse-painted lower glass panels of mid-19th-century ogee mantel clocks. The old glass was recycled as older houses were torn down and old furniture was discarded. Since the old glass was going to be painted, the distortion was not a problem.

By 1825 the old broad glass method of the 17th century had been updated and revised. Glass was gathered, blown and swung to create a cylinder as before but this time the cylinder was allowed to cool. Then it was scored down one side with a diamond and reheated. As it was heated the cylinder opened up and laid out into a relatively flat sheet after repeated annealing. This updated procedure resulted in much larger panes of glass than could be made by crowning. In 1871 William Pilkington introduced a machine that was able to swing a cylinder of hot glass that was as much as 25 feet long. Cylinder glass was the primary method of flat glass production until the turn of the 20th century.

While cylinder glass was an improvement over crown glass it still had its problems, which means we can readily identify it and relegate it to the last 75 years of the 19th century. It still has the small bubbles, the seeds, but instead of an internal directionality like crown glass, cylinder glass has a distinctive, randomly mottled surface appearance readily apparent in less expensive mirrors of the day and especially obvious when used in picture and portrait framing.

By 1900 the demand for even greater quantities of less expensive glass was met with the newest idea, roller glass. A continuous molten ribbon of glass was extracted directly from the furnace and forced between sets of constantly cooled iron rollers. This produced wide sections of cheap glass for both window and furniture applications. And fortunately left its own unique signature in the glass for our use. In addition to the ubiquitous seeds, a new element of distortion was now apparent – parallel lines left by imperfections in the iron rollers. The mechanically perfect parallel patterns of distortion are easily seen in house windows of the early 20th century and in the flat panels of glass in china cabinets and secretaries of the period. Any motion on the part of the observer will immediately highlight the pattern. Virtually all window and furniture glass was produced by the roller method for the first 60 years of the 20th century.

But while roller glass satisfied the demand for cheap window and furniture glass, plate mirror glass still had to be cast on an iron bed and ground and polished to achieve satisfactory results. The search for a better procedure continued.

The solution was left to another Pilkington, this time Alistair Pilkington of the Pilkington Glass Co. In 1959 he revolutionized the manufacture of flat glass by pouring a continuous, molten sheet of glass onto a shallow bed of very still, molten tin. The higher viscosity glass floated on the surface of the tin and spread itself out very uniformly as it was continually reheated. The thickness of the finished glass sheets was controlled by the rate at which it is withdrawn from the bed of molten metal. After further annealing the process resulted in a piece of glass with perfectly parallel surfaces and a surface smoothness to 1/25,000 inch. Only optical and scientific applications require further grinding and polishing.

This type of process creates what is called “float” or “fire polished” glass and is the method currently used to produce over 90 percent of the world’s flat glass.

Furniture glass has a lot to tell us about how it was made, when it was made and possibly if it is original to the piece of furniture in which it resides – if we learn to listen to it. The trick is to look AT the glass and INTO the glass, not through it. 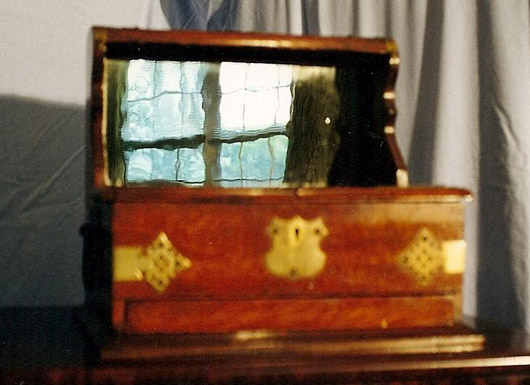 The ‘dimpled’ distortion pattern seen in the reflection in the inexpensive mirror glass of this circa 1890 jewelry box is typical of 19th-century cylinder glass, both in mirrors and in clear panels. 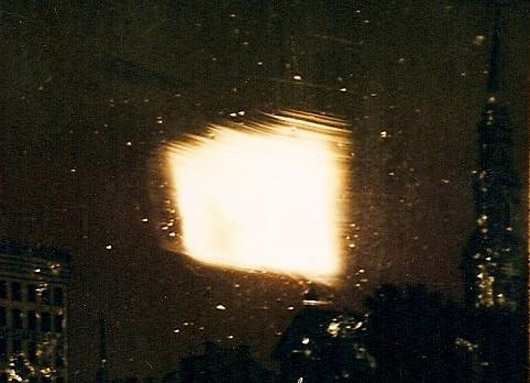 The telltale parallel curving lines of the crown glass making process can be seen in this close-up of an 1850 ogee clock painted panel. 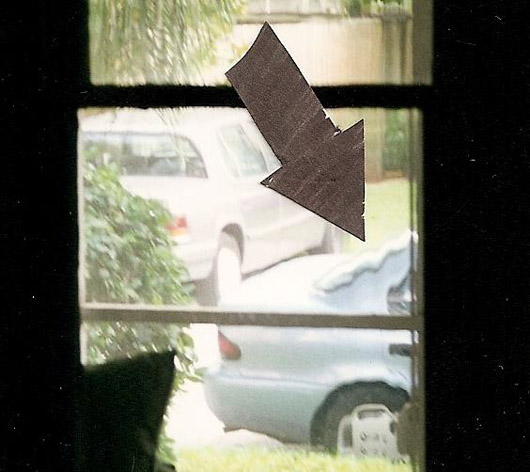 The parallel straight lines of distortion created by hot rollers as seen through this piece of early 20th-century, circa 1925, window glass.

Furniture Specific: Letter to the future