There’s little doubt that this is a genuine R. J. Horner & Co. label. The question is who put it on the back of the china cabinet.

Isn’t it exciting to go to an auction or a show and see a piece of furniture that actually has its maker’s name on it? I don’t mean Ethan Allen or Sears or Drexel. I mean somebody important – like one of the Stickleys or Hunzinger or Roux. Granted Roux’s marks are a little hard to find, but they do exist in the form of stencils in the beginning all the way to fancy engraved paper labels after 1850. In fact, contrary to common opinion a great many individual cabinetmakers and turners marked their work in one way or another. Over 1,500 have been identified and classified, many in recent years. At one point it was thought that Duncan Phyfe had marked as few as 12 of his works and as many as 16. There may be room for doubt on that subject because Phyfe used a greater variety of marks than most of his contemporaries and it seems unlikely he would have gone to so much trouble to mark so few pieces.
So here is one of the pieces of the great “provenance” puzzle right in front of your eyes in black and white. Mystery solved – or is it? What exactly does a label tell you and what does it not tell you? The one absolute thing it cannot tell you is that the maker named on the label did in fact make the piece. Why not? It says so right there, you say. Sure but who made the label and who put it there? The cabinetmaker? An apprentice? A dealer? A consignor to an auction? Taking a label’s information at face value is like believing the sticker on the windshield of a used car that says “Driven only on Sunday.” Those Sundays could turn out to be the ovals of NASCAR racing.

So how can you be sure that the label matches the actual maker and is truly part of the provenance? First you have to know a little something about the purported maker and what business he was in. A good example is the New Orleans cabinetmaker and wine merchant Prudent (aka Prudence) Mallard. He was born and trained in France and first went to America in 1829. But because New York did not suit his asthmatic condition he had moved to New Orleans by 1832. In the antebellum heights of New Orleans society he was famed as the maker of the best Rococo Revival furniture around. His signature pieces were the beds that fit only under the 18-foot ceilings of New Orleans mansions and area plantations. Those, coupled with armoires of sufficient space to hide a reclining illicit lover (according to one legend) made Mallard the toast of the town and his success enticed northern cabinetmakers like J. and J.W. Meeks to open retail branches in New Orleans.

But a little investigation reveals that Mallard was also an importer of fine European goods, including furniture, for his select clientele. He is reported to have owned several ships, which he loaded with cotton in New Orleans, unloaded in Europe and reloaded with furniture for the return trip. He advertised his importation facilities along with his locally manufactured furniture and his active upholstery business. But did he actually make any of the furniture that made him famous? There appears to be doubt on that subject. According to Stephen Harrison, former associate curator of decorative arts at the Dallas Museum of Arts and former curator of decorative arts at the High Museum in Atlanta, Mallard’s labels always said “manufactured by P. Mallard” or some variation of that phrase. Harrison contends that the word “manufactured” in this context simply means “assembled,” as in “uncrated and assembled.” Another interesting point is that there is no record of Mallard owning high capacity equipment and when Mallard’s business was liquidated in 1874 there was no steam-powered machinery capable of making large furniture. Maybe it had been sold previously or maybe it never existed.

Another pause for reflection occurs in the case of Robert J. Horner, the New York cabinetmaker and carver of so many outstanding examples of legendary winged griffins as decorative elements in his elaborately decorated and carved creations. After working as a clerk in a lace business Horner opened his own curtain and lace shop and then opened a retail furniture outlet in 1886. He soon began making his own furniture to sell and specialized in the Aesthetic Movement. Following that he turned out the many heavily carved pieces in oak and mahogany that utilized classical figures such as caryatids and the mythological creature the winged griffin as a primary element. 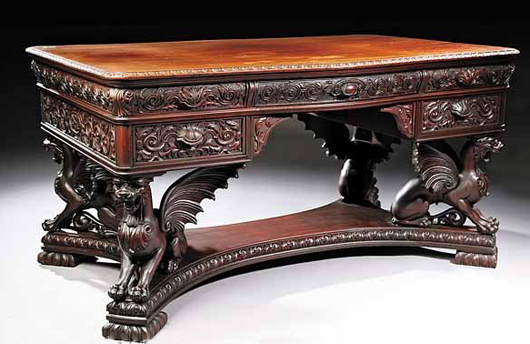 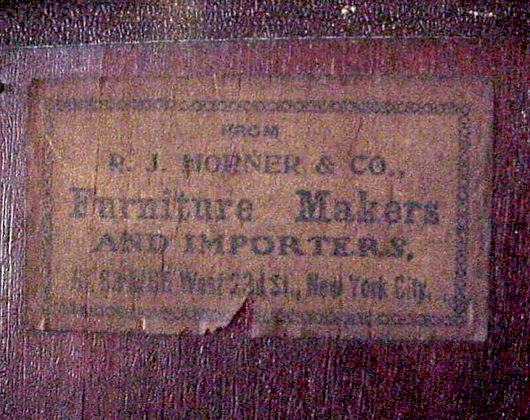 
His early labels merely read “From: R. J. Horner & Co., Furniture Makers, 61, 63 & 65 West 23rd St., N.Y.” but a slightly later label read “From: R. J. Horner & Co., Furniture Makers and importers” with the same address. How much product did Horner import and how much did he actually make? Take a look any weekend at how much furniture made by or attributed to Horner crosses the auction block around the country at various sales and make up your own mind whether that piece with the Horner label or attribution was actually made by Robert J. Horner. 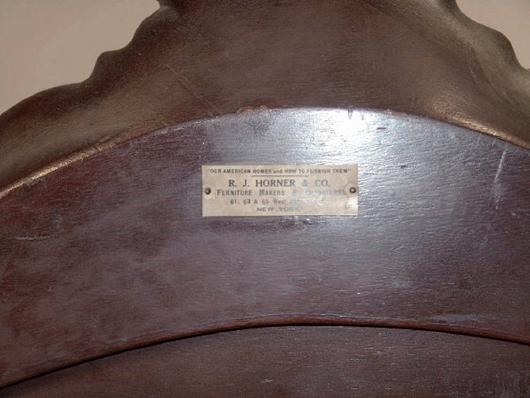 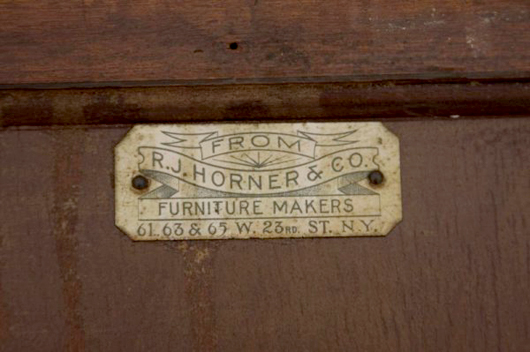 
Another consideration for a label is how it is attached. Horner again provides a good example. His earliest and most famous label was actually a small porcelain plaque tacked to a piece of furniture by brass tacks. Many of his later paper labels were also tacked on. I once went to an auction that advertised a genuine “signed” Horner carved china cabinet. Frankly the cabinet just didn’t look that sophisticated or elegant so I looked all over the piece for the label and couldn’t find it. I finally asked an employee about the label and he said it had fallen off but they still had it if I wanted to see it. You betcha. The torn paper label was in an envelope as advertised. I then asked to see where it was originally on the piece. I was shown a pair of tack holes on the back that did match up with the size of the label but there was no difference in oxidation in the surface under where the label purportedly was placed from the surrounding area. Even with a tacked on paper label I would have expected some variation in the color. I didn’t bid on the cabinet. 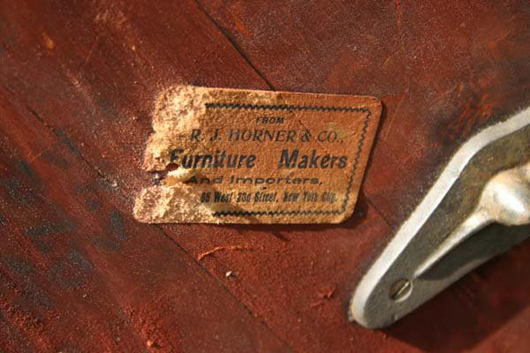 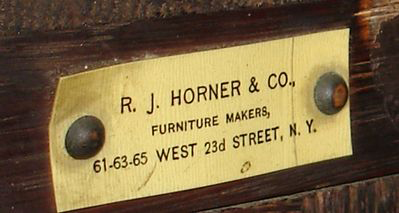 The correct oxidation appears under an R.J. Horner & Co. label on a corner cabinet from the turn of the 20th century. Image courtesy Fantasticantiques Inc. and LiveAuctioneers Archive.

Then there is the matter of the name itself. Is it the name of the cabinetmaker or the name of the retailer? As we saw with Mallard even in the 19th century there were furniture retailers of considerable size and influence and they often had the right to label a piece of furniture any way they chose, no matter who made it. An example of this can be seen in the venerable name of Wanamaker found on some very fine furniture. Wanamaker’s was an upscale retail department store in New York and Philadelphia and did not manufacture any furniture. John Wanamaker in Philadelphia founded Wanamaker’s in 1861 and the family retained control of the stores and the name until 1978 when all was sold.

Another example of a famous retailer sometimes mistaken for a maker, other than Sears of course, is Colby’s of Chicago. Colby’s was founded as a furniture maker in 1868 by John Colby and Jacob Wirts. Colby bought out his partner in 1879 and continued to build fine Renaissance Revival furniture. His two sons joined him in the business in 1881. By 1913 all three original Colby’s had died and the company was sold but it retained the Colby name. Soon after that all furniture-making operations ceased and the company became strictly a retailer. Several generations of Chicagoans grew up thinking that John A. Colby & Sons, later just Colby’s, had made their bedroom and dining room furniture because of the label.

Finally there has to be notice taken of fake labels. In today’s electronic environment it is not such a great stretch to digitally acquire the image of a famous cabinetmaker’s name. After that it’s a snap to print out a reasonable facsimile of the original label that would require some very close inspection to detect. And fake labels can be like bugs at a cookout – there is seldom just one.

Your best protection? Use your basic furniture knowledge to vet a piece described as being from a given period and in a given style. Make it pass the “smell” test. Then if there is a label that seems to verify your own independent conclusion, rejoice – skeptically.