One of the great cabinetmakers around the turn of the 20th century was R. Horner of New York. Did he make this clock case? The winged griffins look like his. The formed maiden supports look like his. The overall style of the carving looks like his. But he did not sign it so it is ‘attributed’ to his shop. Image courtesy of LiveAuctioneers.com Archive and Great Gatsby’s.

CRYSTAL RIVER, Fla. – I spend a great deal of my time answering questions for people about the furniture they just inherited, acquired, found or otherwise have an interest in. Of course the standard question is about value but many inquiries get past the mercenary part and want to know about the age of a piece. That’s always nice to know. It’s like value added to an already interesting piece and the clues to determining the age are fairly easy to work with. But some inquiring minds sometimes take it one step further and want to know who actually made the piece. That’s when it gets interesting.

The almost universal answer to the question is “Who cares?” Unless it has a label or a trademark it’s almost impossible to tell who made a particular piece of furniture. Of course there are exceptions. A Hunzinger patent chair is usually identifiable whether it is marked or not. And there are certain stylistic elements and certain techniques used in unique ways by a handful of readily identifiable craftsmen, like Lannuier and Phyfe, mostly from the 18th and early 19th century, when the individual craftsman was the key to quality. The Seymours and Goddards also fall in that category. But take a look at the inventory of any really fine American antiques dealership or the catalog of a good antique furniture auction and you will a see a number of descriptions that include the words “attributed to …”. That means that it certainly looks like a Thomas Brooks cabinet, or that it has all the right elements in all the right places to be a Prudent Mallard bed. It just doesn’t have the signature. Does that mean it wasn’t made by Mallard or Brooks or Horner? Certainly not but it doesn’t mean that it was made by them either. It just could have been. And in the case of some of these famous names, the “whether or not” can amount to big bucks and reputations can be established or demolished. But other than that does it really matter who made the piece?

It becomes even less relevant when the maker, if it can be identified, turns out to be a large manufacturer with factories in three or more cities. One example of that was the venerable company known as Heywood-Wakefield just after it absorbed Lloyd Manufacturing in 1921. Heywood-Wakefield was normally associated with its headquarters in Gardner, Mass., but in 1921 it had plants in Portland, Ore., Chicago, Ill., Menominee, Mich, Erving, Mass., and Wakefield, Mass. So knowing that a piece of furniture was made by Heywood-Wakefield in the 1920s doesn’t really answer the question of who made it or even where it was made. It was made in a factory on an assembly line. In essence it was made by committee. And that isn’t just a 20th century phenomenon.

Lambert Hitchcock had a factory with an assembly line in Connecticut in the 1820s and the Meeks family had a three-story factory in New York in the 1830s. They also had a wholesale outlet in New Orleans for the Southern trade. Did Lambert Hitchcock personally make Hitchcock chairs? Probably not. Did J. and J.W. Meeks actually make game tables and parlor sets? Again, probably not.

So why the need to find out who made a particular piece? Some inquirers feel the need to know the maker as an assurance of quality. They feel that an authentic “name brand” is superior to a generic label. In some cases that may be true but in many cases it isn’t. Two specific instances in the 20th century spring to mind. A company in Ohio started making furniture in the late 1870s. By the 1990s it had cranked out more than 30 million tables, making it perhaps the best-known table maker in America. It was a true “brand name.” The name? Mersman Brothers. But is the Mersman mark an assurance of high quality? Not really. The tables are generally well made for the market they sought to conquer but they are not examples of what could be called high quality when compared to some other manufacturers. The Mersman mark just means the table was made by a large company that made large numbers of tables. The name had a better reputation than the table.

Another example was one of my favorite companies, Berkey & Gay of Grand Rapids, Mich. Berkey & Gay was a real success story in the late 19th century. It was one of the prime exhibitors at the Centennial Exhibition in Philadelphia in 1876, proudly showing off the massive Renaissance Revival bedroom sets made for the New York hotel trade and for the industrial barons of the period. After the turn of the century it discontinued its retail operations and became strictly a high-end manufacturer, building large departments of skilled carvers and artists to turn out the company’s exclusive designs, many of which required a high degree of hand craftsmanship. Between World War I and the Depression the company reached its zenith of production in high quality bedroom and living room suites. In the depth of the Depression in 1931 sales declined dramatically and the company was forced to declare bankruptcy. It reopened in 1935 under new management and soldiered on until 1948 when it finally closed for good. So, is the Berkey & Gay signature round trademark an assurance of quality? No. The company never regained its true form after the reorganization of 1935 and the products of the second incarnation are decidedly inferior to earlier products. In this instance you have to be familiar with the minor variations in the trademark to correctly identify the era of production.

The case of Mersman is that of one that never quite reached the pinnacle of quality. Berkey & Gay is a case of reaching it and losing it. Both are cases of well-known brand name makers who prolifically marked their wares and are easily identifiable. But then you have to know something about the company to take advantage of the information.

What it all boils down to is that you are on your own in trying to determine the quality of a piece of furniture. Since most of us will never see a Duncan Phyfe paper label or John Goddard’s inscription we must rely on the basic techniques of furniture inspection that we have accumulated over time.

But there is at least an additional reason for searching out the identity of the maker of a piece that has nothing to do with quality assurance or bragging rights about owning something made by a given cabinetmaker or manufacturer. It probably falls in the same category of why people do genealogical research. It doesn’t make any money and it can be time consuming and expensive. There is no guarantee of success and when the seeker does find the answer what have they found? Probably nothing of great import but it is one more loose end in their lives that they have tied down. Finding the maker of a piece often seems to give the seeker a feeling of completion and accomplishment. They have now found out as much as is reasonably possible about the family heirloom or about the newest family treasure. Now they can start to work researching the story about how that table got from New York to Kansas and who wrote that nasty little ditty underneath. Now it gets to be fun.

One of the great cabinetmakers around the turn of the 20th century was R. Horner of New York. Did he make this clock case? The winged griffins look like his. The formed maiden supports look like his. The overall style of the carving looks like his. But he did not sign it so it is ‘attributed’ to his shop. Image courtesy of LiveAuctioneers.com Archive and Great Gatsby’s.

This method of marking chairs was used in Lambert Hitchcock’s factory from 1825 to 1832. Does that mean he personally made this chair? Probably not. 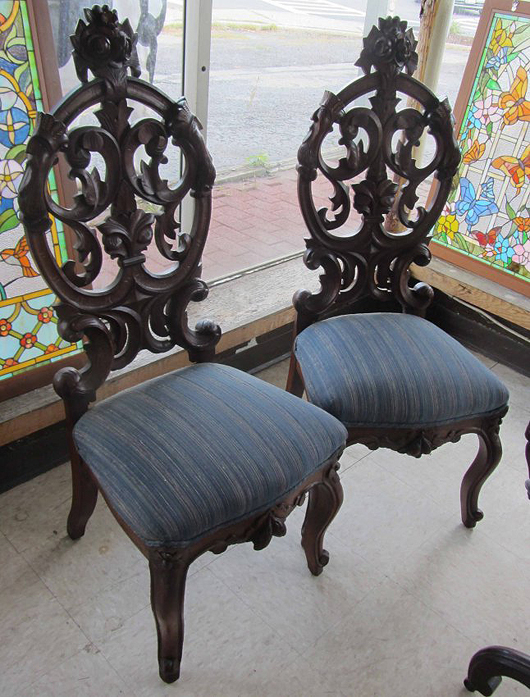 J.H. Belter had a factory in Manhattan populated with young immigrant German woodworkers. Did he or they make these two chairs? Without a label they were sold as ‘belter quality’ but without a positive attribution. Image courtesy of LiveAuctioneers.com Archive and Great American Auction Services. 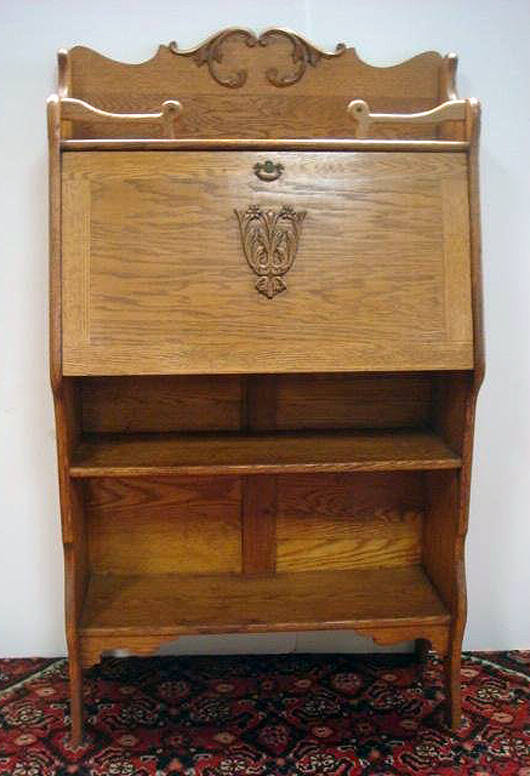 This oak drop-front desk has many of the signs of Larkin manufacture including applied decorative molding and golden oak construction. Since it doesn’t appear in the Larkin catalog and doesn’t have a label it can only be said to be ‘Larkin-style.’ Image courtesy of LiveAuctioneers.com Archive and Phoebus Auction Gallery. 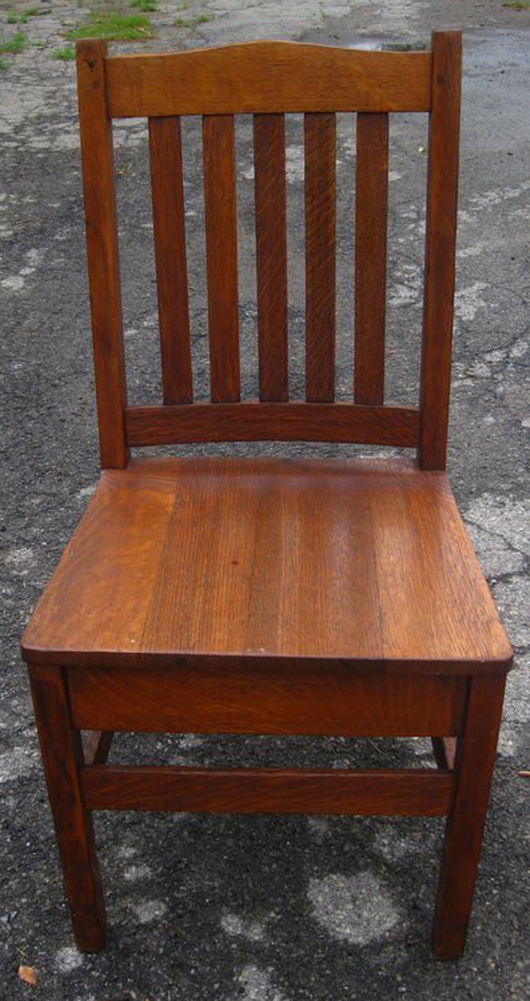 This oak chair was attributed to Stickley Brothers. Maybe, maybe not. Probably not.