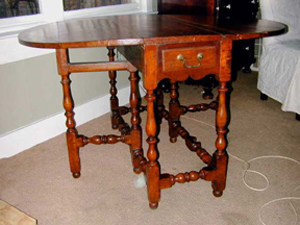 The gatelegs don’t leave a lot of room for human legs under the table. Fred Taylor photo.

In today’s contemporary dining room, whether in traditional styling or a more modern look, the usual centerpiece is the table. And that table usually is in a well-defined form that consists of two platforms joined in the center, supported by a series of legs or pedestals. The two platforms can then be separated in the center, opening along a slide mechanism that allows the platforms to receive additional leaves, stored separately, in the center cavity to expand the length of the table. Pretty simple, pretty universal and pretty ho-hum. What if you need a different shape or a different configuration for a special purpose of event?

The idea of a stationary dedicated eating surface is a relatively recent concept. The Romans mostly never bothered with the idea. All they needed was a couch on which to recline and someone to bring them food on a tray. On second thought that sounds pretty familiar doesn’t it? And when the Greeks and Romans did bother to make tables they looked a lot like altars. By the Middle Ages dinner time had graduated to the great room where boards laid on trestles acted like dining tables until they were cleared away to make room for dancing or whatever.

Then came the forerunner of the modern dining room table, the dormant table. This table was a stable, stationary, dedicated table that did not want to be moved and did not disassemble easily. That was called the “refectory” table in the time of Henry VIII because it originated in the eating halls of the monasteries. But that table had even less flexibility in size and shape than the modern table. In fact it had none. That little problem was quickly addressed and resulted in the “draw table” of the 16th century that became common in Italy, France and England. The draw table consisted of a slab top like the refectory table, but it two expansion leaves under each end that could be “drawn” out from under the slab to extend the length of the top. The idea surfaced off and on again for centuries, last appearing in the American Depression era as part of the Colonial Revival.

But what other choices do you have in the area of flexible, expanding eating surfaces?

The first choice is the venerable drop-leaf table with attached leaves on each side that fold down and out of the way. The oldest form of the drop leaf is the gateleg with swinging extra legs that reach out to support the drop leaves while in their horizontal position and fold neatly into the base when not in use. A slightly later variation is the swing-leg table. This form did not have the extra horizontal bar at the bottom of the mobile leg. It was simply a movable leg – less strength but more room below. But that’s still a lot of legs under a table and someone often has to straddle the gate on their end of the table. The William and Mary period of the late 17th century brought the innovation of the “butterfly” drop leaf. It had the same basic configuration as the gateleg but the leaves were supported by gates in the shape of a butterfly wing that were attached to the top and bottom stretchers of the table base and did not reach the floor, saving precious legroom for human use. The modern version of the drop leaf uses a spring-loaded two-section metal brace to support the drops. They snap into place by themselves when the leaves are opened up into place.

After the drop-leaf table came a succession of expansion tables. Since the idea of a “dining room” was not incorporated into the design of most houses until the 19th century, flexibility and alternative uses were required of dining surfaces. One way to accomplish this was demonstrated by Thomas Jefferson in his design of Monticello. There was large space designated for multiple uses, similar to the great room of the Middle Ages. It was lined with small rectangular tables that functioned as game tables, writing tables and occasional conversation pits. For large gatherings for dinner all of the small tables were aligned, covered and treated as one big dining surface. A variation of that idea was the “D end” banquet table. It consisted of one or more square or rectangular center sections with drop leaves. The half circle ends, the “D’s”, were formed by the addition of a half round console table at each end that often functioned as a foyer table when not in use. The sections were held in place by brass “U”-shape forks inserted into brackets under the edge at each end of each table.

An even more clever use of space was the tilt-top dining table. The top of each half of the table, supported by a single pedestal, could be unlocked and tilted vertically to store out of the way against a wall. When the halves were tilted down they could be joined with brass forks to form a single modest-sized table and they had hidden supports for the addition of leaf sections between the halves to expand the table.

Another type of expansion table was the “accordion” table which sported an expanding leaf support structure attached to the center section. The support structure was a series of flat boards joined at the end that expanded like an accordion’s bellows as the table halves were separated. This arrangement was first used around the turn of the 19th century and was used throughout the century.

Toward the end of the century what we now regard as the standard expansion table came to light. It featured a set of interlocking wood slides that allowed the table to open smoothly and easily to accept additional leaves. The slides were usually made of a hard wood such as beech, maple or oak and were screwed into the table from below. As the need for larger tables became apparent it was obvious that just the standard four corner legs would not support the table expansion of more than one or two leaves. The table would sag of its own weight. The solution was obvious. There had to be a center leg or center pedestal to support the middle while the legs supported the ends now separated by many additional leaves. But that presented a new problem. How could a center pedestal or leg be made to stay in the center while the ends expanded if everything was attached to the slider mechanism? The center section would have to accompany one side of the table or the other. The answer was simple. Make all the slide mechanisms with three, or some other odd number, of sections. That way the center section of the slide, the odd number, would always remain in the center as the table expanded, allowing the center leg to support the sagging weight of the table.

Then there were the tables that combined more than one of the expansion methods. One of the best examples of this was the so-called “Duncan Phyfe” drop-leaf table of the 1930s and 1940s. It looked like a standard drop-leaf table, but the double center pedestal would split as the table was expanded on a slide mechanism for the addition of more leaves. This type expanding table served the expanding families of post World War II very well. Another innovation solved the problem of leaf storage. During the Depression era some table makers created a leaf that folded in half and slid down a track to store under the table out of harm’s way when it was closed. This was even combined with narrow sofa tables that could open on slide mechanism and reveal a folded leaf to provide extra serving space for holiday meals and parties.

But the real innovations came in disguising the table altogether as some other piece of furniture, opening up additional space in the crowded quarters that the Depression sometimes required. One variation of this was commonly but erroneously called a “plantation.” It looked like a simple fold-over game table but the fold-over top section was not attached to the lower surface. Instead it would open as much as five or six feet on a slider to accept leaves and become a full-length dining table. The masters table deception were the United Table Bed Co. of Chicago, the makers of Ta-bed and Saginaw Furniture Co of Sparta, Mich., that made cabinets that opened into dining tables called the Expand-o-matic.

If you feel trapped in your dining room by the limitation of the size or shape of your table, take a look at some historical precedents in the dining table area. Someone has already had, and solved, your dilemma. 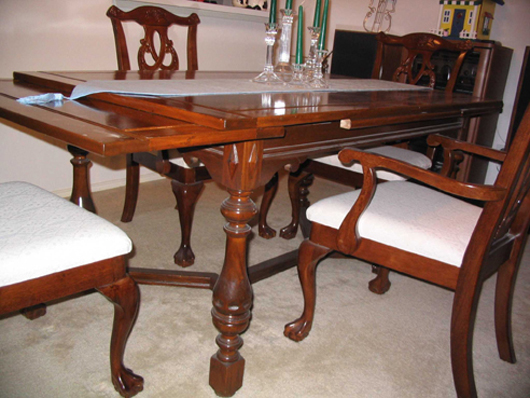 This 20th-century version of the draw table shows the expansion leaf partially extracted from below the table top. Fred Taylor photo. 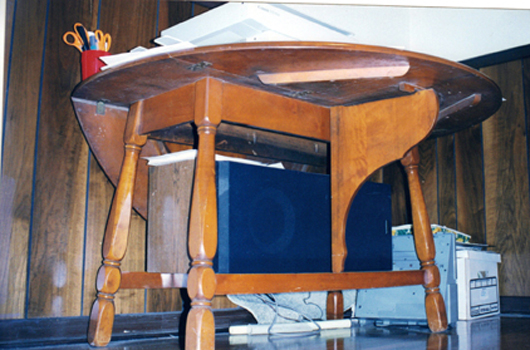 This Colonial Revival reproduction of a William & Mary-style butterfly table shows how the drop leaf is supported by the moving &quot:butterfly.&quot: (Fred Taylor photo 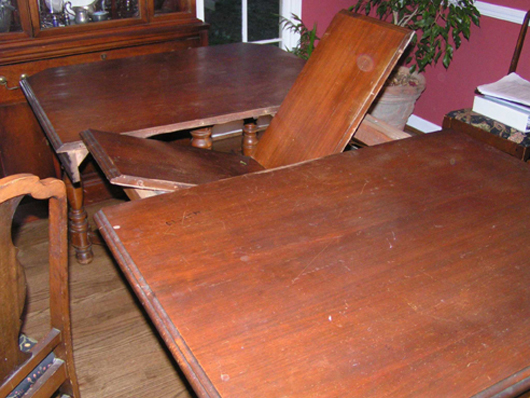 This Depression era table stores its leaf in the middle under the top by folding it in half. Fred Taylor photo. 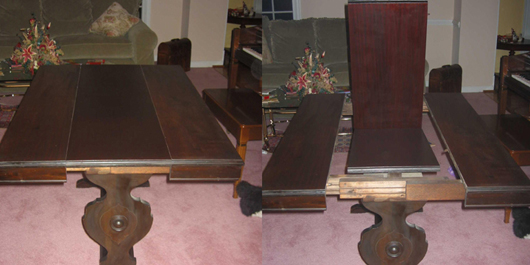 This clever little sofa table not only is expandable for use as a server or breakfast table, it even stores its own folding leaf below. Fred Taylor photo.

This “Expand-o-matic” table was made by Saginaw. The top drawer and frame of the cabinet pull out to provide the structure for a dining table. Fred Taylor photo.