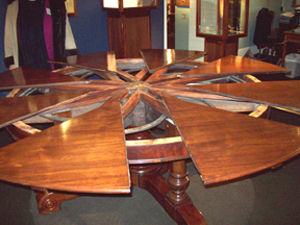 This is the famous "Jupe’s pattern table" seen at M. S. Rau Antiques in New Orleans.

The solution to extending the eating surface of a dining table beginning in the 16th century was the addition of extra surface space in the form of leaves. These ingenious extra parts could either be withdrawn from under the table top or attached to the main surface and could be raised or lowered – the famous “drop leaf.” Everything after that was pretty much based around how to support the drop leaf when it needed to be raised.

While the solutions were clever, including the butterfly support, the gate leg and the swing leg, the fact remained that the extension leaf itself was still a part of the table. Although suspended in some fashion, hanging off an edge or side, it was still attached to the table. That made a seemingly small table, when the leaves were not extended, extremely heavy for the useable surface area. Why not just solve that problem by removing the leaf from the table until it was actually needed?

Naturally that brought up another whole set of problems/questions/opportunities that related to the reattachment of the leaves when needed such as how to attach them to the table, how to support them if necessary and what to do with them when they were not needed. One solution appeared in the late-Georgian period around 1800 in the form of a two-part pedestal table with two matching but separate loose leaves. They were fitted to the main table using a series of interlocking shallow square mortise and tenon joints to properly align them. They were then secured to the table itself on both sides by the use of brass forks that engaged custom-made fittings below both the leaves and the table top. If only one leaf was to be used, it could be adequately supported by a series of wooden turn buttons mounted below the top that supported the leaf at four points when installed. When more than one leaf needed to be used, another pedestal had to be added that could offer midline support for the two leaves in place, essentially creating a cumbersome three-pedestal table.

At the beginning of the early Victorian period, other ideas began to emerge for the support of extension table leaves. One rather clever and radical but impractical idea involved an exploding round table with pie-slice-shaped triangular leaves developed by Johnstone, Jupe & Co. of London. The so-called “Jupe’s pattern” table used a segmented top in two diameters mounted on a lower brass plate.

Then a breakthrough came during the reign of George IV in the 1820s. During that period a dining table surfaced that had a telescoping frame and could support up to five additional leaves. Now there was an idea to run with. Other exotic ideas were created with some success stories like the expanding accordion frame of the Empire period that was both complex and delicate, and it, like most of the others, did not really quite fill the everyday bill for a couple more decades.

Around the middle of the 19th century, the standard extension dining table had a telescoping frame of some sort. By the third quarter of the century, it had evolved into a set of sliding rails mounted under the top surface that allowed the two ends of the table to be drawn apart while staying in proper alignment and at the same time providing built-in support for the leaves. Early sliding rails were made of smooth hardwood boards contained in small iron frames that controlled the lateral movement while allowing extension along the length.

By the turn of the 20th century, the table slide had been improved with the addition of grooves cut along each side and a butterfly shaped block of wood inserted in the grooves that kept individual boards attached to each other and able to move on a very narrow path that allowed only longitudinal movement. This made the opening operation easier and quicker and encouraged the use of even more leaves. But the reality of the market at the time forced a change. So much furniture was being retailed by the mail order houses like Sears, Ward and Larkin that ways had to be found to cut the weight of the freight. One way to cut was to trim down the size of the boards used in the slides.

That solved one problem but created another, since now, in some cases, the slides were not sturdy enough to provide support for the leaves. The obvious answer, like in the case of the Georgian pedestal table, was to add another pedestal, but now it was complicated by the presence of the slides. The solution was to add not another pedestal but simply another leg on a support that was attached to the slides. But since the additional leg had to remain in the center of the table when the table was opened but still had to be attached to the slides, how did that work? The answer was simple and obvious. There had to be an odd number of boards in the slides. That way the center board could ride on the other rails but it was not attached to the table top. It simply floated under the table and remained in the center along with the fifth leg when the table was expanded.

So far so good. But now what to do with the extra leaves when they were not in use? One answer was to build a custom-made case to carry and store the leaves – great for flat leaves, a little inconvenient for leaves with skirts. An even more innovative plan showed up in the 1930s. This involved having the leaf installed in two hinged sections in the table on a set of hardware that allowed the leaf to fold in two and slide under the open space in the middle. When the table is closed, it is out of sight and out of danger. But that innovation was limited to the use of one leaf.

And if you don’t have a custom case for the leaves where should they be stored? Not leaning against the wall in the dining room closet where they probably are. Eventually they will develop a bend. They should be stored flat on their backs, properly wrapped in a sheet under the bed. If the leaves have skirts they should be stored on their tops. If left sitting on the skirts, they will develop a sag.

Fred and Gail Taylor’s DVD titled Identification of Older & Antique Furniture ($17 + $3 shipping and handling) and a bound compilation of the first 60 columns of “Common Sense Antiques by Fred Taylor” ($25 + $3 shipping and handling) are also available at the same address. For more information call 800-387-6377, fax 352-563-2916, or e-mail info@furnituredetective.com. All items can also be purchased directly from the Web site. 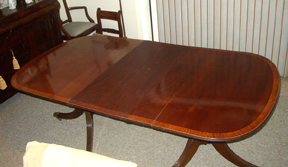 This late Georgian pedestal table has one large leaf inserted in the middle. 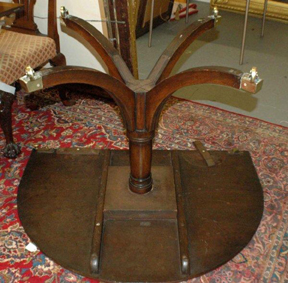 This shows the turn button wooden leaf supports under the table at the top edge of the photo. 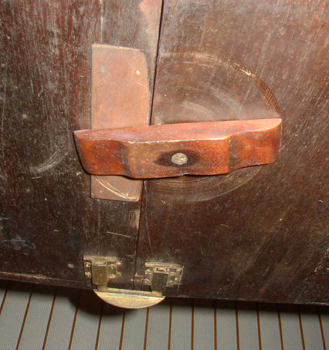 This view from under table shows the leaf in place, the turn button extended and the brass table fork in place at the bottom. 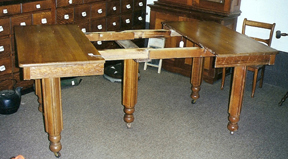 By the turn of the 20th century, the table needed extra support in the form of a fifth leg mounted to the slides. 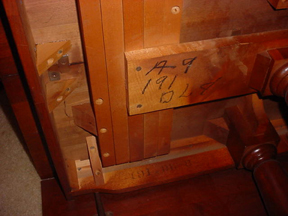 This shows the slides in closed position under the table with the fifth leg support attached to the center element of the slide assembly. 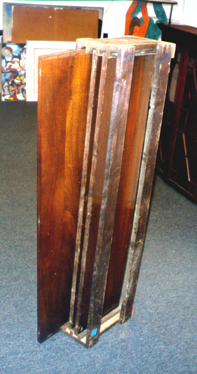 This is a convenient way to store flat leaves. 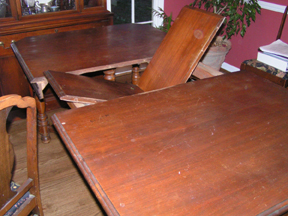 This folding leaf arrangement shows one idea for leaf storage.