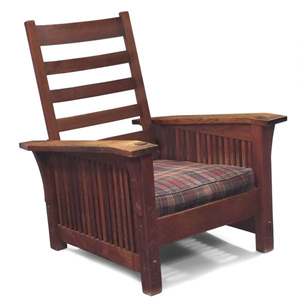 CRYSTAL RIVER, Fla. – At the turn of the 20th century the growing giant that would become industrial America was saddled with two primary furniture styles, Golden Oak and Colonial Revival. Of course there were other looks like the last bits of Renaissance Revival and the beginning struggles of Art Nouveau, but they were secondary to the two majors and as with most styles and periods both were fashions influenced by events outside the realm of furniture.

The Golden Oak period came about as the result of the diminished availability of walnut stock to make furniture. Walnut had been the primary wood of the Victorian revival styles, Rococo and Renaissance, supplemented occasionally by rosewood and other exotics. As the supply dwindled the next most commercially viable product was oak, especially when the concept of quarter cutting came into fashion, revealing the incredible figuring within the wood.

The Colonial Revival was born as the result of rising patriotic fervor kindled by the Centennial Exposition in Philadelphia in 1876. The stalwarts of Victorian society believed that if furniture of the Colonial period could serve and inspire such gallant and true men as George Washington and Thomas Jefferson, who guided the American Revolution, it would surely bring a sense of value, security and inspiration to late 19th century family members.

But there was another revolution in the wind and this time it would travel in the opposite direction, originating in England and migrating to America where it would become a part of the “American Look” of the 20th century and beyond.

That revolution of course was the Arts and Crafts movement, the brainchild of John Ruskin (1819-1900) and William Morris (1834-1896), both men of vision who were frustrated with mid-century Victorian over-indulgence, were fierce critics of the factory mass-production system and sought a return to simpler times and more honest representations of the work by real craftsmen. They were joined in spirit by Charles Locke Eastlake in the 1870s and 1880s.

By then the ideas of the movement had filtered to America and their writings were readily available. Morris began to sell his wallpaper and textile designs in Boston as early as 1873 and artisans and workshop groups were turning out their own innovations in the spirit of the movement around the country by the end of the 1870s. In the 1880s Oscar Wilde toured North America espousing the new movement, especially influencing architectural design and the beginnings of the furniture revolution.

About the same time a group of brothers got together to form a new furniture business in Binghamton, N.Y. Three of the five Stickley brothers went into the business under the name Stickley Brothers Co. in 1884. The original founding brothers were Gustav (1858-1942), Albert (1862-1928) and Charles (1865-1928). The two youngest brothers not in the original company were John George (1871-1921) and Leopold (1869-1957). It was the first of many variations of Stickley companies and the first of many combinations of the Stickley brothers over the next 70 years and they were to have some important input into the American Look of the 20th century.

As the oldest, Gustav was the most influential and he became quickly interested in the new Arts and Crafts from England as the original Stickley Brothers Co. began to dissolve. Gustav had been trained as a stonemason by his father but he longed to work in wood and went to work in his uncle’s chair factory in 1870. He left in 1884 to join his brothers in the new company. Charles left first, around 1891, to join his wife’s family business, which became Stickley-Brandt in Binghamton, N.Y. Then Albert left the family business in 1891 and teamed with brother John George to form Stickley Brothers Furniture Co. in Grand Rapids, Mich. The name had become available when Gustav renamed the original company Gustav Stickley Co. Their company made primarily Colonial Revival furniture in the beginning. That left Gustav alone in the original business.

He decided he needed to go to the source to understand the new movement and in 1897 he went to England to meet Ruskin and other important thinkers of the moment, even though Morris had already died by this time. He returned to America in 1898 devoted to the new concept, founding a new company, United Crafts, in Eastman, N.Y. His early work in the Arts and Crafts style had an Art Nouveau influence coupled with the desire to follow Morris who had proclaimed, “So I say our furniture should be good citizens’ furniture, solid and well made workmanship … Also, except for very moveable things like chairs, it should be made of timber rather than walking sticks.”

But while Gustav worked diligently, he received little acclaim for his work. A major retailer had beaten him to the punch in introducing the new “Mission” style. Frank Tobey (1833-1913) formed the Tobey Furniture Co. in Chicago in 1856 and became one of the leading retailers in the Midwest. In 1890 he introduced a Mission line of furniture designed inhouse by his employee George Clingman, based on the new ideas of Arts and Crafts. It was marketed as “careful workmanship … having no veneers, no machine carving or stamped ornaments” and was said by Tobey to be “an unconventional style for unconventional people.” In October of that year Tobey agreed to aggressively market a line of furniture built by the then relatively unknown craftsman named Gustav Stickley. The furniture, consisting of 75 oak pieces including tables, chairs, settees, tabourettes and desks in three stains, Tyrolean green, gun metal gray and grayish brown, was touted as “New Furniture.” It was sold unmarked except for the Tobey logo. It was a smashing success and by the end of the year Gustav terminated the contract and made his own line of Mission furniture under the United Crafts name but with his personal logo.

Gustav’s furniture closely adhered to the principles of the early movement in conjunction with his sense of form, proportion and color. It was simple, functional and sturdy and it honestly revealed its construction details in exposed tenon and key joints and visible dowels. The furniture, made of American oak, had the appearance of handmade work and the conception was fostered by Gustav. But therein lay a conflict for him.

The tenets of the Arts and Crafts movement stipulated that most of the work be done by hand, not by machinery. While this produced very nice work it also meant that not enough product could be economically produced to support the craftspeople in the business, as the English workers soon discovered, followed by the Roycrofters.

While the English movement took on an elitist cast with goods too expensive for the common people, Gustav decided to break new philosophical ground by combining the quality of handmade goods with the economy of labor-saving machinery to make his work available to everyone. It worked fantastically but to his long-term detriment.

Gustav’s Mission style became wildly popular and he formed his Craftsman Workshop in 1904, the same year he dropped the “e” from his name. The problem was that after he demonstrated that machinery could be applied to production in a manner that could result in furniture with a “handcrafted” ambience, everyone decided to get on the bandwagon. That included Stickley Brothers in Grand Rapids that came out with its line of Mission in 1902 calling it the “Quaint Arts and Crafts” line. Quaint was the term used by the English for Arts and Crafts work.

John George, one of the founders of Stickley Brothers, left Grand Rapids in 1902 and teamed with another brother, Leopold, to acquire an existing business in Fayetteville, N.Y., and renamed it the Onondoga Shops. Four years later it reincorporated as L. & J.G. Stickley. They too copied Gustav’s designs and entered the Mission market full force in 1905 with a line of furniture described by them as “simple furniture built along mission lines.” They joined a host of other manufacturers already in that boat including Grand Rapids Bookcase and Chair Co. with its “Lifetime” line of Mission furniture, Limbert with its line of Dutch influenced Mission, and Michigan Chair Co. with a line of English flavored Mission. As early as 1908 the style worked its way into the Larkin Soap catalog, awarding a solid oak Mission-style rocker for five Larkin certificates or free with a $10 purchase of soap. It had appeared in the Sears catalog before that.

In the long run Gustav could not compete successfully with manufacturers who did not espouse his tenets of high quality and craftsmanship. It seemed that the low price leaders had won again. Gustav declared bankruptcy in 1915 and his brothers Leopold and John George bought him out, continuing the business as the Stickley Manufacturing Co.

But once again Gustav had demonstrated, albeit unwillingly, that he was ahead of the curve. By the end of World War I the appetite for Mission had all but disappeared and all the other manufacturers moved on to the next big thing. In this case it happened to be the previous and soon to be again “big thing” of Colonial Revival. Stickley Brothers in Grand Rapids established its enduring line of Quaint furniture following Quaint Arts and Crafts with Quaint American, Quaint Tudor, Adam Colonial and Peasant lines. In 1922 Leopold Stickley announced the introduction of the Cherry Valley Collection, a line of reproduction furniture based on traditional New England and Pennsylvania furniture that firmly planted L. & J.G. Stickley in the Colonial Revival camp for the rest of the century. The vast majority of the American furniture industry followed suit with the occasional diversion to Art Moderne or Mid-Century Modern.

Gustav Stickley had the creativity and foresight to try something new and in that endeavor he succeeded in grand fashion popularizing a style and look that dominated the country for two decades. But beyond that he demonstrated that the use of machinery could co-exist with quality products. While a great many manufacturers did not adhere to the idea as well as they could have, enough did so that affordable quality furniture was available to most Americans throughout the 20th century. In that regard it could be said that Gustav Stickley was responsible for the “American Look.”

Visit Fred’s newly redesigned website at www.furnituredetective.com and check out the new downloadable “Common Sense Antiques” columns in .pdf format. His book How To Be a Furniture Detective is available for $18.95 plus $3 shipping. Send check or money order for $21.95 to Fred Taylor, P.O. Box 215, Crystal River, FL, 34423. 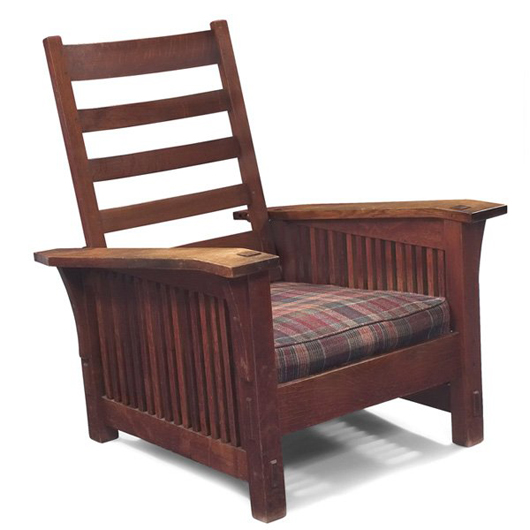 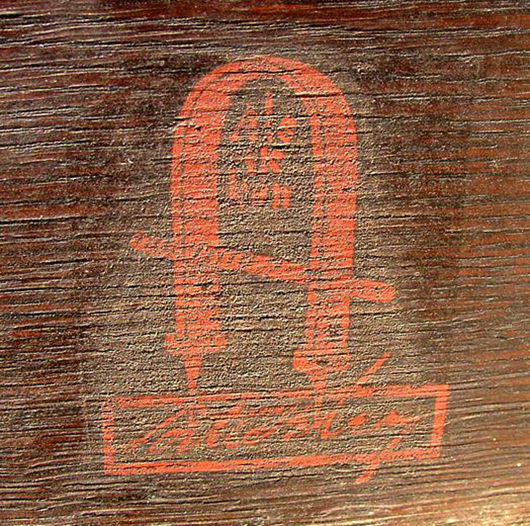 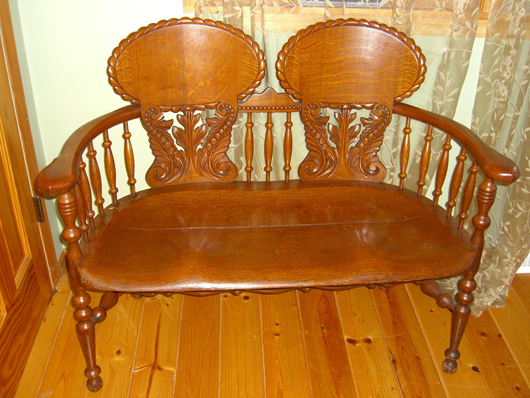 Loveseat was made Stickley-Brandt around 1900. Fred Taylor photo. 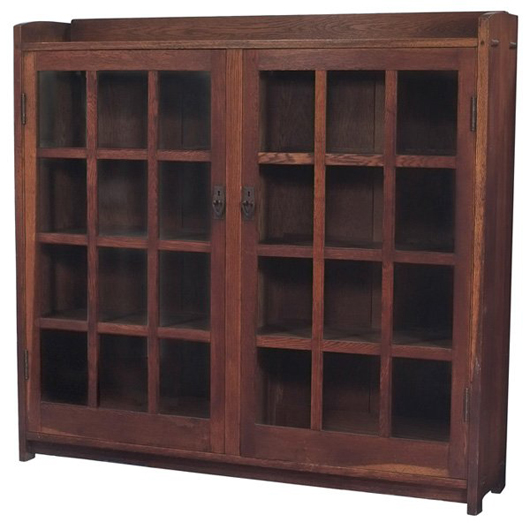 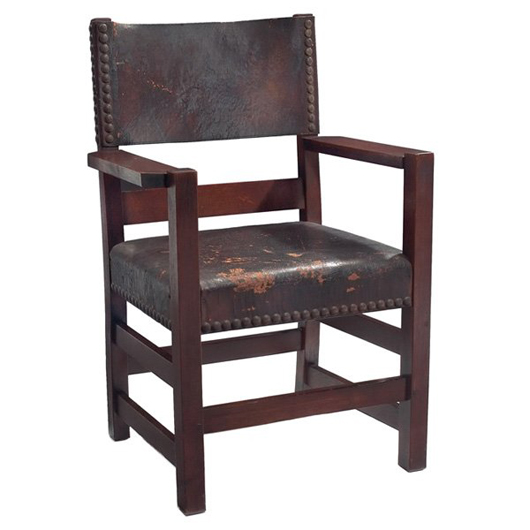 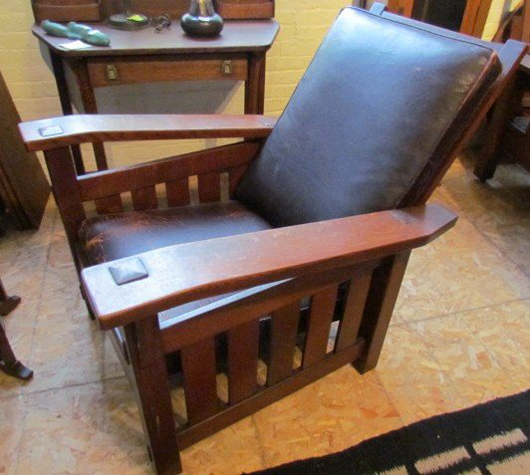 This Stickley Brothers Quaint Morris chair shows a remarkable resemblance to Gustav’s no. 369 Morris. Image courtesy of LiveAuctioneers.com and Royka’s.