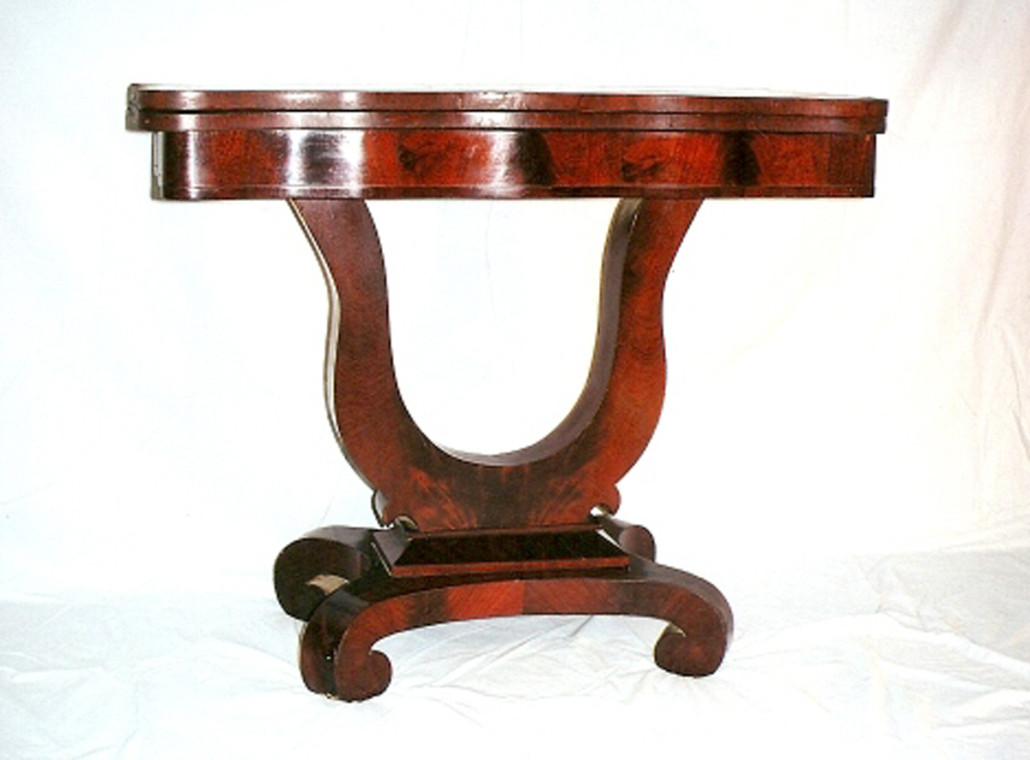 CRYSTAL RIVER, Fla. – I frequently get questions from readers inquiring about antique furniture, theirs or pieces they are considering making theirs. Of course the primary question is: “What’s it worth?” (which opens another entire series of questions like: “To whom?” “Where?” “Under what circumstances?” “When?” etc.) But there are usually other secondary questions like: “How old is it?” “What style is it?” and “Who made it?”

The most straightforward of the questions might seem to be the one about style. All you need is a good style reference book like Joseph T. Butler’s handy volume Field Guide to American Antique Furniture published by Henry Holt. I own four copies of it in various degrees of degradation from constant use and traveling. It is a classic reference book uncluttered by tacky color photos. It is simply extremely well done line drawings of actual examples of each style done by the talented Ray Skibinski. There is even a section in the book that tells you where the original pieces are located if you need to see them that badly. Of course no single volume can contain it all but this one makes American styles much easier. And with this book what else could you possibly need to determine the style of an American piece of furniture?

Alas, as with most things, it is not always that simple. There are always gray areas, exceptions to the rules, ifs and buts and just plain mysteries. Here are a couple of examples of stylish confusion based on elements of the style, the name of the style, historical anomalies or just plain ignorance.

A reader recently sent some photos of a sofa and chair with the usual inquiries about style and period. 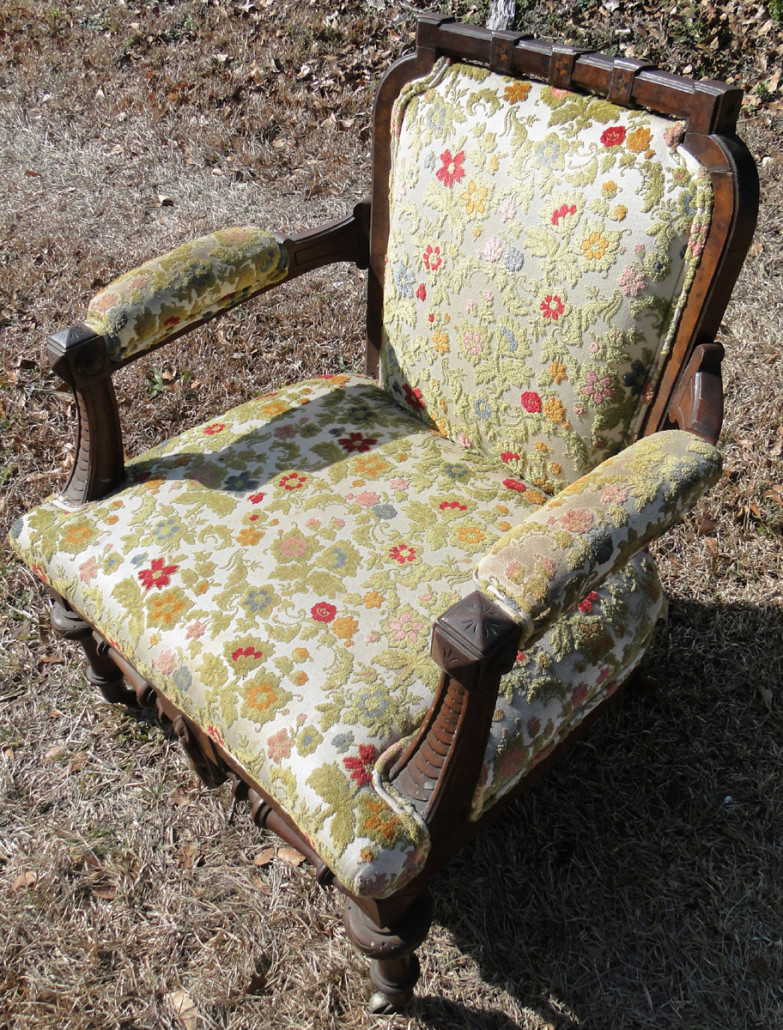 Is this armchair Eastlake or Renaissance Revival?

At first glance this chair looks like a no-brainer call for Mr. Eastlake. It is squarish in shape with geometrical cutouts, shallow incised carvings and geometrical inlay work. Piece of cake. Chair case is closed. 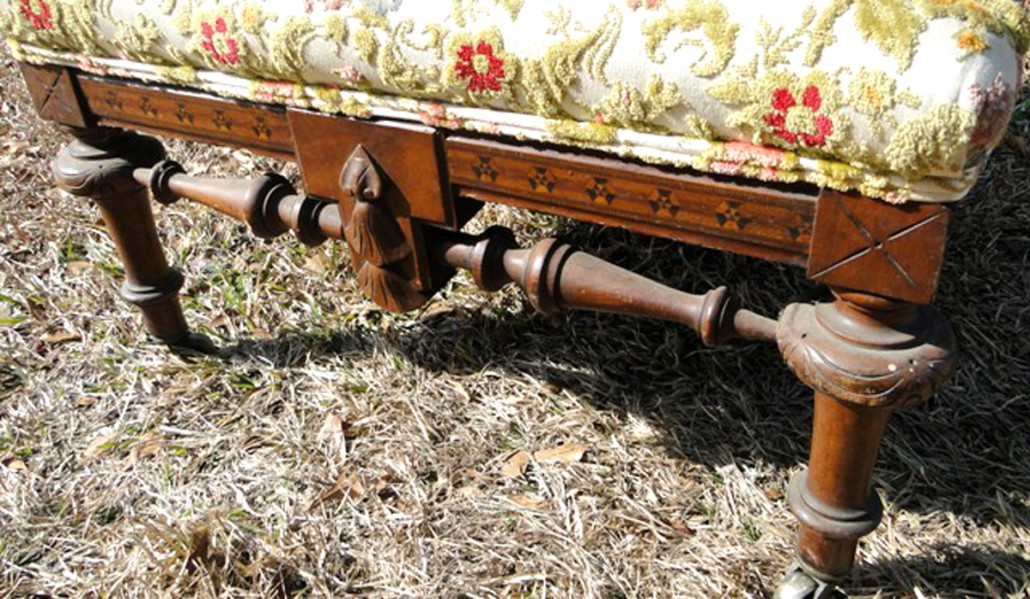 The stretcher between the horizontal disks growing out of the legs is a purely Renaissance element.

But wait. Take a look at the entire chair. What’s all that stuff below the leading edge? That sure looks like a Renaissance Revival-style stretcher between the horizontal disks growing out of the legs – a purely Renaissance element. 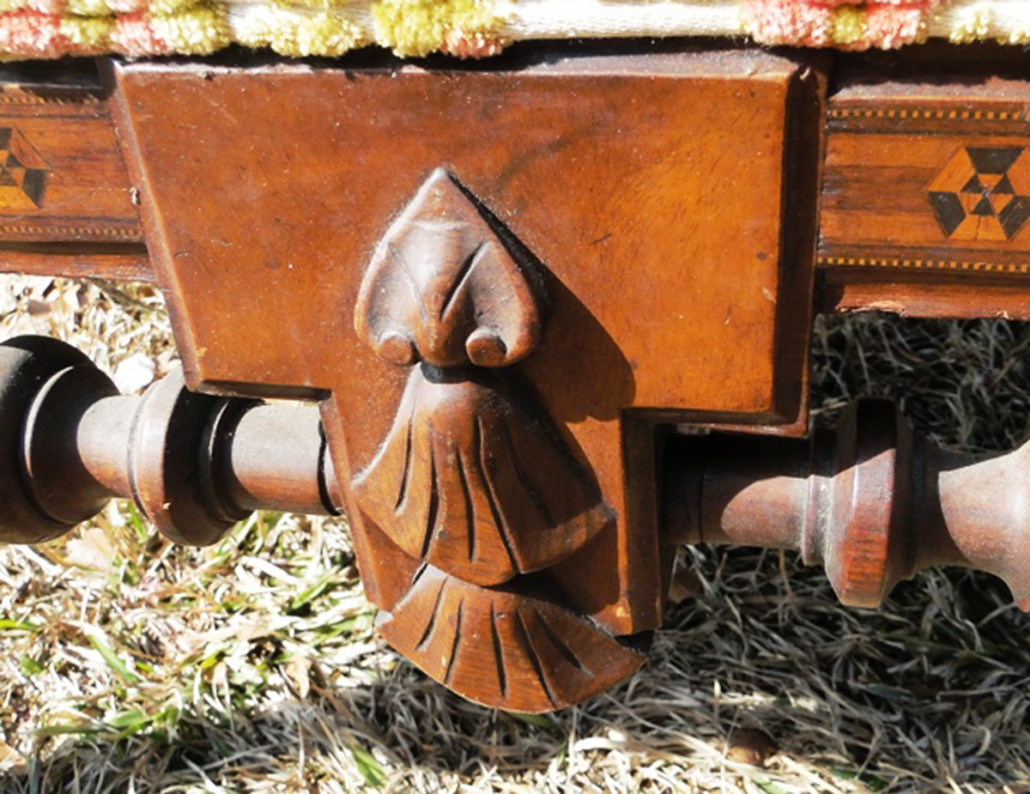 The carved medallion is very Renaissance-like.

And what about this carving on the central medallion? It is very Renaissance-like. 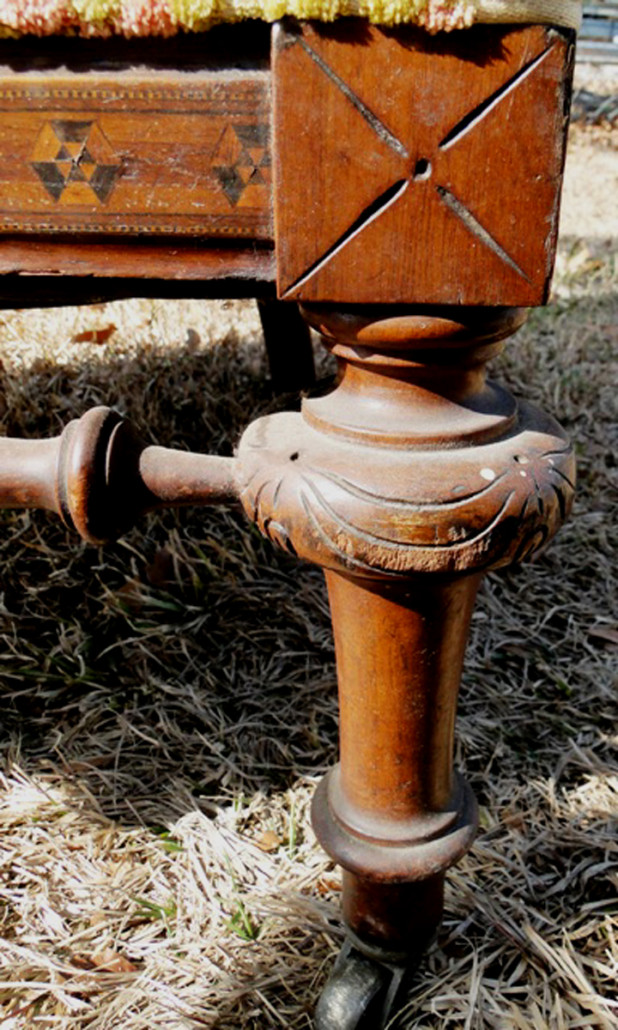 The chair leg transitions from Renaissance Revival to Eastlake.

The chair leg sums it up with Eastlake incising and inlay and Renaissance disk with incising.

Here’s an even more confusing case because it involves the mixture of elements or at least the terminology of three separate styles, not two. 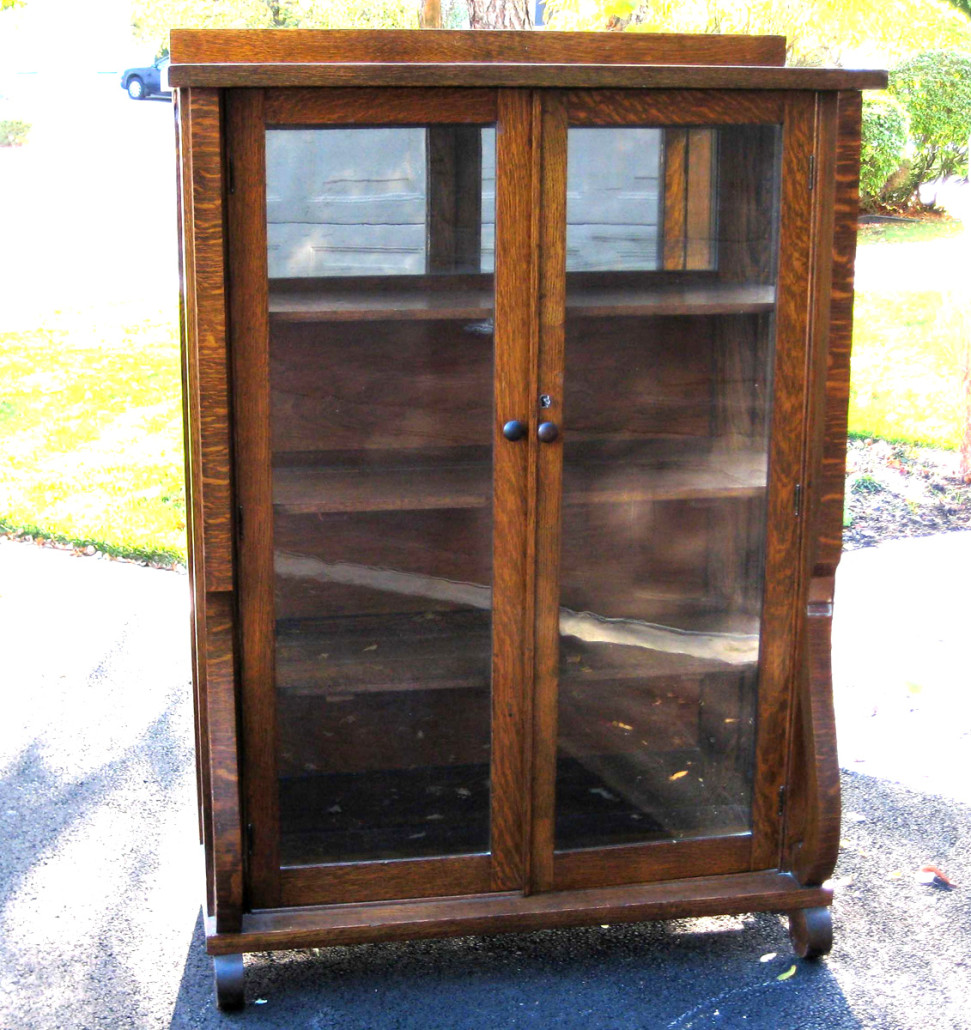 This stylish china cabinet was offered in 1922 by Larkin Soap Co. as a premium for the purchase of $60 worth of Larkin Soap products or for $30 cash, a tidy sum for the period. It was billed as a “Colonial China Cabinet” made of quartersawn oak with a gloss “Golden Oak” finish. The Larkin catalog is filled with “Colonial”-style furniture ranging from library tables to dining room tables to complete bedroom sets.

But doesn’t that style with the sweeping curves and turned under feet look a lot like something we have seen previously? Yes, indeed. We saw that same type geometry around the middle of the 19th century in what is generally regarded as late Empire styling.

The sweeping curves and turned-under feet of the Larkin china cabinet look a lot like the same things on the Empire game table of the 1840s pictured at the top of the column. It looks like the “Colonial” style of the early 20th century is revival of the earlier Empire style.

However, as many times as that style is called Empire, it really isn’t. That style, a carryover of the style of the French Restauration period of the 1820s when the Bourbons, in the form of Charles X, were restored to the throne of France, was famously introduced to America in 1833 in the from of a broadside produced by Joseph Meeks & Sons. It was the first known American print to illustrate a complete set of furniture designs. The style, initially dubbed “pillar and scroll” was given a further boost by an 1840 Baltimore publication titled “The Cabinet Maker’s Assistant” written by John Hall, which contained an additional 198 plates of designs in that style.

Hall believed that the elliptical curve was the most beautiful design in the world and he used it liberally. His designs were aimed at the inexpensive production of massive pieces aided by the newly improved commercial version of the band saw. The base wood was pine or poplar covered in expanses of mahogany veneer.

This was the last gasp of the Classical period of American furniture. The first era of American Classicism was called Neoclassicism, the New Classical, and included the Federal period. The second phase was the French influence seen in the Empire-style work of Duncan Phyfe and Charles-Honoré Lannuier, which took a heavier approach than Sheraton and Hepplewhite and incorporated Roman and Greek architectural and mythological themes like the female figures used as columns called caryatids. The style relied greatly on the carving and design skills of the individual craftsmen who constructed the furniture, and each piece was virtually a unique work. This one-of-a-kind approach to styling and construction was ultimately the downfall of the style and the period.

What followed after Empire, thanks initially to the Meeks family, is considered to be the last phase of the Classical period and is called Late Classicism and is generally dated 1830 to 1850.

That is a long roundabout way from the 1922 Larkin Oak catalog, from “Colonial” to “Empire” to “Late Classicism” but it is typical of the route taken by many styles. Sometimes it just takes some digging to determine the underlying reason and history of a style. The Larkin cabinet had scrolled feet because of a 19th century French royal family.

Send comments, questions and pictures to Fred Taylor at P.O. Box 215, Crystal River, FL 34423 or email them to him at info@furnituredetective.com. Visit Fred’s newly redesigned website at www.furnituredetective.com and check out the new downloadable “Common Sense Antiques” columns in .pdf format.
His book How To Be a Furniture Detective is available for $18.95 plus $3 shipping. Send check or money order for $21.95 to Fred Taylor, P.O. Box 215, Crystal River, FL, 34423.
Fred and Gail Taylor’s DVD, Identification of Older & Antique Furniture ($17 + $3 S&H) is also available at the same address. For more information call 800-387-6377 (9 a.m.-4 p.m. Eastern, M-F only), fax 352-563-2916, or info@furnituredetective.com. All items are also available directly from his website.

Furniture Specific: Gem in the rough