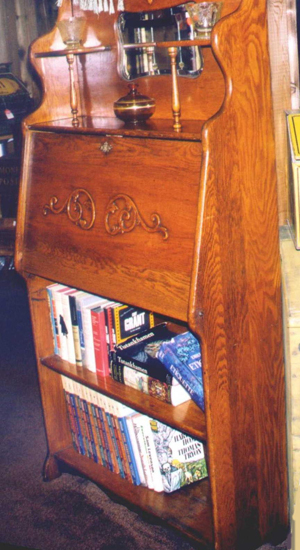 This drop-front oak desk is the famous Chautauqua model from Larkin. It was made around 1903.

When I was in junior high school, the hard-case English teacher who took pleasure in terrorizing all eight graders assigned us the daunting task of writing our autobiography. She provided an outline that dictated the construct of the document and she regularly checked on our individual progress to make sure we weren’t procrastinating on the job.

Early in the outline was the requirement to recite some family history – who we were and where and from whom we came. Easy enough. Just ask Mom and Dad since we had no other nearby relatives and long distance telephone calls were a luxury then. One of my parents had little to say on the subject and that was that. The other one told me the wonderful story of how my surname ancestors had been among the first settlers in Georgia, having been released from debtor’s prison in England to help colonize the New World in the expedition led by James Oglethorpe in the 1730s. Since there had been many generations of illiterate farmers in the family history there was little or no written family history so the story was all I had to go on and it suited me just fine to know that I was not some Johnny come lately just off the boat.

Years later, after a casual meeting with a distant relative who planted some tantalizing seeds of doubt, I became interested in my genealogy and learned how to do some serious research. Boy was I surprised! Turns out my surname was not that of my ancestors. It was an adopted named introduced into the family only a couple of generations earlier. My real ancestors did not help settle Georgia. In fact that side of the family only made it to Georgia in the 20th century. On the other hand they were among the earliest settlers in other parts of the country and the real story of the family history was at least as interesting and informative as the old family tale.

That has turned out to be true many times since then in encounters with readers and customers who have a piece of family furniture that has an interesting family history that proves the worth, sentimental, monetary or both, of the family treasure.

One of my favorites involved a reader who sent me a series of photographs of a cabinet. According to her family history, the cabinet was handmade of solid mahogany that had been imported by the family sea captain who commissioned the construction of the cabinet. The reader drew my special attention to the big gouge on the front of the cabinet. That gouge was the result of a Civil War bullet fired through the house during a nearby battle. Her great grandfather had assured her that the cabinet had been in the family for several generations before that and she wanted to know the value of the cabinet and the premium to the value that could be ascribed to the Civil war bullet hole. Alas it was my duty to inform her that her family history of the cabinet had the same validity as my original Georgia story. Turns out the cabinet was a cabinet made for the storage of phonograph records which pretty much ruled out the Civil War connection right up front. A quick glance at the photos also revealed that the cabinet was not made of solid mahogany and that it was a factory-made piece from the early 20th century with a value commensurate with that provenance. So much for family history. To find a real good family story about the cabinet I suggested she find out who in the family really owned it and what happened to the old phonograph and the lacquer discs.

When my restoration business was in full swing some of my best customers were young professionals who were in the process of setting up a household, not the first newlywed apartment household but the more mature and affluent arrangement that comes after six or eight years of marriage, the first kid or two and the new house. These young people were just discovering some of the “old” stuff their grandparents had stashed around the old family place and wanted me to tell them about the history of some of the pieces.

One nice young couple brought in a nightstand for my opinion. According to the husband’s story this piece had belonged to his great-great aunt who had died in a nursing home in the mid-1930s at the age of 97. Since this was in the late 1980s that meant that this piece had to be at least 100 years old and was probably much older than that. Could I please tell him how much older? No problem. It only took a few minutes rattling around in my library in the shop to produce a book that had a very similar piece. He was thrilled until I showed him the name of the book. It was Robert and Harriet Swedberg’s fine reference work Furniture of the Depression Era published by Collector Books. “How could that be?” he asked. “She was so old when she died.” In this particular case the piece of furniture, if the family story had been correct, would even have fallen within the guidelines often used to determine an approximate age for a family heirloom. The “generation” method will often get you in the ballpark. Just add your age plus 25 years for each generation known to have owned the piece. The customer’s age plus three more generations would have yielded an age of over 100 years. However, a quick lesson on 20th-century construction techniques, including the use of lumber core plywood and aniline dyed gum secondary wood convinced him I was correct. Evidently the aunt had acquired the nightstand just before she went into the nursing home. The real story was where was the rest of her furniture?

A drop-front desk also had a great family story. According to the owner, family legend had it that the desk had come by wagon train from upstate New York, across Pennsylvania and into Ohio right about the time Ohio became a state in 1803. It had, allegedly, survived Indian attacks on the family homestead and had been used to register volunteer troops during the Civil War. The owner asked me for the name of a local appraiser who could establish a value for insurance purposes on this obviously very valuable family artifact. A quick survey of the piece confirmed my initial suspicion. What really clinched the deal was the obscure label pasted on the back of the cabinet. It was torn, dark and dirty and I could see how it could have been overlooked a couple of times, especially if you weren’t looking for it. After all everyone in the family already knew what the desk was and where it came from. However, the label held a real surprise for the owner when I pointed out that it said “Larkin” on it. 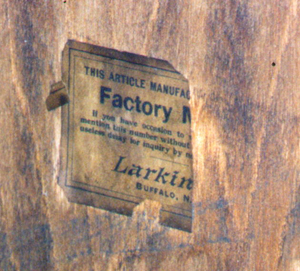 The Larkin label, after a careful cleaning, ruled out the family oral tradition about the desk being hauled to Ohio in the early 1800s.

A quick review of the history of the Larkin Soap Co. convinced the owner that he had a 20th-century oak desk. In reality the desk actually had come from New York just as the family story said, but it came from Buffalo, not from upstate. And it probably came to Ohio by railroad train instead of wagon train around 1903, not 1803. The great story would be to find out who bought the desk from Larkin and were they a Larkin dealer or just a good customer? That would be good family history, not undocumented fairy tales about wagon trains and Indian attacks.

It’s never fun to dispute someone’s cherished family oral tradition and history but just as there are acceptable methods in genealogical research there are well-defined ways to determine the general age and origin of most American furniture. And like genealogy, part of the solution to the problem is in documentation. Unlike genealogy, adequate knowledge of furniture history, construction and style can often help confirm or deny family tradition about furniture. That won’t work with genealogy, unfortunately.