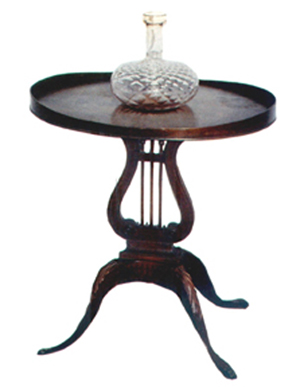 The classic Mersman ‘surfboard’ table of the 1920s with a Federa- style lyre base. Swedberg photo.

Since we’re not in the 20th century anymore (hurray!) I can now safely discuss some of my least favorite furniture makers from the period. Don’t get me wrong. There was some great furniture made in the dark ages to go along with all the nondescript junk and scams of the period, and some of the brand names I plan to mention happen to be among the makers of some of the great stuff. It’s just that after almost a hundred years some of this furniture, if not the brand itself, seems, no other word for it, trite.

Trite is a pretty harsh word to use to describe some of the pioneers of the machine age of furniture manufacturing but after 30 million (30,000,000!) examples of the product what other word could you use to describe a Mersman table? Seen it.

J.B. Mersman was a 19th-century sawyer with mills in Angola and Kendallville in northeastern Indiana. He relocated his operations across the state line to Ottoville, Ohio, where he started making tables around 1876 under the name Mersman Tables when the lumber business turned soft. From his first table he went on to make beds and bed parts. So successful was he that the nearby city of Celina, Ohio, solicited him to build a factory there and provided $7,500 of seed money for the operation. That turned out to be a good investment by the city fathers. He was up and running in Celina by 1900 making beds, library tables and dining tables.

But J.B. longed for the sights and sounds and smells of the sawmill business and turned the company over to his sons Edward and Walter along with a local banker (maybe he had some stimulus money to spend). After several corporate variations in ownership and name the company emerged as Mersman Brothers Corp. in 1927, dedicated to making a wide assortment of residential furniture with a major in occasional tables. In the 1920s the company bragged that one out of ten tables in American homes was a Mersman. It may have been more. The company entry in “American Manufactured Furniture” by Don Fredgant, Schiffer Publishing, a compilation of manufacturer’s promotional material to retailers for the model year 1929, illustrates 19 tables in five pages. During World War II the company made mess tables and benches for the Navy and developed an even better feel for tables. After the war they concentrated on living room tables.

Perhaps one of the company’s main contributions to the industry during the Depression was its marketing program. It worked with retail merchants to develop a marketing and advertising plan for specific markets. It provided, free of charge, camera-ready art for newspaper advertisements. It also developed what it called “The Mersman Idea Book,” a loose-leaf compendium of marketing ideas and strategies as well as helpful hints on accounting practices and inventory control. The book was updated with regular additions and was free of charge to any retail furniture establishment who sold Mersman products. It included not only ideas from the company but also examples of what techniques had worked for other merchants in different areas of the country.

Another name that produced a prodigious quantity of product in a wide range of quality was the Maddox Table Co. William Maddox was also a great innovator. After founding the Maddox Table Co. in Jamestown, N.Y., in 1898 he invented a machine to polish table tops. He was also one of the first makers to trademark his products and he instituted and sustained a multi-national marketing effort before selling his company in 1919. The new company, known as Shearman-Maddox, operated under the Maddox trade name.

The company embarked on a remarkable journey of making Colonial Revival-style reproductions, including bedroom suites and breakfronts but quickly focusing on drop-front desks and bookcase/secretaries. Working under the trade name Maddox Colonial Reproductions, the company turned out an extraordinary number of secretaries in a variety of styles and sizes. The primary piece of work was the Chippendale cabinet with broken pediment and finial, claw feet and serpentine drawer fronts and occasionally a Chippendale model with a block front, usually in a combination of mahogany veneer and various solid woods. But the company also made Georgian bracket base models, Queen Anne versions including a stylish desk on frame, a nice Hepplewhite-style tambour desk and even some chinoiserie models for the Eastern taste.

Maddox was a truly egalitarian manufacturer making a product for all price brackets. Quality ranged from cabinets made entirely of a secondary wood, usually red gum, with flat drawer fronts and little decoration to models with gum cabinets and doors and mahogany veneer on the drop front and drawers to solid mahogany versions with all the bells and whistles of the genre including prospect door, document drawers and elaborate cubbyholes with fancy cut plywood muntins over the glass doors.

Although they never made the claim as Mersman did about how many desks they, made it is a pretty good bet that there are more Maddox bookcase secretaries and drop-front desks out there than any other single brand. You probably know someone who has one.

The company’s initial products were occasional tables and chairs primarily in Colonial Revival styles. Around 1900 J.G. left Grand Rapids to open the L. & J.G. Stickley Furniture Co. in New York, leaving Albert as the sole brother in charge of Stickley Brothers. And things began to change.

Albert began to dabble in early Mission designs and by 1902 had the “Bewdley” line, designed by D. Robertson Smith, in the marketplace. The Bewdley line drew inspiration from English and Scottish Arts & Crafts designs and was more elaborate and decorative than the early American Mission style. Then came the breakthrough.

By 1914 it was time for a change but the name “Quaint” had been very good to the company so there was no reason to get rid of it. Just tack it on something else. That something else was the “Quaint Manor” line featuring Austrian Modern design elements. By the early 1920s the next something else was – surprise – “Quaint American,” featuring natural finish and polychrome painted Windsor and ladder-back chairs and a variety of case goods that combined elements of American Colonial styles.

Stickley Brothers used the name “Quaint” in its trade names and labels for the first four decades of the 20 century. The labels had such variations as “Quaint Furniture,” “Quaint American Furniture” and “Quaint Furniture of Character,” while the trade names had even more combinations.

By the time the company went out of business in the 1950s, the name “Quaint” had become just “Trite.”

Send your comments, questions and pictures to Fred Taylor at P.O. Box 215, Crystal River, FL 34423 or email them to him at info@furnituredetective.com. 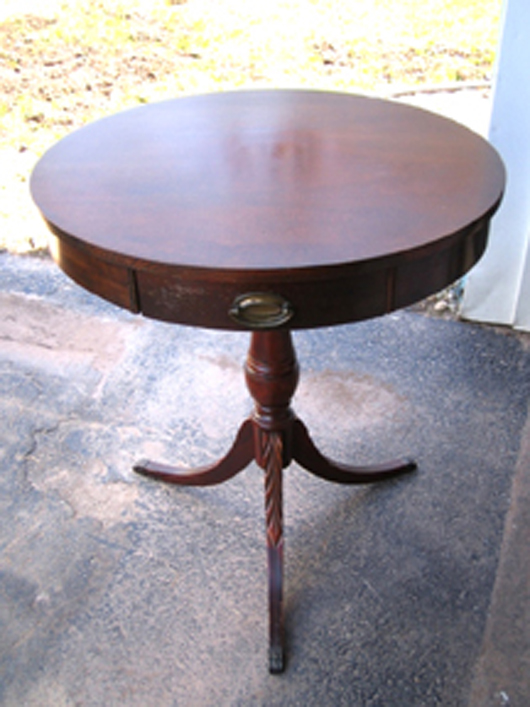 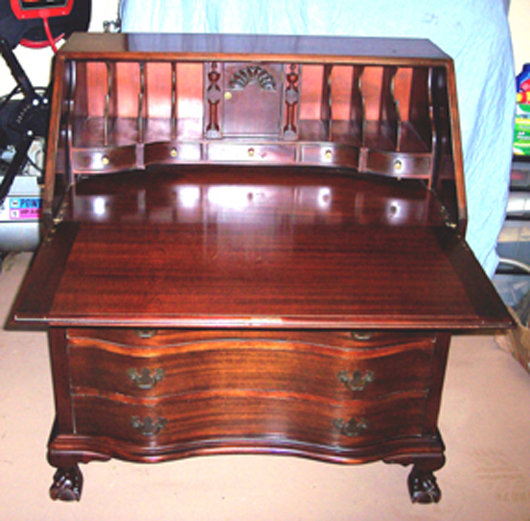 This is a nice ‘middle of the road’ quality drop-front desk by Maddox with a mixture of ribbon striped mahogany veneer and secondary wood solids. Fred Taylor photo. 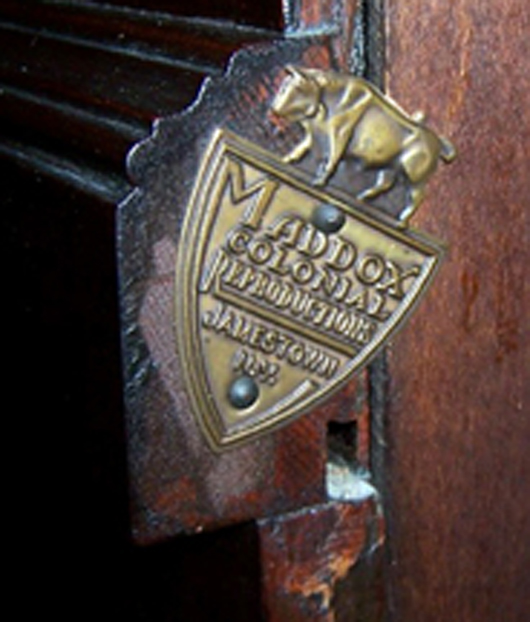 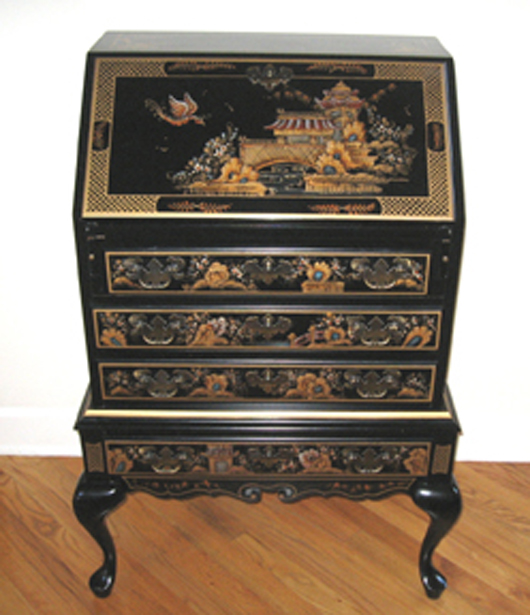 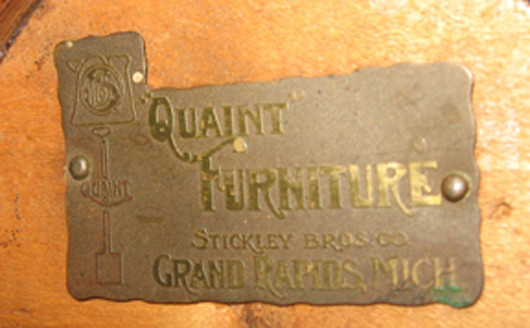 This is the original Quaint label from 1902 that launched the Stickley Brothers ‘Quaint’ empire. Fred Taylor photo. 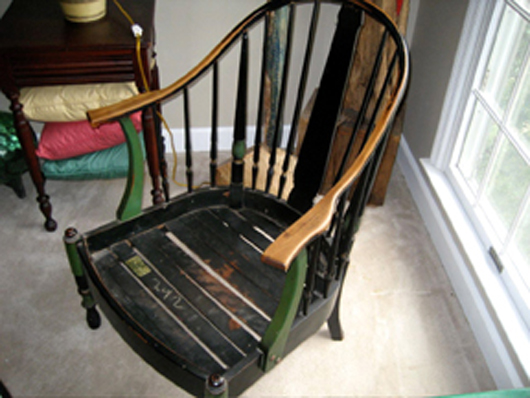