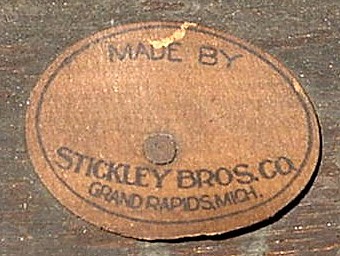 CRYSTAL RIVER, Fla. – For the last several months I have been talking about ways to evaluate the clues available to us in determining the age of an older or antique piece of furniture. But now it’s time to take a short break from all that technical stuff and discuss another way to tell how old that treasure is – old fashioned by – by word of mouth or hopefully by pen and ink. What I’m referring to of course is called the provenance of a piece – the history of where it’s been and who it belonged to.

You will often hear appraisers, learned and otherwise, talk about the “wonderful provenance” of a piece or perhaps indicate the increase in market value based on “such a magnificent provenance.” So who gives out provenances and how do we get one and are some better than others?

The easiest, most convenient nontechnical way to establish a provenance is to ask the owner, seller, dealer or family member in current possession of the piece. It is also absolutely the least reliable way of getting anything even close to the real story. Family history has a way of fudging around the edges and glossing over the dings that accumulate in every family tree and what is true of genealogy research is also true of provenance. Except that the generally accepted standard for what is reliable information in the genealogy field has been set by the Daughters of the American Revolution, who impose strict standards of proof requiring written confirmation of asserted facts by disinterested third parties such as governmental, religious, fraternal or other dependable sources. It’s unfortunate this level of standards has not been applied to antique furniture, and almost any old legend or tale will do until someone is willing to change the story based on actual evidence.

A common example of the family fable that becomes family history is often found attached to the newly inherited family piece now owned by the oldest great grandchild. Legend has it that the old night stand has to be over 100 years old, maybe even closer to two, because it belonged to Aunt Mabel, and Aunt Mabel died way back in ’34 when she was almost 103. Obviously the piece has to be really old. Except that in reality Mabel bought the table new from a mail-order catalog when she moved to the other nursing home back in ’28. So maybe it’s not quite as old as the family would like to have it be.

Another quick reality check is to look at the society and furniture of the period from which the family piece supposedly originated. In my great grandmother’s case, a visit to a museum or library would tell me what the furnishings of the late 19th century would be like and what the expectations of the time were. Given those facts it would seem unlikely that my great grandmother, as a newlywed in a Southern state, would have owned a Depression-era china cabinet. It is possible she had one later in life but that wouldn’t make it 100-plus years old. So much for family legends.

What makes for a good provenance is, in the immortal words of Sgt. Joe Friday, “just the facts.” The ideal provenance would consist of an unbroken chain of evidence in hard copy from each succeeding period of ownership. It would start with an original maker’s bill of sale, with his or her name on it, made out to the original owner, with his or her name on it, with a description of the piece, what the original price was and the date and place of the transaction. This original piece of evidence would be supported in later years by documents from the probating of the will of the original owner listing the assets, including the piece of furniture, and the disposition of the assets – who ended up with the piece. If the piece were sold or donated there would be evidence of the transaction in the form of a receipt or an entry into an inventory log. Evidence like this can also sometimes be found in bills of lading when a family moves and household inventory is shipped somewhere. Insurance policies often list important household articles and contemporary social events news accounts will sometimes mention the “antique sofa in Mrs. J’s parlor.”

But such excellent evidence is rarely available to us in the real world. We have to make do with common sense, good detective work and some room for exploration. Many a piece that first appears to be anonymous can actually contain clues to its origin. For example, overlooked shipping tags, stapled or tacked to a rear surface, can locate the piece in a given time and place. Information about the shipper or recipient is often available through library or Internet searches. Arcane company logos and maker’s marks are listed in a variety of publications and there are furniture people out there doing research on the subject every day. Signatures and bequests are sometimes found scrawled on the under side or the back of a drawer and don’t forget to look inside the case with a flashlight.

A believable, documented provenance is a wonderful thing to have and it often enhances both the value and the interest of a piece. But don’t pay a premium for someone’s undocumented family history, no matter how alluring it may be because without the proof its just hearsay. But the lack of a provenance should not detract from a well-made, attractive piece of older furniture. Look as it as an opportunity to do the research and create the provenance.

Send comments, questions and pictures to Fred Taylor at P.O. Box 215, Crystal River, FL 34423 or email them to him at info@furnituredetective.com. Visit Fred’s newly redesigned website at www.furnituredetective.com and check out the new downloadable “Common Sense Antiques” columns in .pdf format. 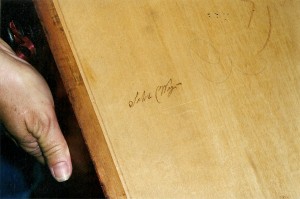 Is this the signature on the bottom of this handmade drawer that of the maker, the owner or a kid scribbling? 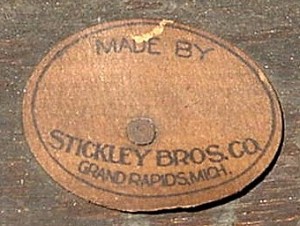 A little research will show that this type label was used by Stickley Brothers before their ‘Quaint’ line of Arts & Crafts/Mission furniture appeared in 1902. 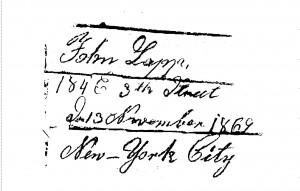 I found this piece of paper folded up in a drawer slide cavity in an old chest. I was able to trace the signature in the U.S. Census to a 29-year-old cabinetmaker in New York in 1860. The style fit the period and the paper was in a place that could only have been accessed by the maker so I can reasonably assume this is the signature of the originator of the cabinet. 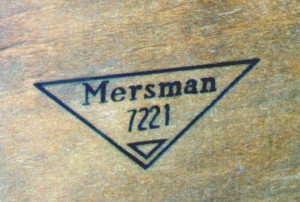 No doubt about who made the table with this mark.