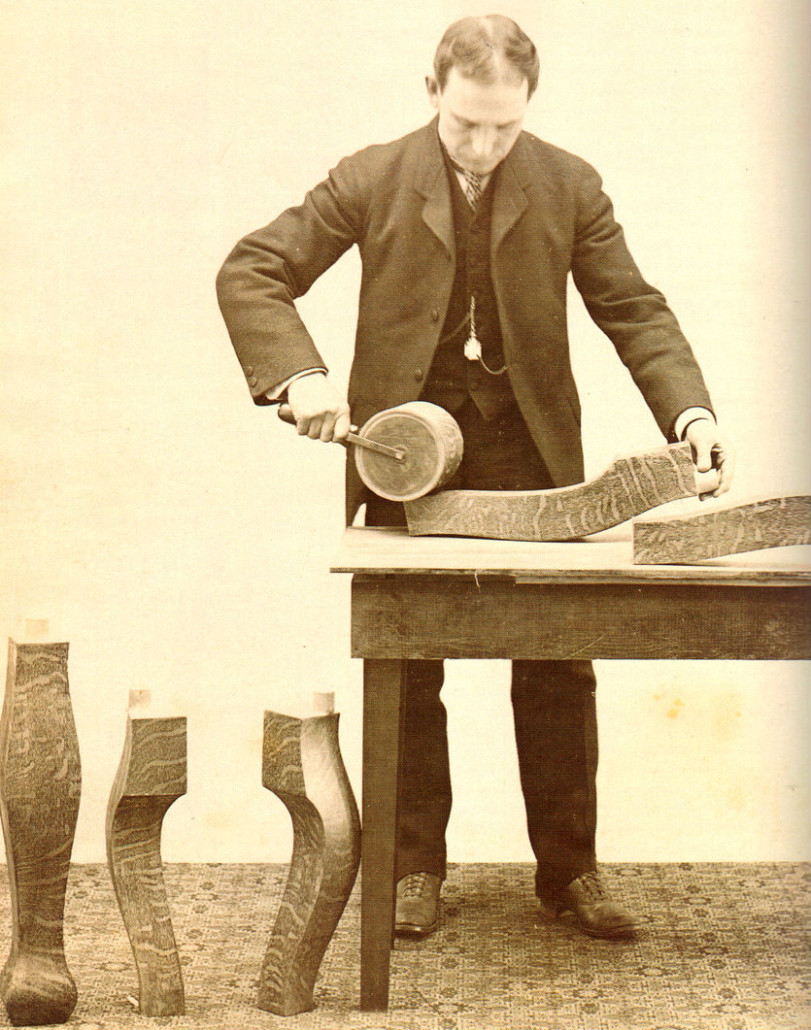 CRYSTAL RIVER, Fla. – The American style. Is there such a thing? Is there a style that is both typically American and that can be found primarily only in this country? Of course there are a number of candidates and many of them would nicely fill the requirements of the “American style” at first glance but take a closer look.

After getting off to a slow start, the early Colonists were more concerned with food and shelter than furniture, the furniture business picked up nicely and soon a great number of turners, cabinetmakers and woodworkers were making household products for the new settlements. But with the exception of local variations and concessions to reality and necessity, most of the “formal” furniture was a reproduction or interpretation of Old World styles and tastes. Those styles included Jacobean and William and Mary among others. Even after the Revolution our great new national style, “Federal,” was greatly influenced by English designers like George Hepplewhite and Thomas Sheraton with the Adam brothers thrown in for good measure.

American Neoclassical was a rehash of Greek architectural themes that morphed into Empire and then Late Classicism. After that came the great succession of revivals that dominated most of the 19th century, and some of that work, especially during the Renaissance Revival period, could be called uniquely American, but it was more the method of the work that was uniquely American, not the style or the form.

The country would have to wait until almost the end of the century to find itself a totally homegrown style that most of the populace could consider both affordable and comfortable. That style was the progeny of the great marketing strategy called the “catalog sales” and the style was Golden Oak.

Oak was old news to American cabinetmakers and furniture craftsmen. It was the primary wood of early Colonial furniture construction because of its ready availability and the general ease of its working qualities. But along the way oak faded from view as mahogany and walnut dominated furniture tastes from the mid-18th century to very nearly the end of the 19th century. Oak was still used extensively in rural settings but formal furniture was almost all made of “formal” woods.

But during the third quarter of the century, especially toward the end of the quarter, several things happened simultaneously or consecutively to change the direction of American furniture styles. The first was the arrival of the up-and-coming middle class, buoyed by the increasing prosperity following the Civil War. The second was the increasing scarcity of walnut after nearly 75 years of unquenchable Victorian appetite for the wood. Concurrently the expanding American furniture factory system was hitting its next great stride and was capable of mass-producing about as much product as its marketing people could sell. Then came the catalog sales idea to take advantage of this great unused capacity.

The process of quartersawing a log to produce the ‘tiger’s eye’ effect was an inefficient use of the wood.

Fine oak furniture was being made before the huge factory and catalog sequence, but it was being made one at a time by great craftsmen like Robert J. Horner in New York or designed and built in the factories of the chair genius George Hunzinger. The primary wood used by these artists was white oak, and the natural beauty of the wood was enhanced by two methods. White oak is a pale wood with little natural color. Both color and texture were improved by the process of “quarter cutting” an oak log to reveal the startling pattern of the flecks of the medullary rays, the “tiger’s eyes” in the oak. The other improvement came with the application of coats of orange shellac sometimes tinted with yellow ochre to produce the famous golden oak look of the late 19th century. This led to the “Golden Oak” period of American furniture that lasted from the 1880s to the second decade of the 20th century.

That was all well and good for the upper class who could hire Horner or buy Hunzinger work, but the majority of the emerging wealthy middle class wanted new furniture now. And they weren’t willing to wait on Robert Horner to make it for them. They needed it immediately to furnish their new large houses and cement their place in the next tier of society.

That opened the door for Sears, Eaton’s of Canada, Montgomery Ward and John D. Larkin to fill the void with their catalog offerings and in effect distribute the new American style across America, not just on the East Coast or in the Midwest. But inevitably there had to be compromises. To distribute a catalog all over the country with furniture for sale, there had to be some standardization and uniformity in the specifications for products that came from a number of different suppliers who provided the catalog houses with inventory. Designs had to be simplified so that shipping did not require the involvement of the middle man, the agent, who would receive, assemble and deliver the furniture to the consumer from the rail yard and warehouse. The furniture had to be designed to be shipped intact with no assembly required or shipped in a “knock down” state so that it was easily assembled by almost anyone, including the customer. 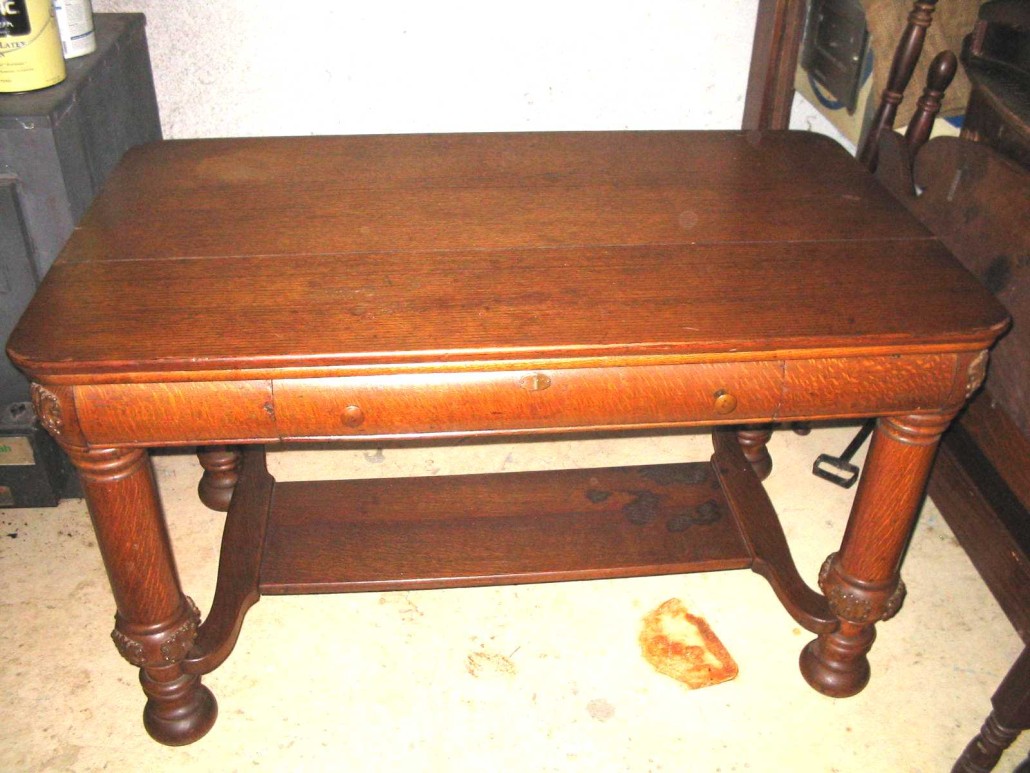 This library table demonstrates some of the conservation methods used late in the Golden Oak period. The drawer front, skirt and legs are veneered in quartersawn oak instead of being made of solid quartersawn oak. The top is solid flat cut oak boards and the emblems are applied, machine made appliques rather than hand-carved.

This uniformity and standardization called for the second phase of the new era. No longer could each piece be hand-carved by masters like Horner or include the complexity of Hunzinger’s rocker and folding mechanisms. Late in the century hand-carving was replaced by machine-made applied molding and decorations that overwhelmed the customer with volume and seeming intricacy. Sharp metal dyes were used to press designs into the crest rails of chairs producing a new genre of chairs that appeared to be hand-carved but were mass-produced by factories like Phoenix Chair Co. in Sheboygan, Wis., and many of the Grand Rapids, Mich., makers.

The size of the furniture also began to decrease. It was cheaper to ship smaller items and they were cheaper to make. After the turn of the century, the supply of old growth oak timber began to be an issue, even drawing the attention of Teddy Roosevelt, who urged conservation.

In response the factories took several new steps to conserve the oak. First, quarter-cutting an oak log to produce the tiger’s eye pattern is wasteful because so much wood is discarded. Factories began to make extensive use of quarter-cut veneer that would cover many more square feet of product from the same log than solid material would. In addition manufacturers began to use flat cut oak in panels and frames instead of demanding all quarter cuts. For the most part the new breed of customer never noticed the difference. Another conservation step was the use of woods other than oak, woods that looked like white oak to the untrained eye but were more easily available and less expensive such as red oak, elm, hickory and ash.

The final step was the use of faux oak finishes that involved rolling an oak grain pattern over a close grain softwood base to give the impression of tiger’s eye oak. 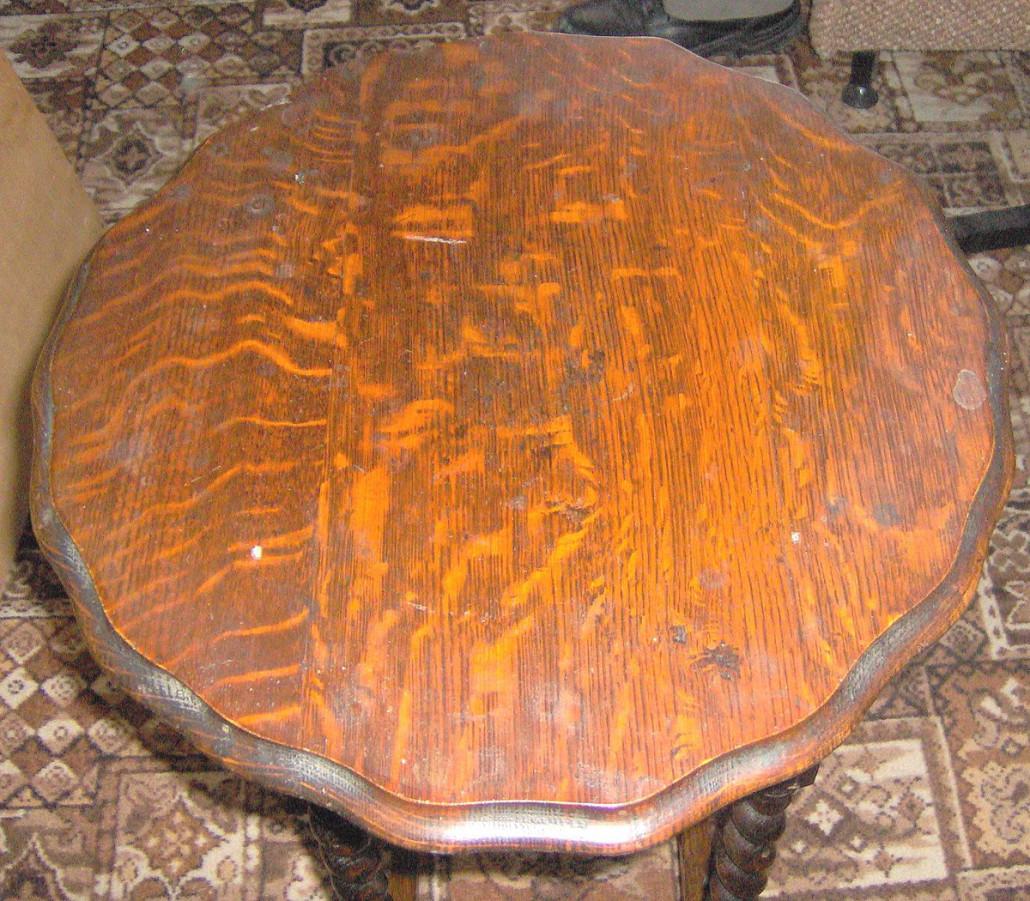 This turn of the 20th century oak set is typical of mail-order furniture of the period. The table has a quartersawn oak veneer top, veneered skirt, veneered pedestal over solid oak, veneered base, turned under Colonial-style feet borrowed from the Late Classicism style of the 1840s and pressed-back flat-cut solid oak chairs.

The Golden Oak phase was briefly interrupted by the more severe and darker Arts & Crafts movement with its fumed finishes and dark nut-brown stains, but lasted only briefly and by the time of World War I was essentially gone.

Golden Oak returned for a brief encore after the war, but it soon gave way to the overwhelming demand for Colonial Revival reproductions that introduced another major period in American furniture design and redesign.

Even though the Golden Oak period lasted less than 40 years, it was a major milestone and marked a turning point in American furniture design, marketing and distribution, providing a uniform quality of furniture across the country that was both affordable and livable. Good Golden Oak items continue to sell well in today’s market and have now served four generations of American families.
__