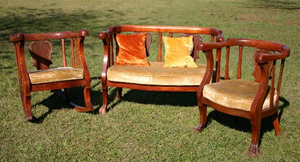 This Empire Revival parlor set, circa 1895-1900, is made of solid birch with a “simulated mahogany” finish to match the mahogany veneer in the splats. Image courtesy of LiveAuctioneers Archive and Turkey Creek Auctions.

Deception in one form or another has almost always been a part of the furniture manufacturing process. In fact efforts at deception have yielded some of the most revered pieces in furniture history. Even the use of veneer is, after all, an attempt to make something look like something it is not. That type work was pioneered in ancient Egypt to put a nicer looking face on furniture being made for a king. Eventually the use of veneer became an art in its own right introducing a new medium for decorative effects that reached well beyond the simple overcoating of a less desirable surface.

Even restoration involves a little bit of deception in most cases. Any good restorer knows how to blend in a break to be unnoticeable or how to fade a finish repair into the old finish to look seamless. Color matching and blending is major part of the restorer’s work.

Is there a point at which a part of the deception of restoration or manufacturing becomes more than that?

Let’s examine a few cases of deception and/or restoration to see how severe the actual deception was and if it was done with the intent to defraud.

How much can be added or subtracted during restoration to alter a piece so much that it is no longer considered original? One rule of thumb I have heard, primarily by English dealers, is that no more than 20 percent of piece can be altered to be considered original.

Like most “rules of thumb” that leaves quite a bit of space for speculation. Consider the case of the broken set of chairs. There once were six chairs in the set. One chair was lost, discarded or otherwise disposed of somewhere down the line and a set of five chairs is rather awkward. A good furniture professional can easily take an original part here and there from each of the five chairs and then make enough new pieces to assemble a complete sixth chair. It will have 80 percent original pieces from the set. And what about the remaining chairs? Each chair can have enough new pieces made for it to be a complete chair yet still be 80 percent original. So instead of five 100 percent original chairs we now have six 80 percent chairs. Would the set be considered original under the 80 percent rule? The set has been restored to its original condition of six chairs. Would that be considered a deception or is it a deception only if it is not revealed and a buyer is not astute enough to notice?

In another case a customer requested I make a missing piece for a family heirloom. The heirloom was a mid-19th century Late Classicism armoire with removable crown and knockdown construction. Apparently while in the possession of another relative the crown had been removed to accommodate a low ceiling. When the relative moved the crown was left behind. Fortunately my customer had a photo of the complete cabinet I could use as a model for the replacement crown. I constructed the crown of poplar and easily duplicated the cyma curve of the molding. What I couldn’t find was the right piece of crotch cut mahogany veneer to use on the crown. The newer flitches just didn’t look the same as the old veneer. So I grain painted it to match. Crotch mahogany is rather easy to grain paint and the finished product, when placed atop the cabinet, was indistinguishable from the photo. Was the armoire now considered to be a less important heirloom because such an important part was newly made? Not to the customer. No harm no foul.

One form of deception is the use of an inferior wood that has been stained or colored to look like a more expensive wood. In some cases wood substitution was merely a case by case event by individual cabinetmakers to make up for a shortage of or lack of access to better quality material. But late in the 19th century this seemingly innocent deception became institutionalized with the advent of aniline dyes.

In 1856 an English chemist named William H. Perkin accidentally produced aniline dye while trying to make quinine from coal tar. The aniline dye turned out to be a great coloring agent for the vibrant hues desired in late Victorian period fabrics. And there the matter rested until late in the century when someone realized that the aniline dye could be used to change the color of wood so hard it would not accept a traditional oil based wiping stain. The introduction of aniline dye to the commercial furniture market meant that expensive, imported mahogany did not have to be used in all applications because the penetrating dye could be used to color less expensive domestic hardwoods such as birch and maple. The highly penetrating, usually water-based aniline dyes solved that problem nicely. In fact, if you have tried to strip and refinish a piece from this period with the water based dye, you know that it strips to “hot pink” and in order to get an even color, your choice is “what color dark red mahogany do you like?”

The use of birch as a mahogany substitute became so prevalent around the turn of the 20th century that Sears decided to turn the deception into a positive marketing tool. Sears, Roebuck & Co. took great pains to promote its use of “non-mahogany” in its 1902 catalog. In describing a five-piece parlor set, its “$17.90 SWELL SUITE,” the text points out, “The frames are substantially made of the best selected birch with a fine mahogany finish. … It gives the same general effect as genuine mahogany and is very much less expensive … and you have the same strength as you would have in genuine mahogany furniture.” Elsewhere the catalog describes the finish as “simulated mahogany” or “imitation mahogany.” Thus the cat was out of the bag in a big way. By the early 1930s a secondary wood, red gum, was the most frequently used material in furniture construction and it was not always used as drawer sides. It became the primary “face” wood for an entire generation of households thanks to the creative use of aniline dyes.

An entire generation grew up thinking their family mahogany or walnut dining room set was actually made of mahogany or walnut. Were they deceived? You bet. Was it illegal? Not if the advertisements were carefully worded to say “mahogany veneer and selected hardwoods” or something similar. Did anyone know what “selected hardwoods” meant? Probably not, which was the purpose of the statement. No harm, no foul. And did it make any difference? Not until two or three generations later when the heirs decide to sell the family heirloom set only to learn it is made of secondary woods and worth less than half what they thought. Is that still no harm, no foul?

Another type of deception in the Depression era also deserves mention. It was the production of so-called “borax” furniture. Borax furniture was cheaply made of inferior wood and the wood grain was printed directly onto the surface. It was given as a premium for buying borax-based laundry products. This was actually just an extension of the process of faking quartersawn oak developed in 1885 by Harry Sherwood in Grand Rapids. Sherwood used a textured roller to apply a “simulated oak” finish to a smooth cheap secondary wood. All of this laid the groundwork for the widespread furniture hoax in American history with the introduction of the “engraved” finish.

Turns out the engraved finish of the 1980s was a refinement of the borax process. The grain pattern of mahogany or walnut was printed directly onto a secondary background or even directly onto the second greatest hoax in American furniture history, medium density fiberboard, known in the trade as MDF.

Then there are the cases where the original intent was to totally deceive about the age or origin of a piece of furniture. A well-known case of making for total deception is discussed by Myrna Kaye in her book “Fake, Fraud or Genuine?” published by Little, Brown & Co, 1990. That was the case of a frustrated woodworker who set out to make a museum appear foolish. It worked. He made a convincing 17th century Pilgrim’s chair in the 1920s, so convincing that the museum refused to accept it as newly constructed even after he documented his work. In that case the deception was created with a personal agenda in mind.

A case where outright fraudulent deception was done simply for the money was an example pointed out by dealer and author David Lindquist in the late 1990s. He revealed that an antique Queen Anne cabinet was in fact a moderately good imitation from England. Represented as the real thing the cabinet had sold at auction for $26,000. Had the piece been presented as a newly built reproduction it would have sold in the $8,000 range. The $18,000 difference was the “restorer’s” premium. But $18,000 really is not a lot of money for such painstakingly detailed work.

These two cases pale by comparison to the English “antique factory,” which was recently revealed to have for nearly two decades produced outright fakes that were represented as genuine antiques for sale by a pair of un scrupulous dealers. With asking prices in some cases in the $750,000 range for a newly created “antique,” that is well beyond the purview of “no harm, no foul.” 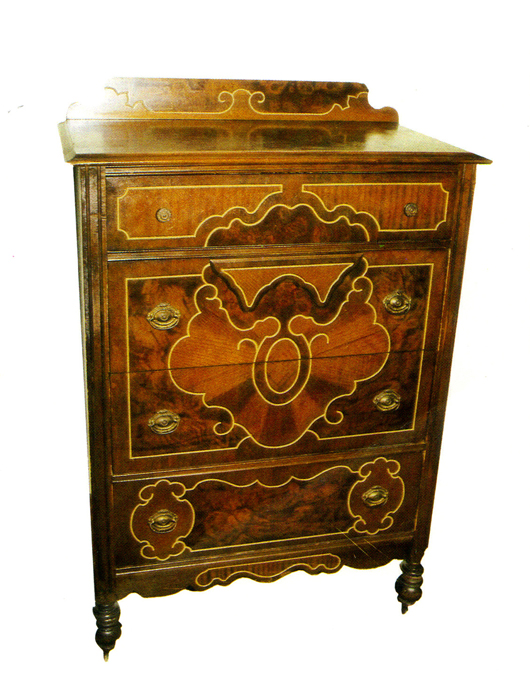 This chest of drawers is made of an inferior secondary wood that has the designs printed on it. It is called borax furniture. Swedberg photo. 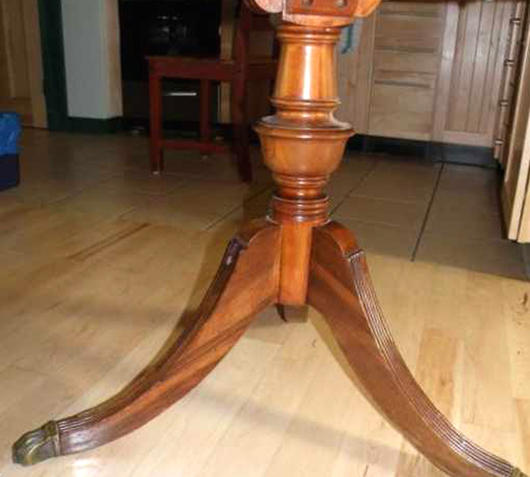 The color variations in this “walnut” table pedestal indicate that it is actually made of red gum that was originally stained to look like walnut. Fred Taylor photo. 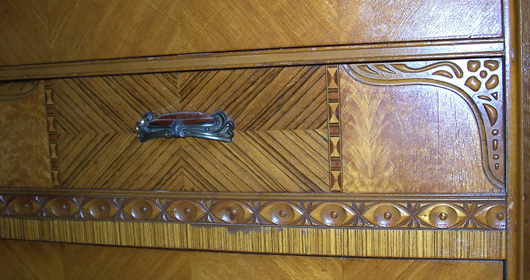 None of the striped veneer in this photo is actually wood. It is printed on paper that is glued to the surface. It is called “veneerite” and was used to decorate Art Moderne pieces of the 1930s. Fred Taylor photo.