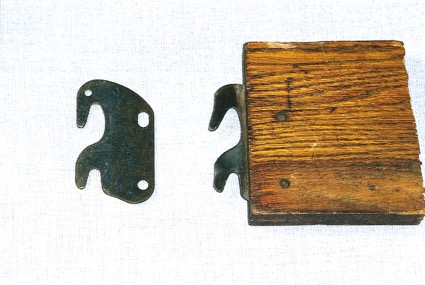 This turn of the 20th century bed hardware consists of a stamped steel hook imbedded in the side rail and held in place by two steel dowels. The hooks enter a slot in the post and engage two more steel dowels implanted in the post.

CRYSTAL RIVER, Fla. – I was in college when the rack monster got a firm grip on me. In high school, while living at home, I had led a fairly sedate existence, keeping regular hours and getting lots of sleep. Between school, work and a steady girlfriend my life was, well, ordinary. But when the time for college rolled around it was party time. Any time. All the time. Not all the time, of course, because I did actually have to study a little but sleep – “rack time” as we called it – came after whatever was last on the priority list.

Then the rack monster showed up and demanded at least a down payment on the accumulated sleep deficit. That’s when I began to appreciate, for the first time in my life, a comfortable place to sleep – a good bed. At that time in my life a good bed was a rare commodity, having inhabited dorm rooms, fraternity houses and low-rent apartments for a long time so I became aware of the qualities that make up a good bed. At first I didn’t pay much attention to the frame or all that support stuff because the mattress was the thing – the only thing – that produced a good might’s sleep, in my young but not so humble opinion.

Then the love of my life and I bought our first house and we moved into it without owning a stick of furniture. The first acquisition was a set of name brand bedding from the big department store – box spring and mattress happily placed in the right place – on the floor in the bedroom. And there it stayed for a couple of years until we decided to civilize a little bit and buy some real bedroom furniture. At least that was our intention but, as it turned out, real furniture from the big store was expensive so we went junking. We ended up buying a 1940s mahogany bedroom set, headboard, footboard, side rails, slats, tall dresser, nightstand and vanity with a mirror and stool, all for $90.

Then came my introduction to bed technology. To that point I never thought about a bed having any technology so I had to learn fast. The problem was that the modern set of bedding we had bought two years earlier did not fit in the old bedstead. It was too long – or the bed was too short. I didn’t know there were different sizes of beds – lengthwise at least. I knew about widths having slept too many nights two to a single bed, but that’s another story. In any event I could not afford to replace either the furniture or the bedding so I had to figure out how to make it all work. I knew a little about woodworking since my father had once been a shop teacher so I decided to make new side rails that would make the bedding fit the bed.

But first I had to understand the technology of the bed. There were these two finger-like protrusions on the ends of the rails that seemed to attach to something in the posts on the headboard. I ended up destroying the original side rails to figure out the program but I did figure it out and we used that modified bed another dozen years. It brought to my attention the benefits of a stable wooden frame for the bed that could, in the case of a major event such as painting the bedroom, be disassembled in short order, moved out of the way and reassembled to the original configuration.

That concept of portability in such a major fixture as a bed frame was a brilliant idea. I wondered where that idea had come from. Turns out it was a fairly recent idea, relatively speaking, and was technology driven.

Through most of human history a place to sleep was just a relatively flat spot in some secure location. It may have been lined with leaves, moss or skins, but it was nothing permanent. The main problem with that concept was that other creatures besides people found the warm soft environment inviting and our ancestors often shared the nest with uninvited guests. The Egyptians partially solved the problem by constructing platforms above floor level on which to place skins and fabric. At one point they even developed a suspension system for a bed using lacing of hide or rope. But that concept died out with the civilization and the Romans and Greeks didn’t follow up.

In the Middle Ages in Europe the nobility could build a sturdy platform in the corner of a room, surround it by curtains, pad it with fabric and have a nice bed. Mobility was not a concern because they weren’t going anywhere. But the peasantry had a different approach. They made mattresses stuffed with moss, hair and feathers that could be placed on the floor in a corner or near a fire. The sack mattress could easily be emptied of its contents and packed away when the next war of famine rolled in and the peasants had to hit the road. Eventually a shallow wooden frame was developed that would help the mattress keep some semblance of its original shape. But there was still the critter problem.

By the 14th century the Chinese had free-standing beds that were not part of the woodwork and Europe was slowly catching up. But even by Elizabethan times the suspension idea had not yet taken root and beds were enormously expensive and oversize until a general downsizing trend started in the late 17th century. It took the colonization of America to stimulate the next major step in bed technology.

Of course early Colonial beds were not much different from contemporary European beds, but change was coming in the form of the adaptation of iron to the support of beds. Since Colonial America was an ever-expanding concept, moving relentlessly to settle the next valley, the concept of portability was a key ingredient in the construction of beds. By the 18th century the idea of a relatively lightweight wooden frame assembled above the floor was the norm for most households in town. The frame was held together by only four bolts, one in each corner. In the 18th century and into the early 19th century the bolts were inserted through the post from the outside. The rails joined the posts in a loose mortise and tenon joint to prevent rotation of the rails. The joint was secured when the bolt through the post engaged a matching nut that was implanted into the side rail a few inches down from the joint. 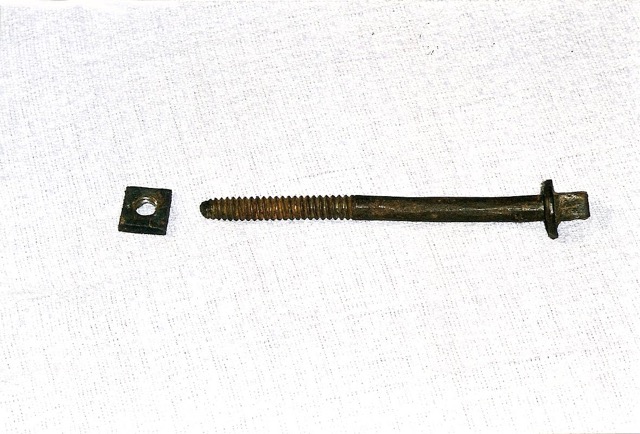 Eighteenth century beds were held together by a handmade bolt through the post from the outside and engaged a nut implanted in the rail. The end of the bolt was exposed to the outside so a decorative bolt cover was often seen on period beds.

The bolts used in this construction were made the same way nails and other threaded fasteners of the period were made – one at a time one by hand, and each bolt and its matching nut were unique. If a bolt was lost during transportation a new matching nut and bolt had to be installed. The square-headed bolt was then tightened with a bed wrench and the frame was secure. It could further be tightened as the frame expanded or contracted. Early examples just left the heads of the bolts exposed but later the pilot holes for the bolts were expanded so that the head of the bolt was actually tightened below the level of the wood. It could then be dressed up by a decorative brass bolt cover. This was the standard technique for bed construction through the Federal period. 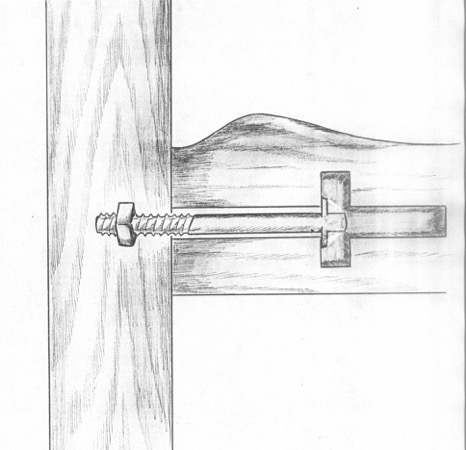 The procedure was reversed in Empire and Rococo Revival-style beds. In these beds the bolt was installed in a channel in the side rails and it engaged a nut buried in the post so that no hardware was visible from the outside.

But Empire and Late Classicism styling required a slight change of application, but not of technology. The introduction of the French design of the “sleigh” bed required that neither the corner bolts nor their decorative covers could be exposed to detract from the sleek lines of the bed frame. The arrangement of the joint was simply reversed. The matching nut was implanted in the post and the bolt was placed in a cut out trough in the side rail. That way nothing of the hardware was visible from the outside. This method was used well into the Rococo Revival past mid-century. But technology marched on. 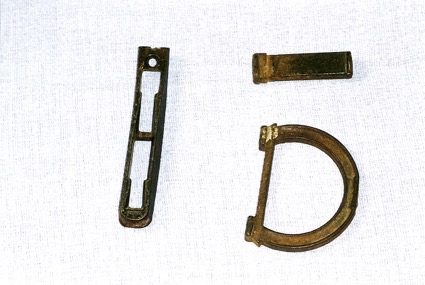 The Victorian period of the mid to late 19th century offered an entirely new take on bed hardware. It consisted of iron fitting that engaged offset teeth in notches in a receiving plate.

After the Civil War, machinery took over much of the furniture production and bed technology took another leap in the form of closed end cast iron “D”-shaped “horseshoes” that had rectangular protrusions on the flat face of the “D.” The horseshoe itself was fitted into a circular race cut in the side rail with the protrusions extending out past the end of the rail. The protrusions engaged a matching cast-iron fitting secured in the bedpost where they entered a matching hole and slid down into a narrow slot – the beginning of the “tool free” bed. Variations of the horseshoe and fitting were the standard through the rest of the 19th century – until technology struck again. 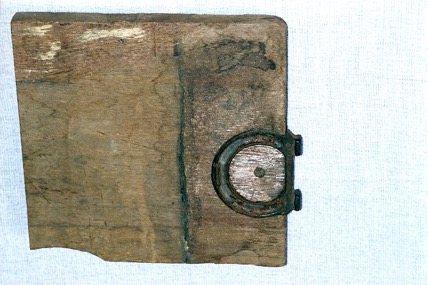 The closed end horseshoe was imbedded in a circular race in the side rail, covered by a block of wood. The exposed square teeth engaged a fitting in the post.

By the end of the century the cast-iron horseshoe was passé and 20th century stamped steel was the ticket. The stamped steel took the form of the two-fingered hook that I had encountered in my first bed. That hook was implanted in the side rail and the extended curved fingers engaged two steel pins, the “silver bullets,” implanted in a slot in the headboard. That was modern bed joinery and is still the standard today after over 100 years of service. Does that make it an antique?