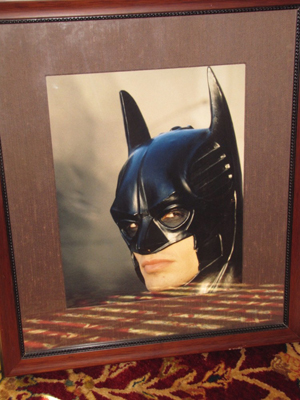 Antonio strikes a pose wearing the very mask that Val Kilmer wore in one of the Batman films.

Antonio Sabato, Jr. (General Hospital, The Bold and the Beautiful, Melrose Place) has a thing for Batman – an obsession, you might say. In fact, he was featured on Oprah once, in a segment titled Celebrity Obsessions. “Yeah, I’m obsessed with Batman,” he said with a laugh from his home in Los Angeles. “If I see something with a Batman logo, I pretty much have to have it.”

And, with the obsession comes a collection, and Antonio’s got a doozy. His home is filled with Batman memorabilia – toys, games, radio-controlled toy cars, action figures, statues, posters (one of which is a limited-edition print signed and given to him by the noted British comic book creator Dave Taylor), a book titled Back to the Batcave, signed by the original TV Batman Adam West (and presented to Sabato as a surprise by Paula Deen on her TV show, where both he and West were guests), a copy of the March 11, 1966 LIFE magazine that featured Adam West as Batman on the cover, and many other items.

He also has boxes full of Batman comic books, some dating back to the 1940s, when Batman was gaining traction as a newly-introduced comic hero. He’s not exactly sure, but he doesn’t think he’s got a copy of Detective Comics #27 (in which Batman made his first appearance, in 1939). It would behoove him to find out, though: a copy sold in 2010 through Heritage Auction Galleries for a little over $1 million. At that time, it set a new world record for a comic book at auction, beating the previous record set, for a copy of Action Comics #1 (Superman’s debut).

Sabato has been a fan of Batman since he was a child growing up in Italy (he came to this country in 1985, at age 13), but admiration turned to obsession in 1992, when he joined Chris Steel’s Steel Boxer gym in Los Angeles. “He’s a Batman fanatic, too,” Antonio remarked, “and he had all sorts of Batman memorabilia filling the gym and a room that was all-Batman. His collection got me to looking for Batman items, too, and before long I was hooked.” Chris later became a stunt coordinator for Antonio’s scenes in General Hospital.

Sabato owns three vehicles that are all tricked out with Batman-themed graphics. Two are motorcycles – a 1993 Harley- Davidson Softail with the Batman logo on both sides of the gas tank, and a 2005 Yamaha R-1, which is currently being rebuilt and has Batman symbols on the tank and panels. He also owns a black-on-black 2005 Infiniti FX45 SUV that’s been outfitted with special LED lights and other aftermarket goodies to give it “a Batman-like look,” as he put it, adding the motorcycles “look like comic book bikes.”

There are a few items of which Sabato is particularly proud. Two of them are the actual masks worn by Michael Keaton and Val Kilmer in their respective Batman movies. The other is a metal Batman boomerang-like spiked weapon that was given to him by a fan. “That item is a reminder that Batman is different from other superheroes in that he doesn’t carry a gun, isn’t on steroids and doesn’t rely on outside help of any kind to catch his criminals,” Sabato said. “And, most impressive of all, he’s a human being, like you and me. He’s not Spider-Man, who got his powers through a bite, or a mythical-like character like Thor. It’s possible he could be shot and killed. His mortality is on the line every time he goes out there to fight crime.”

Sabato even has tattoos of Batman – three, in fact. One shows Batman going through a yellow moon, one depicts him gliding downward with cape billowing for support, and the third (on his shoulder) is of a bat, with red eyes. And, of course, he owns a veritable stockpile of DVDs from the television series and movies. Even his flip-flops and bathrobe are Batman-themed, so right out of the shower he’s reminded who is hero is.

Sabato’s favorite actor to play Batman? “Without question, Christian Bale,” he said right away. “He’s the only one who was true to what I feel is the real Batman character. He didn’t treat the role as a cartoon or just walk through his lines to collect a paycheck. I liked Adam West, too, because he was the first and he obviously had a lot of fun with the part. But Christian Bale took the character seriously and brought him to a whole new level, in my opinion.”

He added, “Batman is a complicated character. He’s well-traveled, highly educated and physically fit. And he’s leading two fascinating lives, one as the wealthy Bruce Wayne, with his loyal butler Alfred, and one as an incredible crime-fighter, with another loyal partner, Robin, and all those wonderful gadgets and the Batmobile, the coolest car ever. It’s a lifestyle I’d like to have myself. But of course I can’t, so for now I’m just looking forward to the next Batman movie, which is due out next summer.”

And what will happen to Antonio’s collection when he passes on to that great Batcave in the sky? “I’ll probably hand it down to my children,” he said (he’s got three; a son, 17, a daughter, 9, and a son, aged 6 months). “The two older ones love Batman, too. My 9-year-old got dressed up as Batwoman for Halloween last year. My youngest isn’t old enough yet, but give him time. I’ll make a Batman fan out of him as well.”

Antonio Sabato, Jr., was born Feb. 29, 1972 in Rome, Italy, to an Italian father (also an actor) and a Jewish Czechoslovakian mother (Yvonne, a realtor). When the family moved here in 1985, he had to learn English as a second language and was enrolled at St. Bernard High School in Los Angeles. From there he transferred to Beverly Hills High School. He became a naturalized citizen of the U.S. in 1996. Thanks to his fabulous good looks, he became an underwear model for Calvin Klein in 1990 and the firm’s celebrity model six years later.

A big break came when he was cast to appear in Janet Jackson’s 1990 music video for the song Love Will Never Do (Without You), along with fellow CK underwear model Dijmon Hounsou. Then, in 1992, another big break: Sabato joined the cast of the daytime drama General Hospital, and viewers took notice: in the three years he was on, the show jumped from seventh to third in the daytime Nielsen ratings. Also in 1992, he was named one of People magazine’s 50 Most Beautiful People.

From General Hospital, Sabato went on to play Heather Locklear’s abusive ex-husband in a six-episode stint on Melrose Place, and he played Dante Damiano, a role created especially for him, on the daytime drama The Bold and the Beautiful. He has also guest-starred on FOX’s Bones, TNT’s hit Rizzoli & Isles, NCIS, CSI: New York and Hot in Cleveland. His dating series My Antonio, set in Hawaii, was a hit for VH-1. He was also the winner on the show Celebrity Circus, on which he performed difficult, Cirque du Soleil-esque acts.

Sabato starred in the movie Ghost Voyage for The Sci-Fi Channel and Destination: Infestation, opposite Jessalyn Gilsig, for the Lifetime Channel. He reprised his General Hospital character, Jagger Cates, on SoapNet’s Night Shift, and recently completed co-starring in the indie drama feature A Mother’s Secret, with Ashley Jones. He starred as serial killer Henry Lee Lucas in the indie feature Drifter: The Henry Lee Lucas Story, for which he won a Best Actor Award at the 2009 Beverly Hills Film Festival.

Sabato has made guest appearances on the TV shows Ally McBeal (FOX) and Charmed (WB). He also appeared opposite Mark Diamond Phillipa and Mark Wahlberg in the feature film The Big Hit, and opposite Tori Spelling in The Help. He is in the recently-released feature film Balls to the Wall, a Penelope Spheeris comedy.

Antonio Sabato, Jr., is a fitness and auto-racing enthusiast and is the author of the book No Excuses: Workout for Life. Fans of the star may visit him online, at www.antoniosabatojronline.com; or, they can tweet him @antoniosabatojr.com. He has over 40,000 followers on Twitter. 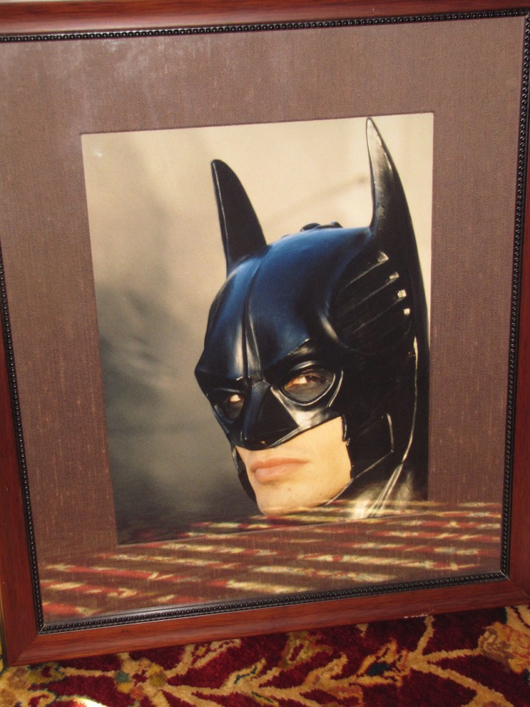 Antonio strikes a pose wearing the very mask that Val Kilmer wore in one of the Batman films. 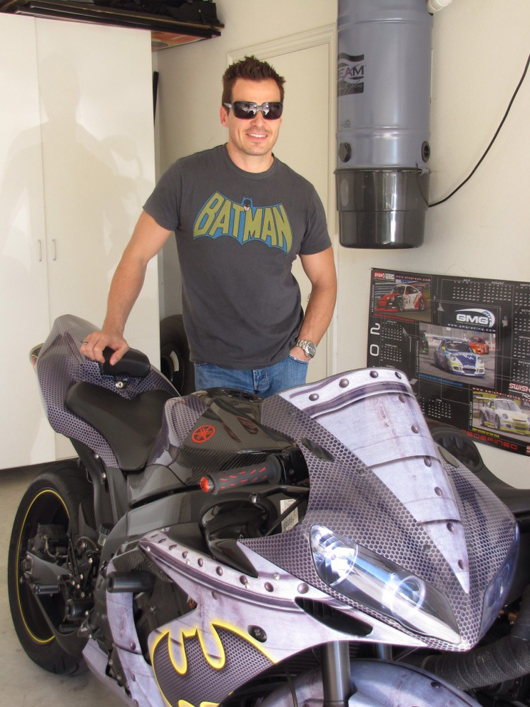 Antonio in the garage of his California home with one of two Batman-themed motorcycles. 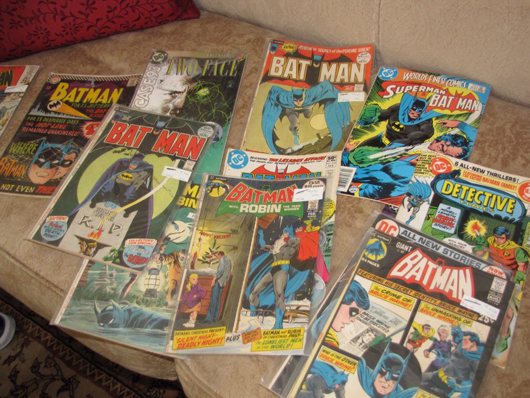 Like all other Batman collectors, Antonio would love to have a copy of Detective Comics #27 (the first appearance of Batman, in 1939). It could be worth $1 million. 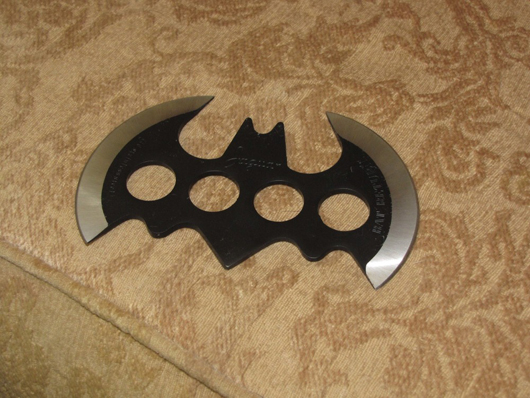 One of Antonio’s prized possessions is this spiked, metal Batman-themed boomerang. 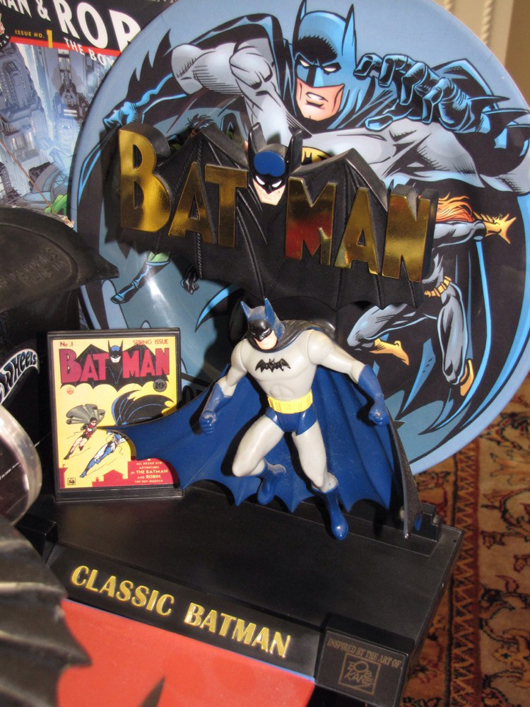 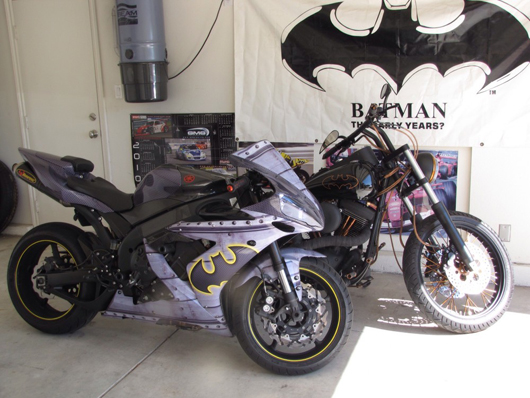 Antonio has not one but two motorcycles tricked out with Batman logos and paraphernalia. 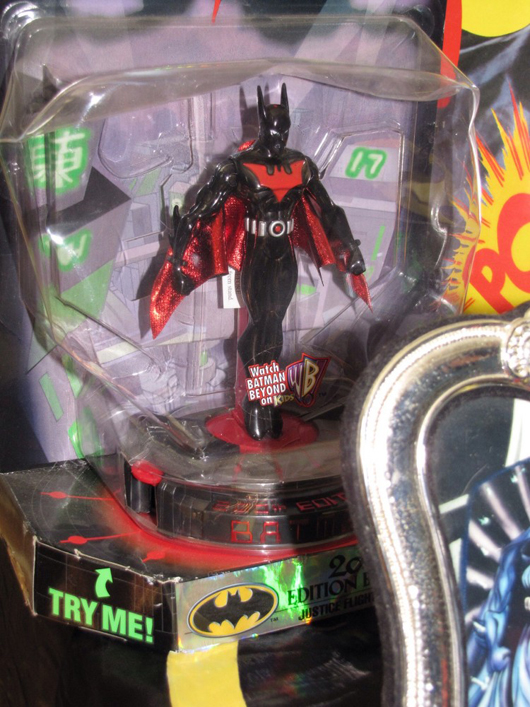 Batman action figure with the original store display that invites buyers to “Try Me.” 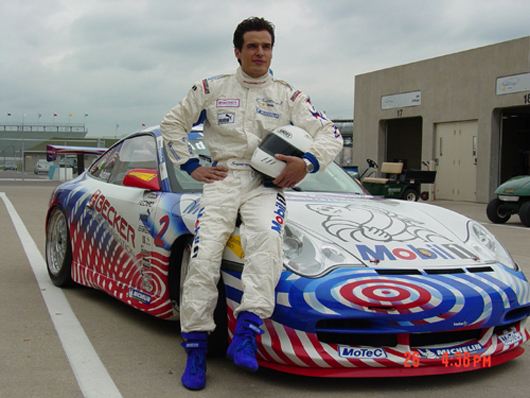 Sabato is a race car driver, a fitness enthusiast, an actor, model and author (of the book No Excuses: Workout for Life).

White House of the Confederacy now open year round