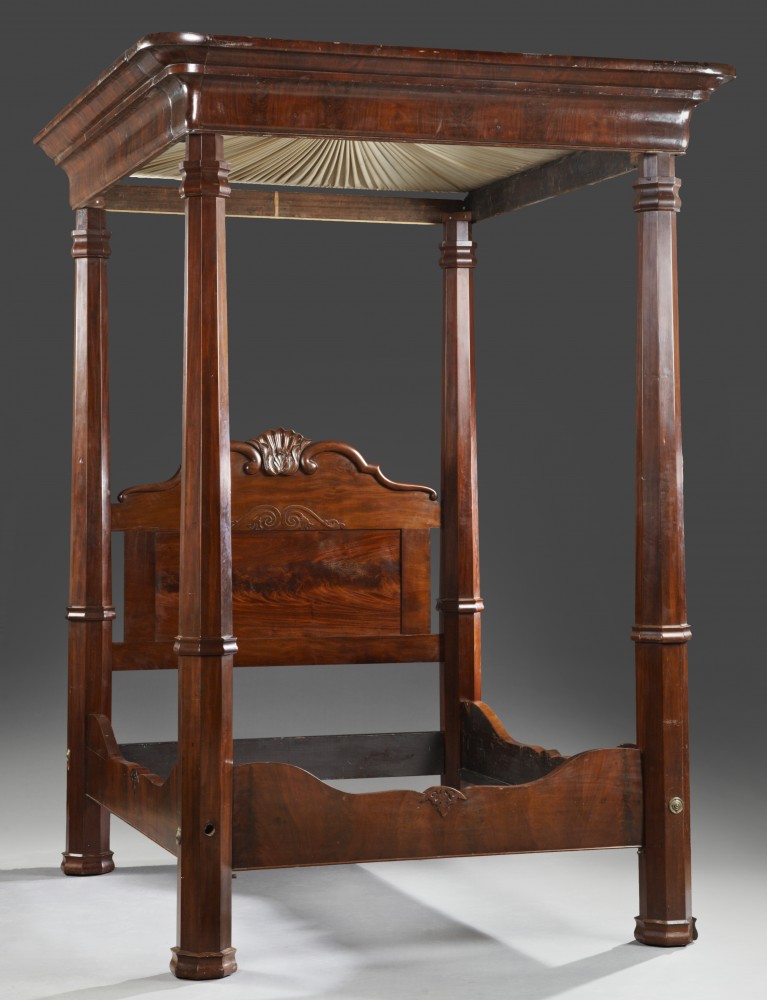 An American rococo mahogany full tester bed made in the mid-19th century sold for $6,150 at an estates auction held July 30-31 by Crescent City Auction Gallery in New Orleans. Also, a Russian icon of St. Antonina, circa early 20th century, 11 1/4 inches tall and with silver oklad and the maker’s mark of KK (Moscow), gaveled for $5,842; and an oil on canvas painting by Alfred de Breanski (British, 1852-1928), titled Departing Day, went for $5,535. Prices include the buyer’s premium. 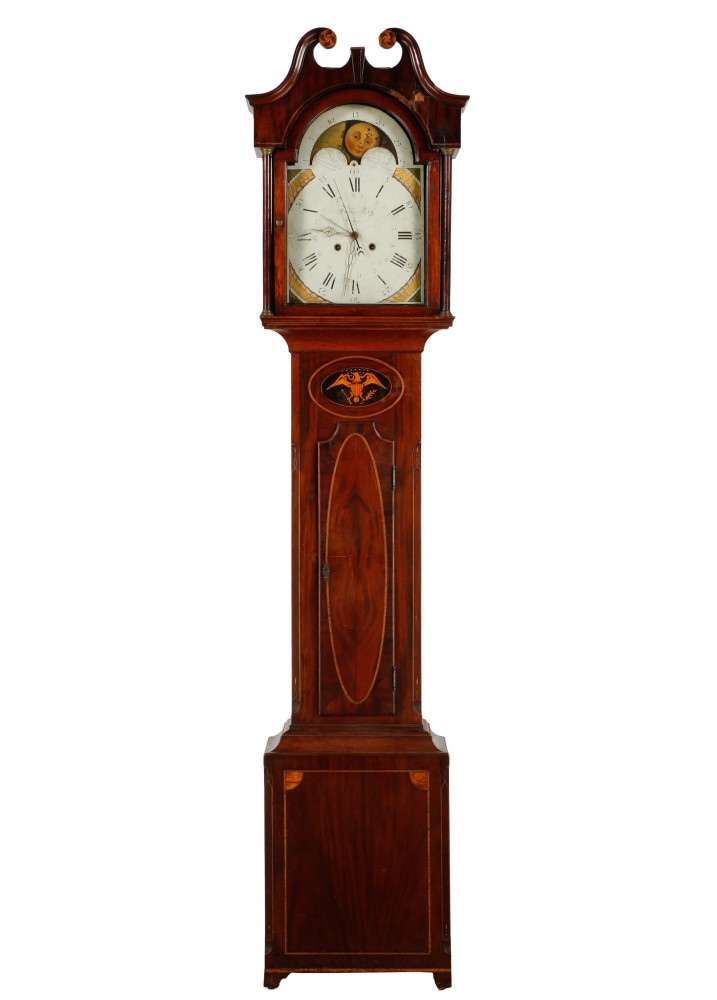 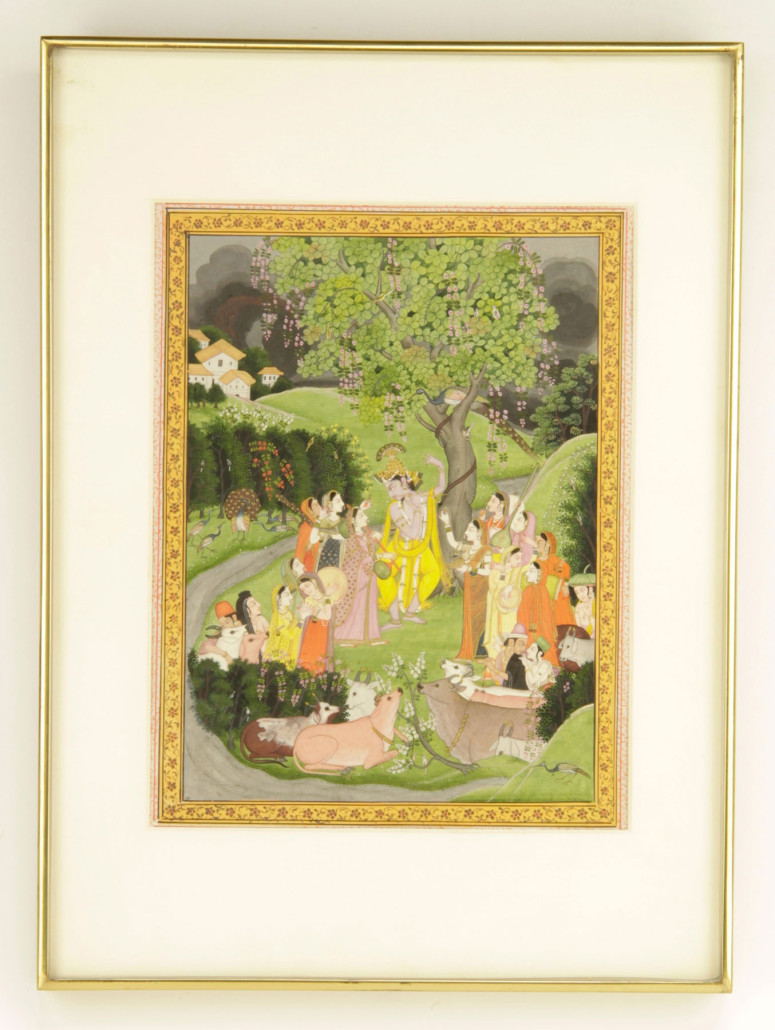 A group of eight circa 1800 framed Indian illuminated manuscript pages sold for just over $245,000 at a sale of the estate of the late Baroness Mary McFall de Gunzburg held July 24 by Kaminski Auctions in Beverly, Mass. The most expensive pages were Royal Tryst and Krishna Dances for the Gopis; both brought $55,200. Also, a 19th century Russian silver kovsh marked “P. Ovchinkova,” showing two Vikings with armor and marked “84” in Cyrillic, made $16,800. Prices include the buyer’s premium. 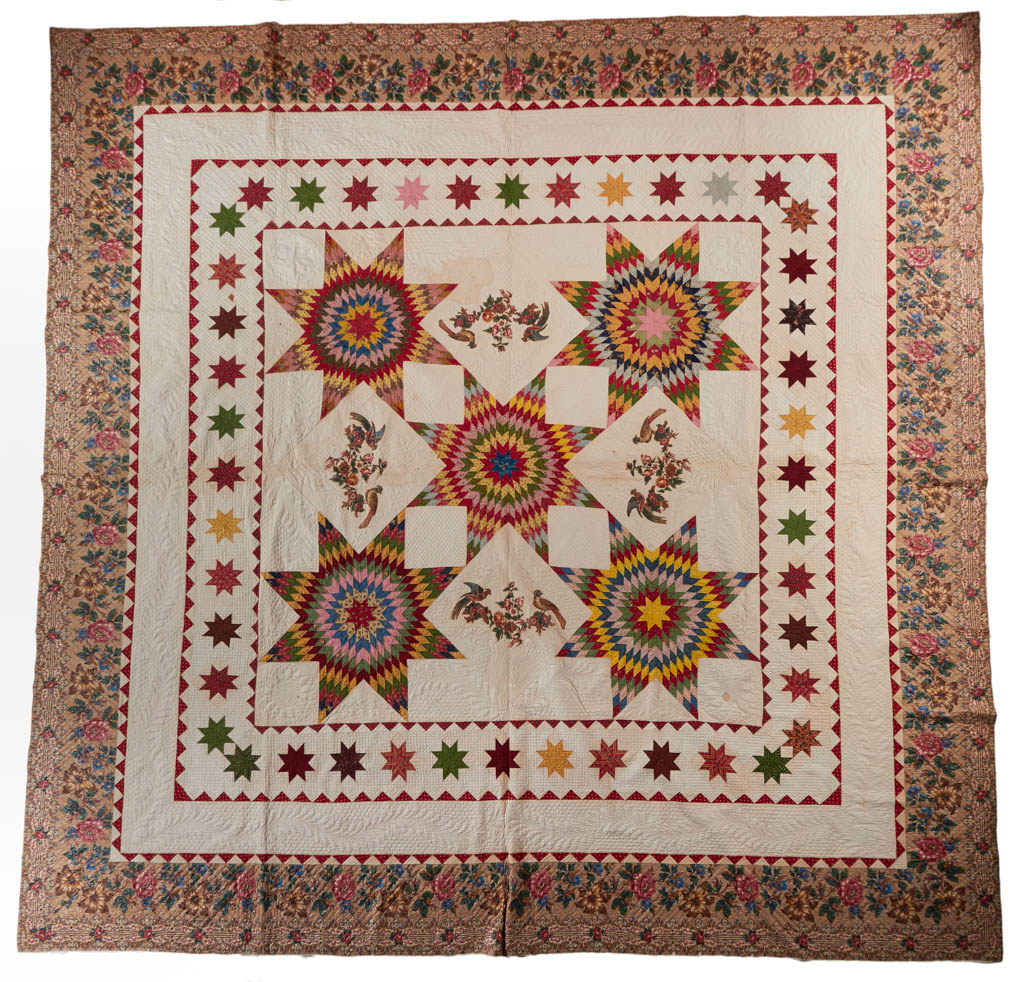 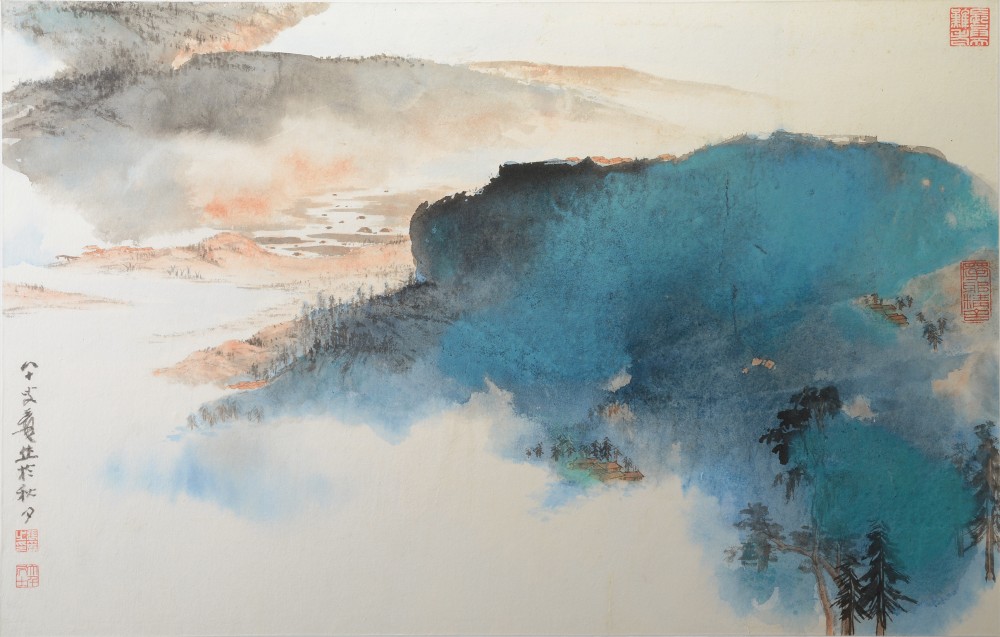 An ink and color on paper painting by Zhang Daqian sold for $118,000 at an estates auction held July 9 by Michaan’s Auctions in Alameda, Calif. Also, a group lot of “eye dZi” beads from the Naomi Lindstrom jewelry collection brought $12,980; a courtly scene woven into a Lavar Kerman rug finished at $5,900; a traditional carved wood Tau Tau figure of a man, rendered by the Toraja, gaveled for $8,260; and a set of early American Punch and Judy folk art puppets went to a California bidder for $4,130. Prices include a 17 percent buyer’s premium. 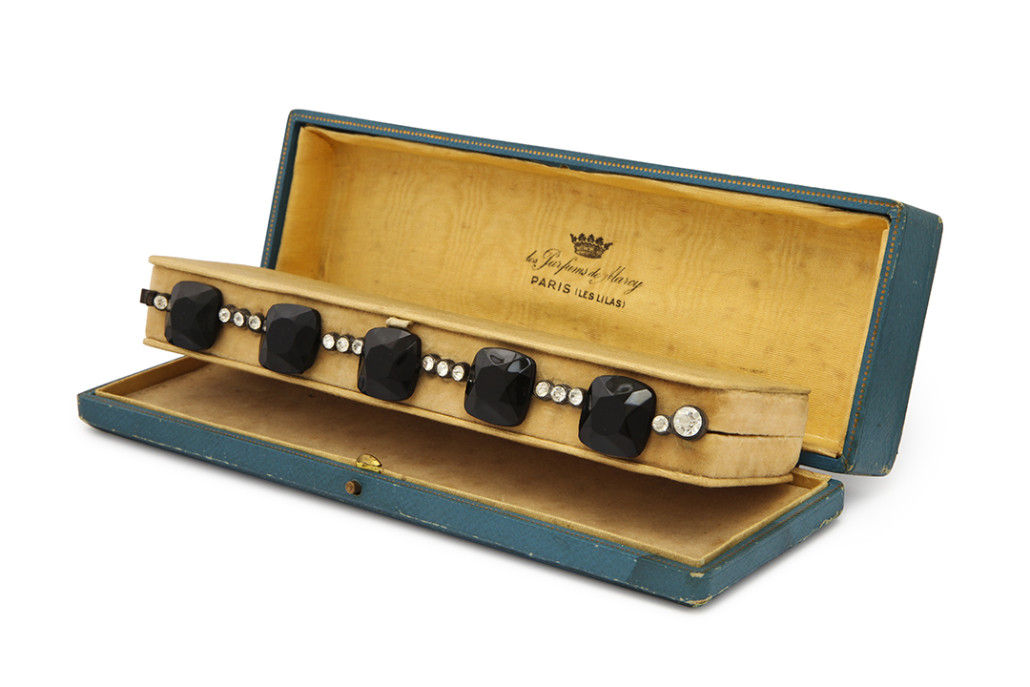 A rare 1928 Parfums de Marcy trompe l’oeil presentation “Le Bracelet Miraculeux” perfume bottle, which held five scents and was disguised as an Art Deco bracelet, sold for $33,000 at the 28th annual convention of the International Perfume Bottle Association held May 29 in Portland, Ore. Also, a 1922 enameled Baccarat bottle for Edouardo’s “Egyptian Alabastron” fetched $18,000; and an Art Nouveau style bottle for Millot’s “Kantrix,” design by Hector Guimard in Paris around 1900 rose to $17,600. Prices are hammer; there was no buyer’s premium. 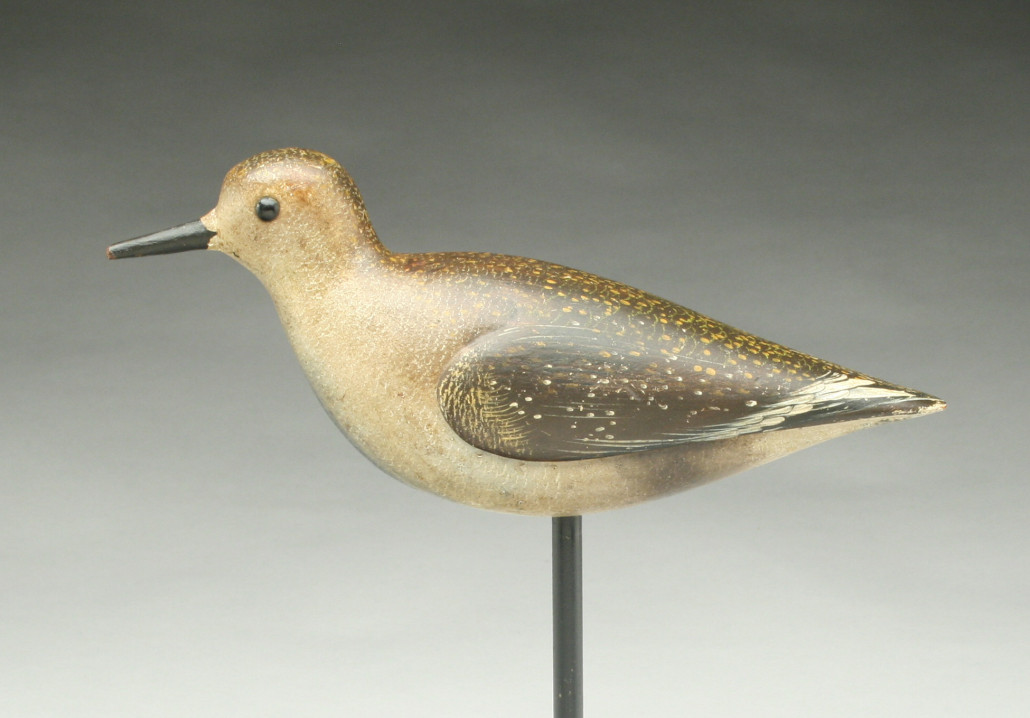 An outstanding golden plover decoy by John Dilley sold for $103,500 at a Summer Decoy Auction held July 28-29 by Guyette & Deeter Inc. (based in St. Michaels, Md.) at the Sheraton Harborside Hotel in Portsmouth, N.H. Also, a preening black duck in the original paint, carved circa 1850 by Albert Laing, soared to $97,750; a bronze sculpture of a bighorn sheep by Carl Rungius went for $100,625; and a superlative pair of 1936 model mallards, executed by the Ward Brothers, finished at $97,750. Prices include a 15 percent buyer’s premium. 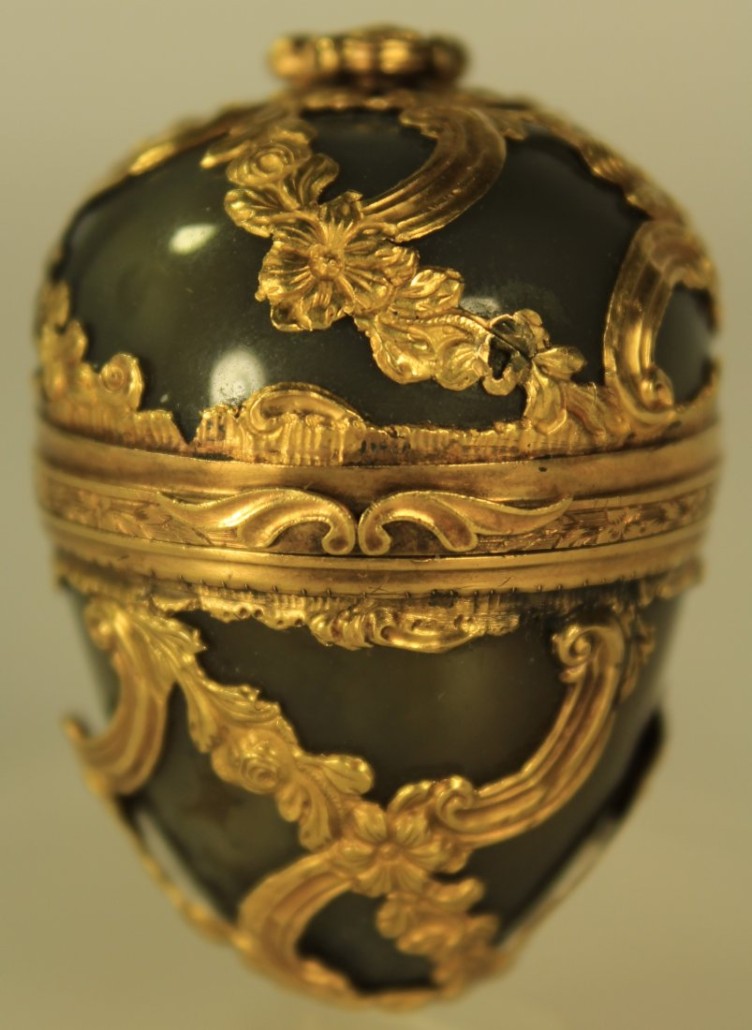 A 22K gold cage-work and agate egg-form pendant sold for $3,750 at a sale of fine and decorative art and jewelry from the estate of comedienne Joan Rivers, held July 20-21 by Litchfield County Auctions in Litchfield, Conn. Also, a Louise Braithwaite oil painting, possibly commissioned by Rivers, went for $2,750; two Wallace sterling silver water pitchers in the Grande Baroque pattern realized $2,500; and a circa 17th century Greek icon of Christ the Pantocrator in a later frame fetched $2,750. All prices include the buyer’s premium. 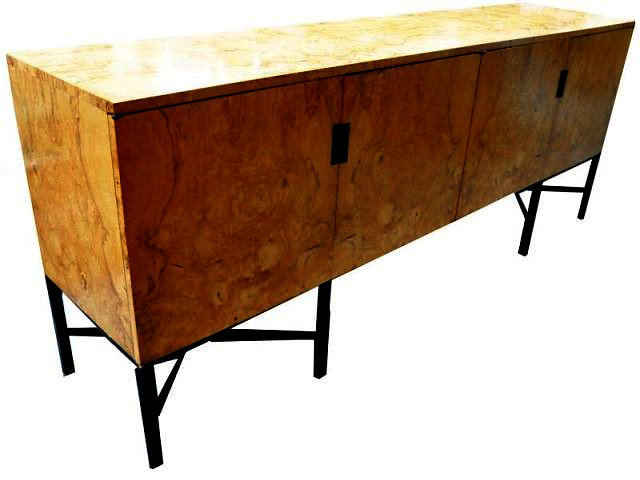 A long, blonde wood, four-door Dunbar credenza sold for $4,830 at an estates auction held July 26 by Direct Auction Galleries in Chicago. Also, a classic design Herman Miller Eames lounge chair and ottoman, crafted of leather and molded plywood, with a veneer of Brazilian rosewood, rose to $3,105; a 14K white gold pendant with a large amethyst and diamonds brought $1,265; and a long chrome base bench with gold tufted upholstery by Miles van der Rohe (1886-1969) realized $1,035. Prices are inclusive of the buyer’s premium. 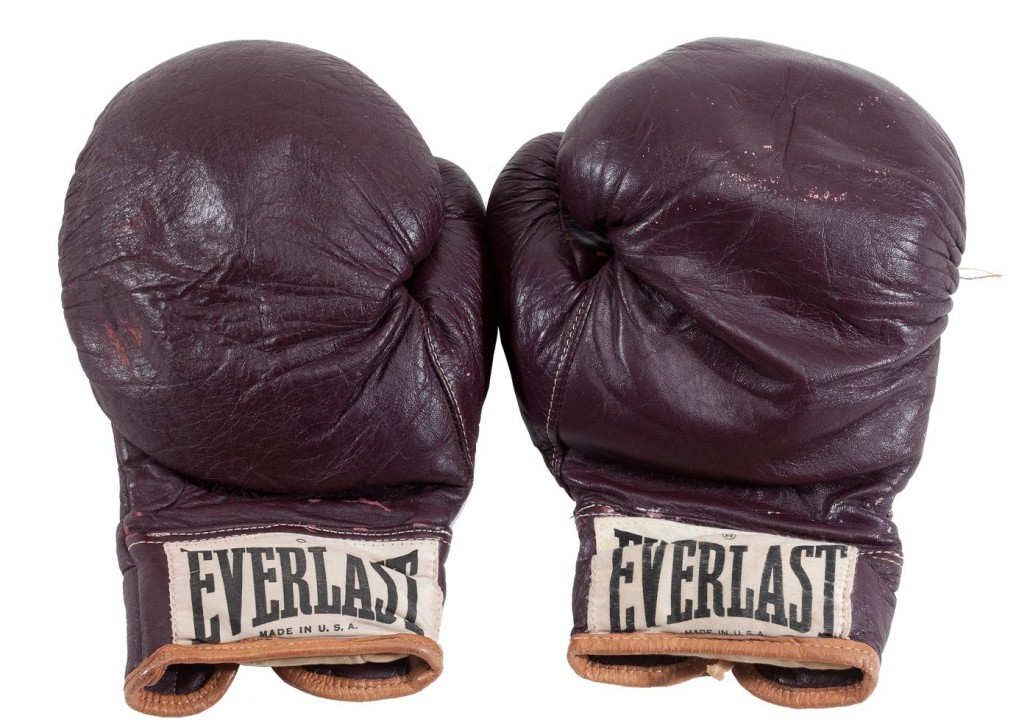 The boxing gloves Muhammad Ali wore in his epic 1971 fight with Joe Frazier sold for $606,375 at a Summer Catalog Auction that ended Aug. 13 by Goldin Auctions, based in Runnemede, N.J. Also, Michael Jordan’s black road uniform (jersey and shorts) from a game between the Chicago Bulls and the Detroit Pistons, played April 13, 1997, reached $69,825; handwritten lyrics from Tupac Shakur’s personal notebook made $31,850; and a gold medal from the 2014 Sochi Winter Olympics hammered for $24,500. Prices include a 21 percent buyer’s premium. 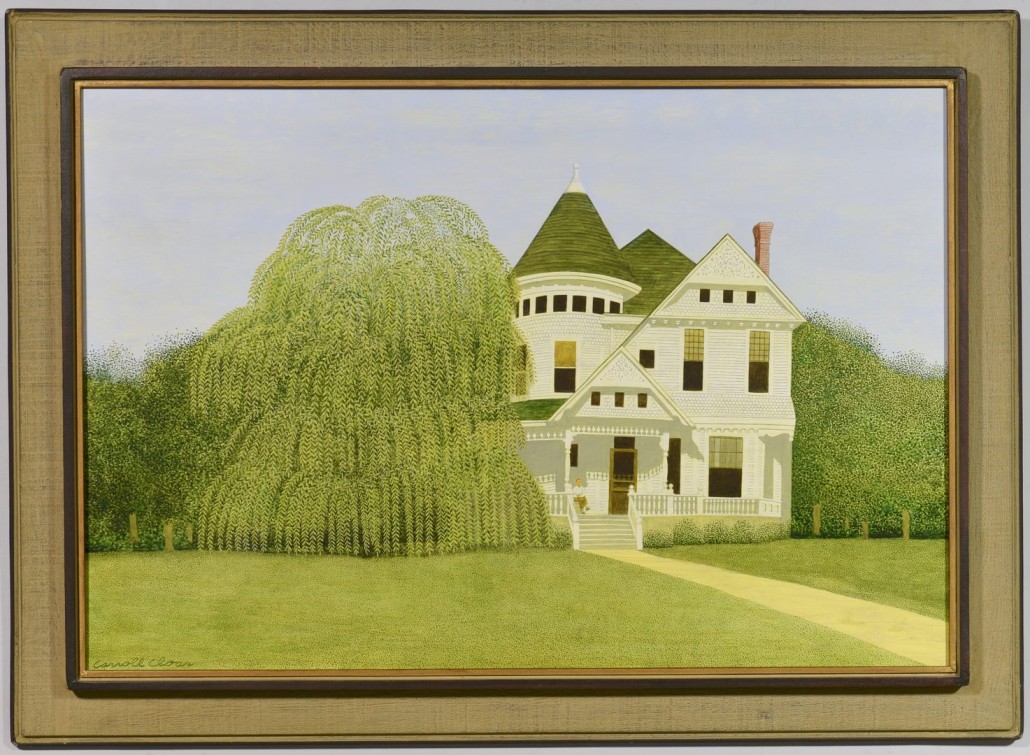 An acrylic on board painting by Carroll Cloar (Tennessee, 1913-1994), titled Weeping Willow, sold for $51,920 at an Historic Southern Summer Auction held July 30 by Case Antiques Auction in Knoxville, Tenn. It was a new world record auction price for the artist. Also, an abstract oil on canvas painting by Spanish/Filipino artist Fernando Zobel (1924-1984) brought $123,900; and a Continental School portrait of a young man, executed either in the 17th or 18th century, changed hands for $41,300. All prices quoted are inclusive of the buyer’s premium. 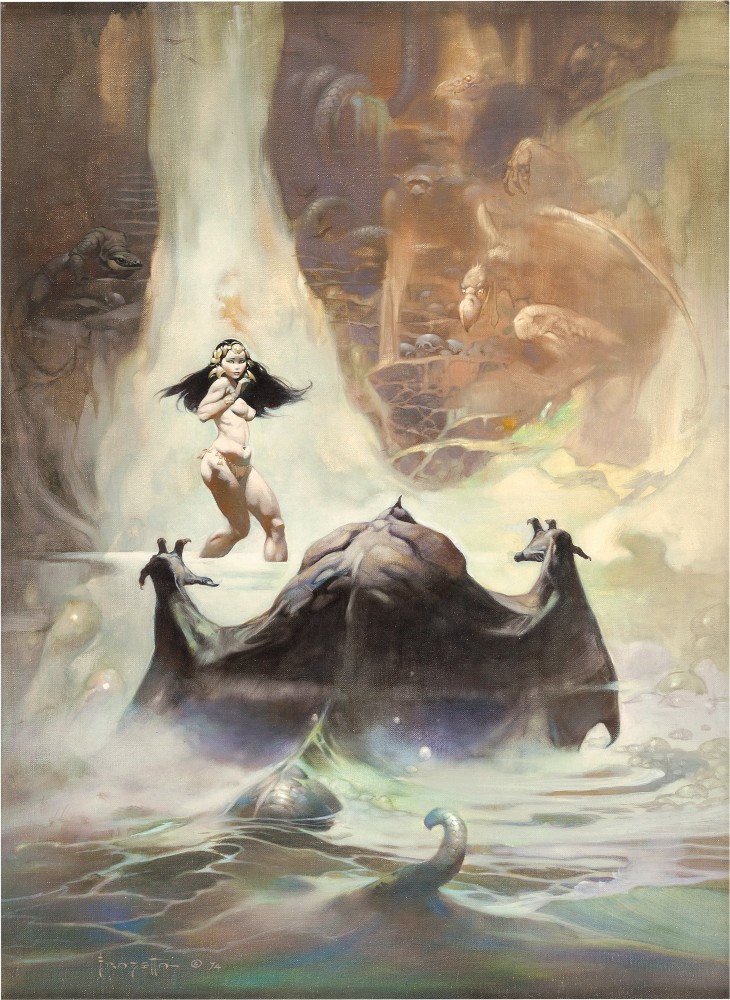 A 1974 color illustration by Frank Frazetta, titled At the Earth’s Core, sold for $1.08 million at a Comics & Comic Art Auction held August 4-6 by Heritage Auctions in Dallas. It was a record auction price for a work by the artist and the most ever paid for a work by an American comic book artist. Also, a copy of Action Comics #1, the first appearance of Superman, graded 5.5 CGC, realized $956,000; and Bernie Wrightson’s original cover art for Swamp Thing #1 from 1972 earned $191,200. Prices include a 19.5 percent buyer’s premium. 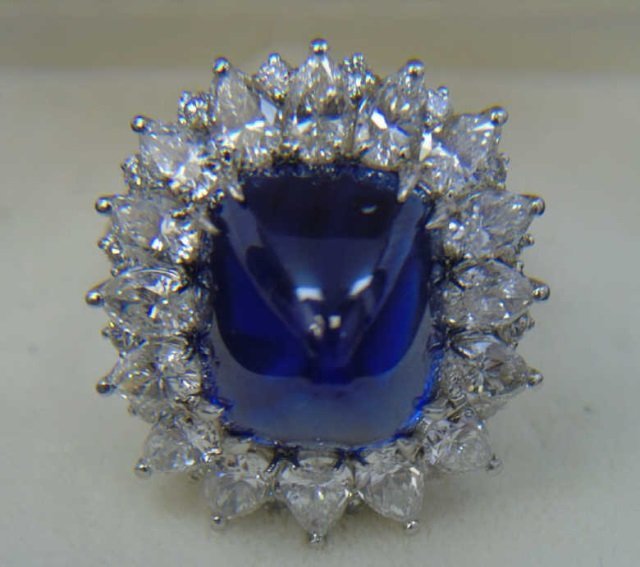 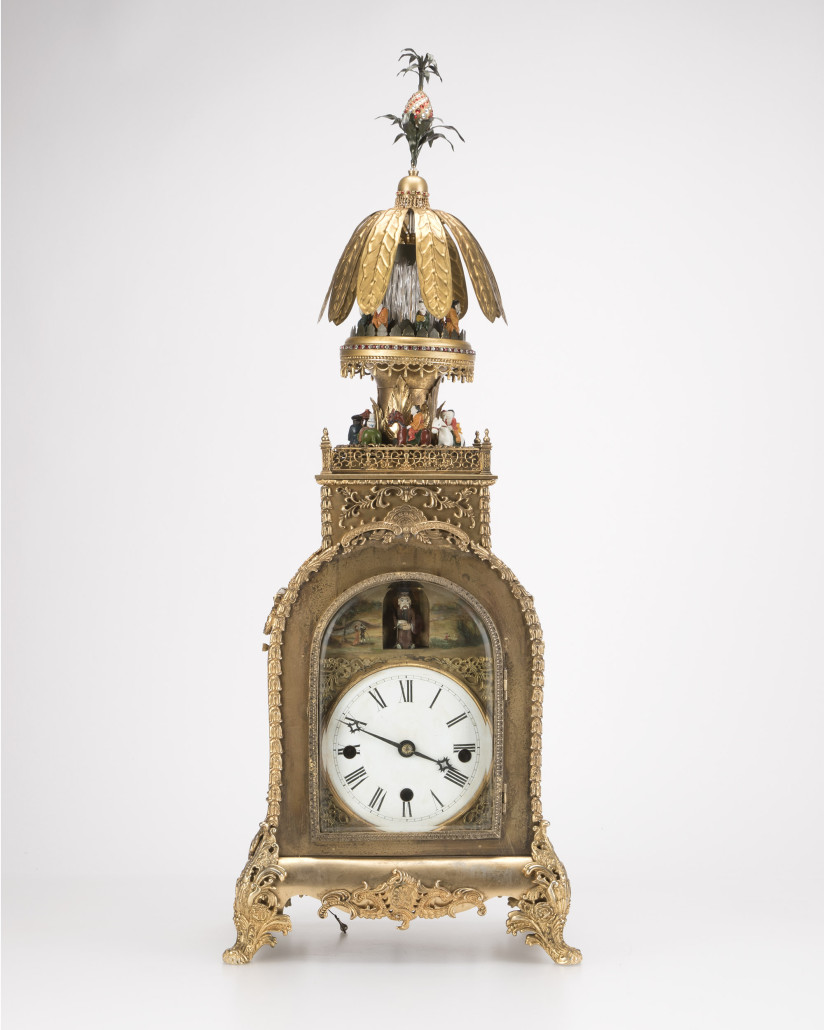 A Chinese export French-style automaton clock sold for $54,000 at a Decorative Art Auction held July 30 by John Moran Auctioneers in Monrovia, Calif. Also, a pair of Sevres-style cachepots with handmade Vincennes-style ceramic flower inserts realized $4,200; a portrait of a woman wearing a nosegay finished at $5,400; a large-scale 18th century Continental School painting of a seated woman of nobility brought $6,000; and a Royal Vienna-style porcelain tea service signed “Wagner” made $13,200. Prices include a 20 percent buyer’s premium. 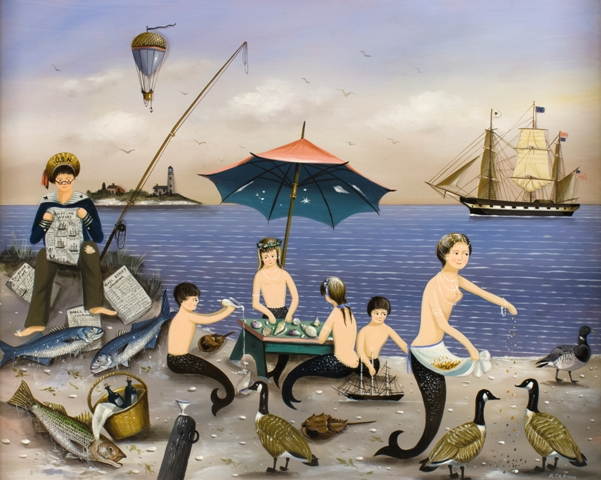 A seaside picnic scene with mermaids and a sailor by Ralph E. Cahoon sold for $31,200 at a Summer Americana & Paintings Auction held Aug. 3-5 by Eldred’s Auction Gallery in East Dennis, Mass. Also, a Gilbert Stuart portrait that descended in the family of the sitter and never before sold at auction realized $25,200; a copy of the will of George Washington fetched $3,900; a Theordore B. Starr sterling silver tennis trophy brought $6,250; and a Federal sewing stand with handkerchief top finished at $9,600. Prices include a 20 percent buyer’s premium. 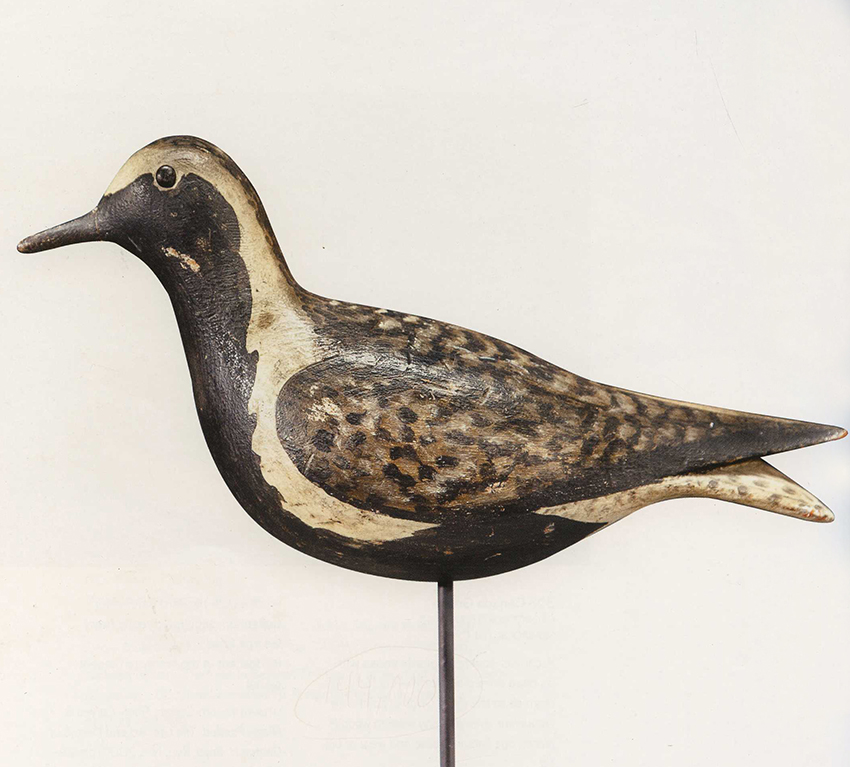 A carved plover decoy known as the McCleery-Holmes plover, made circa 1880 in Kingston, Mass., and previously owned by the noted collector James McCleery, sold for $144,000 at an auction held July 24 by Copley Fine Art Auctions in Plymouth, Mass. Also, a watercolor painting by Andrew Wyeth (Pennsylvania, 1917-2009) was the top lot of the sporting art category in the auction, selling for $63,000; and a wigeon drake by the renowned carver John Blair Sr., went for $90,000. Prices include a 20 percent buyer’s premium. 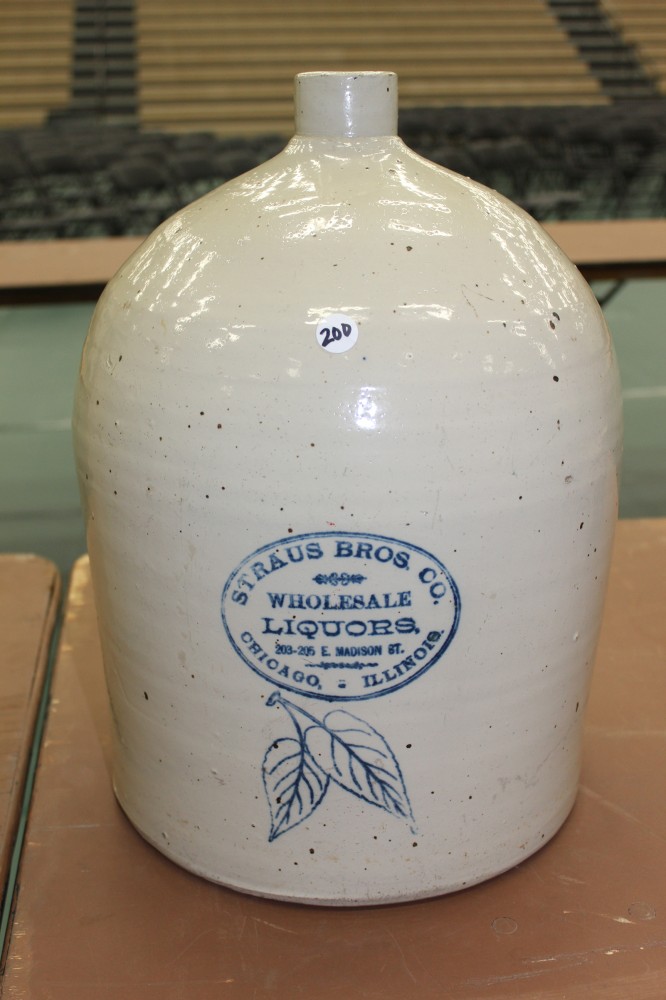