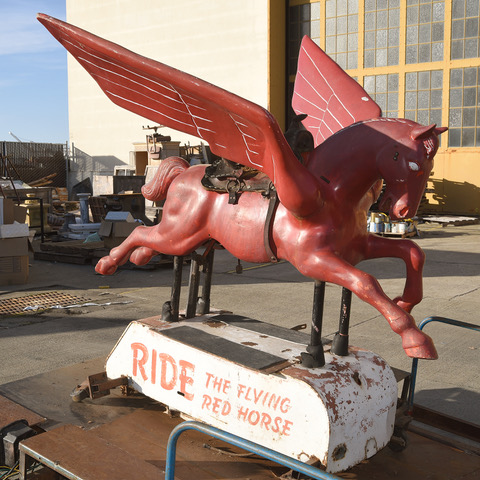 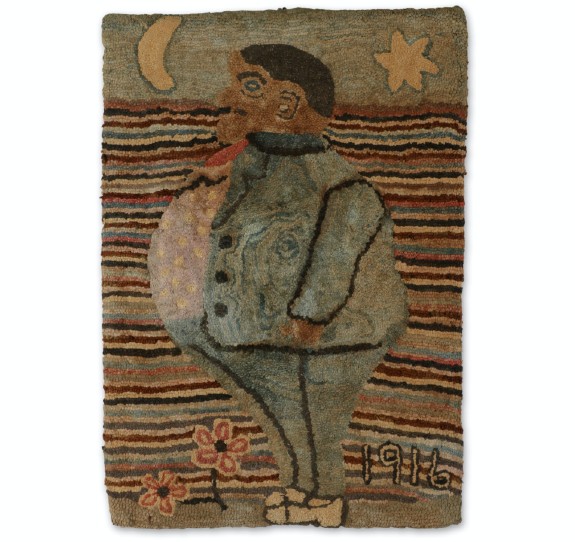 An iconic Canadian “Fat Man” hooked mat from 1916 sold for $17,700 at a Canadiana, Pottery & Folk Art auction held Feb. 8 by Miller & Miller Auctions Ltd. in New Hamburg, Ontario. Also, an oil painting of a horse by J.J. Kenyon galloped off for $11,800; a figural landscape by Homer Watson brought $6,900; and a circa 1940 CBC Radio Canada sign finished at $5,750. Price results for this auction are in Canadian dollars. 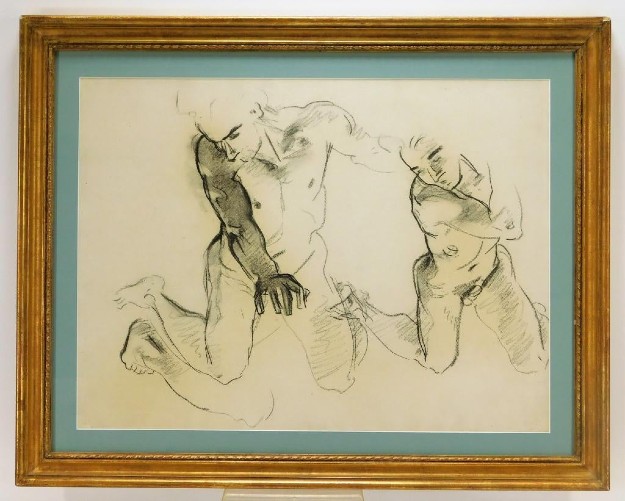 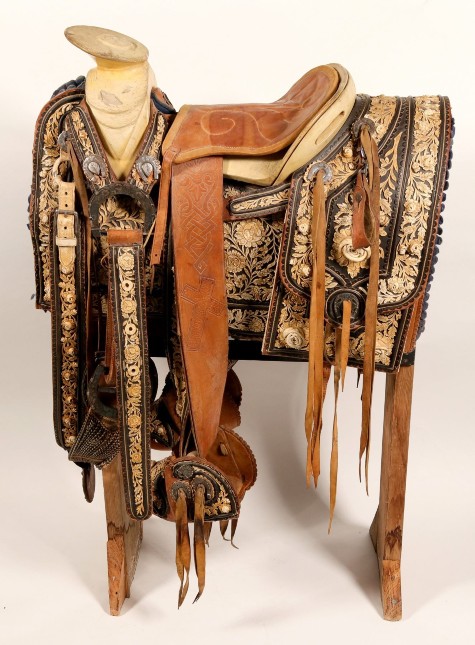 An ornate sterling silvered Mexican Charro parade-style saddle with matching saber, sombrero and accoutrements, used in the Pasadena Rose Parade, circa 1940, sold for $2,500 at an Objects of Our Affection Auction held Feb. 14-17 by Holabird Western Americana Collections in Reno, Nev. Also, a painting by Nevada gaming artist Frank Trevors (1907-1980), titled War Party On the Move, rose to $6,250; and a collection of Gold Rush-era Alaska tokens sold as one lot for $5,375. 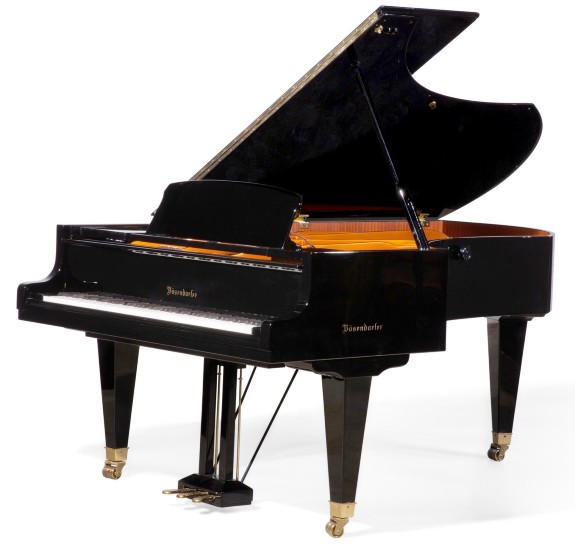 A Bosendorfer black lacquered grand piano, Model B225, circa 1986, sold for $46,250 at the first-ever Collections Curated by Designers of Distinction auction held Feb. 23 by Andrew Jones Auctions in Los Angeles, Calif. Also, a 19th century 24-light chandelier made by Perry & Co. (England) lit up the room for $40,000; a pair of late 18th century Louis XVI gilt bronze and marble two-tier étagères brought $45,000; and a Chinese Ming Dynasty huanghuali armchair made $37,500. 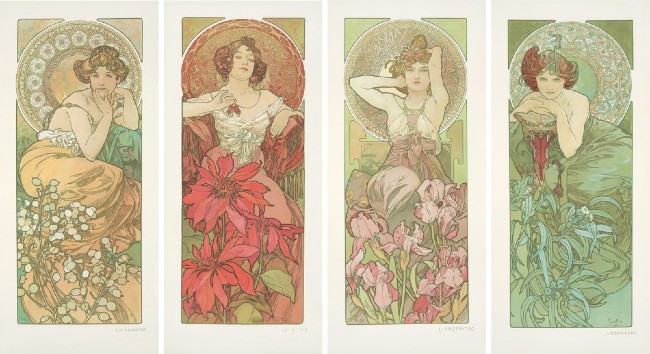 A Tiffany Studios Peony Border floor lamp, 77 inches tall, lit up the room for $151,250 at an auction held Jan. 16 by Fontaine’s Auction Gallery in Pittsfield, Mass. Also, a Pairpoint Puffy Owl lamp brought $78,650; an Armenian bible with a silver repousse cover depicting Jesus on the cross, flanked by Mary and Joseph, with a Nativity scene on the back, hit $48,400; and an oil on canvas painting by Elliott Daingerfield titled are inclusive of the buyer’s premium. 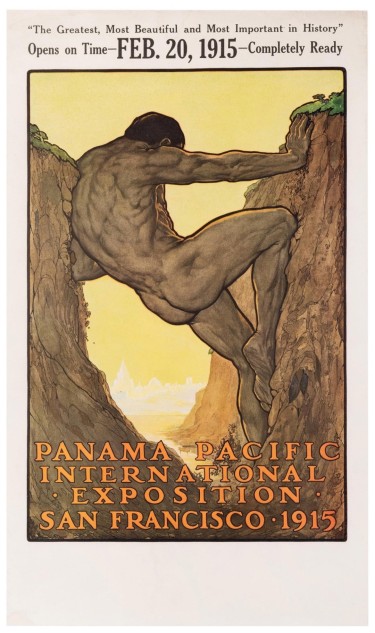 A poster titled Panama Pacific International Exposition by Perham Nahl, created to advertise the opening day of the 1915 World’s Fair in San Francisco and illustrated with the 13th Labor of Hercules, sold for $4,800 at a Vintage Posters auction held Jan. 25 by Potter & Potter Auctions in Chicago. Also, The Tree of Evil, a 1912 Communist propaganda poster that depicted Karl Marx leading a laborer to cut away the roots of ignorance that give strength to “diseases and crime” rose to $2,400. 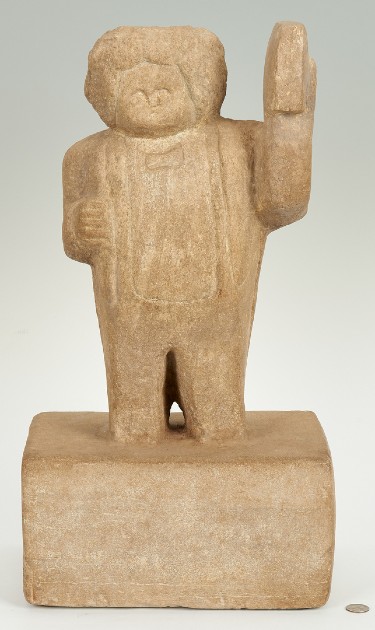 A William Edmondson limestone sculpture, depicting a preacher with a bible raised in his left hand, sold for $540,000 at an auction held Jan. 26 by Case Antiques Auctions in Knoxville, Tenn. Also, a painting by Carroll Cloar titled The Landlady went for $66,000; a sand art bottle by Andrew Clemens realized $66,000; an oil on board by Gilbert Gaul titled Woman Sewing knocked down for $14,400; and an oil on board by Clementine Hunter titled Picking Flowers made $8,400. 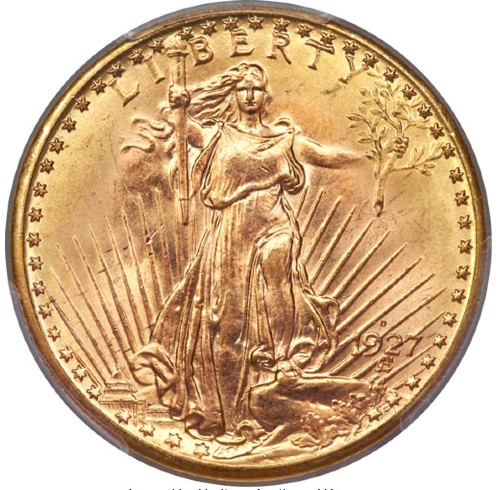 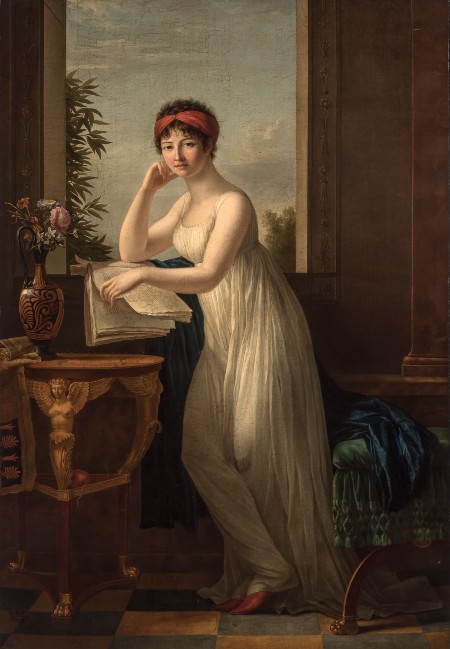 A portrait painting of Madame Leclerc (born Pauline Bonaparte), done circa 1798-99 by Marie-Victoire Lemoine (French, 1754-1820), sold for $387,000 at a sale of Old Master Paintings & Drawings held Feb. 5 by Doyle in New York City. Pauline Bonaparte was the younger sister of Napoleon I. She was married at age 17 to the French general Charles Leclerc in 1797. After he died from yellow fever in 1802, she married the Roman Prince Camillo Borghese of Italy. 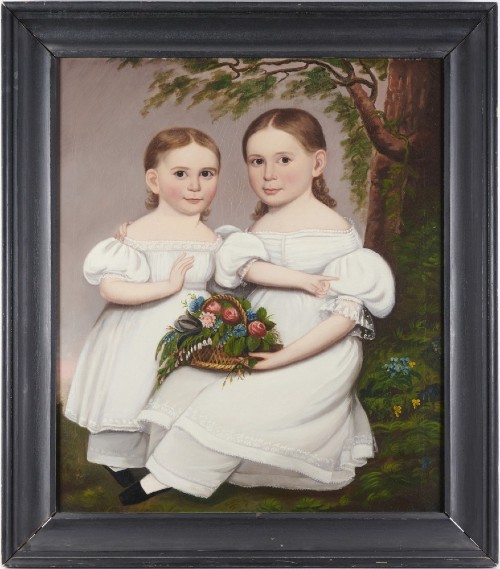 A double oil portrait by Hannah Fairfield of Lucy Adams Tracy and Ellen Nichols Tracy, circa 1839, sold for $21,250 at an auction held Jan. 30 by Millea Bros. in Boonton, N.J. Also, a pair of English naturalistic porcelain bodkin cases, probably Chelsea, circa late 18th century, rose to $17,500; a Francis Sartorius oil on canvas of Whinigig (winner of the 1769 Jubilee Cup) and his groom fetched $13,750; and a George Lambert oil on canvas view of Dover Castle and Bay (1738) made $11,250. 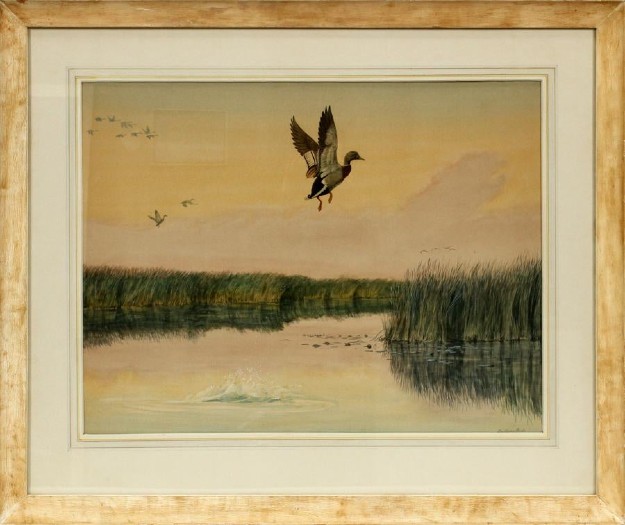 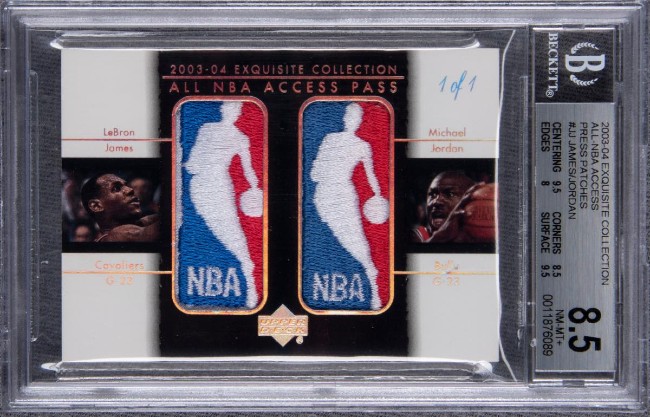 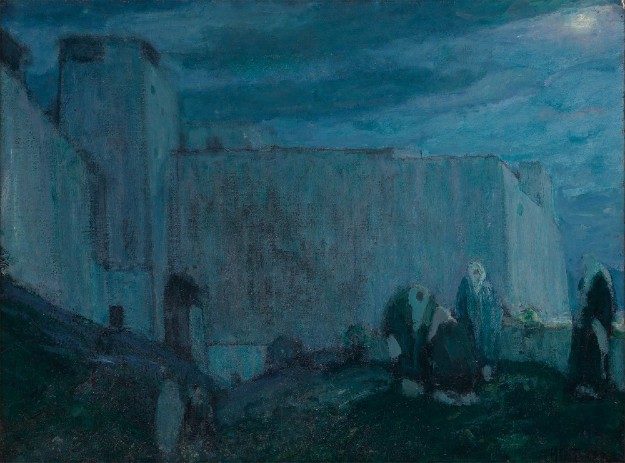 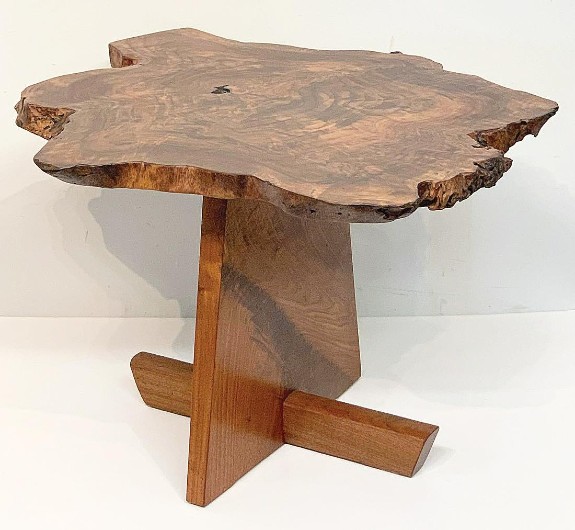 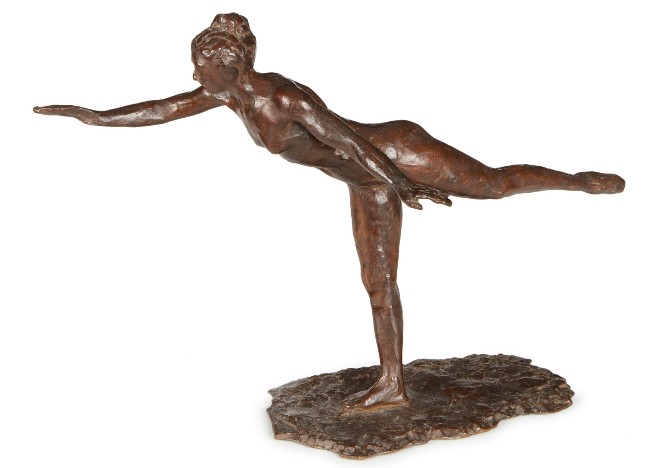 A Paul Evans dining set consisting of a glass-top table (shown) and six chairs sold for a combined $43,200 at an auction held Sept. 25 by Fairfield Auction in Monroe, Conn. Also, a marble figure of a maiden by Gaetano Mercanti, 41 inches tall, achieved $8,400; a Rolex Explorer watch sold for $13,200; a lithograph by Charles Sheeler, from his Industrial Series #1, knocked down for $38,400; and a turned tulipwood bowl by Ed Moulthrop went for $1,440. 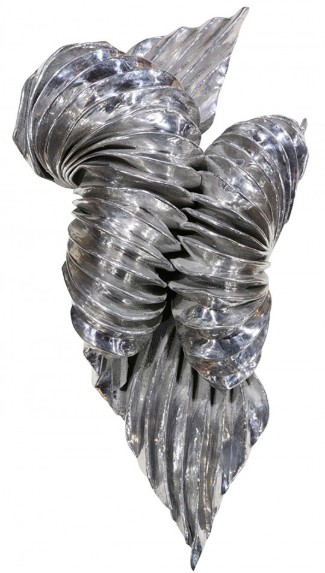 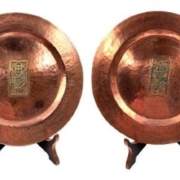 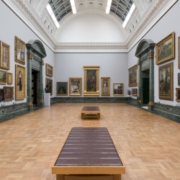 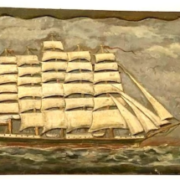 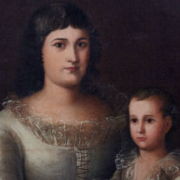 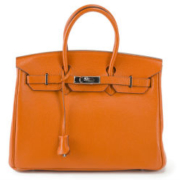 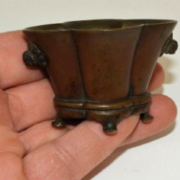 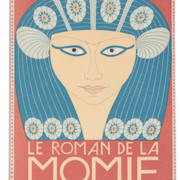