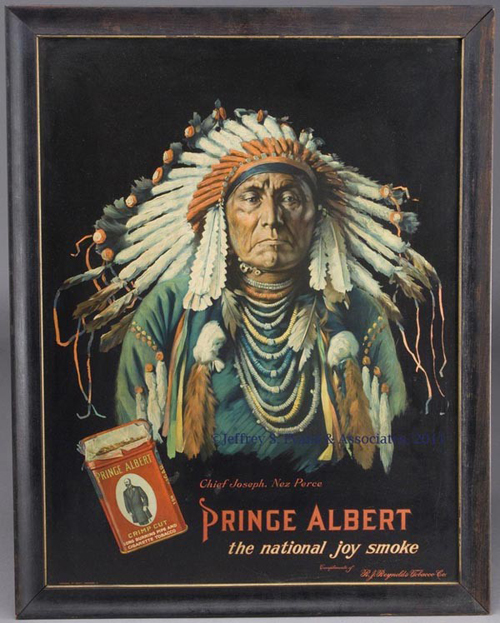 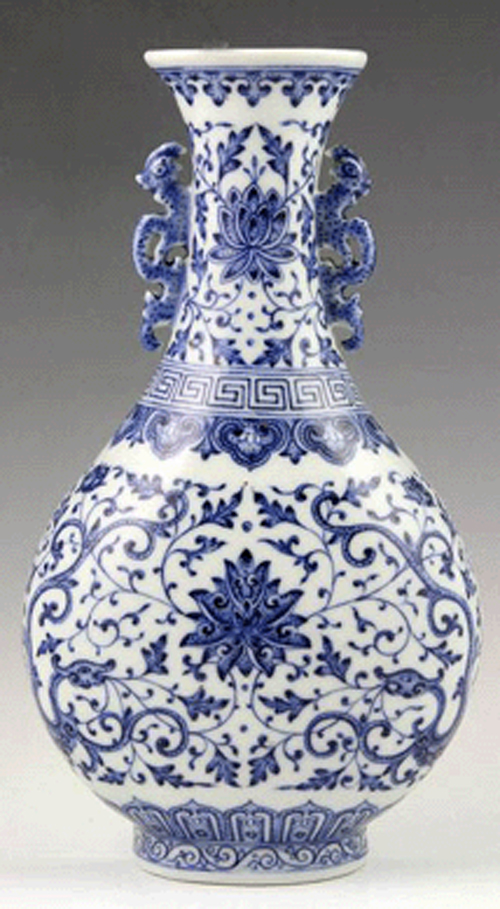 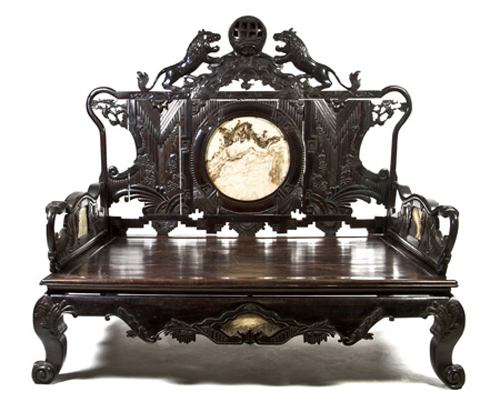 A Chinese carved hardwood opium bed with inset marble panels sold for $53,680 at a sale of the property from O’Hara’s Gallery held Jan. 22-24 by Leslie Hindman Auctioneers in Chicago. Also, a suite of French giltwood parlor furniture decorated with Vernis Martin lacquer work realized $23,180; a pair of Empire gilt bronze 36-light chandeliers lit up the room for $21,960; a pair of gilt bronze mounted cobalt urns brought $10,370; and a French champleve and porcelain mounted mantel clock hit $9,300. Prices include a 20 percent buyer’s premium.

A Queen Anne brass face tall clock by Edward Duffield of Philadelphia, in an excellent state of preservation and with an old dry surface, sold for $118,500 at a sale of Period Furniture, Fine Arts & Accessories held Jan. 13-14 by Pook & Pook, Inc., in Downingtown, Pa. Also, a Philadelphia William & Mary mahogany spice (or valuables) box on frame, made of a single piece, went for $112,575; and an original painting of the American side wheeler J.B. Schuyler by James Edward Butterfield soared to $94,800. Prices include an 18.5 percent buyer’s premium.

A rare, museum-quality mechanical rosewood drop-front secretary desk, made around 1860 and attributed to Thomas Brooks, sold for $21,280 at a multi-estate sale held Dec. 31 by Stevens at Flomaton in Flomaton, Ala. Also, a six-piece parlor set by John H. Belter in the Rosalie with Grapes pattern and crafted circa 1850 realized $15,680; a palace-size 48-inch Nicole Freres Pat. 1815 Swiss cylinder music box went for $12,320; and a queen-size half tester bed signed McCracken & Brewster made $10,080. Prices include a 12 percent buyer’s premium. 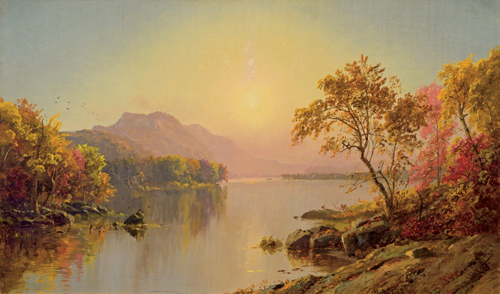 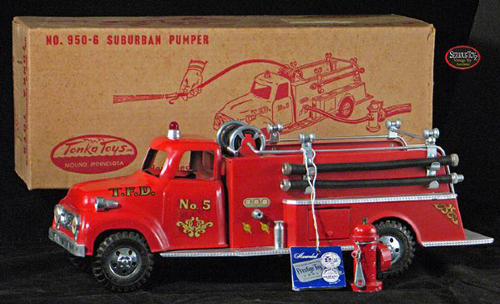 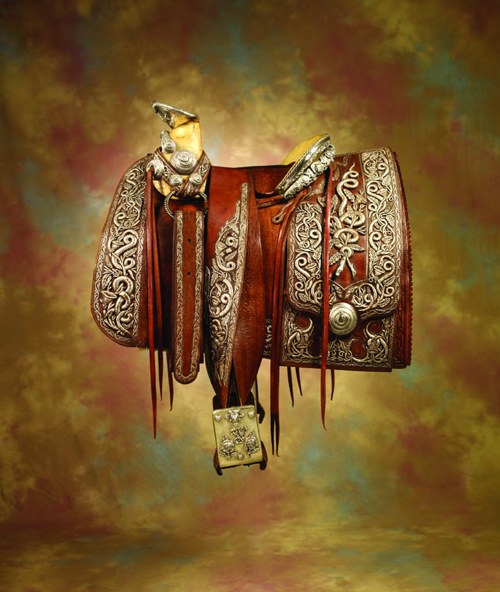 A silver embroidered saddle that belonged to the infamous renegade and revolutionary hero Pancho Villa, the last saddle he rode on prior to his assassination in 1923, sold for $718,000 at the High Noon Western Americana Auction held Jan. 28 in Mesa, Ariz. It was a new world record for a saddle at auction. The historic saddle had been created for Villa by renowned Mexican artisans and was smothered in silver-wrapped threads over leather stump work. Each stirrup carried Villa’s engraved initials. The price includes a 15 percent buyer’s premium. 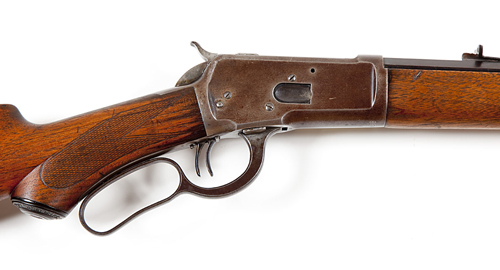 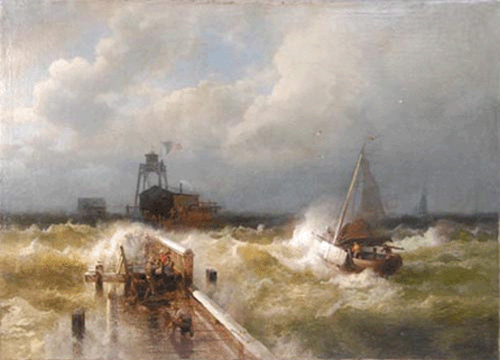 An original oil on canvas painting by Hermann Herzog titled Rough Seas at the Life Saving Station sold for $44,850 at a New Year’s Day auction held Jan. 1 by Nadeau’s Auction Gallery in Windsor, Conn. Also, a painting on porcelain by Louis Ferdinand LaChassaigne, depicting circus characters, hammered for $14,950; an oil on board painting by Abraham Manievich, titled Bronx, N.Y., realized $11,500; and a pair of Meissen figures showing a preacher and his wife went for $7,475. Prices include a 15 percent buyer’s premium.

A broadside for White Star Line, operators of the doomed ocean liner the Titanic, advertising the ship’s planned return voyage from New York in 1912, sold for $72,000 at a sale of Rare & Important Travel Posters held Nov. 11 by Swann Auction Galleries in New York. Also, a poster advertising Australia, Gert Sellheim’s “Australia / Surf Club,” Melbourne, circa 1936, brought $24,000; and a previously unseen variation of “Cunard Line / Monarchs of the Sea / Lusitania,” Liverpool, circa 1907, topped out at $14,400. Prices include a 20 percent buyer’s premium. 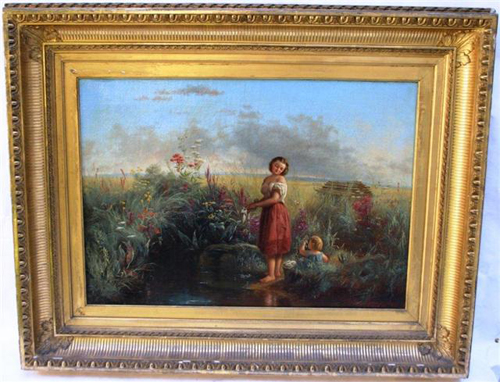 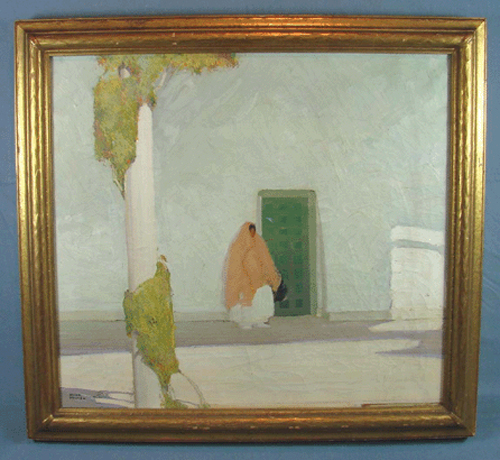 An original oil painting by Victor Higgins (New Mexico/Illinois, 1884-1949) sold for $728,000 at an auction held in late 2011 by Mapes Auctioneers & Appraisers in Vestal, N.Y. The buyer was a phone bidder in Italy. The seller was a man who was retiring and brought the painting to Mapes for consignment in the next sale. The work had been in his family for generations and had never been cleaned. Higgins was a key member of the Taos, N.M., Society of Artists, known for landscapes, Indian genre works and portraits. The price includes a buyer’s premium. 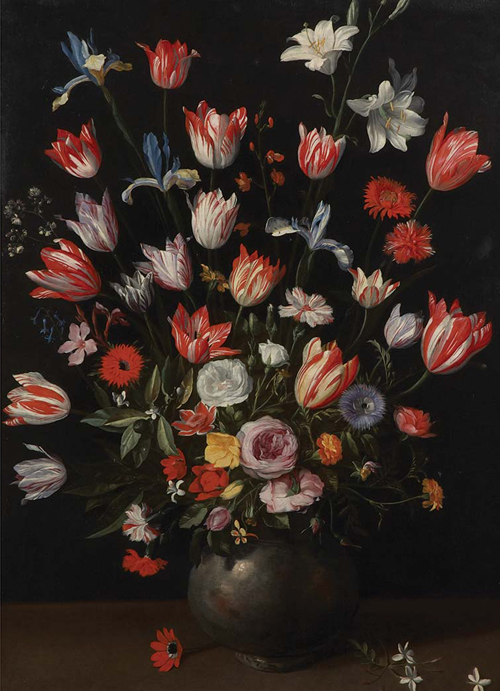 A classic Old Masters painting by the Flemish artist Daniel Seghers (1590-1661) titled Still Life of Tulips and Other Flowers in a Vase sold for $74,500 at a sale of Important English and Continental Furniture & Decorations held Jan. 24 by Doyle New York in New York City. Also, a late 19th-century Persian Tabriz carpet, 18 feel by 11 feet, garnered $43,750; a large Louis XV gilt-bronze cartel clock signed “Furet a Paris” went for $68,500; and a George II silver tankard with rubbed marks made $31,250. Prices include a 25 percent buyer’s premium.

A rare and important Waltham girandole clock made around 1900 sold for $17,255 at an auction held Dec. 28 by Gordon S. Converse & Co. in Malvern, Pa. The ornate banjo-style clock was marked with serial no. 1, making it possibly the first of fewer than 50 made. Also, a display of various Chinese Imperial seals, all contained in a carved Zitan box, knocked down at $6,545; and a patented clock by the New Jersey clock maker Aaron Crane, featuring a torsion pendulum, hammered for $6,545. Prices include a 19 percent buyer’s premium.