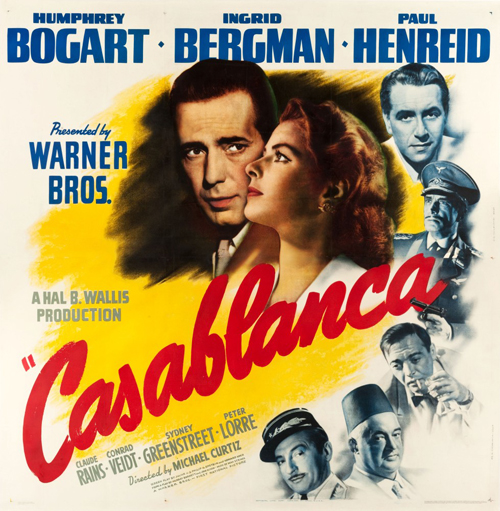 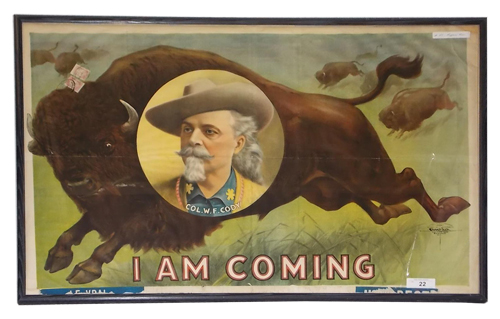 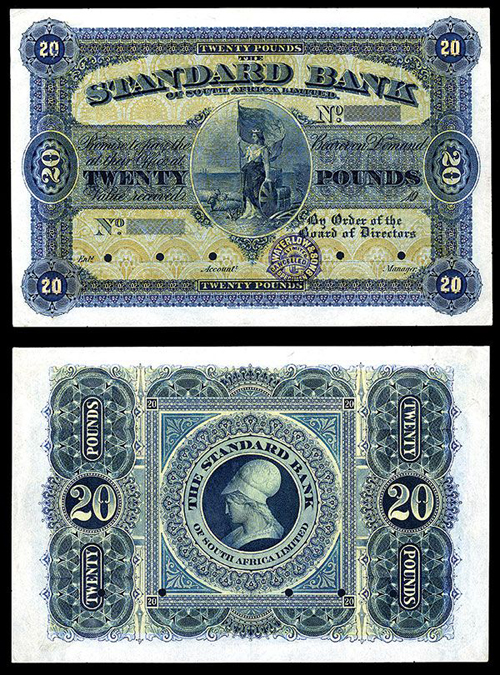 An early 20th century South African color trial specimen banknote in a 20-pound denomination, printed in blue with gold underprint and in Choice AU condition, sold for $10,620 at an auction held April 16 by Archives International Auctions, based in Fort Lee, N.J. Also, a 1918 Australian 10-Shilling issued banknote, one of only five known, climbed to $7,080; a 1930 issued banknote from the Bahamas in Choice VF35 condition realized $5,610; and an unusual 1919 Kingdom of Yugoslavian 10 Dinara note hit $5,190. Prices include an 18 percent buyer’s premium. 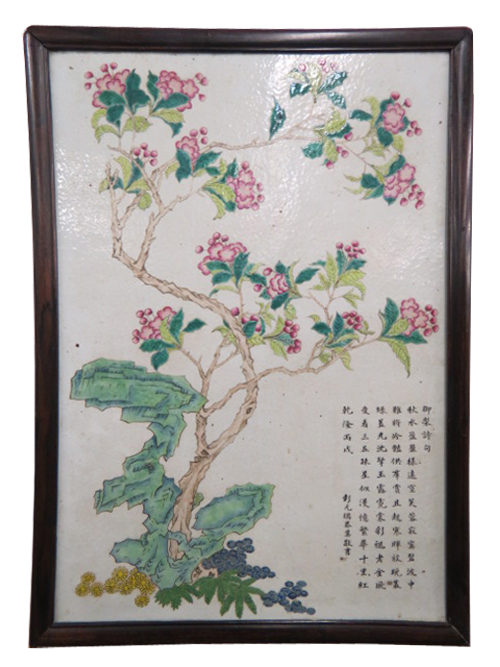 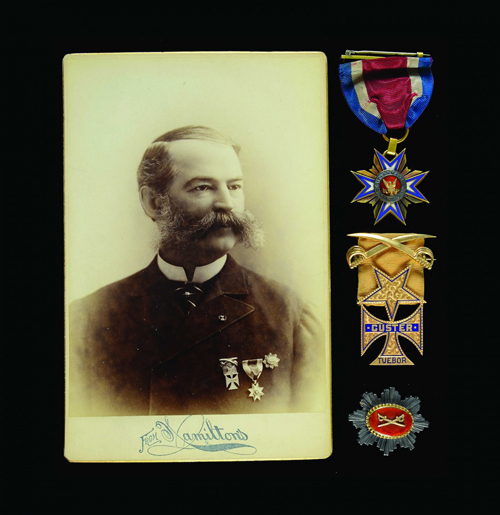 A 7th Michigan Cavalry grouping of the last commander of Gen. George Custer’s original Civil War Regiment, including a gold Custer Valor Medal, authorized only by Custer for recipients in his Michigan brigade, plus a piece of the Appomattox surrender flag, sold for $184,000 at a firearms auction held March 11-12 by James D. Julia Inc., in Fairfield, Maine. Also, a gold inlaid Parker A1 Special 16-gauge shotgun made $178,250; and the Dodge Winchester 86 and Savage 1899 brought a combined $477,250. Prices include a 15 percent buyer’s premium. 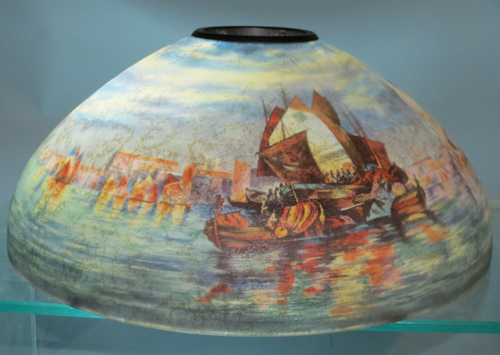 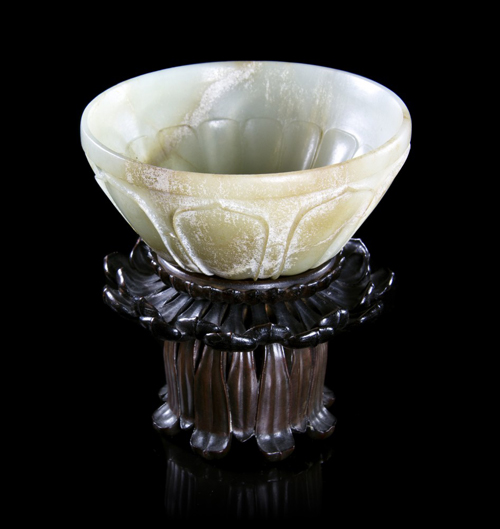 A carved jade lotus form bowl sold for $230,500 at an Asian works of art auction held March 24-26 by Leslie Hindman Auctioneers in Chicago. Also, a painting by Chinese artist Zhao Shao’ang went for $86,500. It had been purchased by the consignor at the artist’s studio in 1967. A pair of carved white jade quail boxes bearing imperial Qianlong marks hit $92,500; and a jade and wood hat stand carved with scrolling clouds surprised the audience early in the sale when it fetched $116,500. Prices include a 20 percent buyer’s premium. 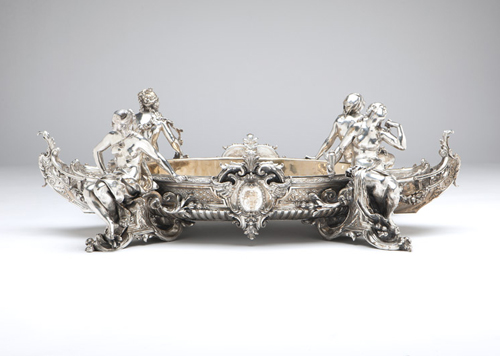 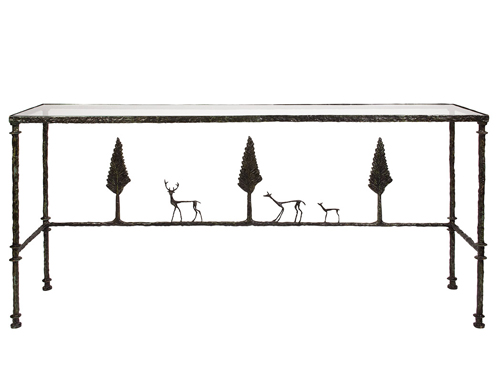 A bronze and glass console table by Diego Giacometti sold for $1.762 million at a Doyle + Design Auction held April 8 by Doyle New York in New York City. It was a new world auction record for a work by Giacometti. The circa 1975 console, titled Chevreuil, Biche et Bambi, is a one-of-a-kind piece that was commissioned from Giacometti by French fashion designer Serge Matta, the brother of surrealist painter Robert Matta. It depicts a bucolic scene of a stag, doe and fawn interspersed with pine trees. The price includes a 20 percent buyer’s premium. 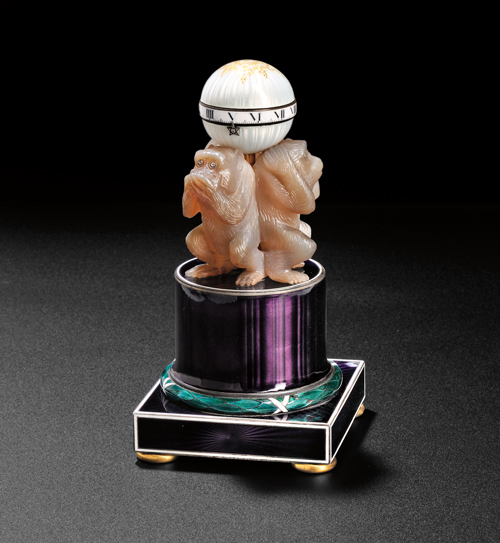 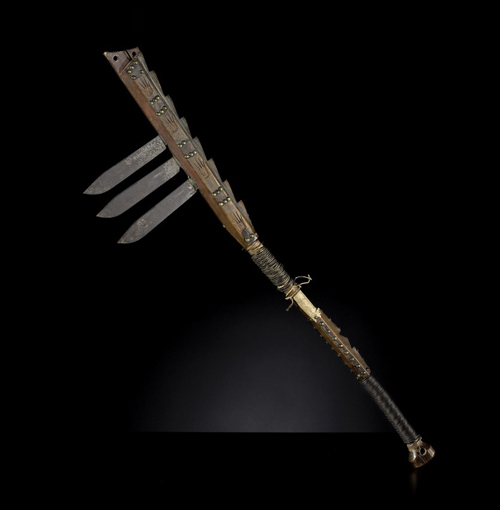 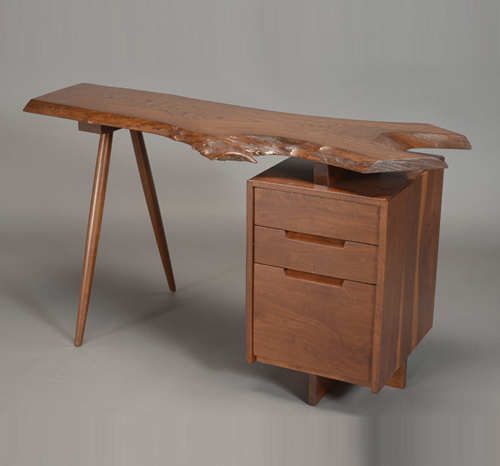 George Nakashima free-edge desk sold for $10,030 at a 20th century design auction held April 6 by Michaan’s Auctions in Alameda, Calif. Also, a large-scale, multicolored, handwoven abstract design tapestry, about 9 feet by 16 feet, coasted to $7,080; a pair of Nakashima grass-seat footstools realized $2,655 for the pair; a Nakashima free-edge side table brought $2,360; a massive bronze bell by Paolo Soleri commanded $2,360; and a pair of Peter Hvidt highboy dressers knocked down at $1,121 and $1,298. Prices include a 17 percent buyer’s premium. 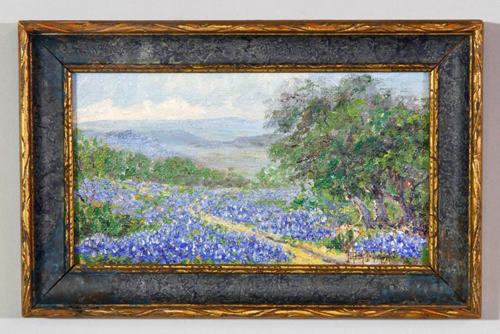 A miniature painting, 4 inches by 7 inches, of bluebonnets by Julian Onderdonk sold for $15,600 at a fine art and décor sale held March 9-10 by Kaminski Auctions in Beverly, Mass. Also, a river landscape attributed to the Hudson River School and signed Worthington Whittredge rose to $13,455; a portrait painted on KPM porcelain in the style of Joseph Coomans fetched $12,000; an early 19th century grandfather clock realized $11,115; and a pair of 15th or 16th century French Limoges candlesticks went for $7,650. Prices include a 17 percent buyer’s premium. 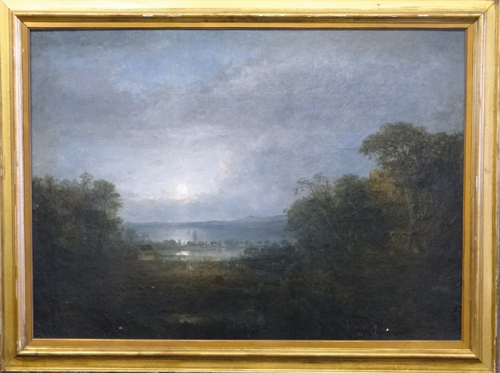 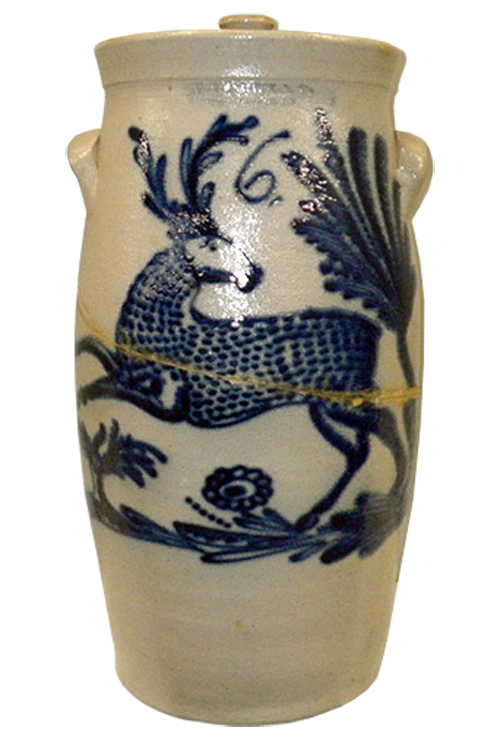 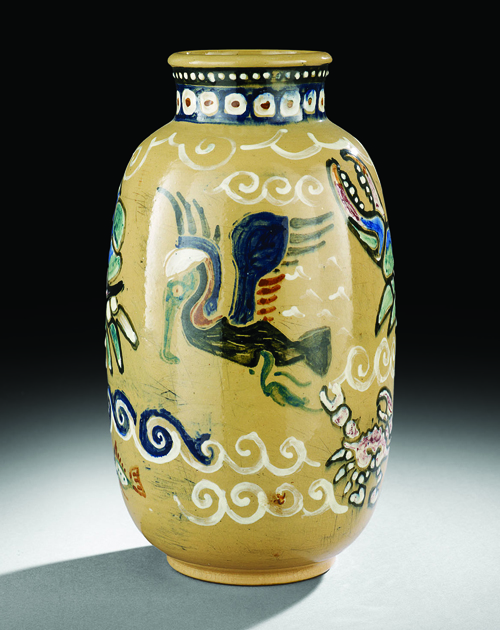 A large Shearwater Pottery vase decorated by Walter Anderson sold for $31,980 at an auction held April 19-21 by New Orleans Auction Galleries in New Orleans. Also, an oil on canvas by William Tolliver, titled Man in Blue, Playing a Guitar, made $23,370; Pedro Friedeberg’s giltwood hand chair went for $17,835; a 14K white gold and diamond necklace realized $20,910; and a book titled Sherwood Anderson and Other Famous Creoles, by William Faulkner and William Spratling, brought $16,605. Prices include a 23 percent buyer’s premium. 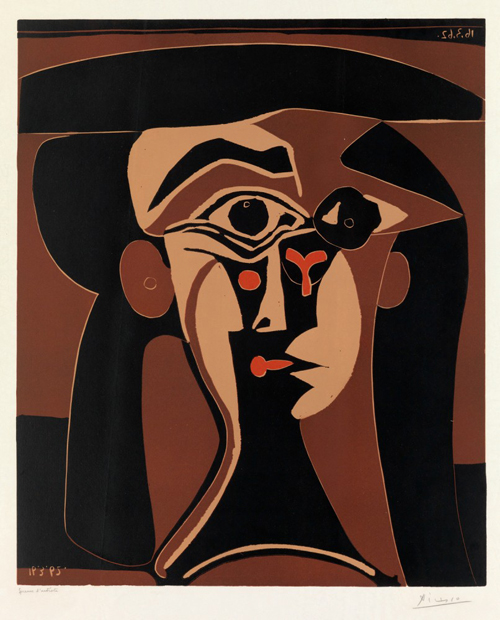 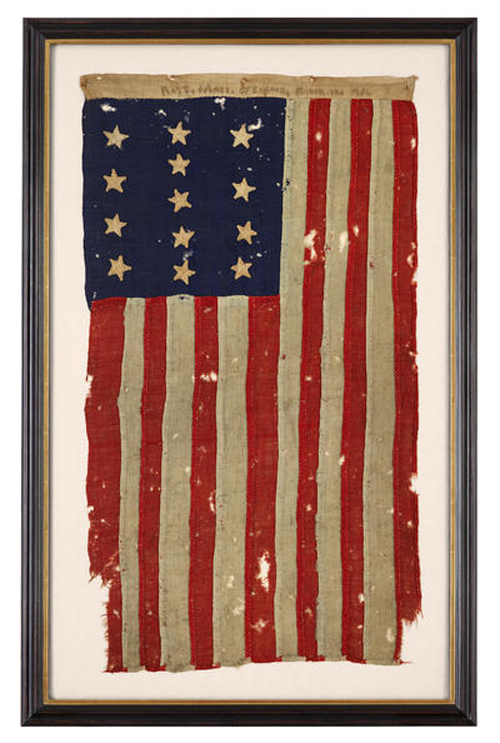 A rare, 18th century flag of the United States with just 13 stars sold for $212,500 at a sale of American furniture, folk art and decorative arts held April 18 by Freeman’s Auction in Philadelphia. The flag was made and used at a time when the nation was composed of just the original 13 states. It is believed to be the most ever paid for a flag of its kind at auction. It was also the third time in the last 18 months that a flag realized a record auction price at Freeman’s. Also, a 1904 St. Louis Olympics participation medal made $31,300. Prices include a 15 percent buyer’s premium. 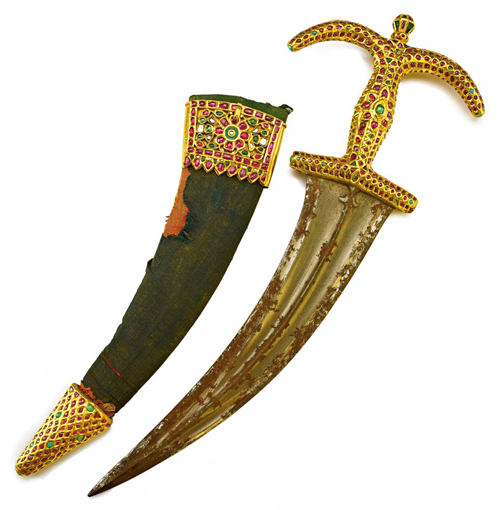 A jewel-encrusted Mughal dagger sold for $93,750 at an estates sale held in April by Rago Arts & Auction Center in Lambertville, N.J. Also, an abstract painting of figures by Walter Battiss went for $16,250; a Chinese porcelain screen topped out at $13,750; Tsar Nicholas I commemorative glasses coasted to $13,750; a Thai stone Buddha head from Angkor Province changed hands for $11,250; two self-portraits by Katharine Houghton brought $10,000; and two 19th century city engravings knocked down at $8,750. Prices include a 25 percent buyer’s premium. 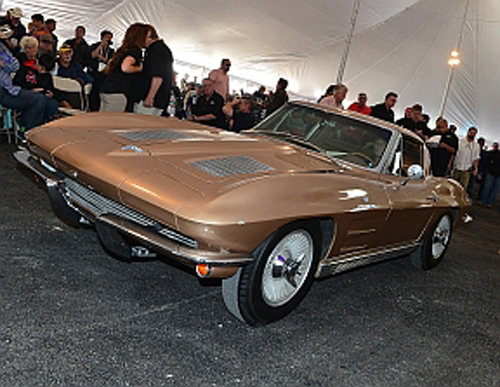