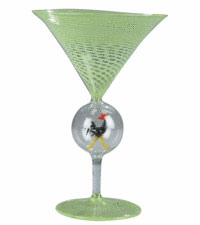 This champagne glass was sold by Garth’s Auctions in Delaware, Ohio, for $40. It may be by a relatively unknown glassworks in Vienna in the 1920s or it may be by a similar, less important and newer company.

Educated collectors find bargains. The more you know, the more likely you are to find a sleeper at a house sale or auction. And it is also important to handle a piece to judge weight, texture and quality. Recently a group of five blown-glass champagne glasses were offered at auction. Each glass had a transparent “globe” on the stem with a tiny colored glass bird inside. The bowl and base of the glasses had lines of color swirled in the glass. They were in the style of Bimini glass, a relatively unknown but expensive collectible glass. Fritz Lampl (1892-1955) made hand-blown glassware, often with tiny lampwork figures, at his workshop in Vienna in 1923. Lampwork is a special way of sculpting thin rods of glass heated over an open flame. It’s a method often used by today’s artists to make beads. In Vienna the Bimini factory made glasses, cocktail sticks, figures (especially ballerinas), lamps and vases. The glass was marked with paper labels. In 1938 Lampl moved to London and started the Orplid workshop that specialized in glass buttons. The company was out of business before Lampl died in 1955. Others copied his style and made similar glasses, decanters, perfume bottles, swizzle sticks and tiny animals. An expert who handles glass can tell the difference. It would be difficult to be sure in an online auction. Glass objects by Bimini are very lightweight. The shape and posture of the figures are accurate but lack details. Swirled green lines and birds are both found in glasses by Bimini and imitators. The auctioned champagnes identified only as Art Deco, not Bimini, sold for $40 each. The glass price guides show similar Bimini glasses with birds at $300 each. Were they an unrecognized bargain or were they just attractive glasses? Careful examination by a glass expert will tell.

Q: My mother had a Hoosier-style cabinet in our kitchen for as long as I can remember. The small clock set in the top of it still runs, and the rolltop works, too. The finish on the whole cabinet is white enamel. What can you tell me about it?

A: An Indiana man named J.S. McQuinn is credited with inventing a freestanding kitchen cabinet with bins for dry ingredients like flour and sugar, a tin work surface (later changed to porcelain enamel), and lots of drawers and cabinets for pots, pans, bowls, dishes and utensils. McQuinn founded the Hoosier Manufacturing Co. in Albany, Ind., in 1899, then moved it to New Castle, Ind., after a fire. Many other manufacturers, most of them in Indiana, produced similar cabinets. They have all become generically known as Hoosier cabinets. Look inside the drawers and doors on your cabinet to see if you can find a manufacturer’s name. Even if you can’t, your cabinet could be valuable. Its price is determined by what it’s made of and its size and condition. Many sell for $500 to $1,500. By that early 1940s, built-in kitchen cabinets had replaced Hoosier cabinets.

Q: I want to know about an object I found in my parents’ home that looks like a small ax. One side pictures a woman’s face and is embossed “1901 Cut Out the Whiskey” and “Ax of All Nations.” The other side says “Buy Laurel Stoves & Ranges” and “Art Stove Co., Detroit, Mich.”

A: You have an interesting advertising piece that is also a prohibition item. The face on your ax is that of Carrie Nation, who was active in the temperance movement in the early 1900s. She was arrested in Kansas City, Mo., in 1901 after she used an ax to smash the liquor in several saloons. She was fined and banned from the city. She died in 1911, eight years before the 18th Amendment was passed banning the manufacture, sale or transportation of intoxicating liquor. A prohibition ax like yours sold for $29 at a recent auction.

Q: I’m looking for information on two Goldscheider figurines I own. They are marked “Goldscheider Everlast Corporation – fine china U.S.A.”

A: Friedrich Goldscheider founded his factory in Vienna in 1885. The family left Vienna in 1938 and the Germans took over control of the factory. Goldscheider started factories in England and in Trenton, N.J. The name of the New Jersey factory was Goldscheider-Everlast Corp. from 1941 to 1947, so your figurines were made during those years. The company is still in business. The New Jersey business, called Goldscheider of Vienna, imports all of the pieces made at the Vienna plant, which was returned to Mr. Goldscheider in 1950.

Q: I have a vase marked “Royal Bayreuth.” The mark includes two lions holding shields with the letters “P” and “T” in them. Underneath is a banner that says “PRIV. 1794.” Does this mean my vase was made in 1794?

A: No, 1794 is the founding date of the Royal Bayreuth factory of Tettau, Bavaria, Germany. The mark on your vase was used by Royal Bayreuth after 1900. The “P” and “T” stand for Porzellanfabrik Tettau; “Priv.” is an abbreviation for “privilegierte.” The current name of the factory is Koniglich Privilegierte Porzellanfabrik Tettau (Royally Privileged Porcelain Factory).

Tip: Check the claw settings on any antique jewelry to be sure the prongs are not worn or loose. It is cheaper to be careful than to replace lost stones.

Terry Kovel answers as many questions as possible through the column. By sending a letter with a question, you give full permission for use in the column or any other Kovel forum. Names and addresses will not be published. We cannot guarantee the return of any photograph, but if a stamped envelope is included, we will try. The volume of mail makes personal answers or appraisals impossible. Write to Kovels, Auction Central News, King Features Syndicate, 300 W. 57th St., New York, NY 10019.

Need more information about collectibles? It can be found on Kovels.com. Check prices. More than 700,000 are listed and viewing them is free. Read the weekly Kovels Komments. It includes the latest news, tips and questions and is delivered by e-mail, free, if you register. Kovels.com offers extra collector’s information and lists of publications, clubs, appraisers, auction houses, people who sell parts or repair antiques and much more. You can subscribe to Kovels on Antiques and Collectibles, our monthly newsletter filled with prices, facts and color photos.