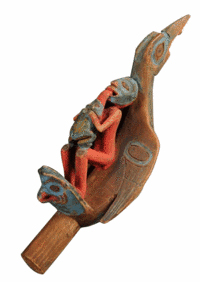 This raven rattle was made by Northwest Coast Indians in the 19th century. The carved and painted wooden rattle is 10 3/4 inches long. It sold for $9,480 at Skinner in Boston.

A recent auction sold a 19th-century carved and painted wooden “raven rattle” made by Northwest Coast Indians. Its shape is very unusual. Ceremonial rattles like this one tell a story and are valued pieces from the past. The main part of the rattle is shaped like a bird. An Indian with a painted face or a mask is crouching on the bird’s back while holding a froglike figure. The Indian’s feet are resting on a mask. The rattle represents the Indian legend of the raven that stole daylight from heaven and took it to the dark world. The man on the pipe represents a shaman initiate who is able to work with the spirit world as well as the visible world. He holds a frog and draws knowledge from the animal world through the frog’s long red tongue. The mask the shaman has at his feet represents the life supported by the sea that adds to the life of man. The rattle makes noise when you shake it. An elaborate rattle with carvings usually belonged to a high-ranking member of the tribe. The 19th-century rattle sold at a Skinner auction in Boston for $9,480.

A: John Lane bought a box plant in Altavista, Va., in 1912. His son, Ed Hudson Lane, soon began making cedar chests in the factory. The business was incorporated as Standard Red Cedar Chest Co. During World War I, the factory was converted to wartime production and made ammunition boxes. In 1922, the name of the company was changed to The Lane Co. The Lane family continued to operate the business until 1986, when Interco took over the company. Lane is now part of Furniture Brands International. The serial number indicates that your chest was made on Nov. 23, 1931. There is a recall on locks on Lane chests made before 1987. The lock on your cedar chest should be replaced because a child could get trapped inside and suffocate. Contact the company via its Web site, www.LaneFurniture.com, and you will be sent a free replacement lock.

Q: I have a small Little Red Riding Hood cookie jar that’s about 8 inches high. It has floral decals on it, but there are no factory marks. Since it is so small, what was it used for? Can you tell me how old it is?

A: Your jar is a cracker jar, not a cookie jar. The well-known Little Red Riding Hood design was patented by Louise Bauer of Zanesville, Ohio, in 1943. Pieces were made by A.E. Hull Co. of Crooksville, Ohio, and decorated by Royal China and Novelty Co., a division of Regal China of Antioch, Ill. Several different cookie jars were made, as well as other types of jars, pitchers, dishes and other items. The only pieces designed by Bauer herself were the cookie jar and large and small salt and pepper shakers. Little Red Riding Hood pattern pieces were made from 1943 to 1957. Reproductions have been made since then. Your cracker jar with decal decorations is worth a surprisingly high $750 to $825. An all-white version with gold trim is rare.

Q: I have a small commemorative medal that’s shaped like an American Indian arrowhead. It’s embossed with an Indian’s head, the year 1913 and “Homeopathic Medical Society of the State of N.Y.” The medal was made by Whitehead & Hoag. Can you figure out why this was made and what it’s worth?

A: Whitehead & Hoag was in business in Newark, N.J., from 1880 to 1955. It made campaign buttons, commemorative medals and other novelties. Your medal was probably made for a 1913 convention of the Homeopathic Medical Society of New York. The society, a professional organization, was founded in 1862 and is still in existence. You can go online and find medical doctors and doctors of osteopathic medicine who also practice homeopathic medicine. Homeopathy involves using special medicines to mirror the illness that’s being treated — thereby stimulating recovery. Your medal could sell for $10 to $50, but it may be hard to find buyers interested in homeopathic collectibles.

Q: I have a factory-sealed box of Roy Rogers Happy Trails Chocolate, Peanut Butter & Trail Mix. The cover is in color, with a photo of Roy in front of a desert background. There’s no date on the box, but the candy was made by Colt Inc. of Nashville, Tenn. Any value?

Tip: Remove stains from dishes with hydrogen peroxide or bicarbonate of soda, not with bleach, which was recommended years ago. Bleach can damage the finish.

Need more information about collectibles? Find it at Kovels.com, our Web site for collectors. Check prices there, too. More than 700,000 are listed, and viewing them is free. You can also sign up to read our weekly Kovels Komments. It includes the latest news, tips and questions and is delivered by e-mail, free, if you register. Kovels.com offers extra collector’s information and lists of publications, clubs, appraisers, auction houses, people who sell parts or repair antiques and much more. You can subscribe to Kovels on Antiques and Collectibles, our monthly newsletter filled with prices, facts and color photos. Kovels.com adds to the information in our newspaper column and helps you find useful sources needed by collectors.

A special report from Kovels: Numbers You Need to Know. We have put together a handy report filled with lists of numbers, dates, facts and clues to the age of your antiques and collectibles. Included are English Registry Marks on dishes, a U.S. patent design and trademark date identifier, U.S., English and Canadian patent numbers, inflation value chart, furniture periods, government labeling regulations that indicate age, silver price chart, dinnerware shapes and sizes, famous firsts and lots and lots of other dating clues. The 36-page report is available only from Kovels. Order by phone at 800-571-1555; online at Kovels.com; or send $25 plus $4.95 postage and handling to Kovels, Box 22900, Beachwood, OH 44122.