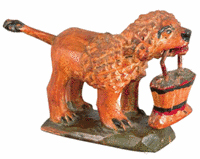 In the 1950s, America’s best-known folk-art wood-carver was Wilhelm Schimmel of Cumberland Valley, Pa. A carved eagle by this man was the dream of many a collector. His pieces, even then, went for thousands of dollars, and of course each was one of a kind. Schimmel (1817-1890) was born in Germany and immigrated to Pennsylvania after the Civil War. He worked for neighboring families and took care of their children in exchange for food and shelter. He also traveled in the area, staying overnight in jails or poorhouses. He carved birds and animals that he sold or traded for supplies and evidently a lot of liquor. Local bars wound up with many of his painted carvings. Most of the animals he carved were made from pieces of pine taken from local woodworking shops and sawmills. He carved the wood, covered the carving with plaster, then painted or varnished it. Most figures, particularly his eagles, had deep-cut crosshatching as part of the surface decoration. Schimmel was best-known for carved eagles, but he also made roosters, parrots, lions and dogs. His carvings now sell not just for thousands of dollars, but into the tens and hundreds of thousands.

Q: A friend gave me an old four-poster bed with a paper manufacturer’s label on it that says “Van Stee Corp.” I was told the bed is from the 1920s. It’s in fair to good condition and appears to be made of cherry.

A: Van Stee Corp. is still in business in Jamestown, N.Y. Although it traces its history back to 1906, its name didn’t become Van Stee Corp. until 1930. So your bed wasn’t made in the 1920s. By the 1950s, the company was the largest manufacturer of beds and headboards in the country.

Q: I’m curious about a metal top hat I found that appears to be quite old. It’s 10 inches high with a built-in 3-inch hook at the top. The hat is painted black with “Hat for Sale” painted on the front in white and red letters. It’s well made, so I’m presuming it was made at a factory. Does it have value to a collector?

A: It could have value to a hat collector – and to someone who buys store antiques. Your metal hat probably hung outside the door of a haberdashery or men’s millinery store. A hat similar to yours sold a few years ago for close to $1,300.

Q: I know old stoneware crocks are popular, but I’ve never seen one like mine. It’s marked “E.H. Merrill & Co., Akron, O.” Have you ever heard of this maker?

A: Hundreds of stoneware companies were operating across the United States during the 19th and early 20th centuries. Edwin H. Merrill immigrated to northeastern Ohio from England in the 1820s and started making stoneware jugs and crocks in Mogadore, Ohio, in the 1830s. He moved to Akron in 1847 and continued making stoneware, first with Calvin Merrill, then with Henry Merrill. Edwin and Henry were in business together under the name Akron Pottery Co. from 1861 to 1888. The company’s name changed in 1888 to E.H. Merrill & Co. So your crock was made after 1888 but before 1900, when Merrill was sold and became the Robinson Clay Products Co.

Q: My garage-sale buy this week was a set of solid-colored dishes marked with a circle surrounding the words “Pacific, Made in Calif., U.S.A.” Since I live in New England, I thought maybe I got a bargain because many people here don’t know as much about the value of California pottery. I figured it was worth as much as Fiesta, but I paid a lot less than the prices people around here charge for Fiesta.

A: Pacific Pottery was a descendant of an 1886 Los Angeles company called Southern California Coal & Clay Co., which made sewer pipes. Southern California Coal and Clay merged with some other potteries, and by the mid-1920s it was called Pacific Clay Products. Sewer pipes, bricks and roof tiles were its major products, but the firm also made stoneware, yellowware and other utilitarian items, including poultry feeders and dog dishes. In the 1930s, when the Great Depression hit, the construction business was down and so was the market for sewer pipes and other building products. Solid-color dinnerware was becoming popular, so Pacific Pottery, a division of Pacific Clay Products, introduced Hostess Ware, “an inexpensive, cheerful, solid-color dinnerware.” It was very durable and could be used for baking and serving. More than 200 different pieces were made in seven colors, and more colors were added later. Added decorations came later still, and by the 1940s, pastel colors had been added. Hostess Ware was advertised in national magazines and sold in department stores. Almost all pieces are marked. During World War II, Pacific switched to wartime production of porcelain used in radios and never went back to making dinnerware. Today Hostess Ware prices are higher than Fiesta for rarities but lower for place settings.

Tip: Smoking is bad for the health of your antiques. Smoke causes discoloration and weakens textiles. Another reason to stop smoking.

Need more information about collectibles? Find it at Kovels.com, our Web site for collectors. Check prices there, too. More than 700,000 are listed, and viewing them is free. You can also sign up to read our weekly Kovels Komments. It includes the latest news, tips and questions, and is delivered by e-mail, free, if you register. Kovels.com offers collectors lots of helpful information plus lists of publications, clubs, appraisers, auction houses, people who sell parts or repair antiques and much more. You can also subscribe to “Kovels on Antiques and Collectibles,” our monthly newsletter filled with prices, facts and color photos. Kovels.com is written to add to the information in our newspaper column and to help you find useful sources needed by collectors.

Kovels’ New Dictionary of Marks: Pottery and Porcelain, 1850 to the Present pictures more than 3,500 marks found on 19th- and 20th-century American, European and Asian pottery and porcelain. It includes factory dates, locations and other information. Marks are sorted by shape. Special section on date-letter codes and factory “family trees.” Available at your bookstore; online at Kovels.com; by phone at 800-571-1555; or send $19 plus $4.95 postage to Kovels, Box 22900, Beachwood, OH 44122.