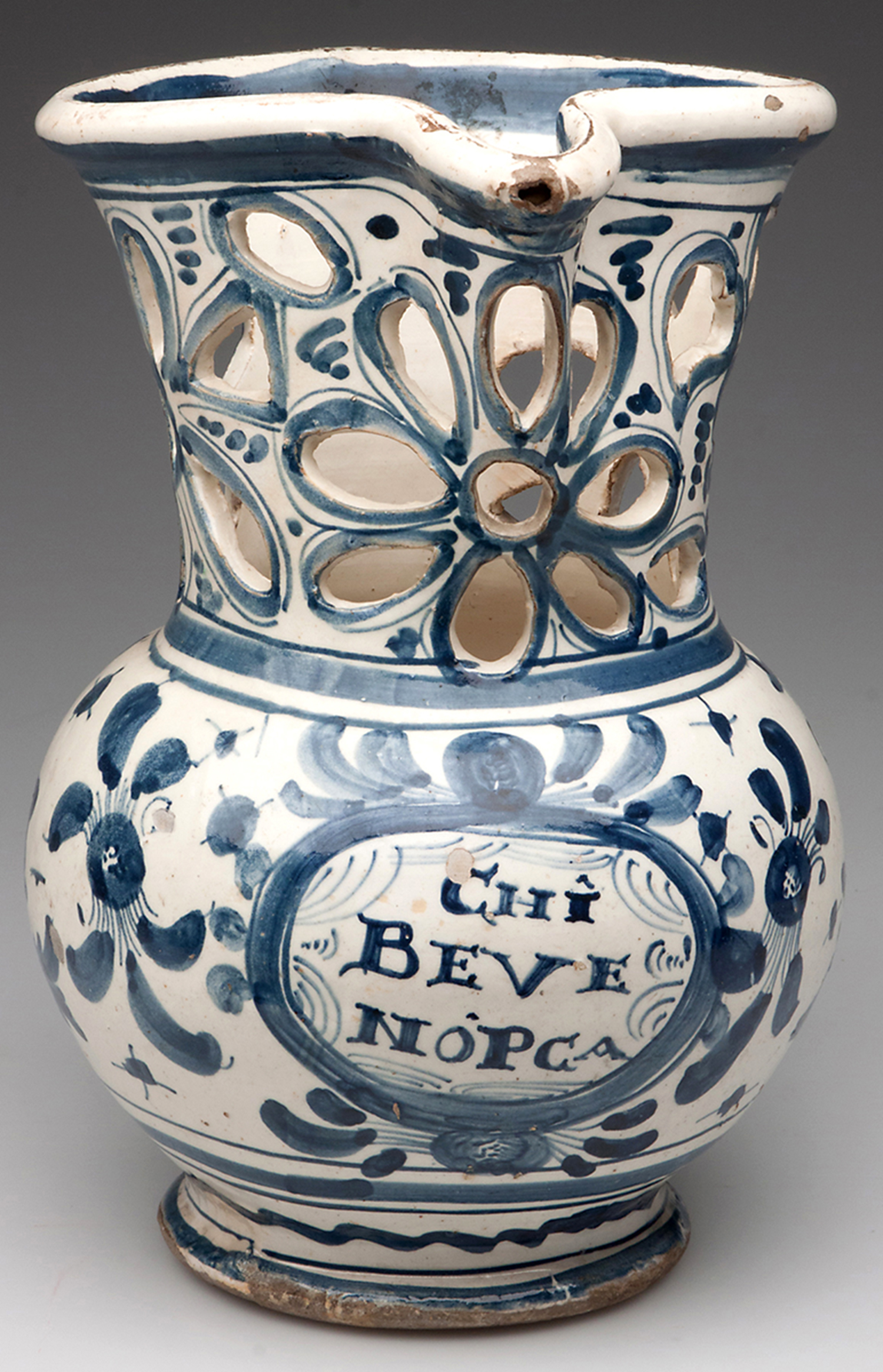 BEACHWOOD, Ohio — Practical jokes are not a new idea. Puzzle jugs that trick bar patrons can be traced back to the 15th century or even earlier. By the middle of the 17th century, puzzle jugs large enough to hold about two cups of beer were made by many pottery companies in England. Almost all had decorations related to drinking, plus unusual cut-out designs and a rounded rim with protruding spouts. There often was a poem that encouraged a bet with a drinker to test if he could drink without spilling. The idea persists. George Ohr, the early 1900s pottery genius from Biloxi, Mississippi, made small puzzle mugs that held just one cup of beer. Early puzzle jugs from Liverpool, Leeds, Bristol and Doulton, as well as 19th century jugs from Cambrian Pottery, Swansea, Sunderland, Ridgway and others, all relied on the same puzzle. Of course the pierced holes made it impossible to tip the jug without spilling liquid, but to win the wager, you had to drink the contents of the jug. It was a simple trick. The rounded rim had one hollow spout that was used as a straw to suck the drink thru the hollow handle. It led to the inside and the contents of the jug. Smart bar patrons should not have been fooled twice. Today, there are copies of early jugs that sell for $75 to $150 and antique examples that are $150 to over $1,000.

Q: My husband and I bought a hexagonal “occasional” table at an Atlanta flea market about 40 years ago. The top is about 30 inches across. It has a lower caned shelf and turned legs with carved stretchers. A metal tag underneath says “H. Pander & Zonen, Den Haag, Amsterdam, Rotterdam.” The table is in good condition with original finish. We’d like to sell it. Any idea of its history?

A: The Pander family was in business in the Netherlands for over 100 years. In 1855, Klaas Pander started making rush mats for fisherman. His son, Hendrik, opened a furniture workshop, with model rooms displaying furniture, in 1887. It became H. Pander & Zonen (H. Pander & Sons) and eventually was one of the largest furniture companies in the country. H. Pander & Sons bought an airplane-manufacturing company in 1924 and made small planes, as well as furniture, until 1934. The company had offices or factories in The Hague, Amsterdam, and Rotterdam. It went out of business in 1985.

Q: I have a Gone With the Wind lamp that has a red puffy glass globe. It’s covered with years of grime. Can I put the shade in the dishwasher to wash it?

A: Never wash old glass in the dishwasher. Glass will sometimes crack from the heat. Dishwasher detergents are too harsh for old glassware. You can wipe off the dirt with a damp cloth or wash the globe in warm, soapy water. Use a mild detergent and line the sink with a towel. Dip the globe in soapy water, rinse, and air dry.

Q: My scale was in an upstairs room in my grandparents’ old farm house as far back as I can remember. I have the original envelope with instructions on how to use it. The directions say it’s a 10-ton capacity wagon scale. There is a date of “11-10-41” in one corner. Do you have any information about this scale and what it’s worth?

A: Thaddeus and Erastus Fairbanks, two brothers, founded The E. & T. Fairbanks Co. in St. Johnsbury, Vermont, in 1824. Thaddeus Fairbanks invented the platform scale and held several patents for weighing scales. By the late 1800s, Fairbanks scales were sold worldwide. Today the company, called Fairbanks Scales, sells a wide variety of scales. It has corporate offices in Kansas City, Missouri. There are a limited number of buyers of old wagon scales. It probably would have to be sold at a farm auction.

Q: I have a white cup and saucer marked “Pyroceram Brand Tableware By Corning.” What is Pyroceram?

A: Pyroceram was developed at Corning in the 1950s. The process was discovered by accident in 1952, when a piece of glass was overheated and turned into a white glass-ceramic material that was break-resistant. The material originally was used on rocket nose cones because it was transparent to radar. It was used to make CorningWare cookware beginning in 1958. The cookware was resistant to sudden extreme temperatures and could go directly from freezer to stovetop to table. Millions of pieces of the cookware and restaurant ware were made. Your cup and saucer are part of the line made for restaurants. Original Pyroceram was not made after the late 1990s. World Kitchen bought Corning’s consumer products division in 1998 and began making CorningWare in 2001. The original Pyroceram material was brought back in 2009. Four Pyroceram cups and saucers sold online for $12 and a cereal bowl sold for $7

Tip: Always carry a slab of marble with the thin edge up. The weight of the piece, if carried the wrong way, could crack the marble.

The Kovels have navigated flea markets for decades. Learn from the best. “Kovels Flea Market Strategies: How to Shop, Buy and Bargain the 21st Century Way” by Terry Kovel and Kim Kovel tells you about the latest smartphone apps and websites to help you shop, share, and ship as well as what to wear, what to bring, and, most important, how to negotiate your way to a bargain. Also, tips on spotting fakes, advice about paying for your purchases and shipping suggestions. Full color booklet, 17 pages, 8 1/2 by 5 1/2 in. Available only from Kovels for $7.95 plus $4.95 postage and handling. Order by phone at 800-303-1996; online at Kovels.com; or mail to Kovels, Box 22900, Beachwood, OH 44122.

Furniture Specific: Hers, His or Whose? Provenance
Scroll to top