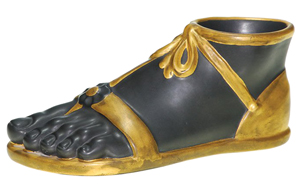 Piero Fornasetti (1913-1988) created this life-size bronze foot to be used as an ornament. It sold for $393 at Humler & Nolan, an auction gallery in Cincinnati.

BEACHWOOD, Ohio – A realistic replica of a full-size foot in a sandal seems like a strange choice of ornament for the average home. But feet and shoes have been popular ornaments for centuries.

The foot of an ancient black man wearing a two-strap gold sandal was made by the modern artist Piero Fornasetti to be placed on a table in a modern house. The 3 1/2-by-9-inch foot is life-size. A 19th-century bronze candleholder was made in the shape of a foot in a sandal with an extended large toe topped by a cup to hold a candle. One 20th-century advertisement for a foot powder was a plaster replica of an oversized bare foot. A wooden bare foot, a little smaller than life-size, was carved by a 1920s folk artist as a gift for his podiatrist; it was to be used as a paperweight. A sleek modern bronze bare foot paired with a bronze hand was made by a 1970s Danish artist.

Victorians seem to have preferred feet wearing shoes as ornaments. Some shoes were padded to be pincushions, and pressed glass shoes with no special use are easy to find at antiques shows. A podiatrist we know has a famous collection of shoe-shaped objects in his office—more than 100 items.

Collecting by shape is just one way to organize a hobby. Most popular are cats, dogs, lady’s heads, angels, buildings and, of course, hands and feet.

Q: We have four Hitchcock-style chairs made by the Boling Chair Co. of Siler City, N.C. We have been unable to find any information about this company. Can you help?

A: Boling Chair Co. started out in 1901 as Siler City Bending Co. One of the company’s founders, Mal Boling, rounded up new investors in 1904 and reorganized the company as High Point Bending and Chair Co. It made bentwood parts for other companies before producing its own bentwood furniture. It later expanded its furniture lines. The company’s name became Boling Chair Co. in 1956 or ’57, and then Boling Co. in 1979. Today it’s based in Mount Olive, N.C., and is called Boling Furniture Co. If your chairs are marked “Boling Chair Co.,” they were made between 1956 and 1979. Chairs like it sell online for about $50 apiece.

Q: I have a solid-brass Batman belt buckle I think is from the 1940s. It’s marked “National Periodical Publications, Inc.” and has the number 0016 on the back. Can you tell me what year it was made?

A: Your Batman belt buckle was made in the early 1940s. National Periodical Publications published the first comic books that included original material, not reprints of comic strips. The company started out in 1934 as National Allied Publications. It has operated under various names, including Detective Comics and DC Comics. The company published the first Batman comic in 1939. Your Batman belt buckle probably is worth less than $100.

Q: I have an antique grip machine that was used in my grandparents’ tavern a century ago. The machine is red metal and works with a penny. It was manufactured by D. Gottlieb & Co. of Chicago. A bell rings when you get the meter so high. There is a chart on the front that has different ages and grip numbers for men and women. How much is it worth?

A: Your grip machine is not quite as old as you think. D. Gottlieb & Co. was founded by David Gottlieb in 1927. Originally the company made pinball machines. Gottlieb’s countertop grip tester was first made in 1928. The machine tested grip and arm strength and was a moneymaker for stores, taverns, barbershops and other retail businesses. Keys were needed to open up the back and get the money out. The grip tester was in and out of production until at least the late 1940s. Gottlieb made hundreds of different games. A couple of years ago, a D. Gottlieb & Co. grip tester with keys sold for $480.

Q: Several years ago, I received a six-piece set of little antique crystal bowls and matching tiny shovels. The set probably dates from the late 19th or early 20th century. Each little bowl is about 2 inches tall and 4 inches in diameter. What were the bowls and shovels used for? And what is the set worth?

A: Your little bowls were used to hold salt. They’re called “open salts,” “standing salts” or “salt cellars.” An open salt with a shovel-like spoon and a little pepper shaker were set next to each place-setting at the dining table. Instead of shaking salt, diners used the shovel to sprinkle salt on their food. Sets like yours don’t sell for high prices today. We have seen six-piece sets sell online for $25 to $50.

Q: Years ago I donated many valuable toys and games to various charities. Is there any way to get these sentimental items back?

A: Once things are given away, you can’t get them back. Charities usually sell the items at resale shops and use the money to support their programs. Toys in good condition also may have been distributed to children in need. You could have taken a tax deduction for the value of the toys at the time you donated them, but now you can be happy that your donation helped the charities you chose.

Tip: When repairing antique jewelry, never eliminate any marks or inscriptions. For example, when sizing a ring, keep the carat marks and hallmarks. If the shank can’t be cut, use a ring guard instead.

Take advantage of a free listing for your group to announce events or to find antique shows and other events. Go to Kovels.com/calendar to find and plan your antiquing trips.

Contemporary, modern and mid-century ceramics made since 1950 are among the hottest collectibles today. Our special report, “Kovels’ Buyers’ Guide to Modern Ceramics, Mid-Century to Contemporary” identifies important pottery by American and European makers. Includes more than 65 factories and 70 studio artists, each with a mark and dates. Works by major makers, including Claude Conover, Guido Gambone and Lucie Rie, as well as potteries like Gustavsberg, Metlox and Sascha Brastoff, are shown in color photos. Find the sleepers at house sales and flea markets. Special Report, 2010, 8 1/2 x 5 1/2 inches, 64 pages. Available only from Kovels. Order by phone at 800-303-1996; online at Kovels.com; or send $19.95 plus $4.95 postage and handling to Kovels, P.O. Box 22900, Beachwood, OH 44122. 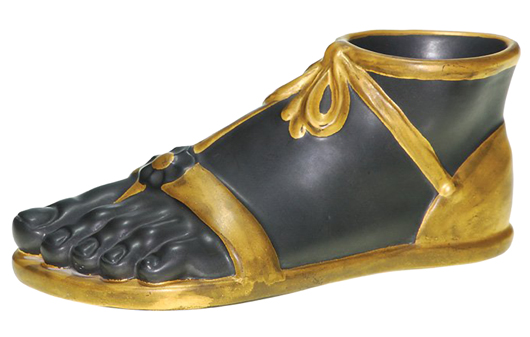 Piero Fornasetti (1913-1988) created this life-size bronze foot to be used as an ornament. It sold for $393 at Humler & Nolan, an auction gallery in Cincinnati.

Beauty of Japanese calligraphy at Metropolitan Museum of Art