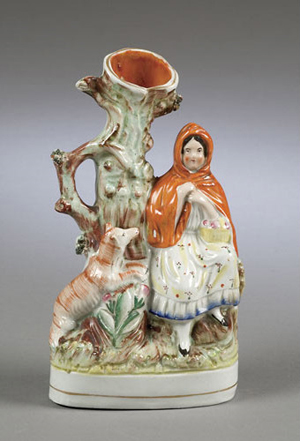 Little Red Riding Hood is standing near a vase meant to hold ‘spills’ (thin wooden sticks or rolled paper) used to transfer a flame from a fireplace or stove to a candle or lamp. The 10 1/2-inch-high figure made in the Staffordshire district of England in about 1850 sold for $110 at Cowan’s Auctions in Cincinnati.

Folk tales like Little Red Riding Hood have been part of everyone’s childhood since the 14th century. The stories taught lessons. Red Riding Hood originally was the story of a young girl going into dark woods filled with dangers. In these early tales, the girl met an ogre or a werewolf who eats the grandmother and lures the girl into bed. But she escapes using her wits—no huntsman was there to save her. By the 17th century, the many versions of the story told of a young country girl meeting a wolf and telling him about her grandmother’s house. The wolf is then able to eat Grandma and the girl. The tale reminds young girls of the dangers of following the advice of strangers. Through the years, the story became a morality tale warning about strange men. But by the 1800s, the story had Grandma and Red Riding Hood outwitting the fox and being saved by a hunter. Still later, the tale represented the views of Freud and feminists. Today the tale is often reworked as satire or comedy. Through all the years, pictures and figurines depicting Red Riding Hood have remained popular. In the 19th century, Staffordshire potters made dozens of figures of the girl with or without Grandma or the wolf. Try collecting things related to a single folk tale or nursery rhyme. Books, prints, fabrics, jewelry, dishes and even furniture can be found expressing both old and new versions of the stories.

Q: An aunt handed down a vanity that was made by Stickley Brothers between 1926 and 1928. There’s a sticker inside the top drawer that says “Quaint Furniture of Character.” What can you tell me about the vanity and its value?

A: Quaint Furniture was one of the lines made by Stickley Brothers Co. of Grand Rapids, Mich. The company was founded in 1891 by John George and Albert Stickley. Their Quaint Line of furniture was introduced in 1902. Quaint Mission was made first. Other Quaint lines included Quaint Arts & Crafts (1904), Quaint Tudor (1914), Quaint Manor (1914), Quaint American (1920s) and Quaint Colonial (1920s). John George left the firm in 1902 and Albert retired in 1927. The company remained in business until about 1947. Your vanity in good condition is worth about $300.

Q: I have two 1936 booklets titled Kellogg’s Singing Lady Party Kit published by the Kellogg Co. I understand The Singing Lady was an NBC radio show. The books come with pop-out invitations, games, place cards, favors, masks, verses, recipes and cake decorations. Are they worth much?

Q: I recently bought a box full of stuff at a garage sale. In the box I found a Beatles souvenir spoon. The heads of the four Beatles are pictured on the insert at the top of the spoon handle. The spoon is 4 1/4 inches long. What is it worth?

A: Your stainless-steel spoon is one of a set of five. The other four picture each Beatle individually. A set recently auctioned online for $90, but an individual spoon like yours sold for just $6.50.

Q: I have four small plates, about 4 1/2 inches in diameter, each decorated with a picture of a Greek god. The plates are white with gold-leaf trim. The backs are stamped “Mitologia” over a picture of a hand holding a paintbrush. Below that it says, “Fornasette-Milano, Made in Italy, Exclusive for Bonwit Teller.” Are they old or valuable?

A: Your small plates or coasters were designed in the 1960s by Piero Fornasetti for Bonwit Teller, a high-end New York department store. The complete set included eight different designs of mythological figures. Fornasetti (1913-1988) made several other coaster sets with different themes for Bonwit Teller. The department store was founded in New York City in 1895 and eventually opened branches in several other cities. After the chain declared bankruptcy in 1989, most of the stores closed. The name was sold and attempts have been made to revive the famous brand. Fornasetti was a painter, sculptor and designer who lived in Milan, Italy. His furniture and other products are popular collectibles today. New Fornasetti pieces are being made today by Piero’s son, Barnaba, in both old and new designs. The value of a set of four coasters is about $50.

Tip: Don’t soak dishes in chlorine bleach to remove stains. Bleach damages the glaze. This treatment was recommended years ago. And never use other bathroom cleaners, either. They, too, ruin the glaze.