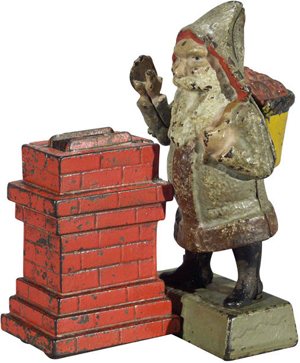 This clockwork toy showing Santa in a goat-drawn sleigh could be wound up to move. It is one of three known, and was auctioned for $161,000 by James D. Julia of Fairfield, Maine.

Santa Claus has changed in appearance throughout the centuries. He is now a mixture of the Dutch, German, Scandinavian, British and American characters that have represented Christmas.

The earliest Santa-like figure was Saint Nicholas of Myra, a fourth-century Greek bishop. He was pictured as a thin bishop in religious clothing. The bearded Norse god Odin also influenced the Santa Claus image by the 13th century. He led a hunting party in the sky while riding an eight-legged horse. The Dutch had St. Nicholas, or Sinterklaas, by the 16th century. He rode into town on a steamboat in November and carried a book that told which children were good and which were naughty. Then in December, the elderly tall man with white hair and beard and a long red cape rode a horse in the sky and delivered gifts through the chimney. Santa got shorter by the 1840s in Scandinavia. He was a bearded elf dressed in a gray outfit with a red hat.

The Scandinavians also have a tradition of the “Yule Goat,” that pulled a sleigh through the sky. It came from the story of Thor, a Norse god. The goat is now a life-size Christmas figure made of straw.

Father Christmas, known in 17th-century Britain, was a chubby, jolly, bearded man dressed in a green fur-lined robe. But in America, Santa Claus has been inspired by the figure described in the 1823 poem “The Night Before Christmas,” which describes St. Nick as plump and jolly but also as a small elf that could slide down a chimney. By 1863 Thomas Nast, a cartoonist, had pictured Santa as a large, heavy-set man with a beard.

Coca-Cola ads in the 1930s feature the Santa best known today, the jolly man with a beard and fur-trimmed red suit. All of the Santas gave gifts to children, and most could ride in the sky.

A rare tin Santa toy made in the 19th century sold recently for $161,000. It shows Santa in a sleigh drawn by goats. The first one found made experts wonder if it was all original—because goats, not reindeer, are pulling the sleigh. Two more of the clockwork toys are now known, however, proving that the expensive toy is original. Perhaps the maker was familiar with the tradition of the Yule Goat.

Q: Can you give me information about a rhinestone necklace and matching screw-on earrings that were given to me by a deceased friend born about 100 years ago? Each piece is marked with the copyright symbol and the name “Lisner.”

A: Your costume-jewelry pieces were marketed by D. Lisner & Co. of New York City. Founded by David Lisner in 1904, the company was strictly a wholesaler of imported European jewelry until the 1930s. During the ’30s, Lisner enlisted a partner to oversee the establishment of a retail business that depended on contracts with jewelry manufacturers in Providence, R.I. The “Lisner” mark was used starting in the 1930s, but any Lisner mark with the copyright symbol dates from after 1955. The company was sold and resold several times since 1979, and jewelry marked “Lisner” has not been made since 1985. Lisner necklace and earrings sets sell for $75 to $150 or even more, depending on style, colors, material and condition.

Q: I have a set of four winking Santa mugs from 1960 with an “H.H.” logo on the bottom. I’d like to know who made them and if they’re worth anything.

A: Your winking Santa mugs were made by Holt-Howard Co., an importing company that started working in New York City in 1949 and moved to Stamford, Conn., in 1955. The company sold candleholders, condiment jars, decanters, spoon holders, saltshakers and other table accessories. It was bought out by General Housewares Corp. in 1969. Holt-Howard pieces often are stamped in black with “Holt-Howard” or “HH” and the year of manufacture. The “HH” mark was used until 1974. Production of Holt-Howard pieces ceased in 1990. Your mugs, if in perfect condition, are worth $5-$6 each.

Q: I have an Edna Hibel 1985 Christmas plate called “The Angels’ Message.” It’s in perfect condition, but I don’t have the original box. I’d like to know the current value.

A: Edna Hibel’s 1985 Christmas plate was the first in a series of four Christmas plates by the artist. It originally sold for $45. The first in a series of limited edition plates usually sells for more than subsequent plates, and buyers who “discover” the series later try to find the first of the series to complete the set. Today you can find this plate listed online for prices ranging from $10 or less to more than $200, but the plate in a frame sold for less than $15 at auction this year.

Q: My wooden hobby horse was given to me for Christmas when I was a child in the mid 1940s. The horse’s body has two large springs that move the legs as a child scoots the horse along the floor. A wooden piece on the back of the horse says, “Bingo the Bronco (patented) from Tots Toys, Milwaukee 5, Wisconsin, U.S.A.” Can you tell me anything about the horse?

A: We found the patent for your horse. It was granted on July 27, 1943, to Jack F. Fleming of Milwaukee and was assigned to Walter A. Hartwig, also of Milwaukee. The patent number is 2,325,496. Another clue to your toy’s age is the “5” after “Milwaukee” on the label. One- and two-digit postal zones were introduced in 1943. It was marketed as “Bingo the Bronco” and as “Peppy the Pinto.” A Bingo horse like yours auctioned for $75 last year.

Tip: A dirty rag doll can be cleaned with a vacuum. Put a lingerie bag, held in place by a rubber band, on the nozzle of the vacuum cleaner. Then vacuum for a few minutes.

Sign up for our weekly email, “Kovels Komments.” It includes the latest news, tips and questions, and is free if you register on our website. Kovels.com has lists of publications, clubs, appraisers, auction houses, people who sell parts or repair antiques and more. Kovels.com adds to the information in this column and helps you find useful sources needed by collectors.

Give yourself or a friend a gift. Kovels’ Advertising Collectibles Price List has more than 10,000 current prices of your favorite advertising collectibles, from boxes and bins to trays and tins. More than 400 categories are organized by brand name, company name, product or collectible. Plus 300 photographs, logos and trademarks. A 16-page color insert features important advertising collectibles. Clubs, publications, resources and a full index. Available at your bookstore; online at Kovels.com; by phone at 800-303-1996; or send $16.95 plus $4.95 postage to Kovels, Box 22900, Beachwood, OH 44122.