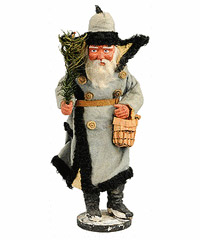 This 10-inch-tall Santa Claus wears a blue cloth coat and carries the traditional fir tree and a basket of goodies. The blue coat suggests he dates from before 1915. The figure was made in Germany, probably to be used as a candy container. Morphy Auctions sold Santa for $4,025 in 2010.

Santa Claus hasn’t always been a fat, jolly man with a beard and a red coat. He hasn’t even always lived at the North Pole. The Santa of today often is called the “Coca-Cola Santa” because he was first drawn in the 1930s for a series of Coke ads. Before that, a similar Santa had been drawn for magazine covers by N.C. Wyeth and Norman Rockwell. Even the name “Santa” isn’t very old. The child of the 19th century called the famous Christmas figure “Santa Claus” only after 1863, when Thomas Nast’s illustrations included the name and pictured him at the North Pole. Santa’s early suits were shown in many different colors, including blue. Earlier 19th-century Christmas figures were named “St. Nick” or “St. Nicholas” because of the poem The Night Before Christmas. He was then a plump elf, small enough to fit down a chimney. Why he had become so small is a mystery, because in the 18th century he was a tall saint dressed in a bishop’s coat. He had a long white beard and a staff. Early Dutch settlers in America added a round belly and a clay pipe. And all of these versions of Santa go back to the original saintly Bishop Nicholas of Myra, who lived in Greece in the third century. He was known for good deeds and for secretly putting coins into shoes left outside.

A: It’s likely that both dolls were on the market around the same time in the mid-1970s. Mattel may have introduced its 12-inch Baby Tenderlove “brother” doll a little earlier than Ideal sold the 14-inch Joey Stivic doll. Stivic is better-known because the baby was a character on the TV show “All in the Family.” Both dolls sell for about $50 today.

Q: I have a chair with the label “Stanley Furniture Co., Stanleytown, Virginia.” I would like to know the history of this company.

A: Stanley Furniture Co. was founded by Thomas Bahnson Stanley (1890-1970) in 1924. A factory and houses for workers were built on 150 acres of open land in an area that became known as Stanleytown. The company owned the houses and rented them to workers for a few dollars per month. The first Stanley furniture was a dining-room suite, produced in 1925. Your chair was made after 1929. During the Depression, the company promised that no one would be let go, and the workers and executives took pay cuts so the company could stay open. The company is still in business in Stanleytown. The founder became active in politics, and in 1953 Thomas Stanley was elected governor of Virginia.

Q: My mother left me a china plate that’s marked “Xmas 1916 with compliments from James Norris Ltd. Wine and spirit merchants, Burslem.” Can you tell me something about it?

A: James Norris Ltd. was the name of a bottling plant and brewery in Burslem, England, from at least the late 1800s into the 1930s. Its buildings were demolished in the 1950s. James Norris apparently contracted with local potteries to make Christmas gifts for his customers. Unless you can find a manufacturer’s mark on the plate, it’s impossible to tell which pottery made your plate. But at least you know that it dates from 1916.

Q: I collect Christmas dishes and glassware to use during the holidays. I have a Holly Amber cream pitcher and a Star Holly goblet on a stem. Who made them?

A: Holly Amber, also known as Golden Agate, was made for just six months by the Indiana Tumbler and Goblet Co. of Greentown, Ind. It is a shaded amber-colored pressed glass. It was reheated to create shading from amber to cream. The most popular of the patterns used on this secret recipe of amber glass was Holly Amber. It has a band of holly leaves as the decoration. The glassware was introduced in January 1903, but was discontinued when the factory burned down six months later. Star Holly is a glassware that looks like Wedgwood’s jasperware pottery. Pieces have a raised border of holly leaves, and plates also have a center medallion that looks like a star made of seven holly leaves. It was made in blue, green or rust with white leaves. The factory mark of the intertwined and raised letters “IG” is on the bottom. Star Holly was made for a short time in about 1951 by the Imperial Glass Co. of Bellaire, Ohio. A large collection of the glass was found in the 1950s by a new dealer who was told it was very old. For many years, the glass was listed as 19th-century American. That error has now been corrected in all but the old books.

Q: I have an old Christmas ornament that has been in the family for a long time. It is a glass clown with the number 500,000 printed on his chest. What does that mean?

A: You have an ornament from the days of German inflation after World War I; 500,000 was the number of marks it cost to buy a loaf of bread. There was actually a 500,000-mark bill. Why that was a Christmas message, we can’t imagine. It is a rare ornament, but be warned that reproductions have been made since 2000.

Tip: Never burn Christmas greens in a fireplace. The wood will send sparks up the chimney, and some evergreens burn so hot they could cause a fire in the flue or a buildup of creosote in the chimney.

Need more information about collectibles? Find it at Kovels.com, our website for collectors. Check prices there, too. More than 700,000 are listed, and viewing them is free. You can also sign up to read our weekly Kovels Komments. It includes the latest news, tips and questions and is delivered by e-mail, free, if you register. Kovels.com offers extra collector’s information and lists of publications, clubs, appraisers, auction houses, people who sell parts or repair antiques and much more. You can subscribe to Kovels on Antiques and Collectibles, our monthly newsletter filled with prices, facts and color photos. Kovels.com adds to the information in our newspaper column and helps you find useful sources needed by collectors.

New! Contemporary, modern and mid-century ceramics made since 1950 are among today’s hottest collectibles . Our special report, Kovels’ Buyers’ Guide to Modern Ceramics: Mid-Century to Contemporary identifies important pottery by American and European makers. Includes more than 65 factories and 70 studio artists, each with a mark and dates. You’ll find color photos of works by major makers, including Claude Conover, Guido Gambone and Lucie Rie, as well as potteries like Gustavsberg, Metlox and Sascha Brastoff. Find the “sleepers” at house sales and flea markets. Special report, 2010, 8 1/2 x 5 1/2 inches, 64 pages. Available only from Kovels. Order by phone at 800-303-1996; online at Kovels.com; or send $25 plus $4.95 postage and handling to Kovels, Box 22900, Beachwood, OH 44122.