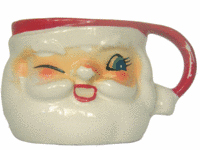 Holt-Howard made this punch cup in the 1960s as part of a set that included a bowl, ladle and eight mugs. The complete set sells for about $150-$200, but this mug alone costs only $7. Photo by Cloe Eiber.

Christmas for manufacturers to sell special holiday items. In 1949 John and Robert Howard and Grant Holt finished college and started Holt-Howard, a New York City business that sold Christmas items. Their first success was a revolving brass candelabrum called “Angel Abra.” The heat from burning candles makes a round metal propeller rotate to spin cutouts of angels. The idea dates back to the Middle Ages in Europe and similar candle carousels are still being made. At first Holt-Howard focused on Christmas items — candle holders, punch sets, dishes, planters, candy dishes and other ceramics featuring angels, pixies and Santa. The company moved to Connecticut in 1955 and started making kitchen-related items like condiment dishes, cheese jars and salt and pepper sets. Holt-Howard is credited with making the coffee mug a common household item; in the 1950s it made many different styles of mugs instead of traditional cups and saucers. The company’s ceramics were all made in the U.S.A. until the late 1950s, when manufacturing was transferred abroad and Holt-Howard became an importer. Collectors like the playful look of Holt-Howard designs and also the fact that each piece is marked with the company’s name and the date of manufacture.

Q: My father was once on board the USS Williamsburg presidential yacht. I still have the souvenir he received that day, a Ballantine Burton Ale bottle with a “Christmas Greeting” paper label that says “Brewed especially for Harry S. Truman on May 12, 1934. Bottled December 1949.” Would this be worth anything?

A: If the bottle is still full, it’s worth more than if it’s empty. Ballantine Burton Ale was a very special ale brewed and aged at one of Ballantine’s plants in Newark, N.J. It was never sold. Bottles were given as Christmas gifts to Ballantine distributors and VIPs, including President Truman. The USS Williamsburg had been used as a naval gunboat during World War II, but served as the presidential yacht from 1945 to 1954 so it was used by both President Truman and President Dwight Eisenhower. Full Ballantine Burton Ale bottles with the Truman label sell for more than $100. An empty bottle sells for less.

Q: Recently I bought an old Barbie doll at a house sale. Her face doesn’t look like the face on the doll I had as a child. Has Barbie had a facelift?

A: Barbie has had dozens of faces through the years. Different molds have been used. Molds have names like Christie, Lea, Mackie, Steffie, Summer, SuperStar and Teresa. Later variations included fringe lashes, open-close eyes, open mouth, pouty mouth and lips that move. In recent years, Barbie dolls have been made to represent Lucille Ball, Marilyn Monroe, model Heidi Klum and other celebrities. The first Barbie had painted and molded eyelashes and a closed mouth. A reproduction of the original Barbie was released in 1994 to celebrate Barbie’s 35th birthday. Barbie celebrated her 50th birthday in 2009 with another new face. The model is Bollywood actress Katrina Kaif.

Q: I was given a copy of a fabric book titled “The Night Before Christmas.” It was a Christmas gift to my uncle in 1906, when he was a child. The book is intact but quite faded.

A: At one time, Saalfield Publishing Co. created a group of children’s books made of muslin. They could be washed and were hard to tear. The company, founded by Alfred J. Saalfield in Akron, Ohio, in 1899, was the country’s largest publisher of children’s books. Saalfield published coloring books, paper dolls, storybooks, educational toys and games. The company closed in 1977 and its library and archives were bought by Kent State University in Kent, Ohio, for its special collection of children’s books. The university lists the publication date of your book as 1912, so your book is not quite as old as you thought. The poem we know as “The Night Before Christmas” by Clement Clarke Moore (1779-1863) was published in a newspaper in 1823 under the title “Account of a Visit from St. Nicholas.” The author’s name was not listed, but in 1844 it was included in a book of Moore’s poems. There is some controversy today about his authorship because evidence suggests the original poem was written by Henry Livingston Jr. (1748-1828). Your book is faded, so the value is only about $15. Books in excellent condition sell for $100.

Q: Can you tell me anything about the plastic Santa bank my father left me? It’s a bust of Santa wearing a black top hat. The coin slot is in the top of the hat, and the bottom of the bank is marked “Knox Hats, New York.”

A: Knox Hats dates back to 1838, when Charles Knox (circa 1818-1895), an Irish immigrant, opened a tiny hat shop on Fulton Street in New York City. The business grew during the second half of the 19th century, and Knox opened a bigger store on Fifth Avenue and a factory in Brooklyn. The company was sold in 1913, but the brand name lived on until the 1950s. Because your bank is plastic, it probably wasn’t made until after World War II. That’s when plastics become widely used. It’s likely the bank was an advertising premium or a Christmas gift given to loyal customers.

Tip: Plastic bubble wrap can ruin the glaze on old ceramics. If the wrap touches a piece for a long time in a hot storage area, it may discolor the glaze or adhere to the surface in an almost permanent glob.

Need more information about collectibles? Find it at Kovels.com, our website for collectors. Check prices there, too. More than 700,000 are listed and viewing them is free. You can also sign up to read our weekly Kovels Komments. It includes the latest news, tips and questions and is delivered by email, free, if you register. Kovels.com offers extra collector’s information and lists of publications, clubs, appraisers, auction houses, people who sell parts or repair antiques and much more. You can subscribe to Kovels on Antiques and Collectibles, our monthly newsletter filled with prices, facts and color photos. Kovels.com adds to the information in our newspaper column and helps you find useful sources needed by collectors.