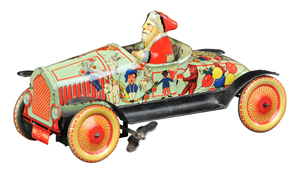 This Santa is a bit thinner than usual so he can fit in his vintage tin car. It’s a windup toy made in Japan before 1940. The toy sold for $37,760 – more than three times its presale estimate – at a 2013 Bertoia auction in Vineland, N.J.

BEACHWOOD, Ohio – Santa Claus traditionally arrives in his sleigh, but children born in the past 100 years or so have wondered why Santa doesn’t use faster, newer ways to make his Christmas Eve journey. Writers and toymakers have modernized the Christmas story in several ways – with a train to the North Pole, an airplane, an early car, modern cars and even Santa in a rocket or spaceship. Of course, some still wonder how he can go around the world in one night while stopping to deliver gifts. One rare toy made in prewar Japan has Santa in an open car that’s decorated with pictures of toys, children and a Christmas tree. Santa is seated with his bag of toys. The car has a clockwork drive wound with a key. It can zoom across the floor. The 7-inch-long toy sold for $37,760 at a 2013 Bertoia auction.

Q: Our family has complete collections of both Bing & Grondahl and Royal Copenhagen Christmas plates. We understand only a limited number of these plates have much value, but we would like to know the value of the collection as a whole. Is it greater than the sum of its parts?

Q: I have a Bols Ballerina liquor bottle with a figural windup ballerina inside. When it’s wound up, it plays music and the ballerina spins and moves her legs. A label on the bottom says “Le Bleu Danube” and “Bottle and Unit Made in France.” The liquor has evaporated a little, but the ballerina works perfectly. The label says “Sale Distributors for the USA, Brown Forman Import Company, New York 16, New York.” Does this bottle have any value?

A: Bols Ballerina bottles were made between 1957 and 1978. They came filled with different kinds of liquor made by Lucas Bols, a Dutch distillery. Two versions were made, with the ballerina wearing either a red skirt or a white skirt. The Bols family opened a distillery in Amsterdam in 1575, making Lucas Bols the world’s oldest distillery brand. There have been several changes in ownership, but the company is still in business. Brown-Forman offered the Bols Ballerina bottle as a Christmas item in 1959. It was produced in limited quantities at that time but proved so popular that thousands more were made. Collectors like unique bottles. A full bottle in its original box sells for the highest price. Your partly full bottle without the box is worth about $50.

Q: We inherited a bird’s-eye maple bedroom set that has been in the family for years. It consists of a bed, dresser, dressing table, rocking chair and straight-back chair. There is a sticker on the back of the dresser that reads, “The Upham Mfg. Co., Marshfield, Wisconsin, Manufacturers of Chamber Suits [sic] and Side Boards.” The drawers to the dresser have little locks and we have the keys. Can you tell us anything about this furniture?

A: William H. Upham and his brother, C.M. Upham, built a sawmill in Marshfield in 1879. In 1881 they opened a furniture factory and veneer mill. Upham Manufacturing Co. was incorporated in 1883. By 1890 the company included a flour mill, grain elevator, general store, railway, waterworks and electric light plant. The 1904 Furniture Journal said the company sold “cheap, medium and high grade chamber suits, odd dressers, chiffoniers, sideboards and buffets.” Upham Manufacturing was in business until 1927. Your furniture was probably made in the late 1890s or early 1900s.

Q: Are my old Budweiser Christmas steins worth anything?

Tip: Coffee and tea stains can be removed from the inside of silver or porcelain pots or cups with warm water and a denture-cleaning tablet. Use a five-minute tablet in two cups of water, let it stand for 10 minutes, rinse and dry. If some loose residue remains, clean it with a wet brush.

Keep up with changes in the collectibles world. Send for a free sample issue of our 12-page, color-illustrated newsletter, “Kovels on Antiques and Collectibles,” filled with prices, news, information and photos, plus major articles and opinions about the world of collecting. An important tool for anyone who buys or sells antiques and collectibles. To subscribe at a bargain $27 for 12 issues, write Kovels, P.O. Box 8534, Big Sandy, TX 75755; call 800-829-9158; or subscribe online at KovelsOnlineStore.com. 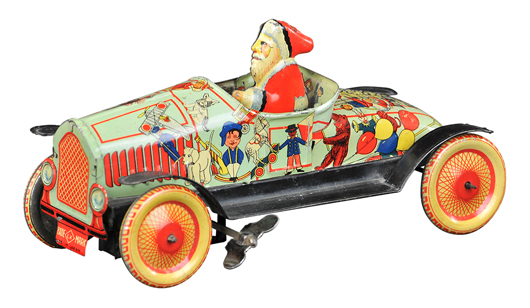 This Santa is a bit thinner than usual so he can fit in his vintage tin car. It’s a windup toy made in Japan before 1940. The toy sold for $37,760 – more than three times its presale estimate – at a 2013 Bertoia auction in Vineland, N.J.