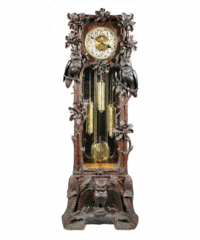 Owls, oak leaves, acorns and ferns are carved on the sides and base of this tall case clock. The 7-1/2-foot-tall clock sold for $14,000. The works are marked ‘Hawina,’ a German trademark.

Black Forest is a term used to describe the elaborate, realistic wood carvings that were thought to be made in the Black Forest region of Bavaria, Germany. In the 1980s, new research proved that the carvings were done in Switzerland, most by the Trauffer family. It is easy to identify pieces. Bears that play instruments, climb trees, hold benches or beg are part of the legs, seats and stands that make up the furniture. Each bear was carved from a linden or walnut tree trunk. Pieces were not signed. A similar type of carving that featured birds, branches and plants also was made in Switzerland. Clock cases were made to hold Swiss clock movements often marked with a company name. Collectors still call both types of carved pieces Black Forest. A carved, tall-case clock recently sold for $14,000 at Neal Auction Co. in New Orleans. The clock movement was marked “Hawina,” a trademark of a German clock company owned by Hans Winterhalder and his family. The company was in business from the 18th century until 1937. The elaborately carved case with owls and branches is not by the carvers of the bear furniture, although it is collected as Black Forest.

Q: I own a cash register that belonged to my great-grandfather. He used it in his produce store in New York City in the late 1930s. It’s in perfect working order; even the customer count works. It must weigh close to 200 pounds and seems to be made out of solid brass. Just under the number display is a fancy plate with the serial number 935158416. Can you tell me its age and value?

A: The first commercially successful cash register was invented in 1878 by James Ritty, a saloon owner in Dayton, Ohio. Ritty sold his cash register business and patents to National Manufacturing Co. In 1884, John H. Patterson bought National Manufacturing and its patents and renamed the company National Cash Register. The serial number on your cash register, 935158, indicates it was made in January 1911. The model number is 416. It is one of the 400-class registers, which are often found today. National Cash Register was the world’s largest manufacturer of cash registers. The name was changed to NCR Corp. in 1974. Today most businesses have replaced cash registers with computers. NCR now makes the modern equivalent of a cash register — point-of-sale workstations — as well as ATMs, software and other products and services.

Q: I inherited more than 40 Royal Doulton figurines from my mother. They are in excellent condition. I’m concerned that future generations may not appreciate the collection, and my husband and I have no children to leave them to. Should we sell them now while there is still a market for them? Also, are we better off selling them individually or as a collection?

Q: I would like to know something about the maker of my wood-burning stove. It’s marked “Monarch Wood Stove, Made in West Bend, Wis., Malleable Iron Range Co.”

A: Malleable Iron Range Co. was founded in St. Louis in 1896 by Silas McClure and A.C. Terrell. “Monarch” is a trademark. The company moved to Beaver Dam, Wis., in 1902. It made coal- and wood-burning stoves. Gas burners were added to some models in 1905. Later the company made electric stoves, refrigerators and water heaters. The Malleable Iron Range Co. went bankrupt in 1985.

Q: I’m looking for information on a vase, or what my mother thinks is an old spittoon. “Sarna Brass” is written on the bottom. I haven’t been able to find a single bit of information about this company.

A: “Sarna Brass” is a trademark owned by S.S. Sarna Inc. of Manhasset, N.Y. The business was started by Sajan Singh Sarna in 1920. Sarna was born in Rawalpindi in British India (now part of Pakistan). He came to the western United States to go to college and study dairy manufacturing. He found that people were interested in buying handcrafts from India, so he started an import business in about 1920. Brass, textiles and other items were among the products he sold. In 1933, with the Depression in full swing, he moved to New York and began selling goods imported from Japan. In 1938, after having a dream about a bell, he went to Indonesia to buy bells, which he sold to department stores in the United States. The bells, each with a “story” tag attached, were popular during the 1960s. His company became known as the Bells of Sarna. Sajan Singh Sarna died in the 1970s. The company is now called S.S. Sarna Inc. and sells a variety of gift items. The value of your vase or spittoon is about $50 to $75.

Tip: Be careful when burning candles in glass candlesticks. If the candle burns too low, the hot wax and flame may break the glass.

New! A quick, easy guide to identifying the valuable costume jewelry from the 1950s on. Kovels’ Buyer’s Guide to Costume Jewelry, Part Two is a report on the most popular styles, makers and designers of costume jewelry. The information makes you an informed buyer and may get you a great buy. Photos, marks, histories and bibliography. The guide features the most wanted costume jewelry made in Europe and the United States. Special report, 2010, 8 1/2 x 5 1/2 inches, 36 pages. Available only from Kovels. Order by phone at 800-303-1996; online at Kovels.com; or send $19.95 plus $4.95 postage and handling to Kovels, Box 22900, Beachwood, OH 44122.