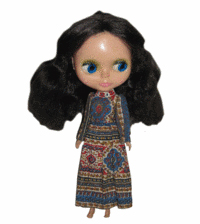 This original 1972 Blythe doll, 11 1/2 inches tall, sold in an online auction for $920. She has a tagged dress and eyes that change to four different colors, but her face is slightly damaged and her hairdo is incorrect.

Quirky fads or unexpected favorites sometimes appear in the world of collecting. Prices go up based on supply and demand, but what creates the demand can be a mystery. Lunchboxes, plastic purses, plastic radios and Beanie Babies are all recent examples. Tulip bulbs in 17th-century Holland are the most famous. A single bulb was selling for more than a house as prices for rare bulbs rose, then prices fell and created chaos. Today’s newest amazing prices are for Blythe dolls, first made in Hong Kong by Kenner in 1972. There were four versions of the doll. Each had a big head and large eyes that changed color. They sold only for a year in the United States. Some slightly different dolls were also made and sold in Japan. There were Blythe wigs and clothing accessories, too. The dolls were soon forgotten by most people, but in 1997 a TV producer in New York began to carry and photograph her Blythe doll. In 2002 she had her photos published in a book, which led to new popularity for the doll. In 2001 Hasbro, which by then owned the Kenner trademark, had given Takara and Cross World Connections (CWC), Japanese companies, a license to make a new “neo” Blythe doll that became so popular it even appeared as a character in some Japanese ads. Toys ‘R’ Us has sole rights to sell CWC’s annual limited-edition Blythe doll every Christmas. The new doll’s success led Ashton-Drake Galleries to make a Blythe doll to sell to adults. These sell today for less than $100 apiece. All of this interest has led to amazing prices for the first dolls. Originally $25, today a 1972 doll in great (but not perfect) condition can sell for $2,000. In an original package, doll clothes can be worth $300 to $400. Doll collectors are very concerned about a Blythe doll’s skin color, hairdo, original accessories and original clothes with original labels. Although there were originally blondes, redheads and black-haired dolls, the highest prices are for dolls with original black hair.

Q: I just bought a mysterious silver spoon that’s 15 inches long. It has a small deep bowl and a long twisted handle with 3-D grape leaves and bunches of grapes at the top. The grapes made me think it was used for wine. It’s marked with the letters “G” and “X” and the word “sterling.”

A: You have a brandy ladle. It was used to scoop up some brandy, light it, then pour it on a flaming dessert like cherries jubilee. The G is the mark of Gorham Manufacturing Co. of Providence, R.I. The X is a date symbol for 1886. Because it’s a one-purpose serving utensil, it usually sells near meltdown price, perhaps $100. But a wine collector or a gourmet cook would pay much more.

Q: What can you tell me about a Mission settee that has been in my family for more than 65 years? It’s oak with no upholstery. The back has vertical slats and the seat lifts up on hinges to reveal a storage area. The printed label on the bottom says, “R.S. Nicholson Co., Jax., Fla.” and “Warsaw Furn. Mfg. Co., Warsaw, Ky.”

A: Warsaw Furniture Manufacturing Co. was in business from around the turn of the 20th century until at least the 1930s. The company is listed in a 1937 Grand Rapids, Mich., furniture show magazine. R.S. Nicholson was probably the retail store where the settee was originally purchased. The Mission style (also called “Arts and Crafts”) was at its peak of popularity during the first two decades of the 20th century, so that’s probably when your settee was made. Settees with storage under the seat were meant to be kept in a front hall. You could sit on the settee to remove your boots, then store them with your hat and gloves under the seat. Mission settees by famous makers like Gustav Stickley sell for thousands. Yours, by a relatively unknown maker, is worth a few hundred dollars.

Q: I have a small collection of calendar plates from the early 1900s. I’ve just come across some calendar towels and wonder if you know anything about their history.

A: Stevens Linen Associates of Dudley, Mass., which was founded in 1846, claims to have made the first calendar towels in 1954. The company is still at it and wholesales to various online and on-land stores across the country. Each towel has a picture and a full 12-month calendar. Colorful calendar towels from the 1950s through the ’70s sell for about $30 each.

Q: My old vase has a circular mark on the bottom with the words “National Brotherhood of Operative Potteries, Union Label, Affiliated AFL.” Beneath that, it’s marked “Goldra, E. Palestine, O.” This vase was around when I was growing up and now I’m 80 years old. It must have been a gift from my great-grandparents, who lived in Youngstown, Ohio. I would appreciate information about it.

Tip: To avoid break-ins, be sure the hinges on your exterior doors are on the inside of the door.

Need more information about collectibles? Find it at Kovels.com, our Web site for collectors. Check prices there, too. More than 700,000 are listed and viewing them is free. You can also sign up to read our weekly Kovels Komments. It includes the latest news, tips and questions and is delivered by e-mail, free, if you register. Kovels.com offers extra collector’s information and lists of publications, clubs, appraisers, auction houses, people who sell parts or repair antiques and much more. You can subscribe to Kovels on Antiques and Collectibles, our monthly newsletter filled with prices, facts and color photos. Kovels.com adds to the information in our newspaper column and helps you find useful sources needed by collectors.

Keep up with changes in the collectibles world. Send for a FREE sample issue of our 12-page, full-color newsletter, Kovels on Antiques and Collectibles, filled with prices, news, information and photos, plus major news about the world of collecting. To subscribe at a bargain $27 for 12 issues, write Kovels, PO Box 420347, Palm Coast, FL 32142; call 800-571-1555; or subscribe online at Kovels.com.