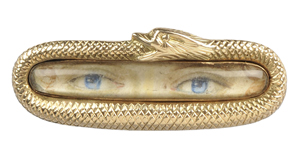 A portrait of a pair of blue eyes and eyebrows is in the center of this antique ‘lover’s eye’ brooch. A gold snake is curled around the edge of the frame. The brooch sold for $2,280 at a Skinner auction in Boston.

Unfaithful spouses have been around since the beginning of time, and they’ve always been a source of gossip. Today there are all sorts of electronic ways to spread gossip, but an earlier method that’s very difficult for us to understand is 18th-century “lover’s eye” jewelry.

Adultery back then could lead to losing your right to be king. Less-prominent lovers might be faced with a duel and death. So why advertise an affair? Perhaps it was a way to brag – or perhaps some of the stories about this jewelry are myths. In 1785, future King George IV and an older Catholic widow with whom he was romantically involved were united in a secret mock marriage. They knew he could not become king with a Catholic wife. So the story goes that the “almost king” commissioned special jewelry – two gem-encrusted brooches, each with a portrait of the other’s eyes. The lovers were sure no one else could identify their eyes.

The brooches soon became stylish and many couples were wearing lover’s eye jewelry. Pins, rings, bracelets, pendants and necklaces were made. By the 1790s, special “mourning eye” jewelry was being made using portraits of the eyes of dead spouses or lovers. Eventually the pins were exchanged between mothers and daughters, sisters and close friends, but the fad was almost over by the 1830s. Antique eye jewelry sells for high prices today. A 1 3/8-inch brooch with a portrait of two blue eyes set in an oval frame edged with a coiled gold serpent sold for $2,280 at a December 2012 Skinner auction in Boston.

But beware. Many fakes have been made by removing the center of a brooch and inserting a new picture of an eye. Even old gems and original goldsmith-made mountings have been used to make fantasy pieces. Experts say you can detect a fake. Genuine antique lover’s eyes were painted on ivory and covered with a piece of crystal. The eye or eyes should be the proper size for the space. Look for details like an eyebrow and shadows near the eye that suggest a portrait made from life, not a quick copy.

Q: I found an interesting object at a local yard sale. It’s a miniature Empire State Building with a thermometer in the front. It’s 6 3/4 inches tall and is made of plated metal with a golden patina. I paid $1 for it. Is it worth more than that?

A: Lots of souvenirs have been made of the Empire State Building since it was built in 1931. It was the world’s tallest building for decades. Your souvenir thermometer was made in the mid-20th century. Souvenirs like yours usually sell online for $10 to $20, so you got a good deal.

Q: I have a ceramic vase that resembles some made by Canuck Pottery. It’s kind of freeform and rough looking. Someone told me it might be Beachcomber Ware. It’s marked “St. John, Canada.” Can you help me identify the maker?

A: It’s not possible to positively identify your vase without seeing it and the mark on the bottom. Canuck Pottery was located in St. John, New Brunswick, from 1938 until about 1964. The pottery moved to Labelle, Quebec, after a fire at the St. John site. Beachcomber Ware was made in about 1958. Canuck Pottery went out of business in the 1970s. Show it to a local antiques dealer.

A: The mark was used by Eppelsheimer & Co. of New York City. The company was in business from 1880 to 1947. It was one of the major U.S. producers of pewter molds for ice cream and chocolate. Eppelsheimer sold molds to confectioners, ice-cream companies and other retailers. The number marked on the mold is its catalog number. When the company closed, the dies for the molds were sold. Another American company has been making tin molds from the old dies since the 1980s. Old pewter molds may contain lead and should only be used for display, since they might contaminate food. The value of pewter molds ranges from $50 to $100.

Q: We have an “invalid rolling cart” made by Colson Corp. of Elyria, Ohio. Our school was going to put it in a dumpster. Can you tell us how old it is and what it’s worth?

A: Colson started out as Fay Manufacturing, makers of the Fairy Tricycle, in 1885. There have been several changes in ownership and corporate name since then. By 1903, Fred Colson was one of the owners of the company, then called Worthington Manufacturing Co. The company made tricycles, wheelchairs, invalid chairs, carts and more. In 1917 it became Colson Co. and manufactured wheeled equipment for hospitals and industry. The company’s name was changed to the name on your cart, Colson Corp., in 1933. Colson was bought by Sentinel Capital Partners in 2012 and is still in business. Your cart, made after 1933, is not old enough to be antique, but it’s unusual. It would be hard to sell but might interest a historical society.

Tip: Wrapped wicker furniture should be repaired as soon as possible. Rewrap the wicker and glue the end with white glue.

Ralph and Terry Kovel, syndicated newspaper columnists, best-selling authors, avid collectors and national authorities on antiques, hosted the HGTV series “Flea Market Finds with the Kovels.” Enjoy the shows all over again and explore some of the most exciting flea markets in the U.S. In each episode, Ralph and Terry share their secrets about when and where to shop, what to look for at shops and flea markets, and how to make a good buy. These DVDs include the first season of the series. You’ll see rare marbles, antique quilts, European chests and boxes, Satsuma pottery, ceramic tobacco jars, Bakelite jewelry, vintage plastic dime store toys, Czechoslovakian glass, Big Little Books, can labels and seed packets, old prints and more. Available online at Kovelsonlinestore.com; by phone at 800-303-1996; or send $29.95 plus $4.95 postage to Kovels, Box 22900, Beachwood, OH 44122. 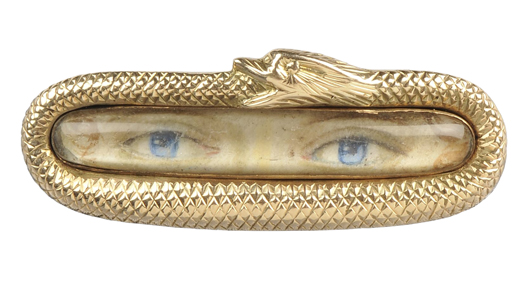 A portrait of a pair of blue eyes and eyebrows is in the center of this antique ‘lover’s eye’ brooch. A gold snake is curled around the edge of the frame. The brooch sold for $2,280 at a Skinner auction in Boston.