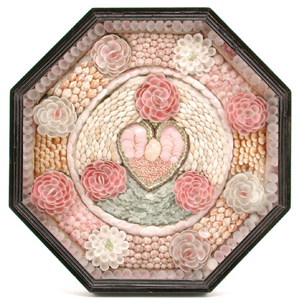 This 15-inch sailor’s valentine was made from hundreds of small shells. It dates from the 19th century and sold for $1,800 at a November 2011 sale at San Rafael Auction Gallery in San Rafael, Calif.

Valentine’s Day has been celebrated for centuries. By the 1790s, romantic cards were being given to that “special” person. The idea of cards and gifts has continued, and collectors search for all types of valentines of the past—everything from pasted-together lacy cards and “mechanical” cards that pop open into a 3-D display, to very modern talking cards.

Sometimes collectors think any picture or figure with a romantic message is an old valentine. One of the most famous of these is the “sailor’s valentine.” It usually is an octagonal wooden box that holds a picture made of seashells placed in a geometric pattern. Often the design included sentimental words like “Love the Giver” or “Forget Me Not.” For many years, collectors thought these boxes were made by sailors on long voyages as gifts for a girlfriend or mother. They were considered nautical folk art in a category with carved whales’ teeth and other scrimshaw. They were expensive, selling for about $200 to $500.

In the 1970s, a sailor’s valentine was discovered that had a label on the back: “B.H. Belgrave, Dealer in Marine Specimens … Bridgetown, Barbados.” There was even a crushed Barbados newspaper under the shells. Further research showed that the shells were from local waters and some of the boxes had slogans that were not romantic. It was determined that the boxes were sold to sailors who visited Barbados and took them home as souvenirs.

The name “sailor’s valentine” continues to be used, though, and folk art collectors still pay high prices for old examples. San Rafael Auction Gallery in California sold a 19th-century example in 2011 for $1,800. It had a heart in the center formed by shells. Copies of these shell pictures made today sell for about $500 to $2,500. There are also companies that sell the shells, boxes and other parts needed to make your own new sailor’s valentine.

Q: I have an old fireplace screen from the “P.B.M. Co.” in Hoboken, N.J. It’s a lovely piece, wood-framed and with a laminate finish. Can you tell me anything about this?

A: The initials on your fireplace screen probably are “F.B.M. Co.,” which refer to the Ferguson Brothers Manufacturing Co. The company was in business from 1898 to 1953, when it was bought by Sun-Glo Industries and moved to Virginia. Ferguson Brothers made inexpensive furniture, including folding screens, folding tables and chairs, cellarettes, magazine racks, smoking stands and “furniture novelties.” Fire screens are not a popular type of furniture. Unless they date from the 1700s or 1800s, they sell for about $100 to $150.

Q: I found two prints that are signed by Lionel Barrymore. They are on gold foil paper. One is titled “Purdy’s Basin” and the other, “Point Pleasant.” I knew him as an actor and I’m curious about his other artistic talent. Can you tell me something about these prints?

A: Lionel Barrymore (1878-1954) began his acting career on stage in the 1890s. He is a member of the famous Barrymore family of actors, brother of Ethel and John and great uncle of Drew Barrymore. The family surname actually is Blythe. The first member to appear on stage, Herbert Arthur Chamberlayne Blythe, took the stage name Maurice Barrymore so that he wouldn’t embarrass his family by being an actor. In 1906 Lionel Barrymore moved to Paris to study painting. He returned to the United States a few years later and appeared in his first movie in 1911. He continued to do etchings and paintings and also composed music and wrote a novel. After he died, reproduction prints of some of his etchings were made. Prints on gold or silver foil were made after his death. Your prints are worth about $25 each.

Q: For about 45 years, my family has owned a gold-painted vase stamped “Dixon Art Studios, 22 Kt Gold.” The vase is 22 inches tall and 5 inches in diameter. The gold appears to be layered with liquid droplets. Please tell us something about its history and value.

A: Your vase is decorated in a style collectors call “weeping gold.” Any piece marked “Dixon Art Studios” was made at Bel Terr China Inc. in East Palestine, Ohio. Bel Terr was founded in 1961 by Belden Ham and his wife, Terry Ham (the company’s name is a combination of their names). Most Bel Terr pottery is marked with the corporate name, but some lines, like Dixon and an early line marked “Good Earth Pottery,” are not. Dixon Art pieces generally sell for under $100.

Q: I have a figural bottle that says “Leading Lady Cologne.” It’s in the shape of a woman wearing late 1900s attire. Her hat comes off to open the bottle. It was made by the Fuller Brush Co. Can you tell me anything about it?

A: Fuller Brush introduced its Leading Lady Cologne in 1957. But the bottle was made in Japan. The company introduced eight more fragrances in the early 1960s. Fuller Brush began in 1906 when Alfred C. Fuller began selling custom-made brushes door-to-door. Today more than 2,000 items, including cleaning products for home and business as well as some personal-care products, are made in the Fuller Brush manufacturing facility near Great Bend, Kan. The products can be bought through independent distributors, in stores and from the company’s website. The company operates under three basic rules: “Make it work. Make it last. Guarantee it no matter what.” The bottle is worth less than $30.

Tip: Treat your tables to custom-made glass tops. They will save the finish and make you a more relaxed hostess, knowing that wet glasses will not damage your tabletops.

Sign up for our weekly email, “Kovels Komments.” It includes the latest news, tips and questions and is free if you register on our website. Kovels.com has lists of publications, clubs, appraisers, auction houses, people who sell parts or repair antiques and more. Kovels.com adds to the information in this column and helps you find useful sources needed by collectors.


Terry Kovel answers as many questions as possible through the column. By sending a letter with a question, you give full permission for use in the column or any other Kovel forum. Names, addresses or email addresses will not be published. We cannot guarantee the return of any photograph, but if a stamped envelope is included, we will try. The volume of mail makes personal answers or appraisals impossible. Write to Kovels, Auction Central News, King Features Syndicate, 300 W. 57th St., New York, NY 10019.

Keep up with changes in the collectibles world. Send for a free sample issue of our 12-page, full-color newsletter, Kovels on Antiques and Collectibles, filled with prices, news, information and photos, plus major news about the world of collecting. To subscribe at a bargain $27 for 12 issues, write Kovels, PO Box 8534, Big Sandy, TX 75755; call 800-829-9158; or subscribe online at Kovelsonlinestore.com. 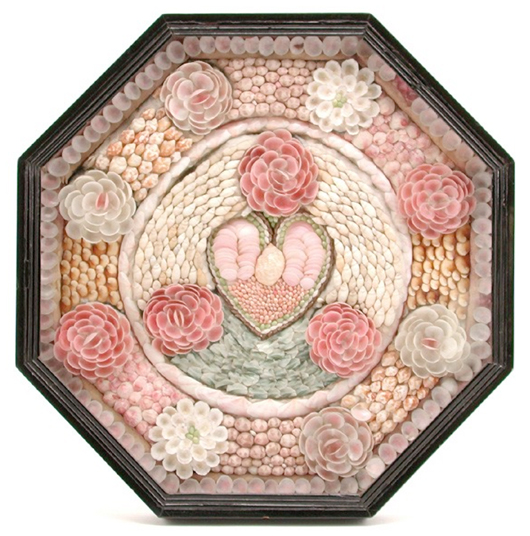 This 15-inch sailor’s valentine was made from hundreds of small shells. It dates from the 19th century and sold for $1,800 at a November 2011 sale at San Rafael Auction Gallery in San Rafael, Calif.