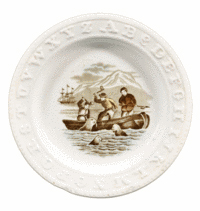 This 1880s child’s plate has letters around the edge to teach the alphabet and a picture in the center to display a method of hunting seals. The plate sold at a Skinner auction in Boston for $148, below auction estimate, perhaps because the picture of a seal hunt is controversial today, Image courtesy of Skinner Inc., www.skinnerinc.com.

Opinions change with time. Throughout the past 40 years, it has become popular to “think green.” But our ancestors hunted for food and killed buffalo, deer and passenger pigeons, making some species endangered and others extinct. It was proper to kill animals, throw garbage out into the backyard without composting it or play with the mercury from a broken thermometer, which today we know is dangerous. Toys reflected scenes of everyday life, so it is not surprising to find an antique child’s plate with what we consider a frightening decoration. Some small plates were made with the letters of the alphabet embossed on the border. These alphabet plates were popular from the 1780s to the 1860s. The letters taught a child to read, and the center design usually included a nursery rhyme, proverb or wise saying. Some plates pictured a mother or father doing everyday jobs like cooking or sewing or farming. Alphabet plates were made of pottery, porcelain, glass or metal and sometimes came with matching mugs.

One early-19th-century English plate that recently auctioned caused comment among the bidders. The transfer-decorated Staffordshire plate pictures hunters in a canoe surrounded by seals. The hunters are beating the seals to death with clubs so they can sell the fur. Canada banned hunting baby harp seals in the water in 1984, and Russia banned killing baby seals in 2009. Before various countries’ bans, hunting killed many baby seals and lowered the seal population, but the bans have brought seal herds back to a larger size.

Q: Twenty years ago, I bought two antique Windsor chairs from a friend for $1,500. A dealer recently appraised them for $1,250 each. I have been unable to find any information about the cabinetmaker. His mark is machine-carved on both chairs and reads “John M. Bair, Hanover, Penna.”

A: The machine-carved marks indicate that your chairs are not antiques. Bair’s Cabinet Shop, the name of John M. Bair’s business, operated from 1933 to 1964 in Hanover and later Abbottstown, Pa. So your chair dates to Bair’s early years in Hanover. Bair’s made high-quality reproductions of antique furniture, especially Colonial Revival furniture. So your chairs date from the 1930s at the earliest. They’re not antique, but that doesn’t mean they’re not well-made chairs worth the price you paid or more.

Q: I have a painting on tin of a black woman and a blond girl making a gelatin salad. In the bottom right corner it’s signed “Harry Roseland” and dated 1901. Can you help me determine the value of this painting?

A: Harry Herman Roseland (circa 1867-1950) was an American painter. He is known for his paintings of people in turn-of-the-20th-century settings. Your picture was used in an ad for Knox Gelatine. Prints were given to customers as premiums, tin signs with the image hung in grocery stores; and the original painting may have hung in the corporate offices. Charles B. Knox invented a gelatin powder in 1890 and founded the Charles B. Knox Gelatine Co. in Johnstown, N.Y., in 1896. Knox is now part of Kraft Foods. You have a print, not an original painting. A copy of your print in mint condition and framed sold online for $427 a few years ago.

Q: I have several records marked “Vogue.” The records have a picture printed right on the vinyl. I’d like to know something about them. Are they valuable?

Q: I am a collector of Occupied Japan ceramics. Another collector I ran into told me that Occupied Japan items were stamped in red, black or blue, and that a piece with a red mark is more valuable than a piece marked in blue or black. Is this true?

Tip: Some tea and coffee stains on dishes can be removed by rubbing them with damp baking soda.

Need more information about collectibles? Find it at Kovels.com, our website for collectors. Check prices there, too. More than 800,000 are listed, and viewing them is free. You also can sign up to read our weekly Kovels Komments. It includes the latest news, tips and questions and is delivered by e-mail, free, if you register. Kovels.com offers extra collector’s information and lists of publications, clubs, appraisers, auction houses, people who sell parts or repair antiques and much more. You can subscribe to Kovels on Antiques and Collectibles, our monthly newsletter filled with prices, facts and color photos. Kovels.com adds to the information in our newspaper column and helps you find useful sources needed by collectors.

New! A quick, easy guide to identifying valuable costume jewelry made since the 1920s. Kovels’ Buyers’ Guide to Costume Jewelry, Part Two, a report on the most popular styles, makers and designers of costume jewelry. The report makes you an informed collector and may get you a great buy. Photos, marks, histories and bibliography. Special Report, 2010, 8 1/2 x 5 1/2 inches, 36 pages. Available only from Kovels. Order by phone at 800-303-1996; online at Kovels.com; or send $19.95 plus $4.95 postage and handling to Kovels, Box 22900, Beachwood, OH 44122.