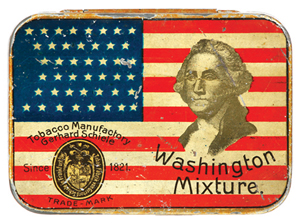 President George Washington’s face is pictured with a flag on the lid of this 3-inch-by-4-inch 1890s tobacco tin. It sold for $303 at a William Morford auction in Cazenovia, N.Y.

It would not be in good taste or even legal to use a picture of the president of the United States as part of a product’s package design or advertisement. Most states have laws that prohibit the unapproved use of a person’s name or likeness for “commercial benefit.”

This was not a concern when George Washington (1732-1799) was president (1789-1797). He was admired by the public, but there were no photographs of him and few portraits. Product packaging back then was usually a plain black and white folded paper packet. In the 19th century, celebrations of Washington’s Feb. 22 birthday and the July 4 birthday of the United States made Washington a symbol of the country. A surprising number of things collected today feature Washington’s portrait. At least three tobacco companies used “Washington” as a brand name one for pipe tobacco, one for plug tobacco and one for chewing tobacco. Each had a picture of Washington on the package, often beside a flag and other patriotic symbols. Collectors of Washington memorabilia can also find a brand of coffee, a soup company’s ads, dishes, calendars and many other products that feature Washington’s image. No doubt he would be upset to know he once advertised Acapulco Gold cigarette papers. Other Washington collectibles found today include old posters and signs advertising products like insurance, 1876 U.S. Centennial furniture with wooden inlay picturing Washington, and paper needle cases from 1930s dime stores. Even today Washington is a spokesman for products. In the past year, he has promoted cars, beer, an appliance store and a state lottery.

A colorful tobacco tin for Washington Mixture tobacco, picturing Washington and a flag, auctioned for $303 at a 2012 William Morford auction in upstate New York. Almost all George Washington-related collectibles and antiques are selling well.

Q: My mother said she and my father had the first radio in our area, and people came from all over to listen to it. She thought it was about 1919 or 1920. My dad built the radio, then bought a cabinet to put it in. The cabinet has a label that says “American Beauty Radio Cabinets & Console Speakers, Mfg. by Pierson Co., Rockford, Ill.” The radio was disposed of long ago, but we still have the cabinet. It has all its original knobs and is in good condition. I’d like to know when it was built and what it’s worth.

A: The first commercial radio broadcast was made when KDKA of Pittsburgh broadcast the results of the presidential race between Warren Harding and James Cox on Nov. 2, 1920. Radio receivers were not widely available at the time. In the 1920s, many people made their own radios by assembling the necessary components and attaching them to a board. By the late 1920s, radios were being manufactured for sale, and furniture companies began making cabinets to put them in. Pierson Furniture Co. was founded in 1927. It became Pierson Radio Co. in 1930 and began making radio cabinets. In 1940 the company switched from manufacturing to retail, and its name was changed to Pierson Factory Showrooms. Your empty cabinet would sell as used furniture and might bring a few hundred dollars.

Q: Have you ever heard of green glass goblets filled with peanut butter and sold by Armour Meat Packing Co.? My brother-in-law worked for Armour in the late 1930s and early 1940s. He would bring home various purchased meats and also peanut butter packed in these goblets. I have three of them and would like to donate them to Armour for its museum, if they have one.

A: Armour was founded in 1867. Although the company’s main business was meat packing, it also made bacon, ham and other meat products, as well as canned food, jam, jelly, lard, salad oil, soup, peanut butter and other products. The company used byproducts of the slaughterhouse to make brushes, glue, strings for musical instruments and tennis rackets, sutures and pharmaceuticals. Armour’s refrigerated meats, nonrefrigerated products and pharmaceuticals are owned by different companies today. Several companies packed peanut butter in goblets or glasses in the 1940s and ’50s. By the 1950s, they were also using decorated glass as packaging. The pressed glass goblets sell for about $5 to $10 each today.

Q: I have a 9 1/2-inch-high oval crystal vase that’s heavy and has lots of detail on it. Mother said it was “Imperial Crystal.” I found Imperial listed in a book at the library, but it said the company made only pottery. Who made my vase?

A: The name Imperial has been used by several companies. Some made pottery or porcelain and others made glass. The Imperial Glass Corp. produced glass in Bellaire, Ohio, from 1901 to 1984. Glass made by this company was sometimes marked “Imperial,” but we have never seen any marked “Imperial Crystal.” A company named Imperial Crystal exists today, but it doesn’t make vases like yours. It personalizes items made by other companies. Your vase probably was made by the Ohio company.

Tip: Do not store jewelry in silk or wool bags. The fabric may contain sulfur or plastic that can discolor silver and copper.

Take advantage of a free listing for your group to announce events or to find antique shows and other events. Go to Kovels.com/calendar to find and plan your antiquing trips.

Contemporary, modern and mid-century ceramics made since 1950 are among the hottest collectibles today. Our special report “Kovels’ Buyers’ Guide to Modern Ceramics: Mid-Century to Contemporary” identifies important pottery by American and European makers. Includes more than 65 factories and 70 studio artists, each with a mark and dates. Works by major makers, including Claude Conover, Guido Gambone and Lucie Rie, as well as potteries like Gustavsberg, Metlox and Sascha Brastoff, are shown in color photos. Find the “sleepers” at house sales and flea markets. Available only from Kovels. Order by phone at 800-303-1996; online at Kovels.com; or send $19.95 plus $4.95 postage and handling to Kovels, P.O. Box 22900, Beachwood, OH 44122. 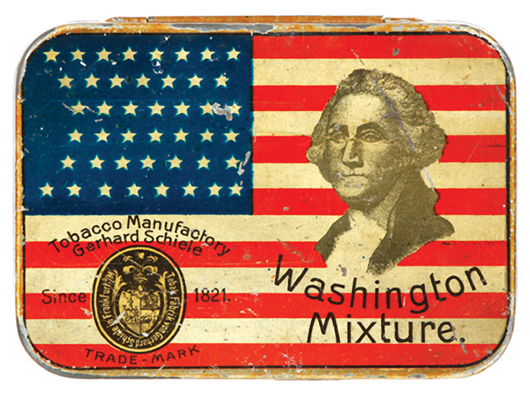 President George Washington’s face is pictured with a flag on the lid of this 3-inch-by-4-inch 1890s tobacco tin. It sold for $303 at a William Morford auction in Cazenovia, N.Y.