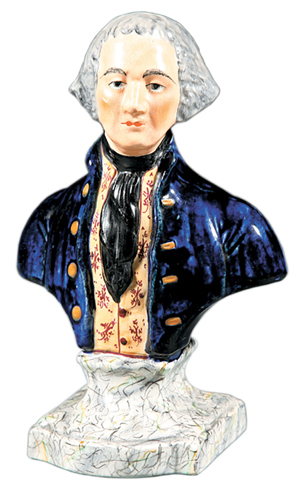 Can you recognize George Washington? This Staffordshire bust made in England in the 19th century does not look much like the oil paintings made when Washington was alive. But he was still admired years after his death, and this type of figure sold well until the 1850s. Price: $240 at a 2011 Neal Auction in New Orleans.

Presidents Day, still officially named George Washington’s Birthday, is celebrated on the third Monday in February. But it has not always been celebrated on that day. George Washington’s birthday, Feb. 22, was first celebrated as a federal holiday in 1880. It was moved to the third Monday in February in 1971 as part of a law that made many holidays fall on Mondays so citizens could enjoy a long weekend.

In 1951 there was an attempt to change the holiday to Presidents Day to honor all presidents, not just George Washington, but for years there were arguments about when to schedule it, what to name it and whom to honor.

In the mid-1980s, the use of the term “Presidents Day” instead of “Washington’s Birthday” spread across the country, spurred by stores advertising sales. While some states honor various presidents, usually those from the state, on the holiday, George Washington is part of all of the celebrations.

When Washington died, the public bought Staffordshire figurines picturing him, textiles with pictures of him ascending to heaven and many memorial medals and plates. Photographs did not exist, so these souvenirs, along with oil paintings, show how he looked. Many of the souvenirs are inaccurate representations of Washington, but they’re of interest to collectors today.

Q: I recently acquired an antique buffet made in a traditional style. A nameplate in a drawer says “Joerns Bros. Furniture Co., Stevens Point, Wis.” Please tell me something about the maker and what the piece might be worth.

A: Brothers Charles, Paul and Frederick Joerns founded their furniture manufacturing company in St. Paul, Minn., in 1898. Within a few years, the company moved to Sheboygan, Wis., a center of furniture-making at the time. After a fire at the Sheboygan plant, Joerns Brothers Furniture Co. moved again in 1927, this time to Stevens Point. Joerns made high-quality bedroom and dining-room sets until the late 1950s, when new management changed the company’s focus to less-expensive furniture. When that business model failed, the company began making furniture for nursing homes and has thrived in the health-care business ever since. Your buffet was made after Joerns moved to Stevens Point in 1927, so it is not technically an “antique” because it is not 100 years old. And its traditional style probably indicates that it dates from no later than 1940. But it is a good solid piece of furniture. If it’s in excellent condition, you might get several hundred dollars for it.

Q: I have two matching framed prints, one with a portrait of Abraham Lincoln and one with a portrait of George Washington. The first one has a small metal plaque that says “Abraham Lincoln by George P.A. Healy – The White House Collection from The President and Mrs. Nixon – Christmas 1971.” The George Washington print has a similar plaque and is dated Christmas 1969. Do you know anything about these?

A: President Richard Nixon and his wife gave prints of famous presidential portraits to White House staff members as Christmas gifts each year he was in office. Each print was in a red presentation folder and included a parchment sheet with an explanation of the portrait, a ribbon and an embossed presidential seal. Hallmark made 3,500 copies of Gilbert Stuart’s portrait of Washington for the 1969 gift. A print of Jefferson’s portrait was given in 1970, Lincoln in 1971, Theodore Roosevelt in 1972 and James Monroe in 1973.

Q: I own a glass plate that belonged to my grandmother, who was born in 1885. It is decorated with an embossed figure of President William McKinley, showing his birth date on the left side above his elbow and his death date on the right side. At the top of the plate it reads, “It is God’s way,” and on the bottom, “His will be done.” There is no name of a company to identify who made this.

A: William McKinley was elected president of the United States in 1899. He was shot by an anarchist, Leon Czolgosz, while he was visiting the Pan-American Exposition in Buffalo, N.Y., on Sept. 6, 1901. McKinley died the next week, on Sept. 14. His last words were: “It is God’s way. His will be done.” Your pressed glass plate was made in 1901, but its manufacturer is unknown. Value: $50.

Q: I have a Mary Marvel wristwatch that dates back to 1948. My parents had this watch for sale in their jewelry store in Berlin, Wis. It still keeps time. I’d like to know what it’s worth.

A: The character Mary Marvel first appeared in a Captain Marvel Adventures comic book published by Fawcett Publications in 1942. She was Captain Marvel’s sister and possessed the same powers as her brother. Mary Marvel had her own series of comic books from 1945 until 1948. She continued to appear in other Marvel comics published by Fawcett until 1954. Mary Marvel wristwatches came with different colored bands and in different boxes. We have seen them with red, green, blue and black bands. The earliest boxes had a Mary Marvel cover pasted over the original Captain Marvel cover. Value of your wristwatch is $200 to $300.

Tip: Do not wash or rinse gold-decorated glass with very hot water or strong soap. It will remove some of the gold.

Take advantage of a free listing for your group to announce programs or to find antique shows and other events. Go to Kovels.com/calendar to find and plan your antiquing trips.

Kovels’ American Collectibles, 1900 to 2000 is the best guide to your 20th-century treasures – everything from art pottery to kitchenware. It’s filled with hundreds of color photographs, marks, lists of designers and manufacturers and lots of information about collectibles. The collectibles of the 20th century are explained in an entertaining, informative style. Read tips on care and dating items and discover how to spot a good buy or avoid a bad one. And learn about hot new collectibles and what they’re worth so you can make wise, profitable decisions. The book covers pottery and porcelain, furniture, jewelry, silver, glass, toys, kitchen items, bottles, dolls, prints and more. It’s about the household furnishings of the past century – what they are, what they’re worth and how they were used. Out-of-print but available online at Kovels.com; by phone at 800-303-1996; or send $27.95 plus $4.95 postage to Kovels, Box 22900, Beachwood, OH 44122. 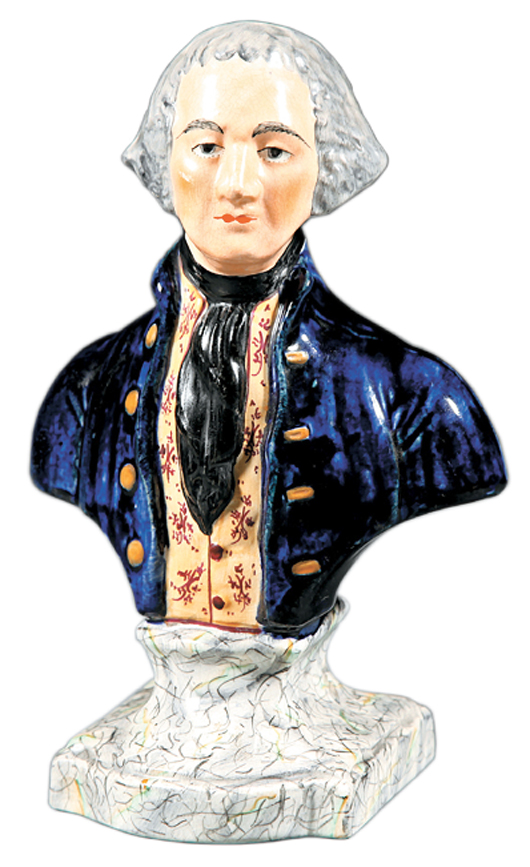 Can you recognize George Washington? This Staffordshire bust made in England in the 19th century does not look much like the oil paintings made when Washington was alive. But he was still admired years after his death, and this type of figure sold well until the 1850s. Price: $240 at a 2011 Neal Auction in New Orleans.