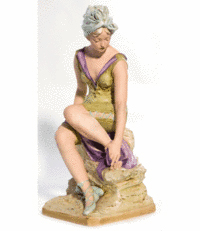 This young maiden is a Royal Dux figurine made after 1900. It is marked with a raised pink triangle that includes the company name. It sold for $675 by Early Auction Co., Milford, Ohio, this past fall.

American collectors often nickname companies, so the Duxer Porzellanmanfactur is better known as Royal Dux. The porcelain factory was started by E. Eichler in Dux, Bohemia (now Duchov, Czech Republic), in 1860. It specialized in art nouveau porcelain figurines, busts of attractive maidens and ornate vases with 3-D figures climbing up the sides. It remained in business through World War I, World War II and the Nazi occupation, the forming of Czechoslovakia and the split into the Czech Republic and the Slovak Republic. The company has made more than 12,000 different figures and vases. It is now selecting some old pieces to be made again and sold on the collectibles market. Old pieces are clearly marked with variations of the words “Royal Dux” or an acorn in a triangle or circle.

Q: About 10 years ago, my wife and I bought four cafe-style bentwood chairs marked “Mundus, made in Poland, fabrique en Pologne.” There’s a patent date, “Sept. 22, ’14,” on the metal leg brackets. The dark finish appears to be original. We paid about $100 for all four chairs. We’re curious about the chairs’ maker and their value.

A: Mundus was a German conglomerate formed when Leopold Pilzer (1871-1959), an Austrian banker, consolidated 16 small chair manufacturing companies around the turn of the 20th century. It competed with Thonet and Jacob & Josef Kohn, two large chair companies that later merged with Mundus (Kohn in 1914 and Thonet in 1923). Your chairs were made before the Kohn merger, so they date from between about 1900 and 1914. If they’re in excellent condition, each one could sell for a few hundred dollars.

Q: I received an Anne Shirley Effanbee doll for Christmas in 1940. I still have her. She is 21 inches tall, has her original blond wig and is wearing her original dress, slip, panties, socks and shoes. What do you think she’s worth today?

A: Anne Shirley (1918-1993) was a popular American actress during the late 1930s and early 1940s. She was born Dawn Evelyeen Paris and began her acting career at the age of 5. After portraying the fictional character Anne Shirley in the 1934 movie, Anne of Green Gables, she changed her name to Anne Shirley. Effanbee made Anne Shirley dolls in four sizes from 1935 to 1940. Yours, the second-largest size, sells today for $350-$400 if it’s in excellent condition. With the original box, it would sell for nearly twice that.

Q: My father was in law enforcement until he was killed in an accident in 1942. My mother received a condolence letter on FBI letterhead from J. Edgar Hoover, the FBI director. He signed his own signature, but the letter is typed. What would the letter sell for?

A: J. Edgar Hoover (1895-1972) was director of the FBI from the time of its founding in 1935 until he died. His autograph on a typed letter retails for about $175. If you were to sell it to a dealer, you could expect to get about half that. Of course, an expert has to look at the letter to make sure it was signed by Hoover himself and not an assistant or a secretary.

Q: My 85-year-old mother-in-law gave us a pewter basket that belonged to her great-grandmother. It is marked “Aurora SP Mfg. Co.” We can’t find anything about it on the Internet. Can you tell us who made it and how old it is?

A: The mark was used on silver-plated hollowware made by Aurora Silver Plate Co. of Aurora, Ill. The company was in business from 1869 until 1919. Your pewter basket was originally silver-plated. Most old silver plate was made on britannia, which is a type of pewter. When the finish is worn off, the base pewter can be seen.

Q: I have a metronome that my parents bught in the early 1920s. It is made of dark wood and has a gold-colored hexagonal medallion on the front with “Metronome de Maelzel” in the middle and the words “France, Amerique, Belgique, Paris, Holland, Angleterre” along the outside edges of the hexagon. I would like to know if it is a valuable antique.

A: Metronomes have been used by musicians since the 1800s. Some were made by clockmakers, since the metronome operated on a pendulum. Attempts to make a device to measure tempo were made as early as the late 1600s, but the first successful metronome was invented by Dietrich Nikolaus Winkel in Amsterdam in 1812. Johann Nepomuk Maelzel made a similar device and was granted a patent for the Maelzel Metronome in 1816. The “MM” numbers on music indicate the number of beats per minute. Digital metronomes were introduced in the late 1970s and are more accurate than the pendulum type. Today you can even use an online metronome to help you keep time when practicing. Most old metronomes are sold to people who want to use them and sell for about the same as new ones.

Tip: Do not use transparent tape or other sticky tapes on paper. Even if the tape is removed, the paper will eventually discolor from the contact with the glue.


Need more information about collectibles? Find it at Kovels.com, our Web site for collectors. Check prices there, too. More than 700,000 are listed, and viewing them is free. You can also sign up to read our weekly Kovels Komments. It includes the latest news, tips and questions and is delivered by e-mail, free, if you register. Kovels.com offers extra collector’s information and lists of publications, clubs, appraisers, auction houses, people who sell parts or repair antiques and much more. You can subscribe to Kovels on Antiques and Collectibles, our monthly newsletter filled with prices, facts and color photos. Kovels.com adds to the information in our newspaper column and helps you find useful sources needed by collectors.

Identify your pottery and porcelain. Kovels’ New Dictionary of Marks: Pottery and Porcelain, 1850 to the Present pictures more than 3,500 marks found on 19th- and 20th-century American, European and Asian pottery and porcelain. It includes factory dates, locations and other information. Marks are sorted by shape, and there’s a special section on date-letter codes and factory “family trees.” Available online at Kovelsonlinestore.com; at your bookstore; by phone at 800-571-1555; or send $19 plus $4.95 postage to Kovels, Box 22900, Beachwood, OH 44122.