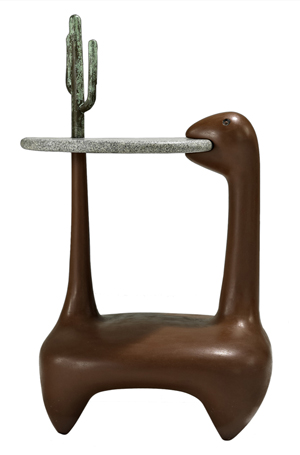 ‘Arizona’ is the name of this unusual side table made in 1986. It sold for $23,750 at an auction of 20th-century art and antiques held at Rago Arts & Auction Center in 2012. The table is made of painted wood, granite and copper. It is marked

BEACHWOOD, Ohio – Collectors and collections are getting younger. So the old 1950s favorite, Chippendale furniture, has now been replaced by 1950s Eames pieces. And 18th-century English Staffordshire ceramics are not as wanted as much as Ohio-made 20th-century Rookwood pottery. Many auction galleries are holding special auctions that feature furniture, glass, pottery, jewelry and even toys made after 1950.

A unique table made by Judy Kensley McKie (b. 1944) sold at a 2012 Rago auction for $23,750. The artist started making furniture soon after she graduated from Rhode Island School of Design in 1966. She wanted to furnish her home, so she taught herself how to make one-of-a-kind pieces. By the 1980s, she was receiving national awards for her work. Her tables were made of carved and painted wood, bronze, marble and even plastic. Many resembled animals, including horses, bears and rhinoceroses. They are imaginative, often humorous and very usable. McKie is one of many studio artists who have been working since the 1950s and whose works are now included in museum collections. Collectors should look for quality in the almost-new as well as the old when going to sales.

Q: I have a sterling-silver bracelet and earrings that were made in Denmark. Each earring is shaped like two leaves, and the bracelet is made of links of two leaves each. The back is marked “Sterling A8K Denmark.” Can you tell me who made it and what it’s worth?

Q: My wife’s estate included a 1-liter Lalique perfume bottle that has two birds on the stopper. It is 9 inches tall and 6 inches wide and still is filled with perfume. Can you give me a value?

A: The perfume bottle was designed in 1947 by Marc Lalique for Nina Ricci’s fragrance “L’Air du Temps.” The clear glass bottle has fluted sides and a frosted stopper with the fragrance’s iconic figural doves in flight. This 9-inch bottle is a “factice,” a store display bottle. A few L’Air du Temps perfume bottles the size of yours have sold at auction for $200 to more than $500.

Q: I inherited a large neon clock from my uncle, who was a meat inspector in Los Angeles in the 1950s. It was made by the Glo-Dial Corp. and has the words “Hungarian Salami” around the dial. It has green neon lighting and is 32 inches across. The patent number is 1994950. Can you tell me the history and value of this clock?

A: The Glo-Dial Corp. was in business from the 1930s until the 1950s or later. Charles Hoffritz, who founded Glo-Dial in Los Angeles, was granted a patent for an illuminated clock dial in 1934. The dial had a black background, beveled white hands, white numerals and a neon tube concealed behind the dial. The white surfaces diffused the light, which reflected off the glass covering the dial and illuminated the numbers and hands. Advertising clocks are collectible. Your clock is worth about $400 to $500.

Q: Years ago, I bought a box of dinnerware made with rice carefully imbedded and baked into the porcelain. The rice pieces are translucent when the piece is held toward the light. The dishes are white with blue designs and blue dragons in the middle. The bottom of the dishes are marked “Made in China,” and there are Chinese characters above the mark. Can you tell me something about these dishes?

A: Although this type of porcelain is sometimes called “rice” porcelain, it’s not made with rice. The porcelain is pierced to make rice-shaped holes before the first firing. Later the holes are filled with glaze and the piece is refired, creating the translucent rice-like appearance. “Rice porcelain” was first made in China in the 1300s, but the technique may have originated in Persia more than 1,000 years ago. Rice porcelain also has been made in modern times. The words “Made in” on your dinnerware indicate that your dishes were made after 1915. A 20th-century rice porcelain dinner plate sells for about $10 to $15.

Q: I own an Orphan Annie child’s plate with drawings of Annie in each of the three sections. It’s marked on the back, “Copyright 1935 King Features Syndicate Inc., Made in Japan.” I’m a little confused, though, because Annie and her dog are identified in one drawing as “Little Annie Rooney and Zero,” not “Little Orphan Annie and Sandy.” She has straight brown hair, not red curly hair, and her dog is white, not light brown.

A: No wonder you’re confused. The comic character pictured on your plate is not Orphan Annie, the famous “star” of a Chicago Tribune comic strip that ran from 1894 to 1968. Annie Rooney was the main character in a different comic strip titled “Little Annie Rooney” and syndicated by King Features. The Annie Rooney strip, based on a song and movie character but obviously meant to compete with the Orphan Annie strip, ran from 1927 to 1966 – but it never became as well-known as Orphan Annie. Japanese manufacturers exported countless children’s dishes to the United States during the 1920s and ’30s. Those that feature Disney characters are probably the most valuable. Your sectional plate, called a grill plate, would sell for about $25.

Tip: Do not store scrapbooks or other paper items on unlined wooden shelves. The acid in wood is harmful to paper, textiles and many plastics. Line the shelves with acid-free paper.

Ralph and Terry Kovel, syndicated newspaper columnists, best-selling authors, avid collectors and national authorities on antiques, hosted the HGTV series Flea Market Finds with the Kovels. Watch the Kovels’ HGTV shows to become an expert on almost anything you see at a flea market. DVD sets of Seasons 1 and 2 (12 episodes each, plus a DVD of the final episodes of Seasons 1-4.) are available online at KovelsOnlineStore.com for $59.90 plus $4.95 postage; by phone at 800-303-1996; or by mail sent to Kovels, P.O. Box 22900, Beachwood, OH 44122. 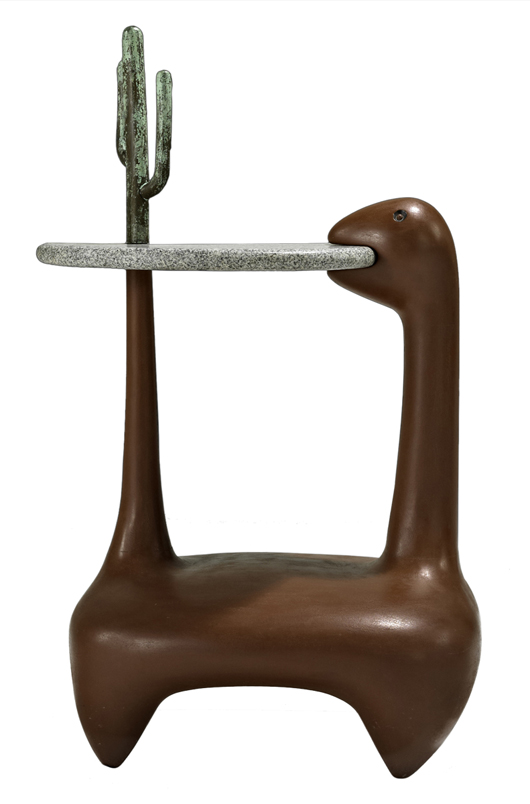 ‘Arizona’ is the name of this unusual side table made in 1986. It sold for $23,750 at an auction of 20th-century art and antiques held at Rago Arts & Auction Center in 2012. The table is made of painted wood, granite and copper. It is marked