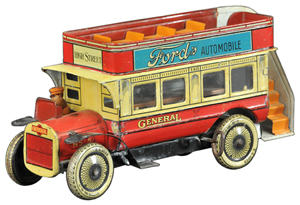 Double-decker buses are still used, but this tin toy bus was made in the 1930s and looks old-fashioned. The 9 1/2-inch German toy auctioned for $2,006 at Bertoia Auctions in Vineland, N.J.

Children like to play with toys that are replicas of things used in everyday life. They also like toys that move and make noise, so for centuries toymakers have created transportation toys. There are very old toys shaped like chariots, stagecoaches and canoes. But by the late 1800s and early 1900s, new developments like trains, cars, buses, motorcycles and bikes, as well as airplanes, balloons, blimps, helicopters and imaginary flying saucers and spaceships, became favorites.

Gunthermann was a German company that manufactured toys from 1877 to 1965. It made many of the toy vehicles wanted by today’s collectors. In September 2012, a tin double-decker toy bus made in the 1930s – a copy of a full-size bus of the day – sold at a Bertoia auction in New Jersey. It has an ad for “Ford’s Automobile” on the top, a street name, “High Street,” on the front, and “General,” the name of the bus company, on the sides and front. The orange and red combination of colors may be a bit imaginative, but the bus has realistic parts, a rear stairwell, upper-deck bench seating and a driver. It moves by a windup clockwork mechanism. The 9 1/2-inch toy, part of a well-known collection, sold for $2,006.

Q: My plastic-and-metal Mickey Mouse tea set is in its original box and has never been opened. It has four plates, four cups and saucers, four sets of flatware and a teapot. The box is labeled “Wolverine Toys, Division of Spang Inc., Walt Disney Product.” I paid $50 for the set a few years ago at a Midwestern antiques shop. What is the set worth today?

A: Your Disneyana tea set was made after 1968, the year Wolverine Toy Co. of Pittsburgh was purchased by Spang Industries of Butler, Pa. The company moved operations to Arkansas in 1971. Disney tea sets, even plastic ones made in the 1970s, are wanted by collectors. Yours could sell today for $100 to $150.

Q: I’m considering buying an oak roll-top desk made by Grand Rapids Desk Co. It had been painted black but has been restored to its original oak finish. The hardware is not original, except for the lock that’s marked “1887, Grand Rapids Desk Co.” The desk is 41 inches high, 40 inches wide and 18 inches deep. The asking price is $600. Is that too much?

A: So many furniture companies were based in Grand Rapids, Mich., by the 1920s that the city was called “The Furniture Capital of America.” It also has been called “Furniture City” because it has been a center of furniture-making since the late 1800s. The Grand Rapids Desk Co. was founded in Grand Rapids in 1893. It moved to Muskegon, Mich., in 1898 after a factory fire, and desks made after 1898 list Muskegon as the city of manufacture. The company changed owners a few times before closing in 1931. A retail price of $600 is fair for a roll-top desk in good condition. Some sell for more.

Q: Many years ago, I was given a battery-operated toy monkey holding a cymbal in each hand. When it’s turned on, the monkey claps the cymbals together, and when it’s tapped on the head, it stops clapping and makes a squealing noise. Then it goes back to clapping the cymbals again. It’s about 10 inches high. How old is it and is it worth anything?

A: Your cymbal-playing monkey was made in Japan from the 1950s into the ’70s by a company named “C-K.” The toy is called “Musical Jolly Chimp.” It was a popular toy and similar versions were made by other companies. The cymbal-playing monkey even appeared in the movie “Toy Story 3.” The value of your toy is $150 to $300, depending on its condition. The original box adds value.

Q: I just read your column about vintage slot machines. I own a similar countertop machine that’s still in its original box. The silver-colored metal nameplate on the front of the blue machine states it’s an “Atom Ball Gum Vendor.” Embossed on the top are the words, “Win a carton, 10 packs of cigarettes, line up 3 of a kind.” If you insert a dime, the three small windows on the top show spinning images of cigarette brands. If the three line up with the same brand, a customer won a box of cigarettes. If they didn’t line up, all you got was a gumball. My dad placed machines like this in bars and nightclubs in Iowa. The machines were bolted to countertops, and every so often I would go with him to refill the gumballs and remove the dimes. When the gambling machines were outlawed, he had to get rid of them so he dumped them in the river. But I hid this one in the attic. What is it worth?

A: Your “trade stimulator” was made in 1949 by Groetchen Tool & Manufacturing Co. of Chicago. It’s exactly like the company’s Imp machine, introduced in 1940. But the dawn of the atomic age after World War II meant that a lot of things were renamed “Atom” or “Atomic.” Trade stimulators, which made money for shop owners, were banned in many states even before the federal ban in 1951. But vintage machines can be legally bought and sold in many states now. Just be sure to check your own state’s laws before you sell. Your Atom machine is valued at about $165. But with the original box, it could sell for much more.

Tip: Andirons get tarnished and covered with resin from smoke, so they should be regularly cleaned with liquid metal polish and 0000-grade steel wool.

Available now. The best book to own if you want to buy, sell or collect – and if you order now, you’ll receive a copy with the author’s autograph. The new Kovels’ Antiques & Collectibles Price Guide, 2013, 45th edition, is your most accurate source for current prices. This large-size paperback has more than 2,500 color photographs and 40,000 up-to-date prices for more than 775 categories of antiques and collectibles. You’ll also find hundreds of factory histories and marks, a report on the record prices of the year, plus helpful sidebars and tips about buying, selling, collecting and preserving your treasures. Available online at Kovelsonlinestore.com; by phone at 800-303-1996; at your bookstore; or send $27.95 plus $4.95 postage to Price Book, P.O. Box 22900, Beachwood, OH 44122. 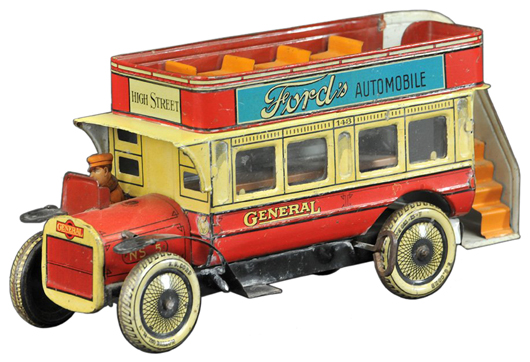 Double-decker buses are still used, but this tin toy bus was made in the 1930s and looks old-fashioned. The 9 1/2-inch German toy auctioned for $2,006 at Bertoia Auctions in Vineland, N.J.

Looters steal $200,000 in coins after hoarder’s death
Scroll to top