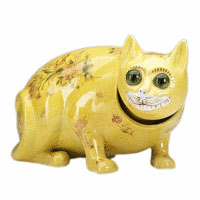 Any Galle pottery cat is amusing and unusual. This yellow cat has large round glass eyes and small transfer decorations on its body. Even with a hairline crack, the 5 1/2- by 10- inch figure sold for $800 at a November Rago auction in Lambertville, N.J.

Cats are favored over dogs when it comes to collecting. Those who devote sales to paintings, figurines and other depictions of animals find that sales are better for cats, then dogs, then horses, then chickens and roosters, followed by pigs and maybe frogs. But birds are probably the most popular of all. Emile Galle (1846-1904) is best known as a maker of cameo glass. He opened his own factory in Nancy, France, in 1873 and made cameo glass, enamel-decorated glass and art glass in the Art Nouveau style. But he also made unusual pottery from about 1874 to 1904. Galle pottery is not as well-known as Galle glass, and it is rare. Collectors today like all Galle pottery, but most intriguing are his many figures of cats, each about 10 inches long. The cats have human expressions and are decorated with flowers and other designs. The cats sell today for more than $500 if in perfect condition.

Q: I have a J.K. Rishel Furniture Co. desk that must be more than 50 years old. Please give me some information about the company.

A: The J.K. Rishel Furniture Co. was founded in Hughesville, Pa., in the late 1800s. By the early 1900s, the company was headquartered in Williamsport, Pa. Rishel continued making furniture until at least the mid-20th century. Some Rishel pieces, particularly those 100 years old or more, sell for thousands of dollars. Pieces from the mid-1900s attract less interest and much lower prices.

Q: I have a strange metal “picture” made with bullet holes. I have heard that this type of bullet picture might be valuable. Can you tell me something about it?

A: Bullet drawings are made by shooting bullet holes into a target. The technique was made popular by Texan Adolph Toepperwein (1869-1962) in the early to mid 1900s. After a brief stint as a newspaper cartoonist, he performed as a marksman on the vaudeville circuit and later in a traveling circus. In 1901 he became an exhibition shooter for the Winchester Repeating Arms Co. He and his wife, Plinky, toured the country giving shooting exhibitions for more than 40 years. He ended each show by “drawing” an Indian’s head with bullet holes shot into a board. Silhouettes of indians, cowboys, cartoon characters and Uncle Sam were made by several hundred bullet holes spaced a half-inch apart on a sheet of tin. Other shooters also made bullet drawings, but those made on tin by Toepperwein bring the highest prices. His pictures sell for several hundred to a few thousand dollars.

Q: My clock was made by the Prentiss Clock Improvement Co. of New York. It was hung in the Phillipsburg, N.J., railroad station in1929. It has square openings at the bottom that were supposed to display the month and date, but the printed pieces are missing. I would appreciate any information about this clock. Where can I find the calendar parts?

A: Calendar clocks have dials or hands that indicate the month, date and day of the week, and sometimes the phase of the moon. They were invented in Europe in the 1600s. John Hawes of Ithaca, N.Y., was granted the first patent for a calendar clock in 1853. Calendar clocks were popular in the United States from the 1860s until the early 1900s. Prentiss Clock Co. was founded in New York in about 1870. It became Prentiss Calendar & Time Co. in about 1880 and Prentiss Clock Improvement Co. in 1897. Prentiss Improvement Clock Co. was known for its calendar clocks and long-running clocks. Some could run for 60 days before being rewound. Most small clock companies like Prentiss bought clock movements from Seth Thomas and other well-known clock companies. Companies that supply parts for clocks are listed in the directory on our website, Kovels.com. You also can try searching the Internet for companies that provide replica parts for old clocks. Type the words “calendar clock parts” into a search engine.

Q: A friend gave me a demitasse set she received as a wedding gift in 1946. She never used the set. The set’s only identification is a paper label on the coffeepot that says “Brad Keeler Artwares.” The only other Keeler pieces I can find online are animal and bird sculptures and platters with lobster handles. Can you give me more information about dishes he designed?

A: Brad Keeler (1913-1952) started modeling clay figures, mostly birds, in the mid-1930s. By 1939 he was working out of a ceramics studio in his family’s garage in Glendale, Calif. Within a short time, the popularity of his lifelike bird figurines led him to lease space at Evan K. Shaw’s American Pottery Co. in Los Angeles. Shaw liked Keeler’s work so much he included Keeler’s figures in the giftware line he sold to the trade. After Shaw’s pottery burned down in 1946, Keeler opened his own plant in Los Angeles and expanded his production lines to include vases, bowls, ashtrays and tea sets. So your set dates from 1946, the year your friend received it as a gift. Keeler died of a heart attack in 1952 and his business closed the following year. Sets of Keeler dishes do not interest collectors as much as his animal figures and lobster dishes.

Tip: The more a charm for a charm bracelet moves or makes noise, the higher the price.

New! Contemporary, modern and mid-century ceramics made since 1950 are among the hottest collectibles today. Our special report Kovels’ Buyers’ Guide to Modern Ceramics: Mid-Century to Contemporary” identifies important pottery by American and European makers. Includes more than 65 factories and 70 studio artists, each with a mark and dates. Works by major makers, including Claude Conover, Guido Gambone and Lucie Rie, as well as potteries like Gustavsberg, Metlox and Sascha Brastoff, are shown in color photos. Find the “sleepers” at house sales and flea markets. Special Report, 2010, 8 1/2 x 5 1/2 in., 64 pages. Available only from Kovels. Order by phone at 800-303-1996; online at Kovels.com; or send $25 plus $4.95 postage and handling to Kovels, Box 22900, Beachwood, OH 44122.