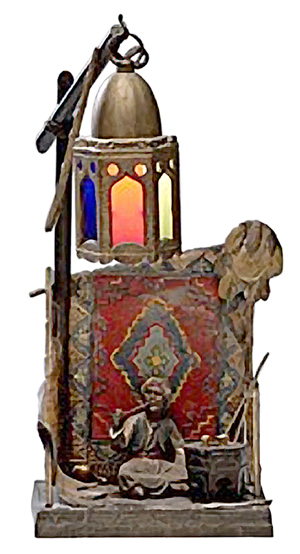 This cold-painted figure depicts an Arab man with a pipe seated in front of a rug and a lit tower. The lamp is 13 inches high and 6 inches wide. It’s unmarked but still sold in October 2011 for $763 at Cowan’s Auctions in Cincinnati.

What is “cold-painted bronze”? The term is used online to describe colorful bronze or spelter figures, but almost no one explains what it means.

One online forum offers dozens of answers, all wrong, because the bloggers are contemporary artists familiar with a modern process called “cold patina.” The artist covers the metal with chemicals like cupric chloride and ammonium chloride to create a bluish green patina. The finish will wear off unless you cover it with a fixative and then maybe wax.

Cold-painting was a technique popular during the Art Deco period, which started in the 1920s. Bronze figures, most of them made in Vienna, were actually covered with enamel paint. The result is a very colorful figure or lamp. Small Viennese animals and other figures, often under 2 inches tall, were especially popular and sell today for $100 to $200. Art Deco figurines of women, often dancing, were made of bronze or spelter (white metal) for the main part, ivory for the hands and faces. Again, the metal part was colored with a special paint. Another group of cold-painted bronzes were scenes depicting Arabs in tents or on camels. Many had a small light bulb inside and were used as night-lights or lamps. The best known of these figures were made by “Namgreb,” the mark used by Franz Bergman (1861-1936), who reversed his name to make it sound more exotic. Signed pieces sell for hundreds of dollars today.

If you have a cold-painted bronze or spelter figure, be careful. The paint chips easily. Do not use metal polish or any chemical cleaner on them. Just dust or wipe with a damp cloth.

Q: I was given an original invitation to the inauguration of President John Fitzgerald Kennedy and Vice President Lyndon Baines Johnson dated Jan. 20, 1961. I would like to know if it’s worth anything and who might want it.

A: The inauguration of President Kennedy and Vice President Johnson was held on the East Portico of the U.S. Capitol. Since 1981, most inaugurations have been held on the West Front of the Capitol. The 1961 inauguration included several “firsts,” including the first Catholic president-elect, the first time both parents of the president-elect attended their son’s inauguration and the first time a poet (Robert Frost) participated in the ceremony. It was also the first time the parade was televised in color and the first time Army flame-throwers were used to clear snow from the path of the parade. Kennedy was the last president to wear a stovepipe hat to his inauguration. Some invitations include the words “Please present the enclosed card of admission,” but many more were issued to the public as souvenirs. Invitations to the 1961 inauguration have sold for $60 to $150 or more. Those with the original mailer are worth more than those without it.

Q: We have a 10-piece walnut dining room set made by the Phoenix Furniture Co. of Grand Rapids, Mich. The heavy Victorian-style set includes a table with three leaves and six chairs, buffet, server and china closet. Each piece has either machine carvings or applied decorations. Is the set antique?

A: The Phoenix Furniture Co. was founded in Grand Rapids in 1872. The company was acquired by Robert Irwin in 1911. He merged Phoenix with another furniture company in 1919 to form the Robert W. Irwin Co. But the Phoenix Furniture Co. name continued to be used on its original lines until at least 1926. Pieces in various revival styles were manufactured by Phoenix or Irwin from about 1890 until the late 1910s.

Q: I have a Star Trek classic brass belt buckle that reads “Star Trek Lives!” on the top and pictures the USS Enterprise in the middle of a star field. On the bottom right it reads, “These are the voyages. . .” The back reads “Tiffany Studio, New York.” Can you give me some information on this?

A: Brass buckles marked “Tiffany” have been around since the 1960s, but Tiffany did not make them. Star Trek buckles like yours show up for sale online for high prices and very low prices, but they usually sell for $5 or $10. Other common buckles supposedly made by Tiffany include Wells Fargo buckles and Civil War uniform buckles. They were made to look old but date from no earlier than the 1960s. The original “Star Trek” TV series ran from 1966 through 1969. It was followed by an animated TV series, three TV sequels and a TV prequel. The first “Star Trek” movie was released in 1979, and 10 others followed, the most recent in 2009. Production will begin on another sequel in 2012. Value of your buckle: under $20.

Q: I inherited eight life-size copper figures of insects, lobsters, shrimp, crabs and crayfish. They were all made in Japan years ago and have Japanese signatures on them. Their arms, legs and other body parts move on hinges. Can you tell me something about them and if they’re valuable?

A: You may have a group of valuable ornamental figurines called “jizai okimono.” They are realistic metal figures of animals. Experts believe they were first made by armor craftsmen in Japan in the 18th century. They are still being made. Depending on condition, artistry and age, a single figure can sell for more than $1,000.

Tip: If your old ivory-beaded necklace is becoming yellow, do not clean it. Yellowing is just a sign of age.


Sign up for our weekly email, “Kovels Komments.” It includes the latest news, tips and questions and is free if you register on our website. Kovels.com has lists of publications, clubs, appraisers, auction houses, people who sell parts or repair antiques and more. Kovels.com adds to the information in this column and helps you find useful sources needed by collectors.

New! Contemporary, modern and mid-century ceramics made since 1950 are among the hottest collectibles today. Our special report, “Kovels’ Buyers’ Guide to Modern Ceramics: Mid-Century to Contemporary” identifies important pottery by American and European makers. Includes more than 65 factories and 70 studio artists, each with a mark and dates. Works by major makers, including Claude Conover, Guido Gambone and Lucie Rie – as well as potteries like Gustavsberg, Metlox and Sascha Brastoff, are shown in color photos. Find the “sleepers” at house sales and flea markets. Special Report, 2010, 8 1/2 x 5 1/2 inches, 64 pp. Available only from Kovels. Order by phone at 800-303-1996; online at Kovels.com; or send $25 plus $4.95 postage and handling to Kovels, Box 22900, Beachwood, OH 44122. 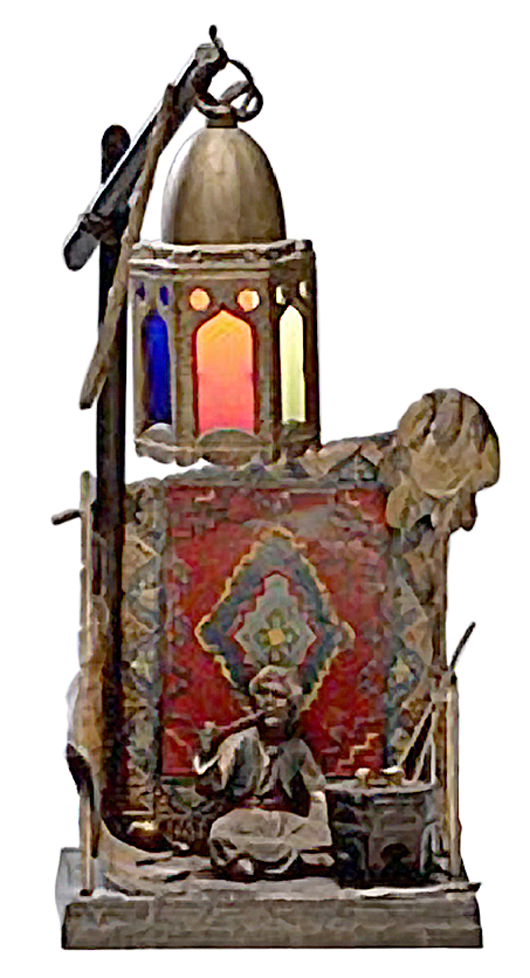 This cold-painted figure depicts an Arab man with a pipe seated in front of a rug and a lit tower. The lamp is 13 inches high and 6 inches wide. It’s unmarked but still sold in October 2011 for $763 at Cowan’s Auctions in Cincinnati.